An 18-metre high “flower tower” has been hung from the St Mark’s, Warwick bell tower by the rural fire brigade, backed by nearly 100 supporters from Northampton Shire in England to Queensland’s Innisfail.

The flower tower is an initiative of the St Mark’s Women’s Guild as part of this year’s Jumpers and Jazz in July festival in Warwick, which is running from 21 to 31 July.

St Mark’s Women’s Guild member Elaine Stewart said the 12-month project exceeded all expectations, bringing so many people together with a shared purpose.

“The pride in the resulting masterpiece is immense, but so much more is the collaborative spirit that went into its making,” she said.

“It gave so many something to focus on and a sense of achievement, particularly during COVID times when many were isolated and alone at home.

“We thank all who contributed through the donation of materials, labour and craft and remember two of our members who were so proud of their involvement; however, unfortunately, aren’t with us today to see the finished product.

“The piece reflects so many people’s stories, with one Toowoomba lady making 90 flowers in memory of her late father who was a former St Mark’s parishioner who passed away at 89 years of age.” 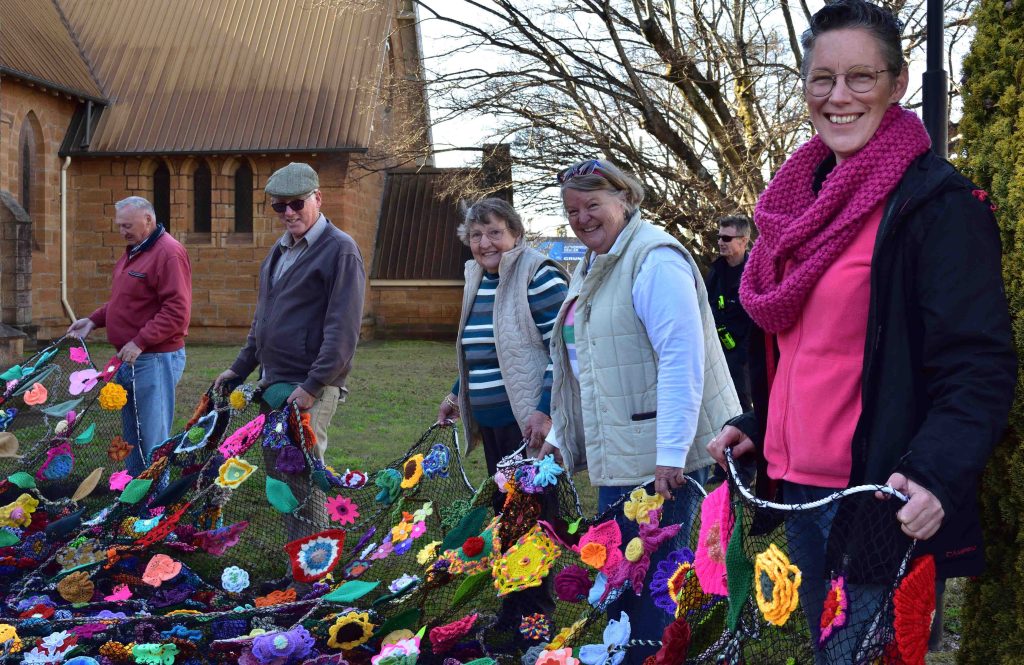 St Mark’s, Warwick community members waiting for the flower tower to be hoisted and hung on the bell tower in July 2022, including St Mark’s, Warwick rector The Ven. Lizzie Gaitskell and President of the St Mark’s Women’s Guild Winsome Anderson

The flower tower idea originated from St Margaret of Antioch Church in Barley, England, which was created to raise funds for renovations and upkeep.

It grew from a shared activity between regional Anglican parishes to a widespread collaborative effort that saw teenagers through to nonagenarians knitting together, including from community and church groups, schools and aged care organisations.

The abundance of colour is the hallmark of the urban Warwick artwork, with its beauty the result of diverse genders, religions, cultures and cross-generations contributing their crafts.

The local fire brigade assisted with the carefully planned hanging of more than 2,200 knitted, crocheted and material flowers and leaves, which proved to be a logistical exercise and small engineering feat.

Flowers for the tower were handmade all over Queensland, and as far as Northampton Shire in England.

Warwick residents and visitors are invited to view the flower tower day and night, during the festival.

Onlookers are encouraged to get up close to see the level of detail in the flowers, with some pieces featuring beetles, butterflies and buttons.

Two large crosses have been incorporated on each side of the artwork as symbols of the parish’s faith and community outreach.

The Jumpers and Jazz in July festival has been described as “Queensland’s quirkiest yarnbombing and jazz winter festival”.

Editor’s note 29/07/2022: Text updated to note where the handmade flowers were created.