Almost 100 St Margaret’s Anglican Girls School students and six teachers had their ponytails cut recently, while the school’s two dogs were clipped and coiffed, raising over $90,000 for cancer research and support.

The $90,000 raised adds to an eight-year tally that now exceeds half a million dollars in donations to the Cancer Council Queensland and the Minotti Trust, which was established to support the family of a St Margaret’s staff member who lost her life to cancer.

As for the ponytails, they have been made into countless wigs for patients suffering treatment hair loss.

School Co-Captain Holly Marchant said that her highlight was seeing the impact the initiative had on younger students.

“A specific highlight for me was watching the excitement amongst the audience during this assembly when the raffle winners were cutting the Prefects’ hair.

“I could see the younger girls’ eyes light up, as they were inspired and enthused by the sacrifice the Prefects were making.

“I even heard some of the girls talking about what it will be like when they cut their hair in Year 12.

“To me this exemplified the enduring legacy of the Ponytail Project at St Margaret’s and throughout Australia, as it continues to grow in size and impact each year.

“While chopping off my ponytail was nerve-wracking and definitely outside of my comfort zone, knowing that my donation will help others to feel more confident in themselves is an inexplicable feeling.

“It was such a small sacrifice when you think about the positive impact that organisations such as The Cancer Council Queensland and the Minotti Trust have.” 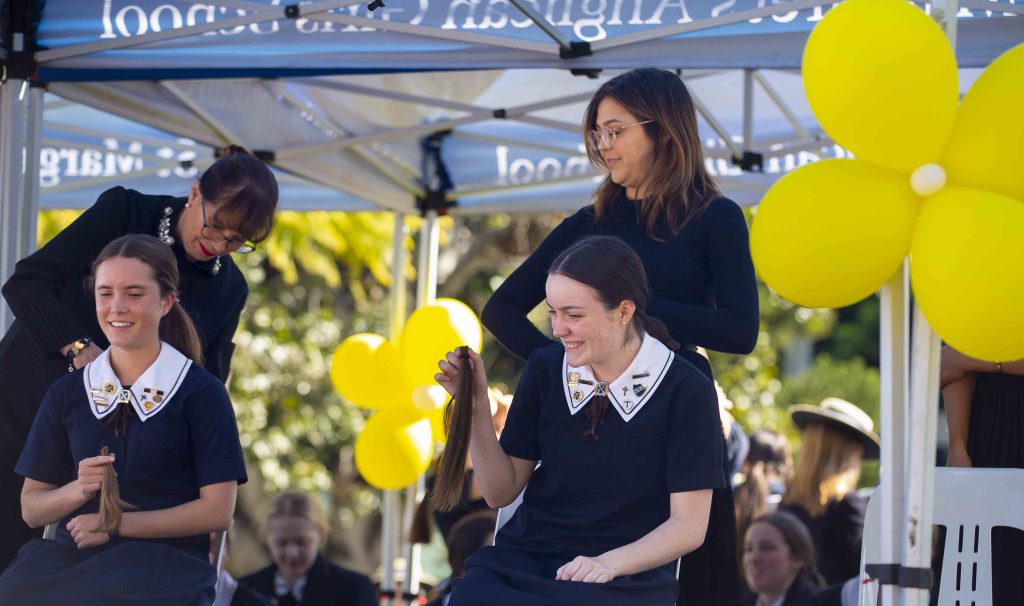 The St Margaret’s school dog, Luna, and the Head of Primary School’s dog, Daisy, joined in for the first time this year, with both cavoodles clipped and coiffed by local groomer CC’s Pampered Pups.

Luna raised over $700 towards the overall fundraising total.

The students’ ponytails were cut by hairdressers Ink for Hair.

Principal Ros Curtis said that giving is a part of the St Margaret’s culture.

“We encourage our students to develop the practice of lifelong giving through philanthropic activities like the Ponytail Project,” Ms Curtis said.

“These opportunities empower the girls to experience how their actions can make a positive difference in the lives of others and inspire them to continue on a journey of giving into their adult lives.

“I am immensely proud of their willingness to do this in today’s age of technology and social media, where much emphasis can be placed on a young woman’s appearance.”

The Ponytail Project was first launched in 2015 by four St Margaret’s students after a member of the school community was diagnosed with cancer.

The students were so moved to help, they launched the student-led fundraising initiative called the Ponytail Project, believing that cutting off their ponytails was a small price to pay to support those impacted by cancer.

Sadly, in 2016, St Margaret’s students had even more reason to support the initiative after the loss of one of their beloved teachers, who was also a past student, to cancer.

The groundswell of support in the initiative’s first two years led the Ponytail Project to become an annual campaign for the St Margaret’s community.

In 2019, the movement was encouraged in schools state-wide after being adopted by Cancer Council Queensland.

“We are so grateful to St Margaret’s for their unparalleled support of the Ponytail Project since bringing it to life in 2015,” Ms Bush said.

“Every ponytail chopped makes an incredible impact, with funds raised going towards lifesaving cancer research and essential support services such as counselling, accommodation and transport services for people living with cancer.”