A small part of local Anglican Church history returned to Brisbane this month – after 70 years in England.

The pectoral cross of the late The Rev’d Canon David John Garland (the main architect and advocate for Anzac Day) was showcased recently across Brisbane by Peter Collins, the Secretary of the Canon Garland Memorial Society. The cross was bequeathed by Canon Garland to his nephew, Richard Charles Ratcliff, in England. The cross’ permanent home is now in St George’s Church (Whyke) in the Anglican Diocese of Chichester. 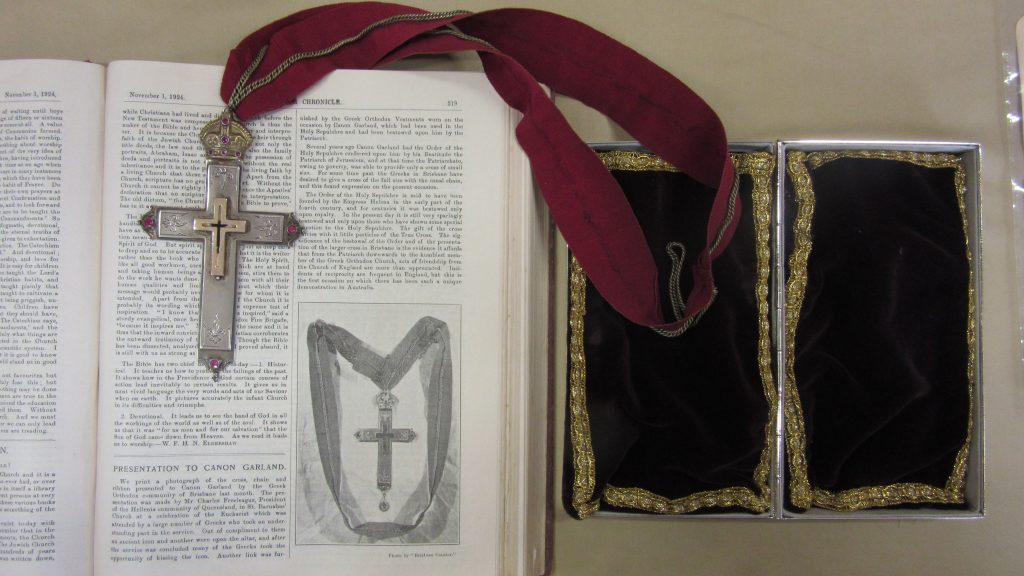 As a result, in 1920, Canon Garland was conferred the Order of the Holy Sepulchre by the Patriarch of Jerusalem, of the Greek Orthodox Church. As part of his investiture, he received a small gold cross – believed to hold splinters of the cross upon which Jesus was crucified. At the time, the Patriarchate was only able to afford a small cross, so in 1924 the small cross was reset, with rubies, into a full-size pectoral cross, and presented back to Canon Garland. The resetting was funded by the Greek Orthodox Community of South Brisbane. The Church Chronicle (November 1, 1924, p.219) says that:

‘The Order of the Holy Sepulchre is said to have been founded by Empress Helena in the early part of the fourth century, and for centuries it was bestowed only upon royalty…The gift of the cross carries with it little particles of the True Cross.’

In October this year, relatives of Ratcliff brought the cross over to Queensland during their holiday. During its visit, the cross was reunited with Canon Garland’s vestments (held at the Queensland Museum), attended Synod at Anglican Church Grammar School, and was blessed and appreciated at many church services, including at All Saints’ Anglican Church, Wickham Terrace; St Mary’s Anglican Church, Kangaroo Point; St Barnabas’ Anglican Church, Ithaca; the Greek Orthodox Church of St George, South Brisbane; and, St Nicholas Russian Orthodox Cathedral, Kangaroo Point. The cross also had time to visit the Records and Archives Centre in Church House on Ann Street, where it was placed next to a photograph and article of itself, which was published in the November 1924 edition of The Church Chronicle. 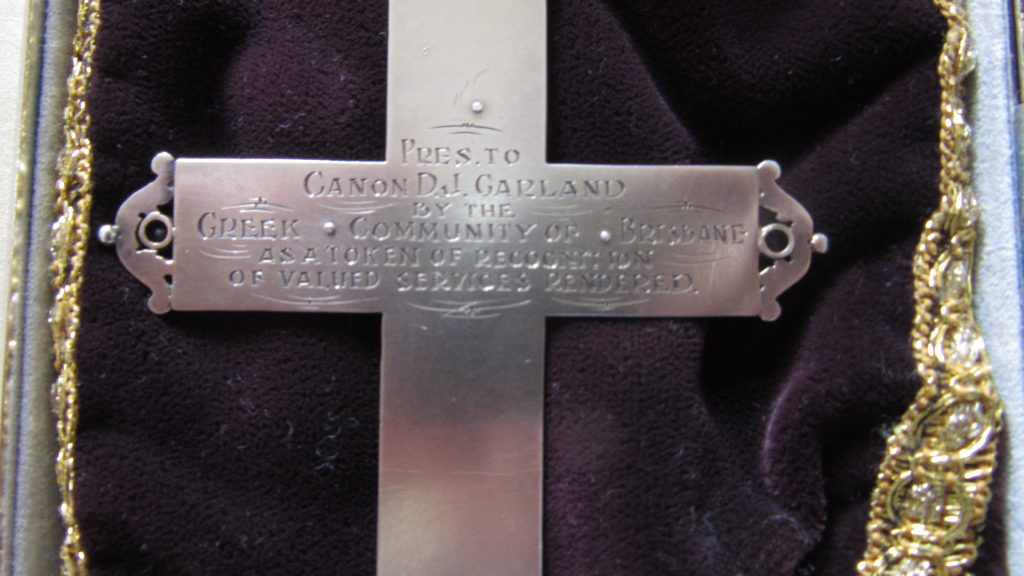 Inscription on the back of the pectoral cross, noting the resetting of the smaller cross onto the larger cross by the appreciative Greek Community of Brisbane

The cross has now returned to Chichester, and its visit to Brisbane will be long remembered for highlighting the enormous impact that Canon Garland had on the Church, both in Queensland and internationally.