It’s a colourful yet weathered piece of framed cloth affixed to the wall of St John’s Anglican Cathedral, Brisbane.

Yet few people know the story behind it or that it rewrites Australian war history, most notably the final chapter in the famous and fateful Anzac campaign at Gallipoli in December 1915.

The embroidered red, blue and gold Union Jack flag was the last Australian ensign to be flown at Anzac Cove, with a new book outlining the sequence of events that led to a Brisbane Anglican chaplain flying the flag in the final hours of the evacuation.

The historic flag and national treasure had been taken to Gallipoli by Brisbane Anglican chaplain, Captain The Rev’d Alexander Maxwell, who at the time of his enlistment in 1915 was the parish priest at Sandgate.

The incredible story, told fully for the first time, is contained in a new book St John’s Cathedral, Brisbane and the Anzac Legend, launched this week at St John‘s Cathedral by Queensland Governor, His Excellency the Hon Paul de Jersey AC.

The book, launched 103 years to the day from the Anzac evacuation, also portrays in glossy colour all of the memorials to Australia’s service personnel and artefacts collected over more than 100 years, housed within the walls of St John’s Cathedral. These include mosaics, windows, a crucifix, many flags and a stone of remembrance.

New research in the book dispels the commonly-held historical view – as depicted at the Australian War Memorial – that Australia’s official war correspondent and historian C.E.W (Charles) Bean, was the last person to remove the final flag from Gallipoli on 18 December. In fact, Bean’s action was at least 24 hours before The Rev’d Maxwell took his flag ashore and brandished it throughout the cove.

During World War I, 22 clergy from the Brisbane Anglican Diocese served as chaplains in the First Australian Imperial Force (AIF).

The Rev’d Maxwell was the oldest registered chaplain at Gallipoli – aged 59 when he enlisted – which was highly unusual given that the age limits for chaplains was 52 if they were just staying on troop ships and not venturing ashore.

He packed in his war kitbag a flag he had used in 1903 to commemorate the centenary of European settlement in Victoria.

Tradition dictated that he use the flag as an altar cloth for Eucharist services and on 19 December, 1915, The Rev’d Maxwell had the flag with him at Anzac Cove while he was assisting to evacuate the sick and wounded in the most extraordinary retreat in Australian military history. It nearly cost him his life.

That afternoon, as 20,000 soldiers were in the final stages of implementing a tense but brilliantly executed withdrawal from Gallipoli, The Rev’d Maxwell was returning from Hell Spit Cemetery (one of 20 gravesites established by the Anzacs on the peninsula) when he was fired upon three times by the massive Turkish guns, which rained hell down upon enemy within its deadly reach.

The shells burst above Maxwell’s head and a stray piece of flying shrapnel grazed one of his pockets, narrowly missing his heart.

The book’s author and historian Denzil Scrivens said chaplains played a vital role during the war in providing support and comfort to Australian servicemen in the face of horrific wound, grief, despair and suffering.

“We think Maxwell must have obtained special exemption to enlist given his age, which was almost twice that of many other padres,” Mr Scrivens said.

“The Turkish gunners were in the habit of shelling burial parties at Anzac Cove, so The Rev’d Maxwell took considerable risk in visiting the cemetery with his flag on that final day at Anzac Cove.”

The Anzac pre-Christmas evacuation, was one of the most remarkable episodes in the Gallipoli campaign when troops were successfully evacuated under the nose of the enemy without any loss of life.

After The Rev’d Maxwell’s return from the war, he showed the flag in 1920 to General Sir William Birdwood, who had been commander of the Anzac troops at Gallipoli. The General was visiting Brisbane and was so impressed with the flag and its story that he signed his name on its top right corner. The Rev’d Maxwell presented the flag to St John’s Cathedral on Anzac Day, 1929 and it proudly hangs inside the Cathedral.

Past president of the United Services club, Brigadier Ray McNab (Rtd) said the research and story behind the Cathedral flag and its display in the final day Gallipoli evacuation was of “great historical significance”.

“Until now, it was believed that Charles Bean carried the last flag by an Australian at Anzac Cove and this book adds greater depth to one of the most famous campaigns in our country’s history,” Brig McNab said.

“Chaplains are worth their weight in gold in times of war and The Rev‘d Maxwell showed a great degree of personal courage and commitment to his men and his job in venturing ashore to tend to the wounded and dying.

“We are fortunate indeed to have the flag today as a reminder of those gruesome days and the courage and endurance of the troops and the chaplains who supported them.”

St John’s Cathedral, Brisbane and the Anzac Legend also documents the story of Lieutenant-Colonel The Rev’d David Garland, a Canon of the Cathedral and one of the architects of Anzac Day commemorations. He is also credited with initiating the Anzac Day march and the one minute’s silence.

At the launch, Queensland Governor Paul de Jersey said he had not appreciated, until he read Mr Scrivens’ book, the very rich acknowledgement and linkages within the Cathedral of the war efforts.

“This wondrous Cathedral houses many significant memorials to Australians, and their allies, involved in conflicts all over the world – artefacts, flags, regimental colours, plaques, and beautiful stained-glass windows,” the Governor said.

“Denzil’s book, published in the centenary year of the end of World War I, deepens this Cathedral’s connection with the Anzacs even further. His words and illustrations guide us expertly around the Cathedral. 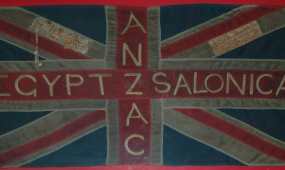 The Gallipoli flag – the discovery of a national treasure

“His detailed descriptions tell us the history and deep significance of each of the memorials. They speak of the devotion to duty, selfless service and often selfless sacrifice that each one represents, without ever glorifying war itself.”

Having discovered the provenance of the Cathedral’s Gallipoli flag – the last flown on the Anzac peninsula – St John’s Cathedral is hoping that it might become a place of pilgrimage for the many young Queenslanders, and others, who visit Anzac Cove and who wish to remember the sacrifice of Australians and New Zealanders in that fateful campaign.

Funding for the publication of the book, St John’s Cathedral, Brisbane and the Anzac Legend, was provided by the Queensland Government through the Queensland Anzac Centenary grants program.

Copies of the book are being provided to 190 high schools in south-east Queensland, with a ‘flipping book’ accessible to all on the Cathedral’s website. The memorials can be viewed at the Cathedral between 9.30 am to 4.30 pm Monday to Saturday, and 11.00 am to 4.30 pm on Sundays. 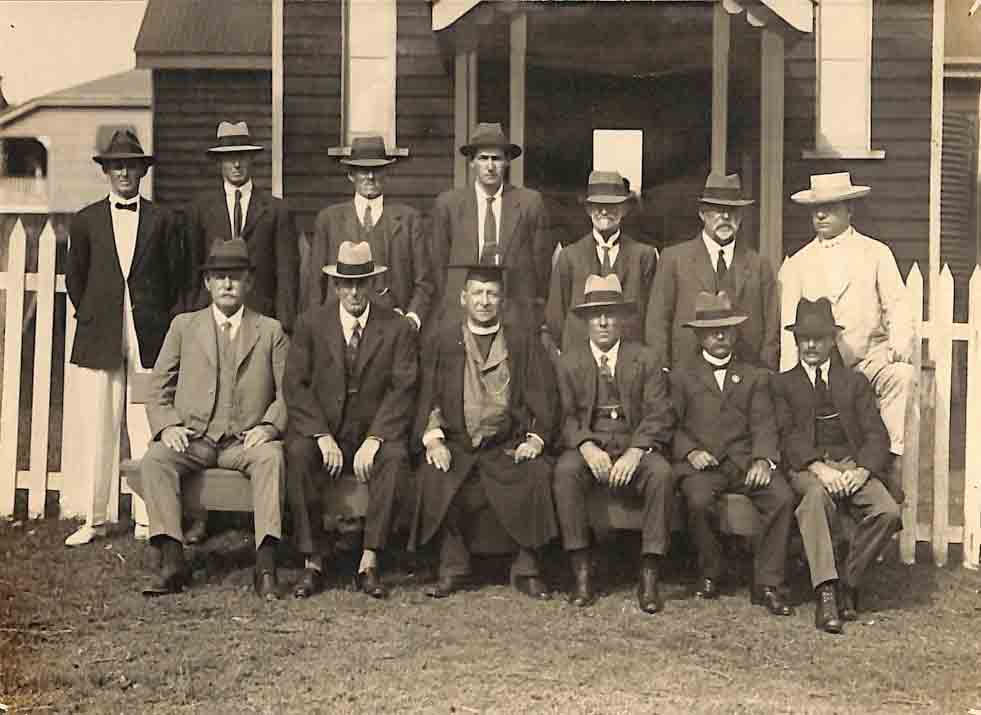 The Rev’d Maxwell, sitting centre front, with The Parochial Council of the Cleveland Parish