In 2017, while the Records and Archives Centre was still situated at Bowen Hills, we were lucky to have a visit from the Sisters of the Society of the Sacred Advent. They visited to do some research and to drop off some items for the Archives collection. Sister Gillian Gardiner handed me a photograph album that had been in the sisters’ possession for decades. Who it belonged to, where it had come from, and why the SSA had possession of it, was a mystery.

As I went through the very old and fragile album, I found, along with scenes from exotic locations and obvious family photographs, a repeated image of one man, a priest. 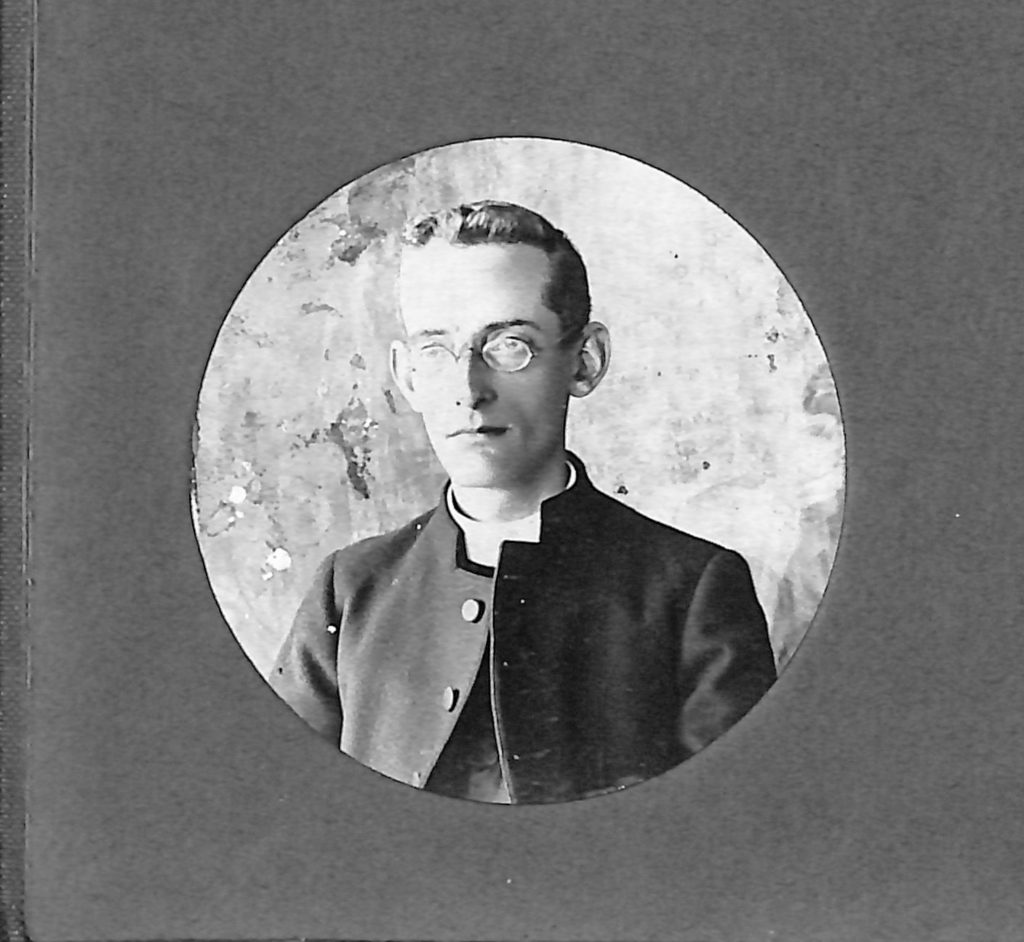 He was a bespectacled and thin young man whose attire could have been Anglican or Roman Catholic. I began to realise that this album belonged to whomever this was. As I continued to leaf through the contents, I found a photograph of this man with other priests. Importantly, in this group of priests, I recognised The Rev’d Canon Thomas (Tommy) Jones and The Reverend Canon Arthur Rivers. This placed the mystery priest in our Diocese. I was getting closer!

The unknown priest, back row (second from left), in the company of The Rev’d Canons Jones and Rivers, seated

I knew that Canon Jones died in 1918, and the image seemed quite early, perhaps even turn of the century. So I began trawling through group photographs of clergy, usually taken at the time of Synod, from 1890-1918. The breakthrough occurred while looking at a picture of clergy in the June 1905 issue of The Church Chronicle. There I recognised the face that I had seen in the album. I excitedly looked down at the names listed and discovered that the album once belonged to ‘The  Rev’d D. Price’. 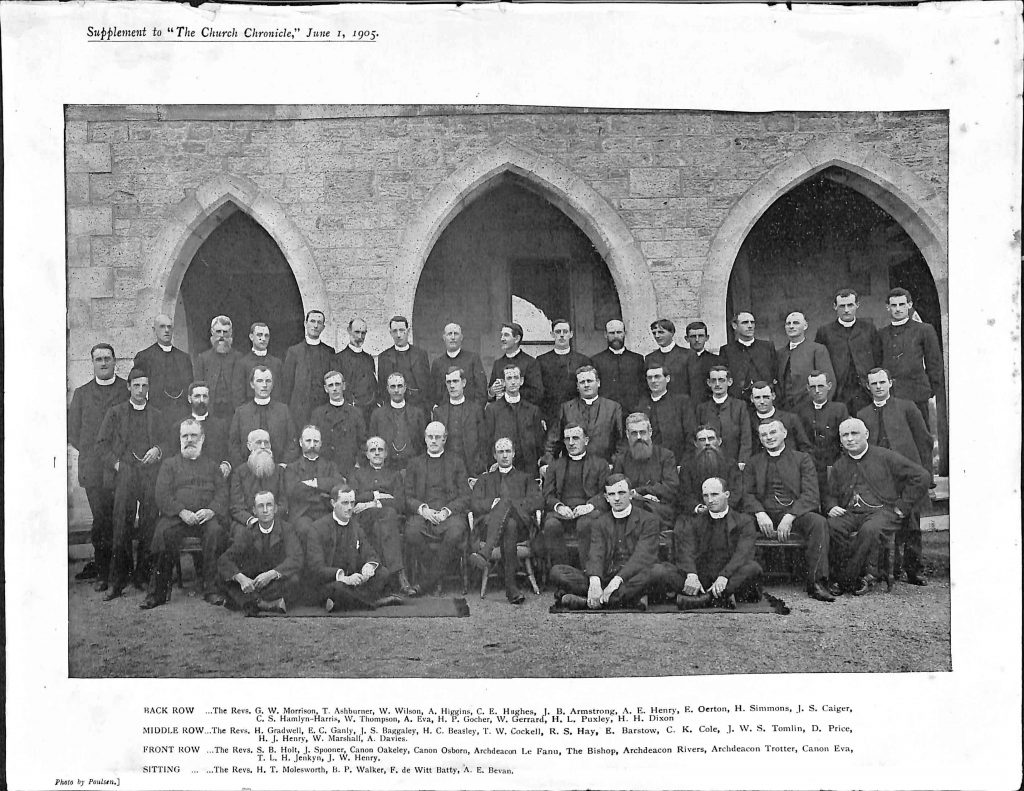 The unknown priest has a name, The Rev’d Douglas Price, middle row, as found in a clergy photograph in the June 1905 Church Chronicle

I consulted a clergy database we use and discovered that The Rev’d Douglas Price had arrived in the Brisbane Diocese, from England, in around 1903. He spent two years as Vice Principal of the Theological College before becoming the incumbent at All Saints Church, Wickham Terrace. So I now knew who owned the album, but why did it end up with the Sisters of the SSA? I had to do some more digging.

In our collection we have a book entitled All Saints’ Church Brisbane 1862 – 1937, a history of the parish written by a D.L. Kissick. In this history I learned more about The Rev’d Douglas Price. He was born into a Quaker family from Birmingham, but had felt a calling to the priesthood after some time in private industry. He studied at Durham University, came to Brisbane in 1903, and was very much an academic at heart. Severe issues arose, said Kissick, when Archbishop Donaldson began to see having All Saints Church so close to the Cathedral as problematic. He hoped the parish would willingly join the Cathedral congregation and, potentially, the land and Church be sold. Price, guided by his parish, did not acquiesce to this notion at all. Kissick asserts that this led Donaldson, who had been hearing rumours of a ‘modernist’ theology being preached by Price, to ask for some sermons of his to review. He determined that these showed ‘evidence of teaching contrary to the doctrines of the Church’, and asked Price to resign in 1911, which Price complied with.

After briefly leaving Brisbane, he was asked to return by many of his old congregation members and set up a movement called ‘Progressive Christianity’ or ‘The Modernist Movement’. For the next five years, he wrote regular periodicals, gave lectures, wrote three novels, and lived in a house he had built, called ‘Puck’s Palace’ in Highgate Hill according to Kissick,. 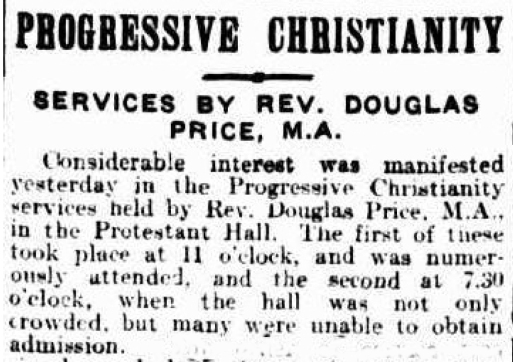 It was at this house, in 1916, that The Rev’d Douglas Price, at the age of 42, was found dead by a friend who had come to visit. He had always been thin and sickly, but it is possible that the death was a suicide. No formal determination was ever reached.

Why did the SSA have the album? On closer inspection of the Kissick book, I found these words, ‘…was chaplain to the Tufnell Home, the Refuge and the Society of the Sacred Advent…’ So I went to a history of the SSA we have in the Archives collection called One Hundred Years of Ministry, and found The Rev’d D. Price, listed as Chaplain to the SSA, from 1904-1911. It seems that on his death, with no family in Brisbane, the SSA helped to clear up and preserve some of his possessions. The album came to them, or was bequeathed to them, at this time. The mystery has been solved!

This is a remarkable album for the successful search it engendered, the turn-of-the-century social importance and illustrations it provides, and as a signpost to a remarkable priest who led an eventful life, with an untimely, perhaps even tragic, death. 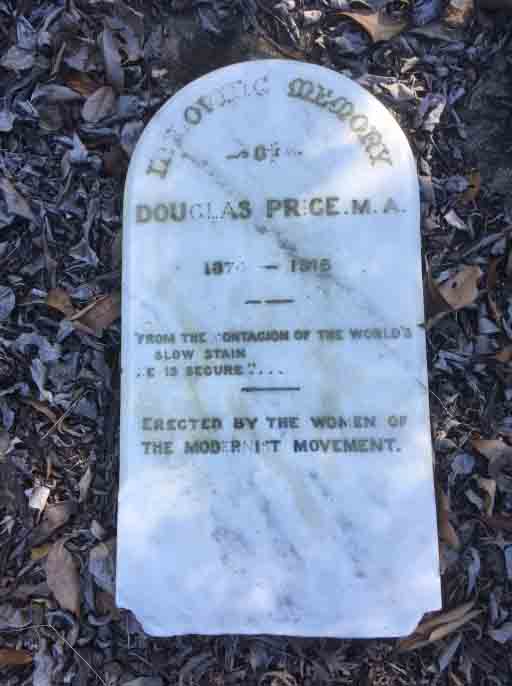