Working and living in the Flinders Ranges was a lesson in survival for us in more ways than one. The Adnyamathanha people have remained, but the Europeans who came to colonise and take their land have all gone. Standing on a hill overlooking the old town of Quorn and gazing north across the Willochra Plains, one sees a vast emptiness punctuated by skeletal strings of dead River Red Gums. These define the long-since dried riverbeds across the plains. On the banks of these rivers small settlements once flourished briefly and then died.

The colonists defied the advice of the South Australian Surveyor General, George Goyder, who from a deep knowledge of past rainfall patterns, determined that it would be foolish to plant crops north of what became known as the Goyder Line – a line drawn to define the limit of land suitable for arable farming. But still, the colonists preferred the conventional wisdom that rain would follow the plough. That is how much of the interior was farmed. Dreams and false information are bad companions.

Today the settlements stand as ghost towns. Built of stone, as there was no local timber, the sandstone shells and flapping rusty iron roofs mock the blistering sun and creak in the winter frost. The droughts of the 1860s put paid to the foolish dreams. 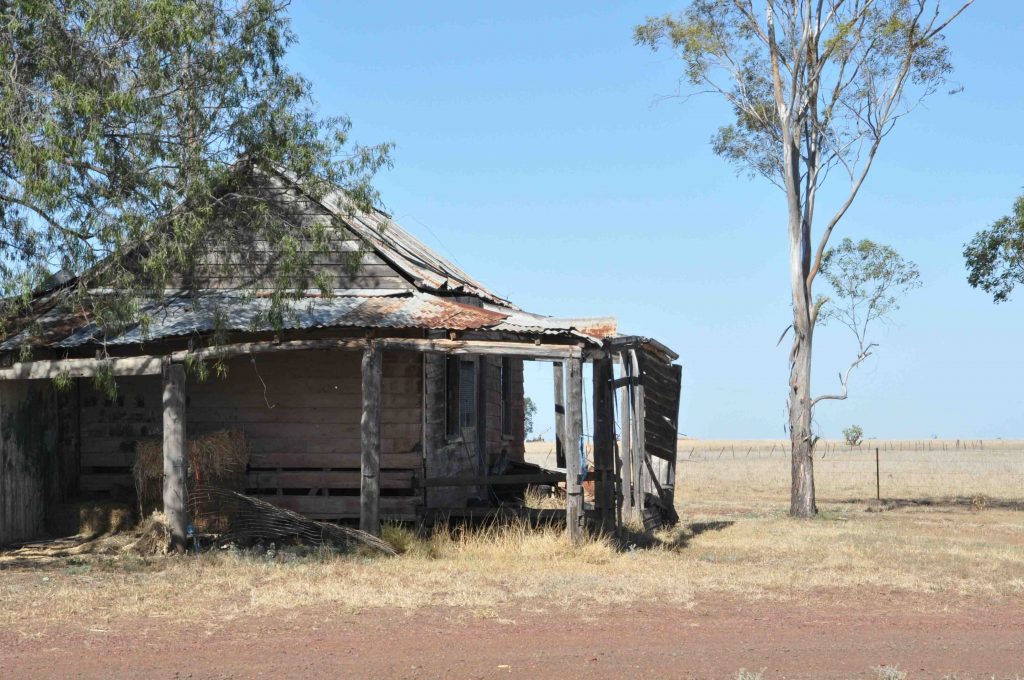 What can we learn from this? Yes, there are deep cycles of drought and flood in this land. What Goyder did not know was that these cycles would be exaggerated hugely by anthropogenic climate change that was yet to come. But it has arrived and now we see what he could not see then. When we walk on the land, we change it. We are only dimly aware of how we change it, but change it we do. Nature knows nothing of our ‘conventional wisdom’. No, the rains do not follow the plough. Governments have a responsibility to provide the sort of knowledge so conscientiously delivered by George Goyder. He was a faithful public servant, but his advice was ignored. Should we allow the common good to be overridden by public ‘conventional wisdom’ unsupported by peer reviewed science? Should the dominant political parties with their vested-interest financial supporters determine the political agenda for our nation? How do minority voices, that might contain the hidden wisdom, speak into the clamour of the political football match?

What of the common good? Is pursuit of the common good sufficient to be a political program? In our increasingly polarised, divided political landscape we Christians often appeal to the ‘common good’ as a way of appearing non-partisan, while retaining our core values. Are we too polite to engage in the rough and tumble of politics as it is now played? Is wanting too much to be seen as ‘respectable’ one of our sins?

Were we to summon the courage to enter the fray, what would we have to say?  Who would have ears to hear? Christians, together with many others as communities of faith, are easily dismissed as irrelevant in an increasingly secular world – or so we are told. The evidence is that as the post-modern, or late-modern, paradigm unravels there will be a return to the innate meaning seeking and making that are our natural heritage. Are we up to respond, or have we retreated into our faith silos nursing wounds of relevance deprivation?

Goyder is remembered for another reason. A small grass wren, A. goyderi, bears his name. This small bird is a rare example among birds of a species that evolved in a minor ecological refuge. These refuges, the inhospitable slopes of sand dunes in central Australia, themselves are in danger and the bird is facing extinction as grazing destroys their small, but unique habitat. The search for refuge will be on in earnest as the impact of climate change renders habitats unlivable. Our Pacific Island neighbours are losing foreshore and living space rapidly as the seas rise. They will be knocking on our doors seeking refuge. Will we welcome them?

These are the sorts of questions that will demand our attention. There are answers we as Christians can gift from our treasure trove of collective narratives to the world beyond.