In 2017 whilst as Dean of Bendigo my wife, Frances, was diagnosed with breast cancer. I will always remember how lovingly supported she was by Muslim members of the Bendigo community who attended medical appointments with her, cooked nourishing meals for her, and decorated her bald head with henna following chemo treatment.

During the early hours of Wednesday morning last week, the walls of Holland Park Mosque on Brisbane’s southside were vandalised with swastikas, ‘SS’, ‘remove kebab’ and ‘St Tarrant’ in reference to the Christchurch mosque shooter who killed 51 people in two terrorist attacks in March.

It is no coincidence that this cowardly and racist act of vandalism was carried out on the anniversary of September 11, with mosque leaders reporting that verbal abuse from passers-by and other incidents spiked on such significant days.

When a mosque is vandalised or Muslim worshippers verbally abused, I often wonder whether we, as Christians, take for granted our own right to worship in peace and safety. Muslims are often easily recognisable by their hijabs or other attire, leaving peacemaking women and men who practise Islam vulnerable to bullies motivated by irrational fear.

As people of faith we have a special and sacred responsibility to uphold the rights of others to practise their faith. So, when I found out about the vandalism of the Holland Park Mosque, I immediately reached out to Imam Uzair Akbar, who supported my Holy Week ‘walk and talk’ pilgrimage, with a message of solidarity and sorrow.

A group of Cathedral Precinct clergy and staff also visited the mosque on Friday with a collection of money to assist the mosque with the installation of security cameras. I was unable to go with the group, so with my blessing they went. Upon arrival, they were warmly greeted by mosque worshippers who had just finished their Jumu’ah prayers. They then met with senior mosque leaders and shared lunch and conversation.

Imam Uzair spoke about how the community had rallied around them, including two twenty-something women, who live close by and whom they had never met, who voluntarily scrubbed off the vile graffiti. Imam Uzair also shared that his congregation feels safest when people from the broader community visit the mosque and befriend their Muslim neighbours.

There are many ways that we can similarly safeguard the rights of our Muslim brothers and sisters to practise their faith. We can bring food and water to the mosque when they break their fast (Iftar) during Ramadan. We can learn about their faith by talking to a neighbour or worker who is a Muslim. And, we can reach out to them when they are in need, as we reached out to the Holland Park Mosque community last week.

Most significantly, we can politely and firmly stand up for our Muslim brothers and sisters in conversations when people express prejudice. Such prejudice can be subtle or it can be blatant. Either way, it is unacceptable for us as Christians to let it go.

Following the Sri Lanka Easter bombings in April, a group of Muslims from Brisbane’s southside phoned all the local churches, and then delivered flowers and a letter of condolence and support, signed by many mosque congregation members. Sunnybank Anglican Parish described the gesture as “an amazing gift”. 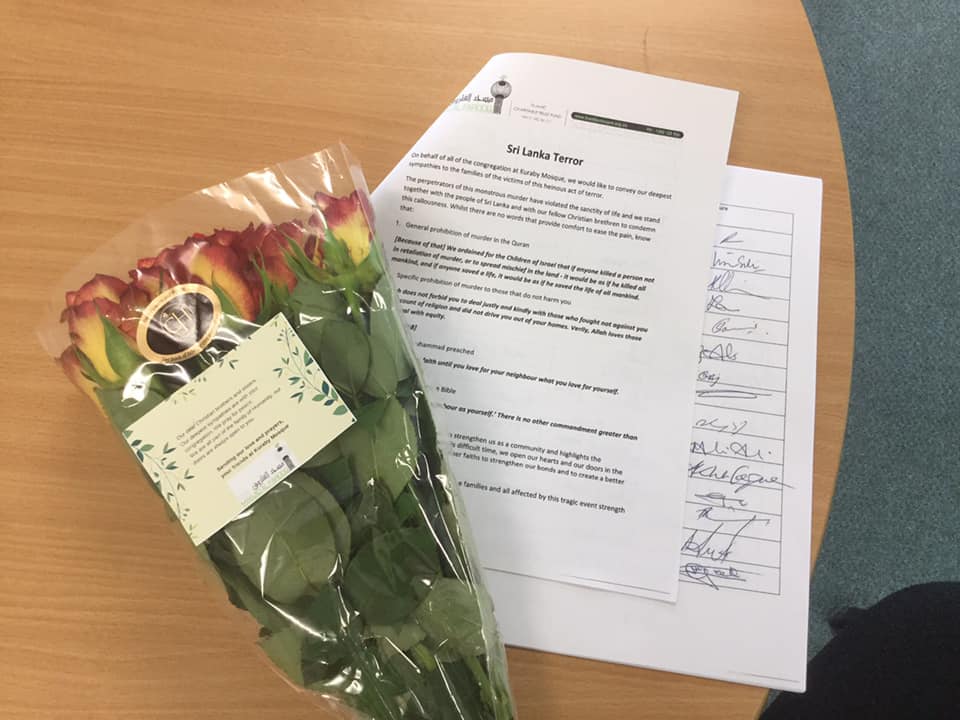 Flowers and a letter of sorrow were delivered to Brisbane churches on the southside, including to Anglican Churches, by Muslim community members following the Easter Sunday bombings in Sri Lanka