The greater burden comes in many forms – lost jobs, lost employment prospects, lost ways of life on the land or at sea, lost security without insurability, lost chance of home ownership. These are but the beginning of a long litany of implications.

When those who have contributed little to the problem of climate change are asked to participate in the austerity demanded to reverse the damage done, they rightfully ask, “Why us?”  Whether we like it or not, we are all caught up in a culture conflict, or more accurately a class conflict. Yes, even in the so-called Great South Land where egalitarianism is a by-word for Australianism, we have classes, and so also class conflict. Colonisation in this country brought with it boundaries, structuring our national life around class. Class is predicated on one’s access to the good things in life – education, health, freedom, opportunities, and living space with home ownership security.

Since the end of World War II, there has been an explosion of education, health resources, and social mobility. But the benefits have not been equally shared. For many reasons the gap between those the ‘haves’ and ‘the have-nots’ is widening. With this increasing gap becoming a gulf, our social cohesion is breaking down. Without social cohesion it is not possible to collectively and effectively address climate change, which is why we need to refocus on climate justice. Seeking climate justice will require far more from us than it would take to reverse climate change, enormous though that task will be.

The injustices of the widening gap between the classes in Australia will produce, and has produced, our own version of the ‘strong-man’ politician. There is a certain comfort to be had from leaders who say that they will ‘Make America Great Again’ – or our local version, ‘How Good is Australia!’ Around the world we see the same phenomenon, namely the rise of the strong-man leader whose message to the disenfranchised is, “we will stick it in the eye to the elites and we will return to you the lost respect and dignity that have been eroded with the changing face of work and life in our society.” The promises are hollow, but very seductive.  These politicians are very reluctant to address the urgent issues that will incite resistance from those who have put them in power. Who are they?  Well, there is an unholy alliance between the disaffected in society and the super-rich in society. Neither can see advantages in addressing climate change because they can only see losses for themselves. 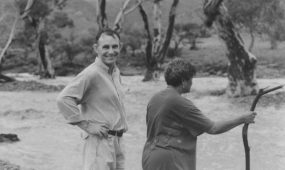 We have little chance as a church to influence the high and mighty. Corporations are without soul and so impregnable to any argument that may reduce or challenge the financial return to their shareholders. But we have a clear call as Christians to be compassionate to people whose rights are marginalised. They are calling out for their right to respect and dignity to be upheld. This is what has been lost in the late-modern post-industrial world. The new world based upon information and knowledge capital has left them high and dry on the shores of impoverishment. Their future, and that of their children, has been sabotaged and they are angry and despairing. It is to their calling that we must respond. How do we do that?