“I’ve grown up like this. I remember moving around a lot because we couldn’t afford to stay in the same place for long. I still remember when we actually settled down properly. I was in Year 5. Before that we moved every few months, wherever we could afford to go. Housing Commission helped us stay in the one place. It’s the longest place I’ve ever lived anywhere. I’m now shifting around a lot again, I hate it. I want to call somewhere home.” (Brooke*, Anglicare, Homelessness Services, Women and Families).

When we think about poverty, we often think of people not having enough money to cover essentials such as food and housing. We imagine people experiencing homelessness, of those going to bed hungry.

There’s no doubt that access to a living income is absolutely core to a dignified life.

This is why more than 70% of the community agrees that the rate of Newstart, unchanged for 25 years, should be increased to reflect the rising costs of essential goods and services, especially housing.

Australian Bureau of Statistics data shows that many of the biggest price increases over that time have been for things we need to buy or access regularly, rather than luxuries. Secondary school fees and health services, for example, have trebled in cost over the past two decades.

This means that lack of income has flow-on effects that are woven into lives in complex, multidimensional ways: physically, emotionally and socially.

For Brooke, currently living at Anglicare’s Homelessness Services (Women & Families) residence, the lack of a stable home as a child is still with her.

This is about more than a roof over Brooke’s head. It is, as poet and activist Maya Angelou writes, about “the space we can make our own, helping us find the peace and stability to take on all the other parts of our lives.”

Similarly, lack of food is about more than hunger. Anglicare Australia’s State of the Family Report, When There’s Not Enough to Eat, makes the point that:

The lack of access to healthy, safe food, experienced by up to a million Australians, grinds away at the fabric of their life. It affects adult and child health, parent relationships with children and, for children, not only their physical and cognitive development but also their capacity to do the simplest childhood activities: invite a friend over, go to a social event where it’s ‘bring a plate’, or celebrate a birthday.

The narrative of poverty becomes one of isolation, powerlessness and voicelessness.

Allowing poverty to continue becomes a denial of human rights that impacts one in eight adults and more than one in six Australian children.

Today is the United Nations International Day for the Eradication of Poverty. This year’s theme is ‘Acting together to empower children, their families and communities to end poverty’.

It marks the 30th anniversary of the adoption of the Convention on the Rights of the Child (UNCRC) on 20 November 1989, to which Australia is a signatory. This landmark human rights treaty sets out the civil, political, economic, social and cultural rights of every child, regardless of their race, religion or abilities. 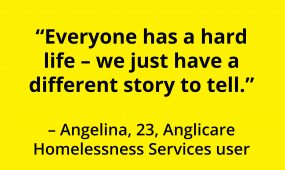 What is it like to experience homelessness while on Newstart?

It sets out our responsibility to promote, protect and fulfil the right of all children to a standard of living that supports their physical, mental, spiritual, moral and social development.

As such, the Convention involves all of us. Children and their families are not separate and discrete entities; families and communities are similarly interwoven — a community can’t flourish if its children and families are struggling.

On this International Day for the Eradication of Poverty, there are many actions we can take.

The national Home Stretch campaign is launching in Queensland on 28 November. Home Stretch advocates for state care to be extended to all young people in out-of-home care until at least the age of 21 years.

Many young people struggle with the current termination of care at 18 years. Half of these young people end up in poverty, homeless, in jail or a new parent within the first twelve months of leaving state care.

All young people deserve the stability and emotional support of a home — a right that we as a community afford most other young Australians in their transition to adulthood, as increasing numbers of young people stay at home into their mid-twenties.

What can you do to support Home Stretch?