When The Rev’d Canon Dr Marian Free became the parish priest of St Augustine’s Church, Hamilton in 2008 – which is celebrating its 100th anniversary this year – there was one particular story that some older parishioners felt was a stain on the church, involving a public furore, threats to use hand grenades and missing German-made windows.

The first church of St Augustine’s was a small timber structure dedicated in 1896. By the end of the Great War it was deemed to be inadequate for the growing congregation. The foundation stone for a new church was laid in December 1919, with the first service held less than a year later.

St Augustine’s, Hamilton circa 1920s, with the old church, dedicated in 1896, beside the new church, which held its first service in 1920

However, The Rev’d Canon Dr Marian Free said that the windows in question then became the centre of debate, controversy, protest and even death threats for one simple fact: they were made in Germany.

“At least one member of the RSL [Returned and Services League] threatened to throw a hand grenade through the windows of the church if they were put in at Hamilton.

“And so, for many years, the fate of the windows was a mystery and as far as we knew, the windows had disappeared.”

Canon Marian said that is unclear whether the priest at the time, The Rev’d John Brodie Armstrong, was aware the windows were German made, with the windows designed and displayed as a memorial to those who served and died in WWI.

“The architect’s idea was that the morning sun would stream through the windows and so five windows were ordered from a manufacturer in Germany,” she said.

“The RSL discovered they were made in Germany and they didn’t think that was appropriate for a war memorial, even though part of the idea was that it would be an act of reconciliation.”

Members of the RSL and the wider Brisbane community were so outraged by the proposition that The Rev’d Armstrong resigned; however, his resignation was rejected by the Parish Council.

Under great pressure from the wider community, it was decided that new windows would instead be ordered and made by a local manufacturer.

“But when the boat arrived, the wharfies wouldn’t even unload them – it was a big controversy in Brisbane and then the windows seemed to disappear from view,” Canon Marian said. 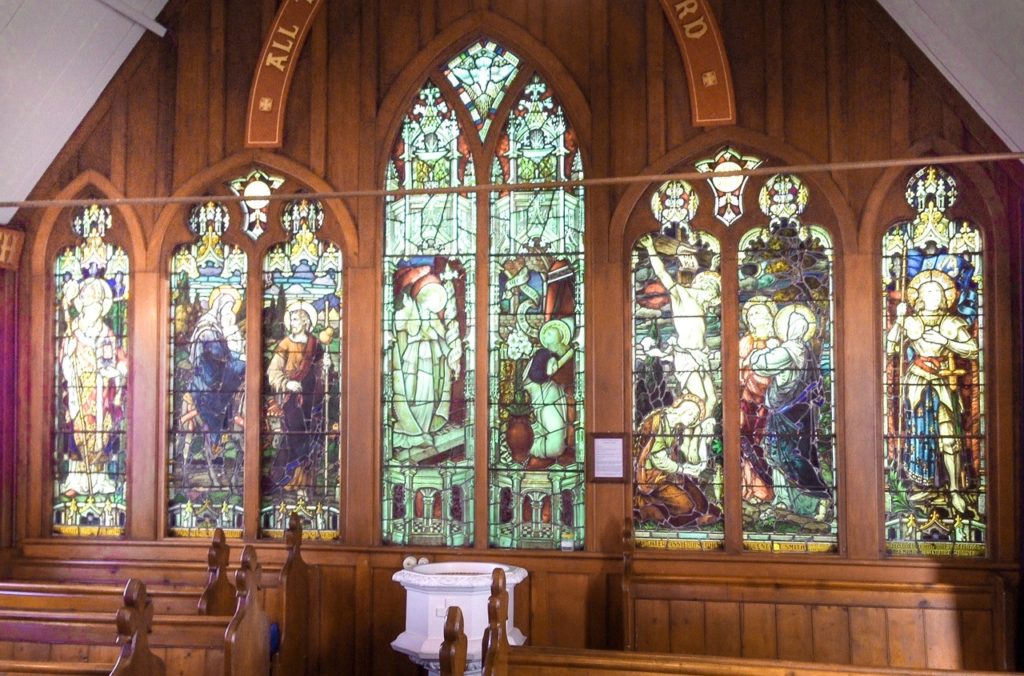 For more than 90 years, mystery surrounded the controversy – dating back to the 1920s – of five stained-glass windows ordered for St Augustine’s, which were manufactured in Germany

An unexpected invitation from an ally abroad

Almost 90 years had passed and across the Tasman Sea, the story of the German windows was all but forgotten, except by The Rev’d Roger Barker, who wondered how such large and intricate windows came to grace the walls of his quaint church, St Barnabas Church in New Zealand’s South Island.

“When you walk into the church, you think ‘why on earth would a little country church like this have such magnificent windows – why aren’t they in the cathedral?’ They do seem out of place given the size of the church,” the now retired priest said.

The small wooden church overlooks the ocean atop the picturesque coastal town of Warrington, home to around 450 people just north of Dunedin.

With questions and intrigue surrounding the local legend about the windows, The Rev’d Barker said that he embarked on a mission to find out more.

“I think the first big ‘ah-ha’ moment is when I heard of the rumour about St Augustine’s in Brisbane,” he said.

“I thought, ‘Okay St Augustine’s…that would explain why we have St Augustine of Canterbury depicted in one of our windows – we could be onto something.’

“I got the contact details for St Augustine’s and passed our story on to Marian who said she knew of stained-glass windows which went missing back in the 1920s.”

An article published in a local New Zealand newspaper in 1934 confirmed their suspicions describing, “five Bavarian stained-glass windows of exceptional workmanship and admirable design stored on behalf of a disappointed Australian importer in the dusty recesses of the Fraser Art Glass Works in Dunedin.”

Four of the five windows began being installed in St Barnabas Church in 1935 after being held in storage by a local arts dealer for over a decade.

With contact established between Warrington and Hamilton, and a common desire to ‘crack the mystery’, Marian decided the story required some first-hand investigation.

Fortunately, she was due to travel to New Zealand on other business and decided to make the long trek to see the church.

Once she saw the windows, she was almost certain that they were the missing windows.

The Rev’d Barker said that fifth window is still missing, and its location is the final piece of the puzzle, remaining unsolved today.

“I haven’t put a lot of energy into finding the fifth window; however, I contacted some of the local churches where I have seen similar windows, but none that I could be sure are the same,” he said.

“While we haven’t combed every inch of every church in New Zealand, we haven’t tracked it down and it could’ve gone anywhere really, even assuming that it’s survived all these years.” 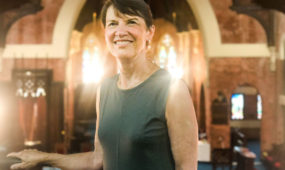 The Rev’d Barker and current priest, The Rev’d Dr Jeremy Nicoll, said that they value the connection the windows have given them with Canon Marian and St Augustine’s Church in Brisbane.

And although Canon Marian is more than happy with the current windows at St Augustine’s Church, the parish at St Barnabas is adamant that the controversial windows are there to stay.

“They’re our windows and we’re very proud of them – they’re part of the atmosphere and it really is a beautiful little church,” The Rev’d Barker said.

St Augustine’s bells also have their own intriguing history. The original bell also came from Europe – church historians believe it was originally installed in a Christian church in present-day Romania in AD. 320.

St Augustine’s Church celebrated its 100-year anniversary on the weekend, with a festive ‘Music on the Green’ event at Hamilton. 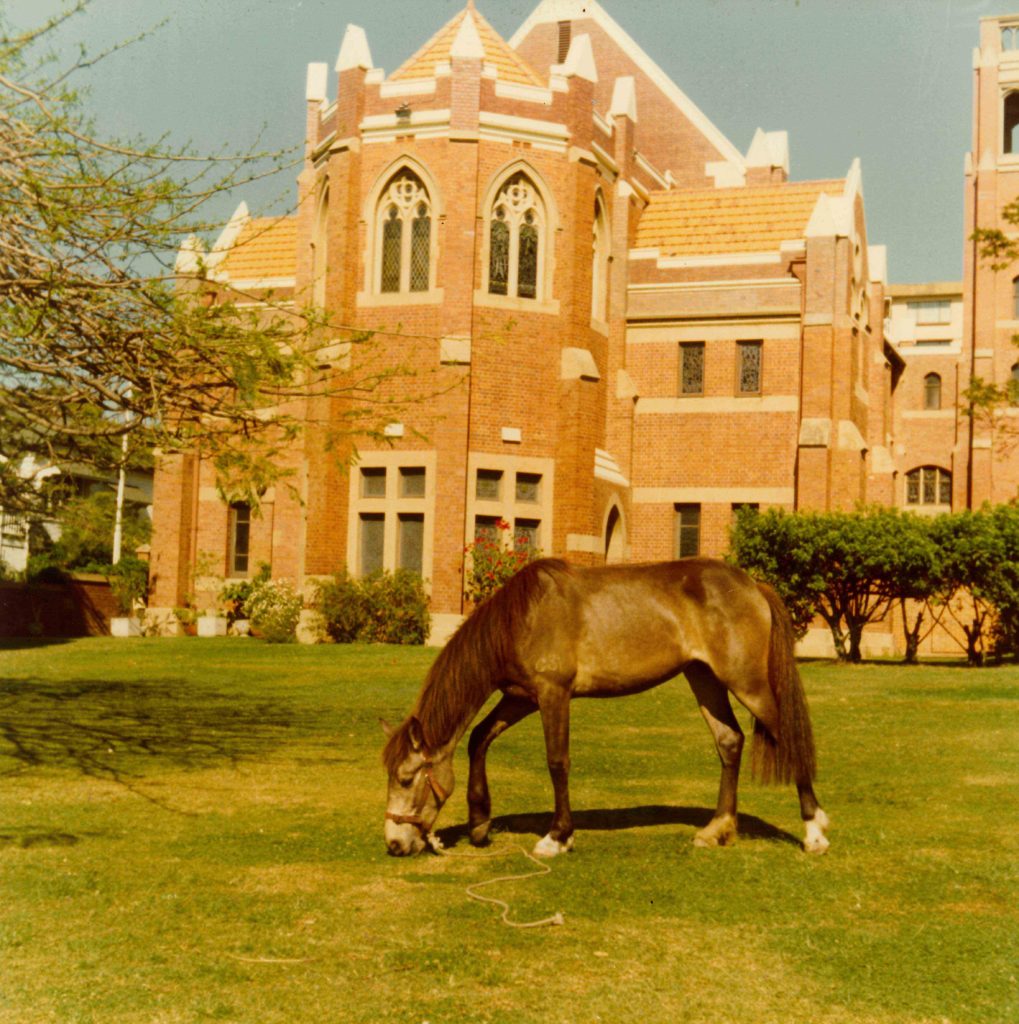 St Augustine’s has had an incredible and colourful history in its 100 years, which has included the occasional horse grazing on its lush green lawn

Canon Marian said that the event was attended by around 200 members of the parish, family members, friends and the local community.

“I think that it’s good to celebrate, especially when church attendance is declining. It’s easy to feel a bit overwhelmed rather than saying, ‘Well, it’s been 100 years and wasn’t it amazing that we built it in the first place,” she said.

“But I also think it’s an opportunity to reconnect with the community. While that may not get people to come to church, I really just think that a building like this belongs to the community.

“Church is a family, so let’s have a family reunion and if you decide to keep worshipping that would be great. But in any case, we’ll catch up, have a chat, get to know you and have those connections strengthened.” 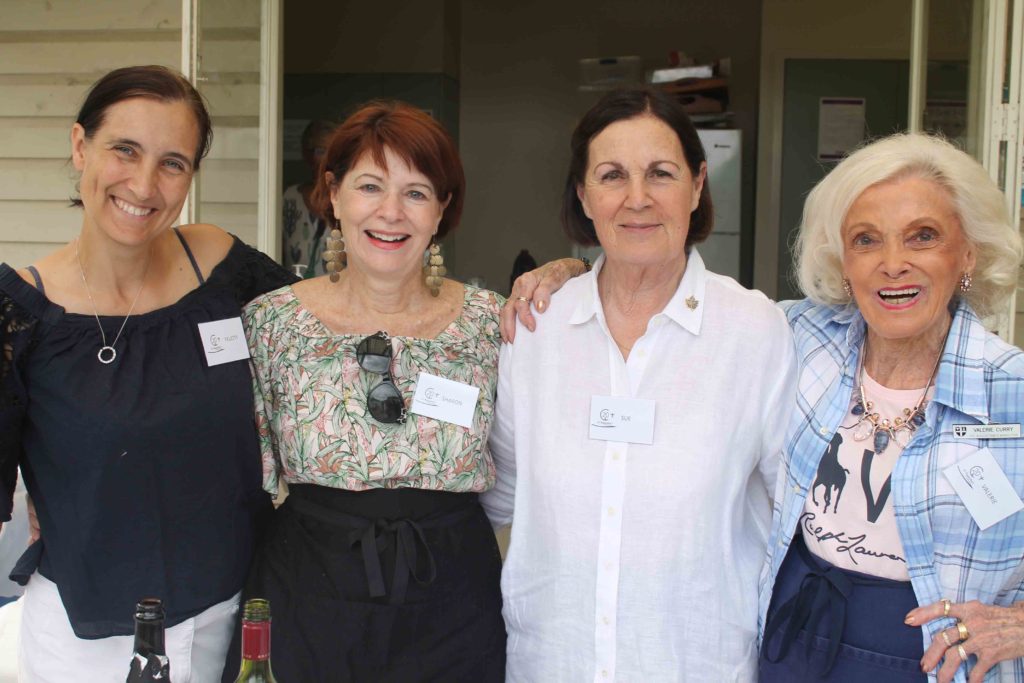 Around 200 parishioners, friends and supporters turned out on Saturday for a celebration which marked the 100th anniversary of St Augustine’s and the 25th year since the ordination The Rev’d Canon Dr Marian Free, including (L-R): Felicity Liang, Sharon Glasson, Sue Schellin and Valerie Curry