They are the stories and emotions of a destructive and traumatic bushfire season that will stay with Air Force reservist and chaplain Michelle Philp forever.

There was the farmer who lost everything in the South Australian summer bushfires just days after starting chemotherapy treatment. Another landowner suffered significant damage to his property. He was upset that the Australian flag at the front of his house was consumed by fire, but delighted to wake up one day to find a new flag erected by Australian Defence Force (ADF) reservists in time for Australia Day.

Other property owners, aged in their 70s and 80s, told stories of spending 30 years building up their farms as they stood amidst the wreckage of their properties bluntly saying, “I don’t have another 30 years.”

Like most Australians, Chaplain Philp spent the Christmas and New Year period praying as bushfires ravaged our country. She could see our nation hurting and wanted so badly to help.

So, when the call came through to the Air Force reservist and community chaplain on 10 January to ask if St John’s Anglican Church, Wishart would release her to assist with the bushfire recovery operation, she welcomed the chance to serve people in traumatised and shocked communities.

“The response of St John’s, Wishart to the request was amazing. They wanted to help and were glad their community chaplain could go on their behalf,” Chaplain Philp said.

“I was sent out with their prayers and blessing. Three days after receiving the call, I was on a plane to Adelaide and that night I was at my first community recovery meeting in the Adelaide Hills.

“For the next six weeks I worked alongside the local Army ‘padre’, caring for our hardworking Australian Defence Forces teams, helping them to deal with the grief and devastation they experienced every day with fire-affected locals, as well as dealing directly with property owners, their families and townspeople who were living through a national disaster.” 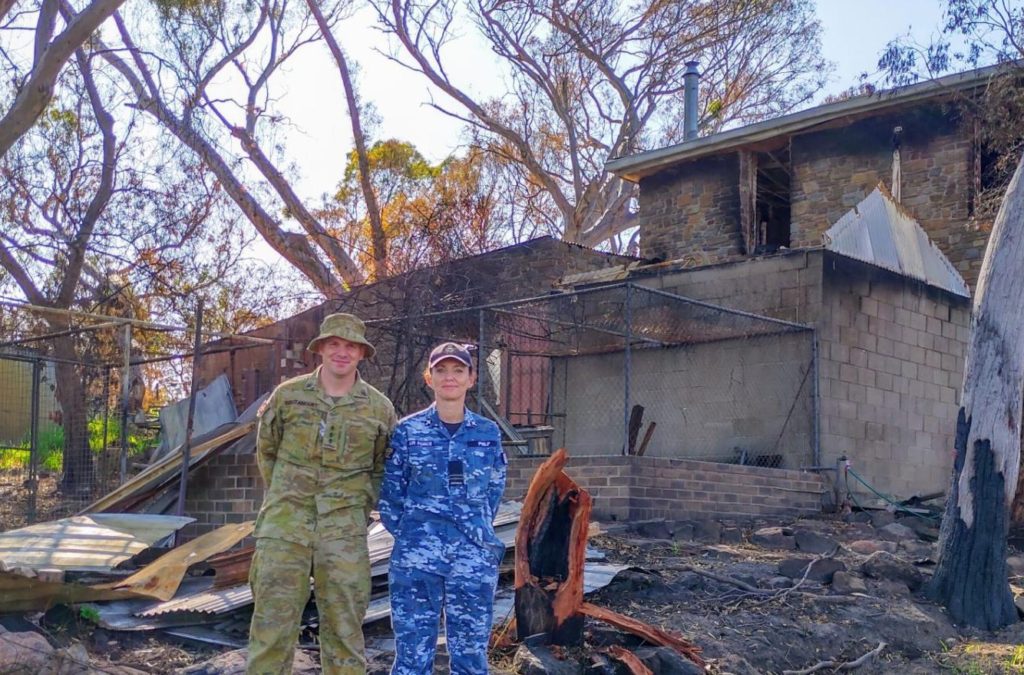 Chaplain Philp said that in the early weeks of her deployment, the land was black, eerie and silent immediately after the fires and that people were generally still numb from shock and wondering where to start.

The challenge was how to rebuild their lives and communities when fire had taken everything – not only their material possessions, but also the safe places where they came home from work and relaxed.

“Many people asked where God was in the midst of this devastation,” she said.

“When I attended community meetings, especially in the first week there was such a mix of emotions on display among locals – shock, trauma, anger and feelings of being overwhelmed, but the most important thing I could do was to be quiet and calm and to listen.

“Two scriptures stayed close to me over those weeks. The first was Psalm 46.1 with the reminder that “God is our refuge and strength; a very present help in trouble.” Despite the enormous trials around me, I could be assured that God was not only still in control, but that he was giving strength, refuge and help.

“I was to ‘be still and know that he is God’. In the midst of a crisis, that is one of the best things Christians have to offer: a calm certainty that God is at work and an ability to be the still, quiet and listening ear for the person who is in a time of trouble.

“The second scripture became my prayer for the fire-affected people of the Adelaide Hills: “Come to me all you who are weary and burdened and I will give you rest” (Matthew 11.28). The burdens of recovery are enormous. The to-do list of starting again seems never ending. It was my prayer that these weary and burdened people would come to Jesus and find their rest in him.” 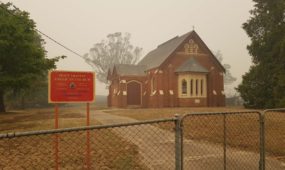 Serving on the Victorian bushfire frontlines

But she said the teamwork, camaraderie and generous spirit among the local community and the ADF recovery teams made it such a privilege to be part of the recovery effort.

By the end of her six-week deployment, hope had begun to return. Rain caused black fields to turn green. Burnt trees grew bright fuzzy shoots and birds began to sing on their branches again. Teams had cleared the rubble, built fences and removed tonnes of dead and fallen trees.

Just last month her work was recognised by the Department of Defence with a letter of appreciation to our Diocese for “your support of Operation Bushfire Assist 2019-2020” which was the “largest call out of the ADF Reserve since World War II.”

Chaplain Philp said she could not have served and met the challenges without the support of her local church.

“St John’s not only released me, they also sent me regular messages of prayer and encouragement as they partnered with me in what I was doing. I am so grateful to be part of such a caring community,” she said.

Editor’s note 18 September 2020: Congratulations to Chaplain Michelle Philp who was awarded a Silver Commendation for her efforts in Operation Bushfire Assist from the Task Force Commander. Silver Level Commendations are awarded for excellent achievement in the application of skills, judgement or devotion to duty.