Four weeks have passed since my wife, Robyne, and I travelled down to the Victorian Alps region to assist with the aftermath and recovery from the devastating bush fires.

Only a few years back, I had been the Rector of both the Anglican Parish of Moama and the Uniting Church Parish of Mathoura in The Riverina region of NSW. We had both spent a lot of time in the Alps during that period, so we know the area well.

When I heard about the fires, I contacted the Bishop Elect for Wangaratta, Clarence Bester to find out what help was needed and to identify if we had the skills to assist. Robyne is a teacher and trained counsellor. I spoke of the need to our Parish Council and they were very keen to assist us to make the journey and spend time as needed visiting parishioners and victims of the fires.

During our three weeks away in the Victorian Alps, Robyne did great work with Lee Kelb (wife of the rural Dean) visiting very frightened residents, and I conducted many services – freeing up the local clergy to work in some of the evacuation centres – including a funeral at Mount Beauty, which we had to do in the pub.

From my past experience and training assisting with emergency and disaster relief efforts, I had expected to spend time solely assisting other emergency workers on the frontlines. Things worked out quite differently, instead  experiencing the adage, “there is always something new to learn!”

We left Queensland’s Esk at 4 o’clock on a Friday morning, driving for 19 hours to make it to Yackandandah, a small tourist town in north east Victoria, that night as the next day was expected to be catastrophic. We had both been in the Alps on ‘Black Saturday’ 10 years ago assisting with pastoral care needs and we held grave fears for people in the Alps and for their homes and livelihoods. 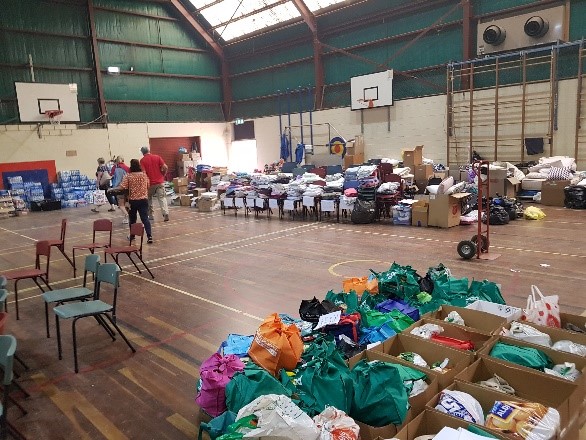 “The Corryong evacuation Centre where we unloaded truck loads of supplies.”

Early the next morning, we headed for Tallangatta, the main centre for evacuation and the work base for emergency services battling the fires in Corryong, 120 kilometres east of Albury-Wodonga. It was a hive of activity, with so many people doing generous and brave things and encouraging each other while doing so. It was a privilege to be able to assist there.

We learnt a valuable lesson there. While the evacuation centre was overflowing with everything, including food, clothes and beds, and while across the road there was a large park where numerous community and church groups were cooking up a storm, on the other side of the park was the largely unoccupied business area. Very few people in the shops were buying anything because the evacuation centre and community and church groups were providing all that was needed. This was one of many situations we witnessed where good intentions undermined other desired results.

The recovery centre in Corryong was being managed by Red Cross volunteers from Tasmania, with Centrelink staff from Wagga Wagga, Bendigo State Emergency Service personnel and paramedics from Warrnambool also assisting. There has been much written in the media about charities’ use of donated money. In Corryong, the Red Cross staff were volunteers and the necessary accommodation, food and transportation were all appropriately sourced locally injecting much needed revenue into the local economy.

Later in the week I was up at Corryong and Cudgewa, 430 kilometres north east of Melbourne. Most of Corryong town was spared, but Cudgewa lost most of its buildings. 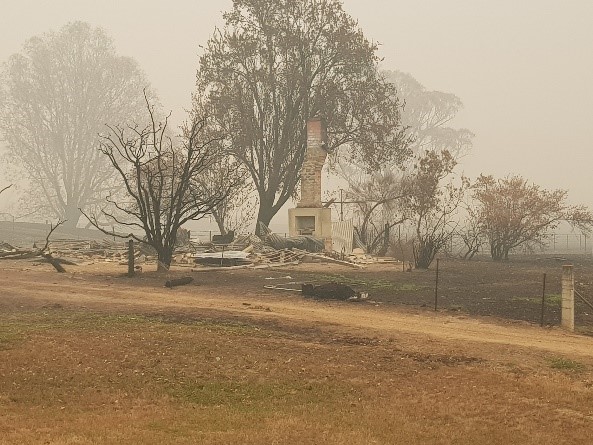 “The burnt-down home in Cudgewa is opposite the Anglican Church. The fire surrounded the Church, melted the down pipes and burnt down the tank stand – but did not detonate two large gas cylinders that were near the tank stand.”

Around Cudgewa the devastation to rural properties was beyond description. I spent a long time with two single older brothers who shared the one property, two houses, sheds and yards. All they had left after the fires was the steel cattle yards and stock. Everything else, including 1000 bales of hay, was gone. They were bunking in Corryong and coming out every day to hand feed their cattle. In the typical country folk way, as we sat in the heat, dust and ash, their main concern was for those who they considered were doing it tough. 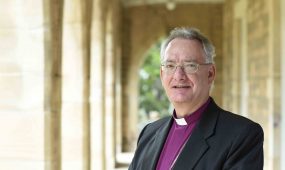 Bushfires in Queensland and in other parts of Australia

Sadly, there were so many others in the same position, having lost everything.

We spent a great deal of time over towards Myrtleford and Bright 280 kilometres north east of Melbourne, and found all through the area, particularly with older residents, that the level of fear was so very high. For those whose main information source was the media, it was not helpful to constantly hear and see so many reporters trying to make their area the latest and biggest centre of catastrophe, especially when the memories of Black Saturday were so fresh.

Another lesson. It is great when people come from outside an area to assist – special bonds grow as people work alongside each other in the face of adversity – but outsiders eventually leave. We found it much more prudent and constructive to directly assist the local clergy, parish workers and business people who were really struggling so that they can strengthen the bonds in their community long after we have gone.

I could fill pages with the stories of people’s experiences, as they persevered through the terrible air quality, heat, worry and stress to help each other. 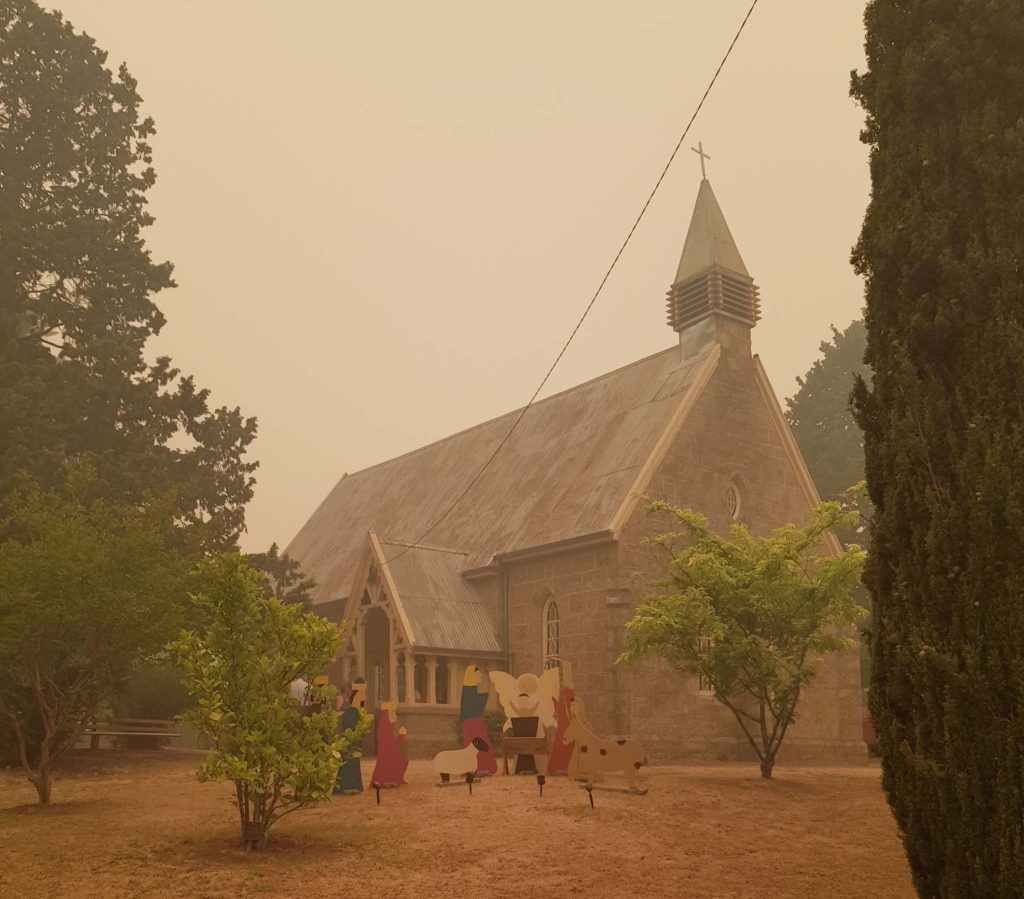 “We stayed in the old Yackandandah Rectory for the most part. This photo gives some idea of the air quality. We only had three relatively clear days.”

I sincerely thank my Parish of Brisbane Valley for sending us down to rural Victoria to help others even though we have enough of our own challenges here, especially with the drought.

I also thank Bishop Cam Venables for his support and for suggesting that I write this reflection upon my return.