In 1942 the dark clouds of war came to the peaceful island of New Guinea. As the Japanese army advanced through the mangroves and tropical rainforests, decisions needed to be made about evacuating Australian missionary and Diocesan clergy and lay people, presided over by the then Bishop of New Guinea, Philip Strong. His famous memo, sent to all clergy and staff in January of 1942, eerily foreshadows what would occur in the following months. It can be found in the book The New Guinea Diaries of Philip Strong, 1936-1945, edited by David Wetherell, a copy of which is held in the Records and Archives Centre:

“One thing only I can guarantee is that if we do not forsake Christ here in Papua in His Body, the Church, He will not forsake us. He will uphold us; He will strengthen us and He will guide us and keep us though the days that lie ahead. If we all left, it would take years for the Church to recover from our betrayal of our trust. If we remain—and even if the worst came to the worst and we were all to perish in remaining—the Church would not perish, for there would have been no breach of trust in its walls, but its foundations and structure would have received added strength for the future building by our faithfulness unto death.” (Published 1981, p.223)

Later in this same memo Bishop Strong said that some may need to leave if arrangements could be made. The parents of one missionary pressed desperately for their daughter, Mavis Parkinson, to be allowed to leave. However, given the choice to do so, this missionary teacher from Ipswich refused to leave, choosing to stay at the Gona-based mission instead. Miss Parkinson, along with May Hayman and 10 others, were killed by the invading forces, and the 12 are commemorated every year on 2 September, and are known as the Martyrs of New Guinea. 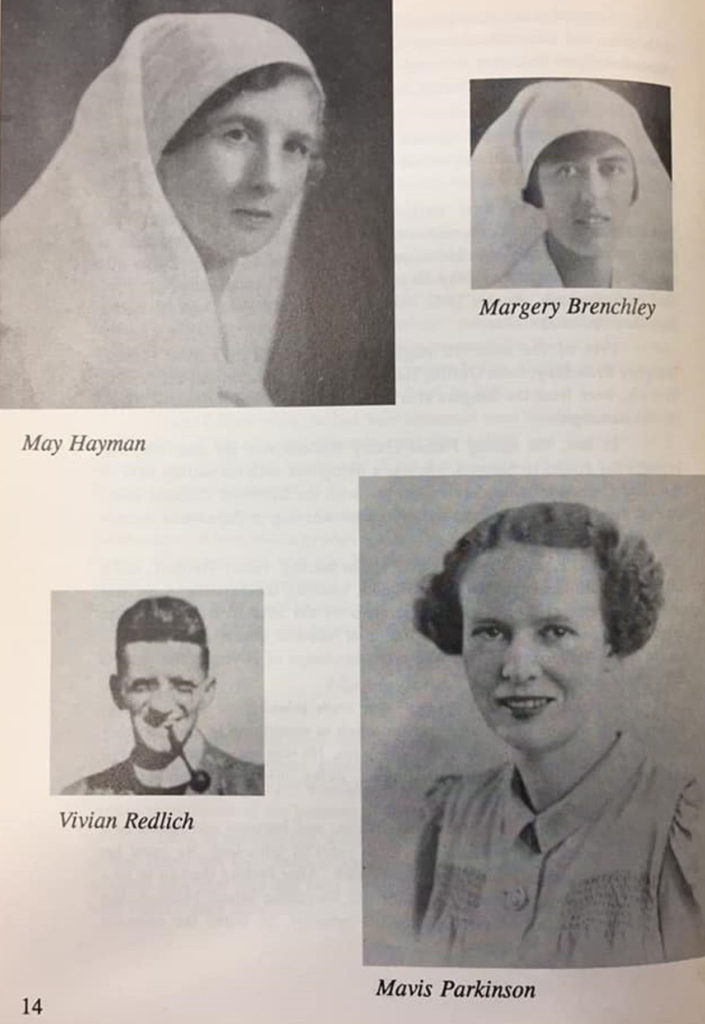 One of the martyrs, The Rev’d Vivian Redlich, was engaged to another, Mavis Parkinson’s friend and missionary nurse Sister May Hayman. Redlich and Hayman were separated at the time of the invasion. Both Parkinson and Hayman were killed at Popondetta after being imprisoned in a small coffee hut for days. A New Guinea local had tried to help them escape, but they had waived him away fearing he would get into trouble.

It was believed that May Hayman’s fiancé, The Rev’d Redlich, was among the martyrs beheaded on Buna Beach. But following 70 years of secrecy and shame among the local villagers, it was officially revealed in 2009 that he was speared to death by an Orokaivan tribesman while on his way to reunite with nurse Hayman weeks after the Japanese invasion. 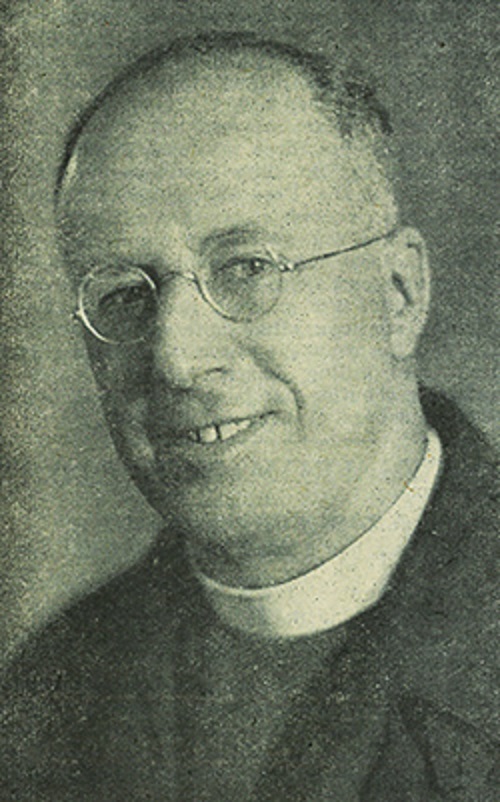 The Rev’d James Benson, circa 1940 (Image courtesy of the Anglican Board of Mission)

It was the writings of The Rev’d James Benson that led to the first discovery of new items relevant to the martyrs. From the outset of their flight into the jungle, where they later hid for months, Parkinson and Hayman had The Rev’d James Benson as their companion. He was presumed dead; however, word came through that he had escaped the soldiers that had captured Parkinson and Hayman. He was eventually captured and taken to a prisoner of war camp at Rabaul. 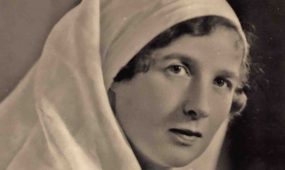 We found two poems written by The Rev’d Benson. These were copies, sadly, rather than the originals, but as they were written by the only member of the group who had fled into the jungle and survived, it was wonderful to find them. It is not known if these have been published elsewhere, but they are not contained in The Rev’d Benson’s memoir, titled Prisoner’s Base and Home Again, a copy of which is also held at the Records and Archives Centre. In September 1975, the poems were sent to Archbishop Strong by a Nancy H. White, who had copied them from Benson’s original poems back in New Guinea. The one poem, titled ‘Gona’, speaks of his belief that the mission stations would rise again. The second, far more poignant poem, is titled ‘To May and Mavis’, the two martyrs who walked for so long with James in the days and weeks leading up to their capture and execution. 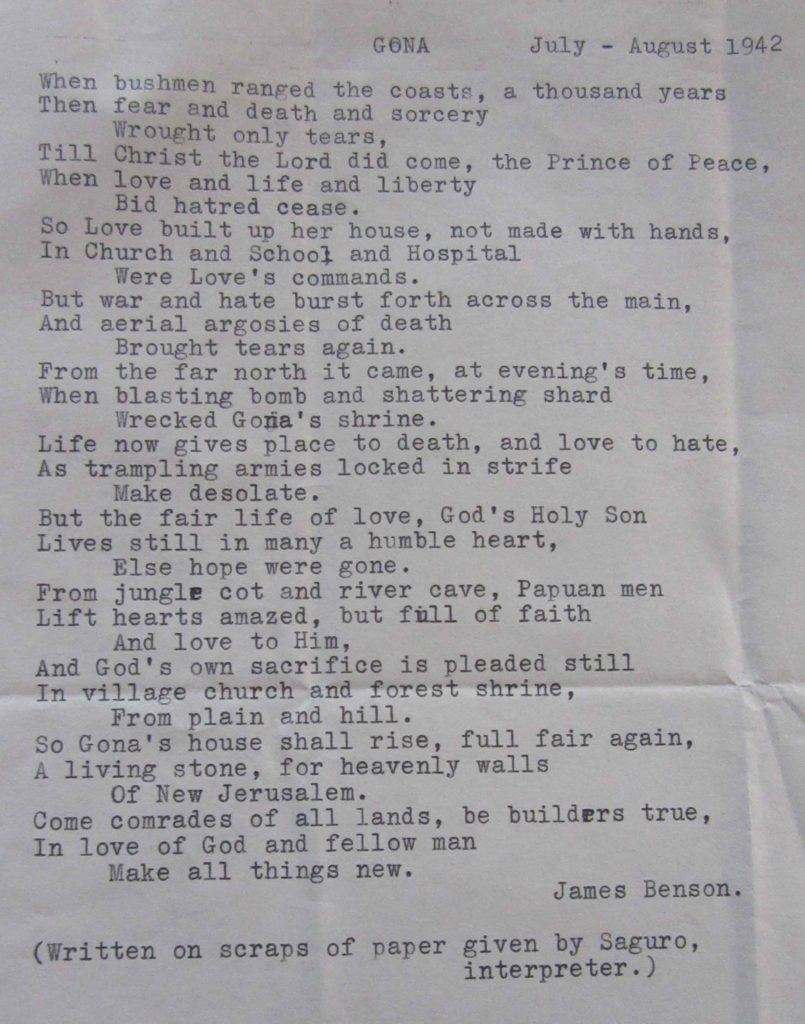 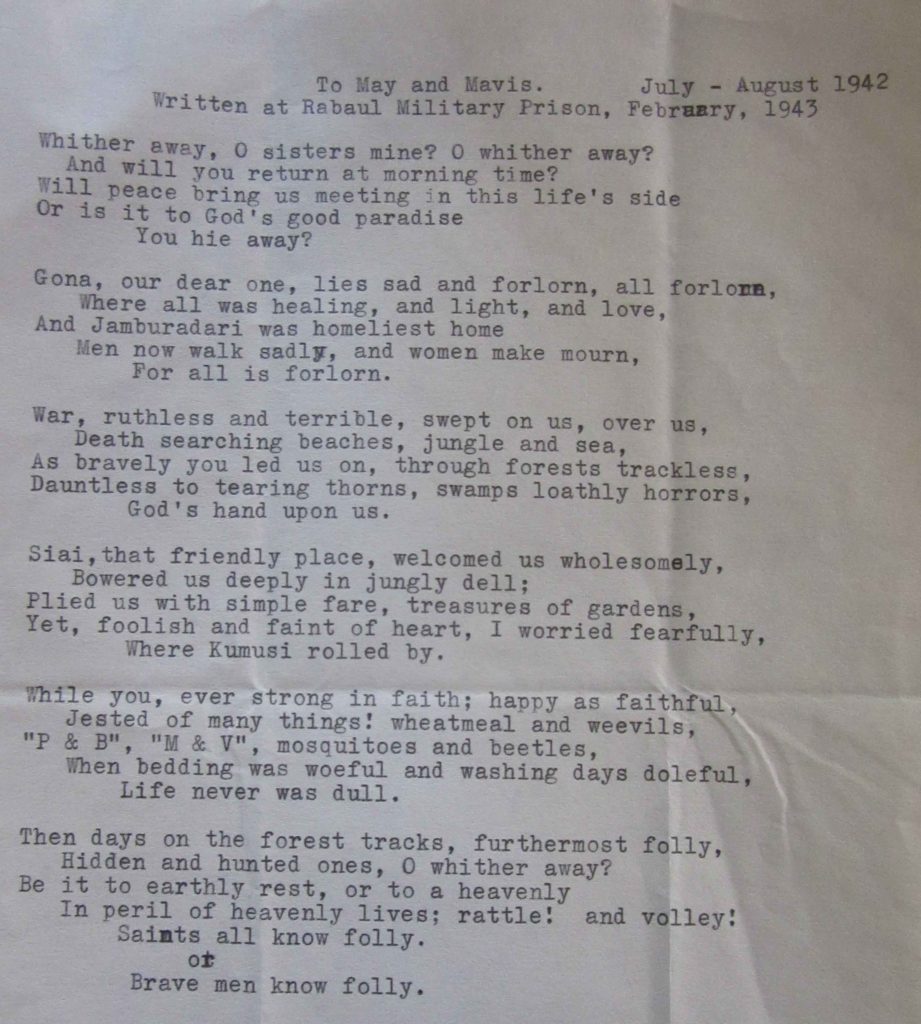 Our next discovery relates to Sister May Hayman herself. Sadly not many images of this young missionary martyr and her time in New Guinea exist. However, we were astounded to find one. It is a blurred and overexposed picture; however, on the back is inscribed the words, ‘Nurse Hayman giving out cod-liver oil 1937 – Dogura’, in Archbishop Strong’s hand. Then, in brackets, it is noted, ‘Nurse Hayman martyred 1942’. This image, although the quality low and the face of Sister Hayman difficult to make out, is a special discovery – taken in New Guinea five years before her death. 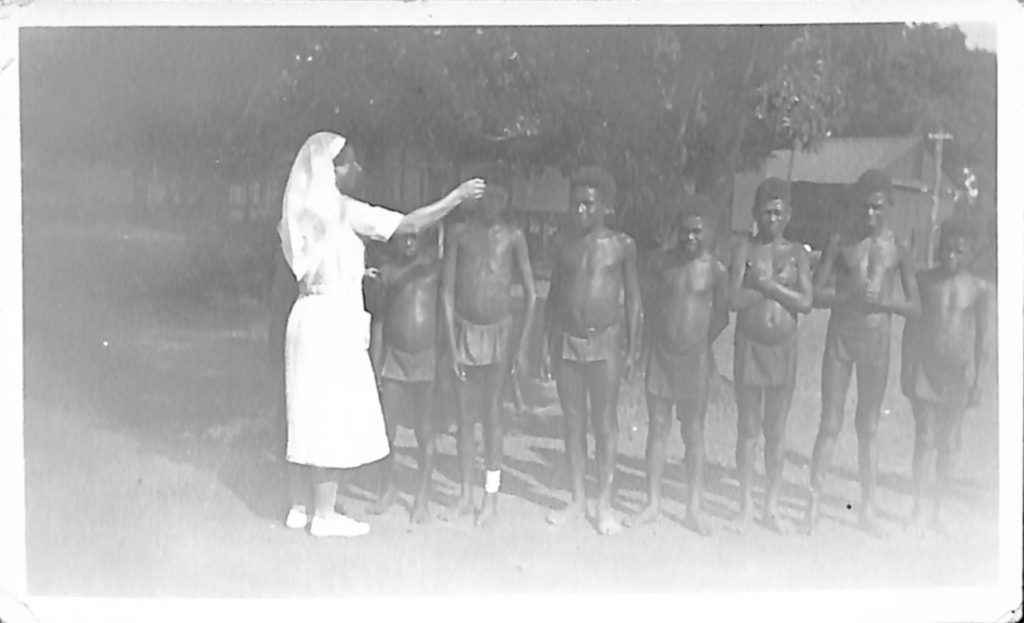 The image of Sister May Hayman discovered by the Archives staff, labelled ‘Nurse Hayman giving out cod-liver oil 1937 – Dogura’ (Image courtesy of the Records and Archives Centre)

The third, and perhaps most exciting, discovery was a group photograph of the staff at Dogura taken around 30 October 1939. As we scanned through the list of names on the back of the photograph, we noticed that five of the New Guinea Martyrs were featured in the image, as well as The Rev’d James Benson. These include priests The Rev’d Henry Holland and The Rev’d Henry Matthews; builder John Duffill (he appears to have been called by his middle name ‘Stanley’ in the description); and, teacher Miss Lilla Lashmar, smiling as a sunbeam floats over her face.

A group photograph of the staff at Dogura in October 1939. The image shows five of the New Guinea Martyrs just three years before their deaths (Image courtesy of the Records and Archives Centre) 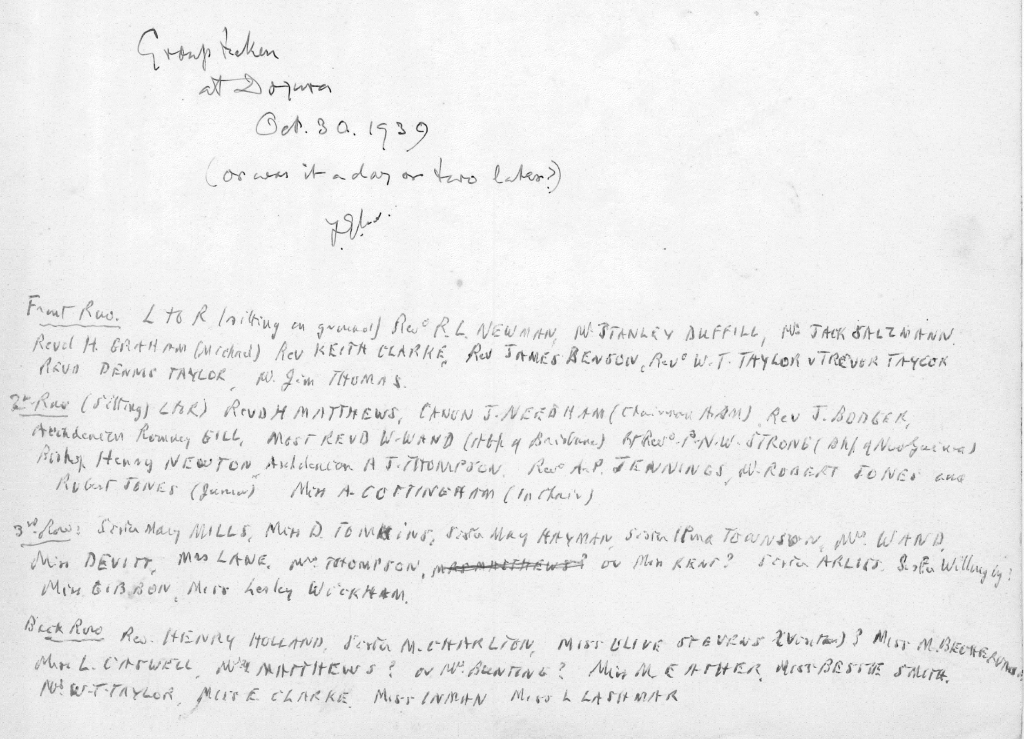 The most intriguing aspect of the photograph is the person who has been attributed as ‘Sister May Hayman’. This, of course, could easily be the young betrothed of The Rev’d Redlich; however, when we compared the image to a known picture of Mavis Parkinson, the resemblance to Mavis was obvious. Could this have been a mis-remembered name by Archbishop Strong and are we looking at an extremely rare image of Mavis Parkinson in New Guinea? It is certainly possible.* 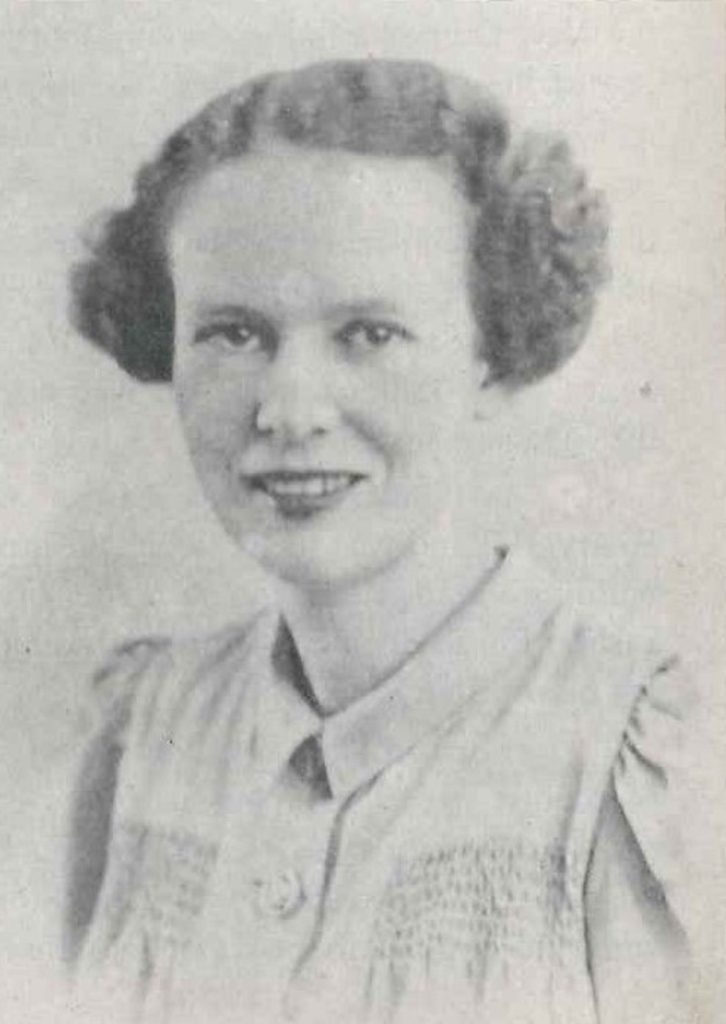 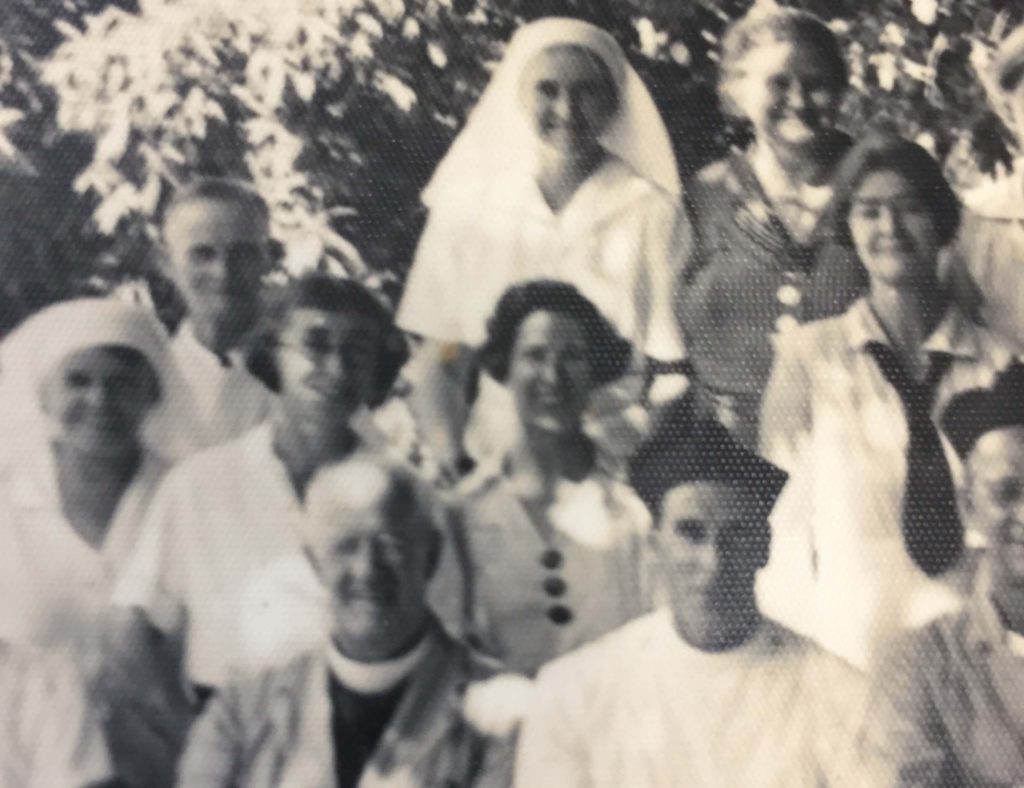 The person attributed as ‘May Hayman’ in the group photograph, centre of picture – October 1939 (Image courtesy of the Records and Archives Centre)

In 1946, after being asked by the Synod of the Diocese of New Guinea (then a Diocese of the ecclesiastical Province of Queensland), Archbishop Strong chose the 2 September to be the day the Church commemorates the Martyrs of New Guinea annually. It is exciting to know that we can still find unique and new traces to that extraordinary dozen who, as the title of the well-known 1964 book by The Rev’d E. C. Rowland states, and echoing that memo by Bishop Strong, were Faithful unto Death. If you are able to travel to New Guinea, the Martyrs have been commemorated in various statues, stained-glass windows and shrines, including an altar dedicated specifically to Mavis Parkinson and May Hayman outside of Popondetta. Closer to home there are memorials throughout Australia and within our Diocese, perhaps the most poignant being the memorial cross erected at St Paul’s Anglican Church, Ipswich, the parish of Mavis Parkinson.

So, this year on 2 September, perhaps hold in your thoughts and include in your prayers these remarkable Anglicans, ordinary souls, who were gifted with an extraordinary faith. 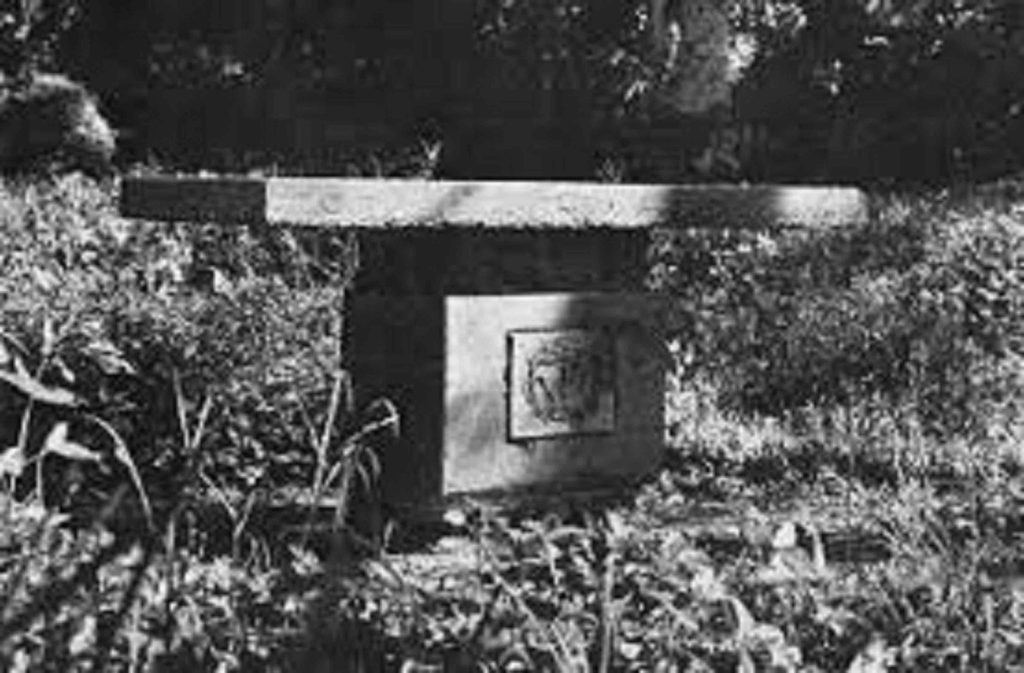 An altar erected in 1968 and dedicated to May Hayman and Mavis Parkinson, not far from Popondetta, New Guinea (Image courtesy of the Anglican Board of Mission)

* Editor’s note 28 August 2020: Mavis Mathieson-Frame, one of our parishioners and the niece of Mavis Parkinson (proudly bearing her name), has written to anglican focus and informed us that Mavis could not have been part of the 1939 group shot pictured above as she did not arrive in New Guinea until 1941. Thanks to Mavis Mathieson-Frame for this valuable information.