‘16 Days of Activism Against Gender-Based Violence’ is an international campaign, launched by UN Women, which takes place each year from 25 November until 10 December. For the second time, Anglican Mothers Union Bundaberg held three events to support the ‘16 Days of Activism Against Gender-Based Violence’ campaign. This year, we partnered with Bundaberg Regional Council, who show their commitment to raising awareness of domestic and family violence through the Red Bench Project.

The Red Rose Foundation launched the Red Bench Project to build a permanent reminder that domestic violence occurs within all our communities. The presence of a Red Bench in a public location aims to raise public awareness and ensure this important issue remains visible. To date, Bundaberg has four Red Benches, one being in the grounds of Christ Church, Bundaberg with a plaque that reads, ‘Change the ending – let’s stop – domestic violence’.

Anglican Mothers Union Australia (AMUA) joined other local organisations at the large community gathering at the Red Bench in Bundaberg’s Alexandra Park. At 9 o’clock in the morning, the day was launched by the Mayor, Cr Jack Dempsey, who spoke passionately about domestic violence and his previous experience as a police officer. A visiting member of the Red Rose Foundation spoke on the Red Bench Project before the Walk Against Violence commenced. Event participants carried a large banner on which the logos of AMUA and all other supporting organisations were displayed.

At 10.30 am, the bells of Christ Church rang 54 times to acknowledge the women and children who were murdered in Australia due to domestic violence this year to mid-November. The AMUA prayer service followed with the lighting of candles and a speaker from the EDON Place Domestic and Family Violence Centre. Some community members who had participated in the Walk Against Violence also joined the prayer service. 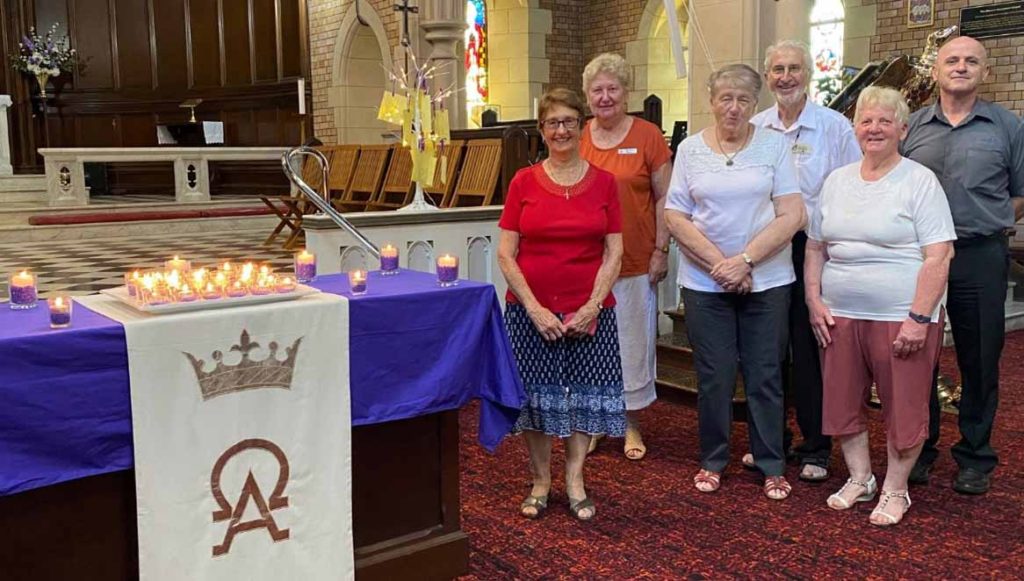 At the end of the day, the ZONTA Club of Bundaberg launched a ‘NO to Violence Against Women’ event at the Bundaberg Multiplex Sport and Convention Centre.  It was well-attended, with speakers and The Rev’d Danni Clark closing the proceedings with appropriate prayers. The historic fig trees located in the grounds were floodlit with orange, the colour designated by the UN Secretary-General’s UNiTE to End Violence Against Women campaign, in remembrance.

AMUA’s next event was on the evening of Friday 4 December at the Good Shepherd Anglican Church Hall where The Rev’d Andrew Schmidt and his helpers provided a meal, COVID-19 style, and we heard from a local solicitor who discussed her work with domestic and family violence and the work of EDON Place.

On the UN Human Rights Day on Thursday 10 December, AMUA held a closing prayer service to mark the conclusion of the 16 days of prayer campaign, again incorporating the ringing of the bells. Sadly, the bells rang 61 times this time, marking an additional seven deaths in the 16 days prior. The service included prayers with lighting of candles and a speaker from EDON Place, the Coordinator of the men’s intervention program, Responsible and Respectful Choices.

During the 16 days, a prayer tree was placed in the church to provide the opportunity to write a prayer and hang it on the tree. These prayers were offered to God at the final prayer service. A pamphlet of 16 days of bible verses and prayers was also made available.