In the weeks leading up to Christmas Day, Bethlehem was no doubt spoken of from every church pulpit the world over as people commemorated its significance in our salvation story. However, was Bethlehem only talked about in historical terms as it relates to the Biblical narrative or was there consideration given to the life infants are born into in current day Bethlehem? 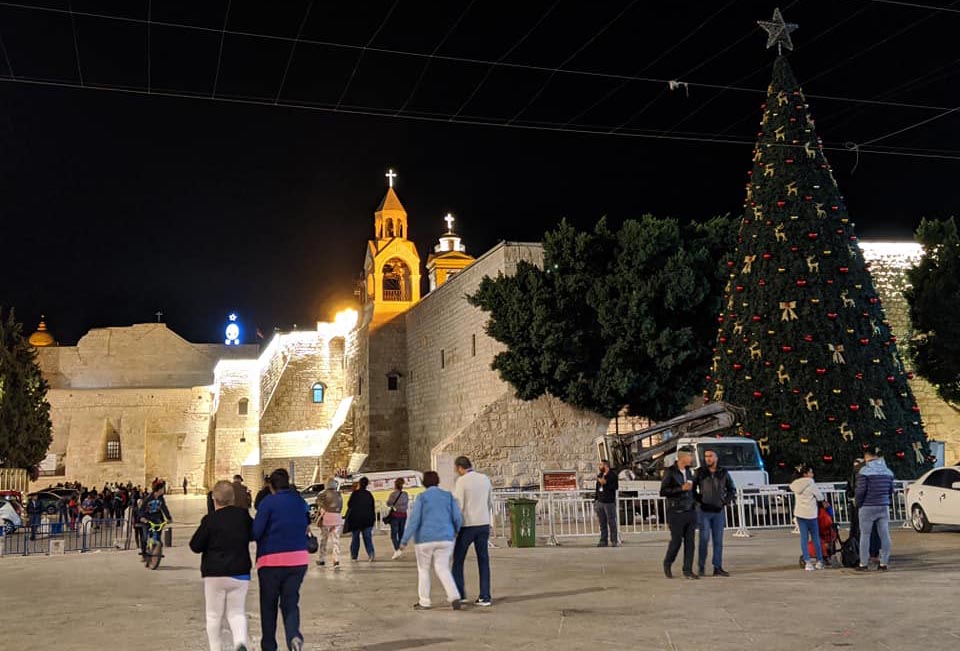 If you have ever walked down the steep cobble-paved Star Street at Christmas time with the beautiful festive lights hanging overhead; meandered through the narrow, twisting streets lined with ancient buildings in the old part of town; stepped through the hobbit-sized door that leads into the Church of the Nativity or visited the Cremisan Valley and Shepherds’ Field, you know how special and spiritually significant a place Bethlehem is. 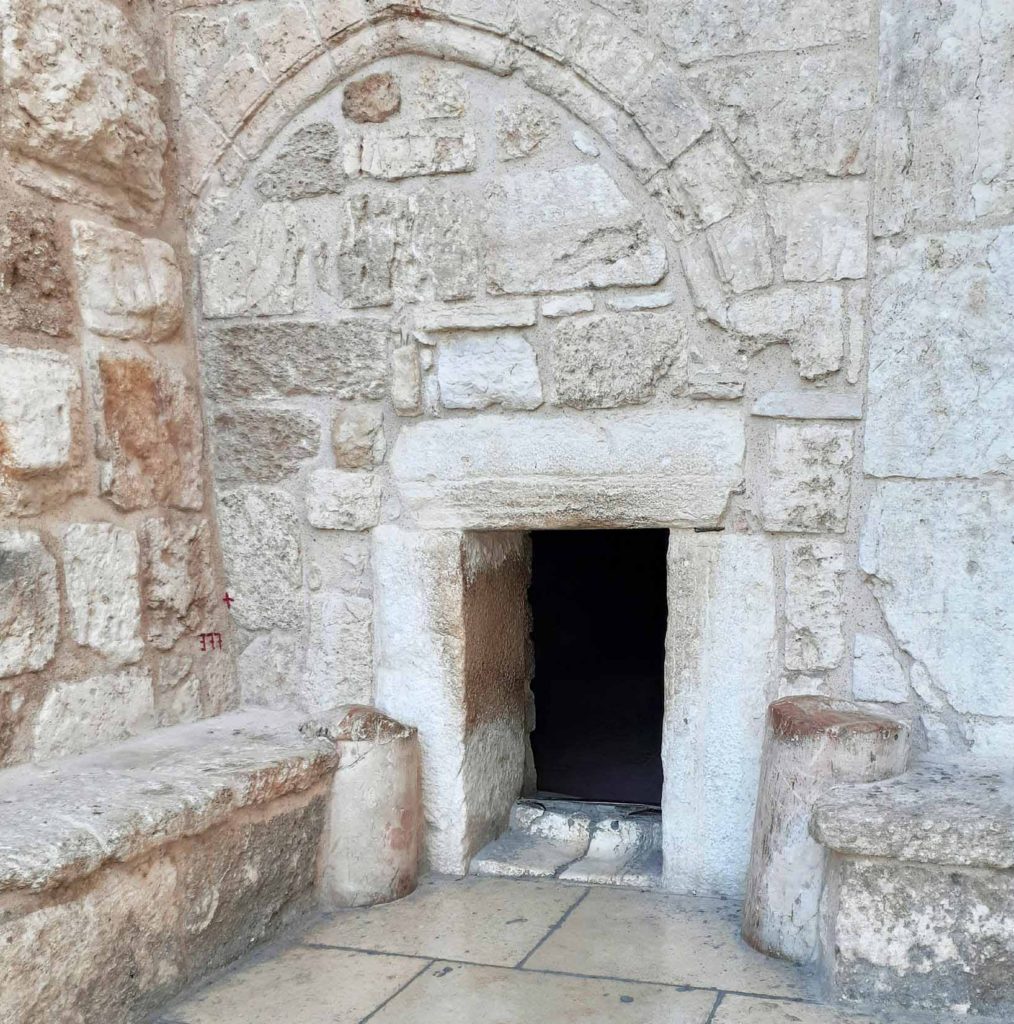 Church of the Nativity entrance 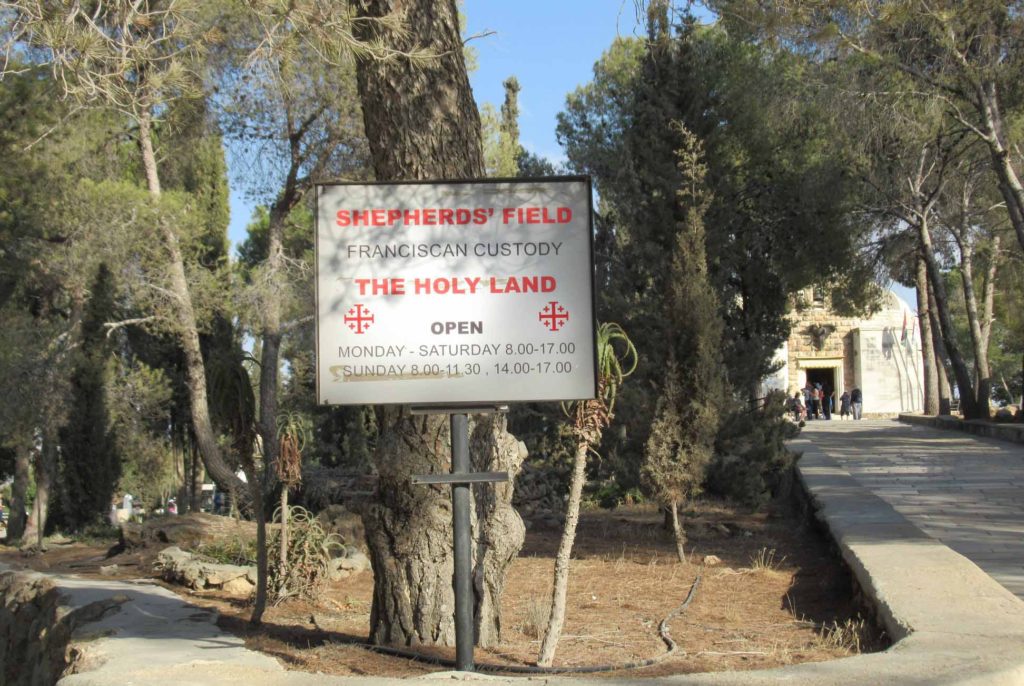 Late last year I had the privilege of doing just that, but for me, what held more significance, was meeting the local Palestinian inhabitants of this ancient city.

Despite the crippling Israeli military occupation Palestinians live under, they exude such life and hospitality. Despite the threat of their homes being demolished without warning; their land being confiscated for Israeli Settlements to be built; being placed on water rations whilst those same Settlers have unlimited water supply and usage; their freedom of movement and access to education, employment and healthcare being restricted by checkpoints and barriers – despite all this, they still have hope. 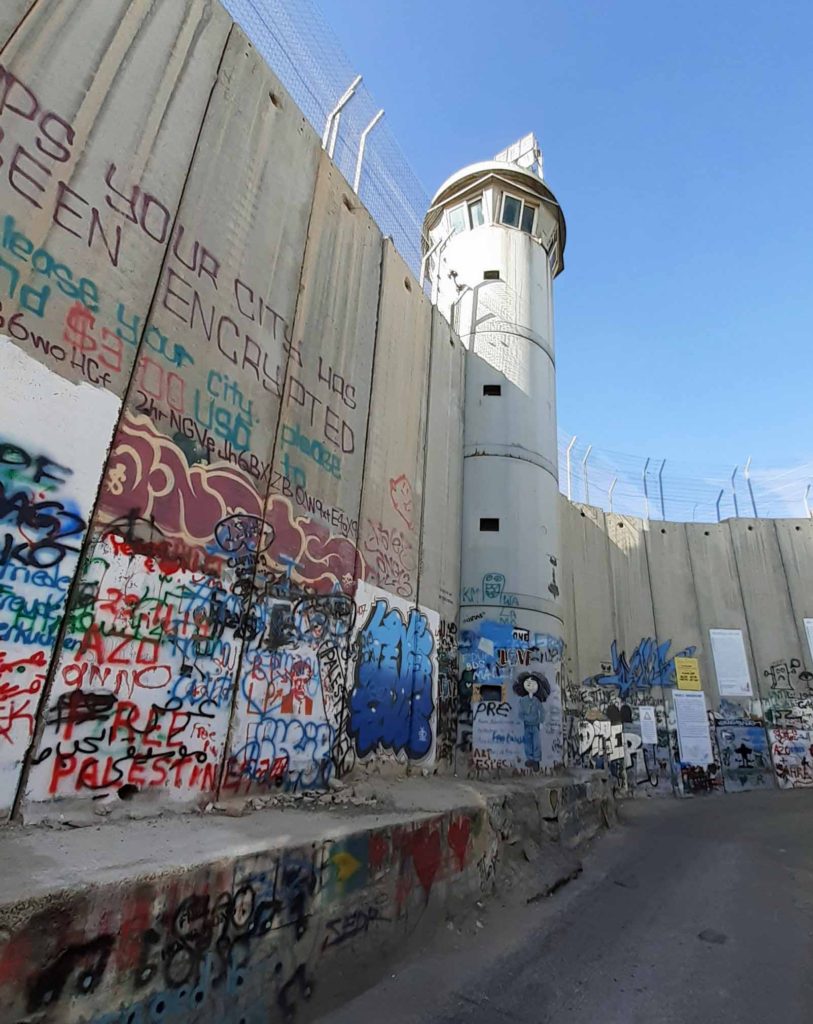 Separation wall and watchtower in Bethlehem 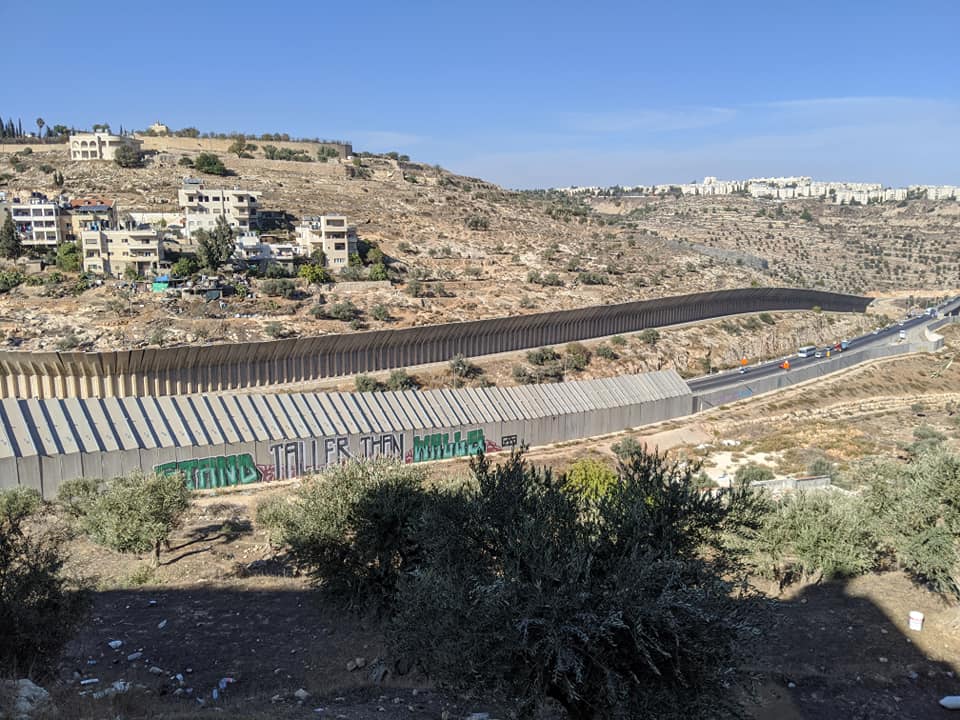 My time in Bethlehem was largely spent attending two Palestinian Christian-led conferences, Kairos Palestine and Sabeel. Toward the end of the Sabeel Conference, we visited the Dar al-Kalima University College of Arts & Culture in Bethlehem, founded by Evangelical minister The Rev’d Dr Mitri Raheb. It seemed fitting during Advent in Bethlehem that Dr Mitri would deliver a Bible study linking the nativity narrative with the current day reality for Palestinians living in the Holy Land. For Palestinian Christians the comparison could not be more obvious. Jesus was born into an occupied land, as are they. Jesus and his family became refugees seeking safety, as have done millions of Palestinians in 1948, 1967 and to this day due to the actions of the political State of Israel (not to be equated with Biblical Israel). Every day Palestinians wake with the anxiety of not knowing what that day will hold. They wake actively seeking hope to make it through the day.

I met many exceptional people, both Palestinians and Internationals. One such person was a gifted writer, Mercy Aiken from the USA. Prior to COVID-19, Mercy had lived and volunteered at the Bethlehem Bible College (BBC) for almost three years. Upon seeking Mercy’s permission I share with you below excerpts from her article ‘Yet in Thy Dark Streets Shineth’ and her impressions of Bethlehem. Her words paint a picture that transports you to those ancient streets and brings them alive:

“Like the rest of this land, Bethlehem is steeped in mystery, liturgy, history, tragedy, absurdity, irony. To enter Bethlehem is to set foot inside a living museum. It is to breathe the dank air of the caves where Jerome translated the Latin Vulgate and thus charted the course of the Western World. It is to run your fingers across the crosses carved by Crusaders in the marble columns of the church. It is to mingle with men in brown Franciscan robes, nuns in the white and blue garments of the Missionaries of Charity, and the various Orthodox denominations in their ornate caps and capes. It is to walk the street with ladies in Hijabs, men in traditional Arab Keffiyehs and Eastern European pilgrims with shawls over their heads. It is to wonder for a brief moment, what century exactly, you are living in.

Bethlehem is the pale stones of Star Street, where Christians have lived for over a thousand years; now a UNESCO World Heritage Site. It is a graffiti-covered separation wall that surrounds the city on three sides. It is crowded refugee camps where kids play with marbles in narrow streets. (There are few green spaces left in this densely populated municipality; a mingling of three towns, three refugee camps and several large and growing Israeli settlements and checkpoints).

Bethlehem is the sweet smoke of the hookah and incense, the fragrance of bees-wax candles and strong Arabic coffee mingled with an occasional waft of tear gas, skunk water or the dark black smoke of tires burning in the street. It is uprooted olive trees whose roots once clung to the soil through the birth of modern Israel and the Palestinian Nakba [‘catastrophe’ of 1948]; through the British Mandate; through the Ottoman Empire and even beyond. Some of these olive trees were saplings in the days of the Crusaders. And some of them were old even then…

‘Don’t come to the Holy Land if you are not willing to talk about religion and politics,’ said a wise friend during my first week at BBC. ‘They permeate everything here. Some tourists just put on rosy glasses, but this place demands more. A visit here should compel us to deeply examine what we believe and the consequences of our beliefs.’

Here is where at least two different ideas of what is called ‘prophetic’ face each other uneasily. One face focuses primarily on various eschatological interpretations of events foretold; an end-times chart in his hand. The other face focuses primarily on God’s heart for justice, mercy and speaking truth to power; a measuring rod in his hand. These faces must come into agreement, but how? Must one of them change the expression of its face? If so, which one? These questions are not mere philosophy in Bethlehem, but matters of life and death…

I came to Bethlehem because I wanted to see His face in the very centre of Christianity; a place that in some ways now sits ‘outside the camp’. And yet, in these dark streets, the light still shineth. Jesus, You are walking in the West Bank, too. I see Your footprints everywhere, fresh and bright at this morning’s sunlight.” 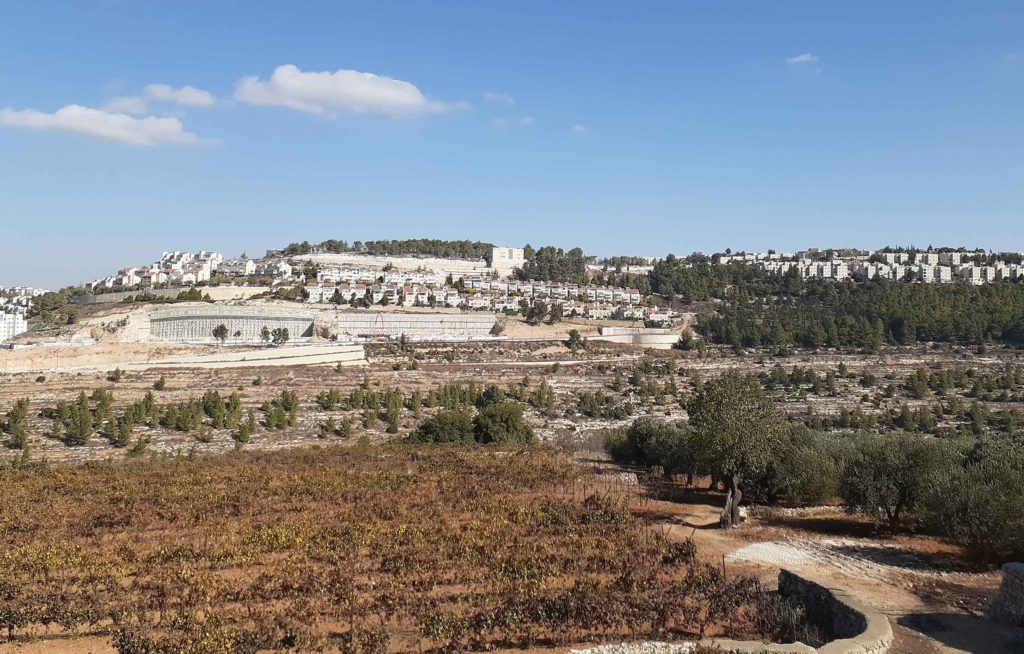 It saddens me that many Australian Christians don’t know what is actually going on in Israel and Palestine. Many church-led tours are conducted through Israeli tour companies which present one viewpoint and limit the exposure pilgrims have to see and hear from Palestinians. They go on tours that take in the Biblical sites, looking at ancient stones, but fail to meet and talk with the ‘living’ stones – Palestinian Christians. They fail to recognise that the oldest Christian community on earth is under constant, unrelenting threat from the current day Empire. The Christian Palestinian narrative is often overlooked in conversations about the Holy Land. Palestinian Christians exist, and they not only dwell in Bethlehem, but also in Jerusalem, Nablus, Ramallah, Jenin, Hebron, Tulkarem and Gaza, as well as the Galilee area of Israel, and they long for the global Church to hear their cry for hope.

One such way is to learn more through engaging with two Palestinian Christian organisations. Kairos Palestine issue Christmas and Easter Alerts that provide reflections, insights, prayers and actions. Sabeel distribute a weekly prayer guide, as well their Kumi Now weekly initiative that highlights different organisations working on the ground in Palestine and Israel for a just peace. Palestinian Christians have a unique understanding and perception of the Biblical text through their lived experience of dwelling in the land that Jesus walked under in similar circumstances. And they remind us, “Still, the only hope of the world is in the light of a star that neither tanks nor fighter planes nor separation walls nor huge search lights can keep from penetrating the darkness.”