Every Sunday afternoon, my mum would set out her favourite pen and an assortment of fine note papers, and then sit down and reply to all the letters she had received that past week. As she finished each letter, she would carefully fold it, place it in the matching envelope and attach a stamp chosen for its relevance to the receiver. Sometimes she would put together a small parcel and add a higher value stamp, especially if she knew the receiver was collecting stamps and didn’t have “that one”.

As the replies came back during the week, she would take the letter out of the envelope, carefully cut off the stamp, and place it in a bag marked ‘church missions’. When the bag was full, she would take it to church to be collected by a mission society.

I am a member of the local Anglican Board of Mission (ABM) committee, and over the last four years, I have gathered many bags of stamps and boxes of stamp albums from around our Diocese and delivered them to our stamp coordinators. On a recent weekend, I witnessed the next step in the stamps’ journey – a stamp auction with the proceeds going to support ABM’s mission partners in Australia and overseas.

“I am a member of the local Anglican Board of Mission (ABM) committee, and over the last four years, I have gathered many bags of stamps and boxes of stamp albums from around our Diocese and delivered them to our stamp coordinators” (Sarah Gover)

As I entered the hall, I saw over two hundred sorted ‘lots’ and nearly 50 hopeful buyers eagerly looking through each bag, folder and box, searching for a unique, rare treasure. After two hours of viewing, the bidding began. Bags of assorted Australian stamps still on paper sold for $18-24 per kilogram. The albums, books and assorted boxes attracted various amounts depending on the buyer’s wants and needs. Occasionally, someone must have spotted something highly desirable because two separate album pages fetched over two hundred dollars each. After nearly three hours of bidding, the new owners carefully collected their stamps, put them into the boot of their cars and drove off.

One buyer told me that the mixed bag of stamps he purchased were going to a special school where the young people would have fun looking at the stamps, talking about the pictures, learning the joy of collecting, all while developing their fine motor skills as they put them into album pages. I think my mum would have been happy if her everyday stamps had gone on to give others such joy.

This one stamp auction raised $2890.40 for ABM’s projects and partners. Future auctions are already scheduled for April in Brisbane and July in Roma. 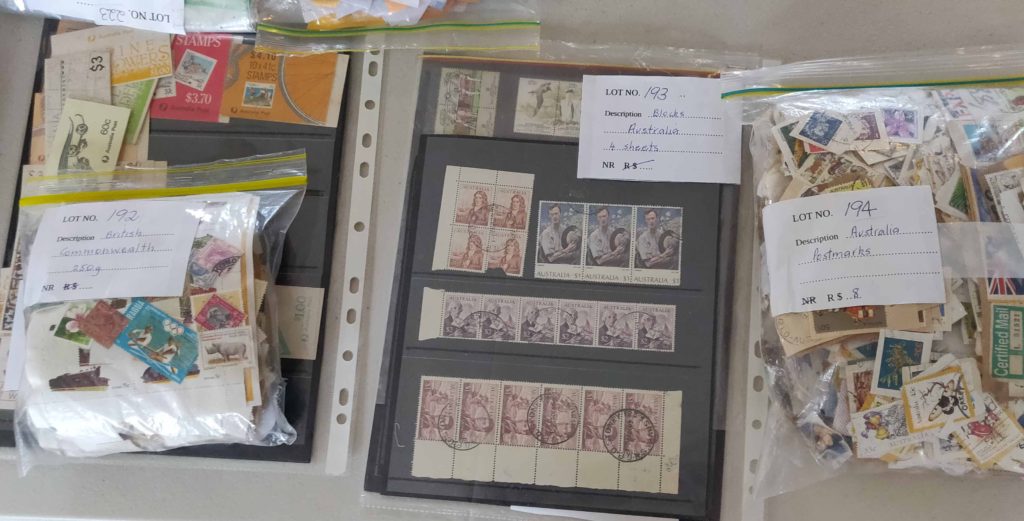 “The albums, books and assorted boxes attracted various amounts depending on the buyer’s wants and needs” (Sarah Gover)

The auctioneer told me some stories about the letters he had collected; letters often separated from their stamp. He said letters that gave an insight into our history were just as valuable as the stamps. He had recently purchased a letter from a father to his estranged daughter on the eve of his departure to fight in World War I. Another letter from a son working on a remote cattle station at the turn of the 20th century asked his mother not to send any more socks, as all the station workers already had two pairs each.

I still have a couple of boxes of Mum’s letters that she wrote to me in her Sunday afternoon writing sessions. I am not sure if I would ever want to sell them, but I know that the ABM stamp auctioneer will happily take them and sell them for mission if I did.

Seeing a stamp auction has renewed my motivation to gather up donated stamps, stamp albums, and now letters, from around our Diocese. Every stamp donated adds up.

These items can be dropped off at St John’s Anglican Church, Burleigh Heads; Good Shepherd Anglican Church Bundaberg West; St John’s Cathedral, Brisbane; St Luke’s, Toowoomba or the Parish of Goodna. If none of these drop-off options suits, please contact me (Sarah Gover) via sarah.gover@anglicanchurchsq.org.au or 0430 082 865 and I’ll find a way to get them to our dedicated stamp coordinators Brough and Margaret Warren.