The voice on the phone was that of Bishop Adrian Charles: “The Order of Saint John of Jerusalem needs music for some of their worship services. I wonder if you and your choir could help?”

I knew little of the Knights of The Order of Saint John of Jerusalem Knights Hospitaller in the mid-90s. I discovered that Bishop Adrian was the Prelate of the Order, that is, the chief cleric in Australia. I was the Director of Music at Holy Trinity Church, Fortitude Valley, with a choir whose members were willing to take music ministry beyond their choir stalls. So we did help, and after doing this for a few years I was honoured by being made a Serving Brother of the Order, and two years later (in 2002) being created a Knight of Honour. The rank of Honour is the basic rank from which one can advance in recognition of service given.

The full title gives a description of who we are – Knights and Dames: we are recognised world-wide as Heraldic and Chivalric; St John: our Patron Saint is St John the Baptist, also known as John of Jerusalem; and, Hospitallers: the Crusader Knights built the first hospital in Jerusalem in the 12th Century and many more at later times and other places. Our motto is Pro Fide Pro Utilitate Hominum, which means ‘For Faith and for Service to Humankind’. Our emblem is the Amalfi Cross, also known as the Maltese Cross, the eight points of which symbolise the Beatitudes. We take vows at investiture based on the Benedictine Rule. We are about 300 strong in Australia, ecumenical and adhere to the aims of those original Crusaders to minister to “Our lords the sick and our lords the poor”. 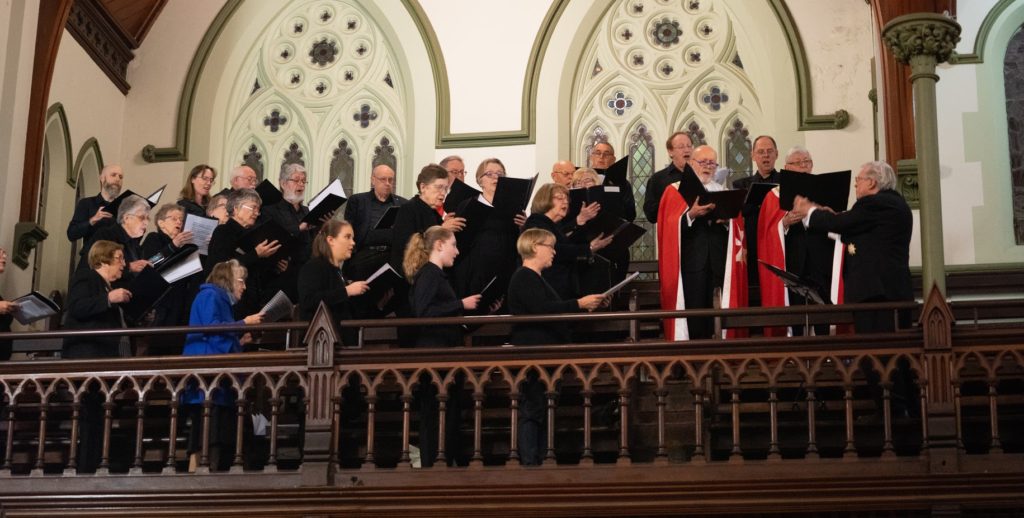 The Choir of St John singing the Coronation Anthem ‘I was glad’ (H. Parry) during the 2021 Investiture at the Albert Street Uniting Church, with Charles Clark conducting on the far right (Image by Philip Andrews)

When, eventually, the Turks drove the Knights out of Jerusalem, they moved to Rhodes, then to Cyprus, and finally, in the 16th Century, to Malta. By far the greatest event in their long history was their defense of Malta against a siege by Suleiman the Magnificent in 1565. With 700 Knights of St John and 8,000 soldiers they repelled Suleiman’s army of 40,000. The Knights remained in Malta for another three centuries. Most of the fine architecture, including hospitals and churches, in Malta today was built during that time.

The Order remained as one unit, consisting of Langues (national groups) relating to the countries from which the knights came, until Napoleon drove them out in 1798. Then some went to Italy and remained under the Pope. The Branch I belong to went to Russia under the protection of the Czars, and after 1917 moved to the Czar’s cousin, King Peter II of Yugoslavia.

The English Langue eventually regrouped under Queen Victoria and is responsible for the well-known ambulance and life-saving services. The official branches of the Hospitaller Order around the world have their continuity guaranteed under a Constitution given by King Peter II in 1964.

We are an ecumenical Order, enjoying the company of mainly Anglican, Roman Catholic, Uniting Church and Lutheran members. The Order came to Australia in 1969, with the first investiture of new Members in 1974 in St Thomas Aquinas Catholic Church, St Lucia. There is a strong Anglican presence locally. The Prelate is The Rev’d Canon Emeritus Bruce Maughan OAM. A number of lay and ordained people in our Diocesan community are members, including Bishops John Bayton, Bill Ray, John Parkes and Jeremy Greaves, as well as some lay people, parish priests and senior clergy from other denominations.

Admission to the Order is by invitation only. In South East Queensland, the Queensland and Sunshine Coast Priories welcome new members in annual investitures in St John’s Anglican Cathedral, St Stephen’s Catholic Cathedral and the Albert Street Uniting Church in rotation. The Darling Downs Priory hold their own investiture independently, often in the Catholic Cathedral in Toowoomba or in the major Lutheran Church. Prospective candidates must have demonstrated service of benefit to the community and a potential to assist with the charitable work of the Order. They should also, of course, subscribe to Christianity through their respective Churches. 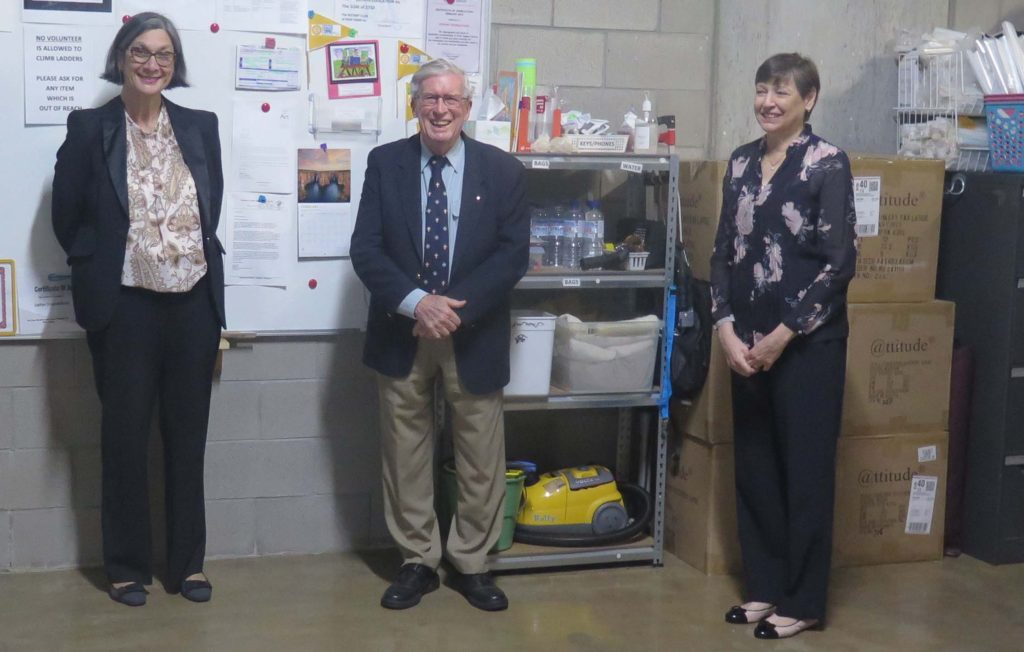 In Zephyr’s office/store room (L-R) are Brisbane Commander, Dame Leanne O’Shea; Prior Charles Clark; and, Mrs Carmel Martin, Co-Manager of Zephyr Inc. which supports children impacted by family and domestic violence. Zephyr will be the charity supported by the Queensland Priory for at least the 2021 to 2023 period

The Charitable Fund is acquired through formal dinners, soirees, raffles and other community functions, sponsorships, and direct donations from members. From this, donations are made to charities, the whole being administered by the registered Company of the Order of St John. Mostly we, as an organisation, do not have direct contact with ‘the sick and the poor’ whom we say we support. We are one line behind the charity organisations that do that. But there are some examples of ‘working at the coal-face’, such as the Western Australian Priory preparing and handing out ‘street bags’ to people sleeping on Perth’s streets; volunteers from the Brisbane Commandery working in the Holy Trinity Parish Pantry in Fortitude Valley; the Darling Downs Priory working with the Rural Fire Brigade to provide a $20,000 water tanker; and, the Sunshine Coast Priory providing a car to transport renal patients to hospital. 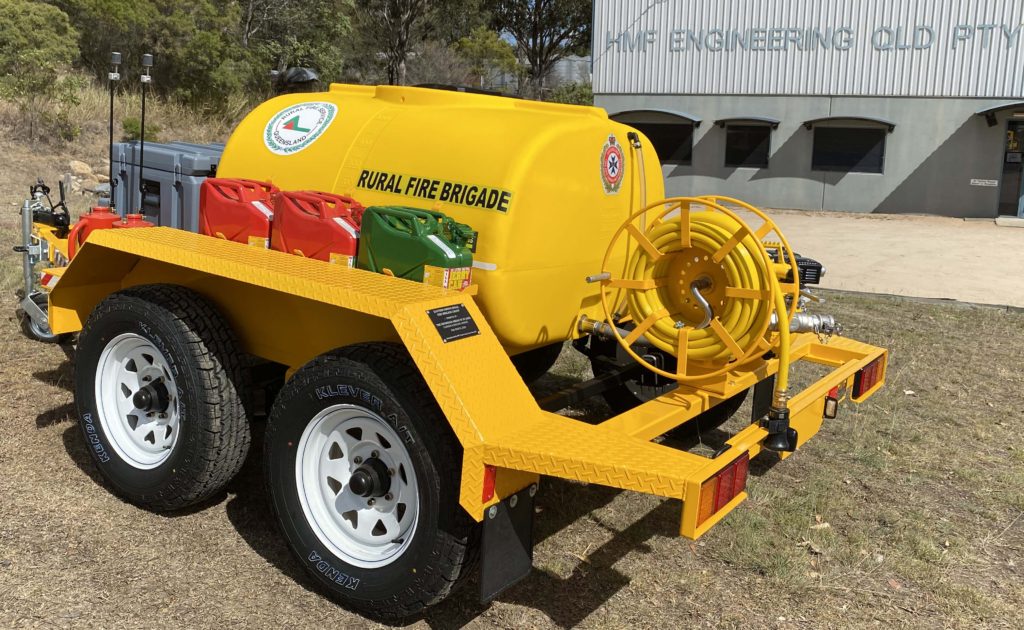 The Darling Downs Priory worked with the Rural Fire Brigade to provide a $20,000 water tanker

There is a growing desire to work at the frontlines so that we will have more direct contact with vulnerable people on the margins. In this way we will relate more closely to the ‘Vision for the Anglican Church Southern Queensland’ announced by the Archbishop recently.