There is strong Anglican involvement in a long-running public campaign to keep in Australia an asylum-seeker family threatened with deportation.

One of the founders of the campaign, Angela Fredericks, worships at St Gabriel’s in Biloela, a small outback Queensland town. It is here that the Sri Lankan family now faced with deportation, the Murugappans, lived before their forcible removal to detention in 2018 when their visas expired. An assistant bishop in Brisbane, the Rt Rev’d Jeremy Greaves, has also been campaigning on the family’s behalf.

Nades Murugappan and his wife, Priya, both Tamils who say that they fear persecution in Sri Lanka, arrived separately in Australia in people-smuggler boats. They met and married in Australia, and have two Australian-born daughters, Kopika, six, and Tharnicaa, four. They are currently living in temporary community detention in Perth, Western Australia, after being removed from the Australian Government’s detention centre on Christmas Island in the Indian Ocean, where they were the only detainees. Their removal followed a widespread outcry when Tharnicaa had to be evacuated urgently in June to a Perth hospital, as she was suffering from pneumonia and sepsis.

After the failure of multiple court appeals, the family are now barred from seeking new visas when their current temporary visas expire on 22 September. An appeal to the Federal Court on 16 September to have the bar lifted is now probably the family’s last hope.

Ms Fredericks, a social worker who has served her parish as a churchwarden and synod representative, first met the family when the children attended the parish’s children’s programme. She became a close family friend. She said that she firmly believes that God has a plan for the family. 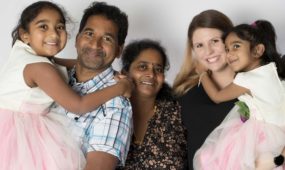 An open letter, a hand-written card and thousands of prayers

“I have seen God’s hand in this journey from the start,” she said. Not only has her own parish given her constant support, but so, too, have Anglican parishes across the country. “We have never felt alone with a nation of support behind us,” she said.

Bishop Greaves instigated an open letter to the Australian federal government from bishops across 16 Australian Anglican dioceses at the time of Tharnicaa’s hospitalisation. Noting that more than half a million Australians had signed a petition for the family to be returned to live in Biloela, the letter said that, “as Christian leaders, we echo the call for a compassionate, fair, safe, common sense and permanent solution. We stand in solidarity with this young family seeking peace, safety and stability, and with the Biloela community who are waiting to welcome them back home.”

He was heartened that such a cross-section of bishops publicly joined forces to support the family and the Biloela community. To date, however, there have been only limited responses.

“While I am unsurprised by the minimal engagement from the Immigration Minister and other open letter recipients,” he said, “I am very heartened by the six Coalition MPs who have spoken out publicly on behalf of the young family and the Biloela community members who are working so hard to bring the family back home to Bilo.”

He continued: “I will continue to do whatever I can to support the family, Angela, and the wider Bilo community, and I know that a number of other bishops are also very engaged in doing what they can, including contacting their MPs.”

Editor’s note: here are three things you can do to help support this young family: