On the last Friday of Term 3, when many Whitsunday Anglican School students were looking forward to a relaxed holiday break, Emmett Withers travelled to Brisbane as one of a dozen Year 12 students from across Queensland who received the prestigious 2021 Secondary Schools Citizenship Award from The Order of Australia Association, Queensland Branch.

Emmett attended the special presentation at Parliament House in Brisbane, where His Excellency the Honourable Paul de Jersey AC CVO, Governor of Queensland, presented the award. Emmett received a commemorative plaque and a Certificate of Merit in recognition of his service to Whitsunday Anglican School and its community.

The awardees were required to address the gathering, and Emmett’s message was clear and relevant to the current global situation. He concluded his speech by inviting those in attendance to change the world through small acts of service to others. Emmett tells his story below.

“We are only as strong as the team that is behind us.”

Isn’t this truer now than ever? Our societies are finding more and more the positive benefits in a friend; a companion to march along with in the darkest days of our generation. With the age-old statement first postulated by the great Albus Dumbledore, “happiness can be found even in the darkest of times if one only remembers to turn on the light.” This quote, of course, lit up my childhood and opened the flood gates for the monumental memories to stream out.

I was influenced by many individuals I held dear and admired to great extents throughout much of my childhood. The people you would expect have left a lasting impact – my mother, father, Nanna and Poppa, aunts and uncles. Though, there are individuals who work behind the scenes that have paved my inspirations and aspirations.

I have a very distant cousin – whom I have never met personally – who is an international business lawyer. I have engaged in simple exchanges such as ‘liking’ her Facebook posts and the odd phone call, but I have never had the opportunity to sit over a cup of coffee and chat about life. Yet, my pathway is forecast to be on the same trajectory as hers – Emmett Withers, international business lawyer. And, on the basis that she is a part of my team, I have much respect for her influence on how I approach life.

For me, my team has defined me as the young man I am proud to be. Because, in essence, the people who made me – well – me, are quite extensive. I receive their bundles of wisdom, smiles, passion, and love, add my personal touch, and the outcome is a better version of myself. Ever since I was a child, my family has been there for me – nurturing me, caring for me, loving me – from the days I couldn’t walk to now, they have never stopped supporting me.

The day I turned five, I had a great idea. It was revolutionary, and I thought it would change the world for the lost and abandoned animals of Mackay. I, along with my team, ended up founding Emmett4Animals, a not-for-profit charity with the sole goal of supplying local animal foster carers with necessities, such as animal food, bedding and medicine. Throughout the years, my team and I have developed and nurtured this idea, which I held so dear and translated into a charity that can donate upwards of two tonnes of animal essentials annually.

When I turned seven, I made my first television appearance. My mother and father were standing behind the camera, cheering me on. When I turned eight, I raised my first tonne of animal food and my first two tonnes when I was 10 – when I posed next to the mayor with Nanna, my Poppa and my Aunt Kaylene as a unified team. When I was 11, Emmett4Animals was founded, and my father, our resident accountant, was by my side signing the important paperwork.

When I was 12, we merchandised, investing in lovely attire. My mother and Nanna chose colours and picked styles. The year I turned 13 was quite fantastic. Our charity raised over two tonnes of animal food and partnered with regional businesses to broaden our support. Emmett4Animals was now a well-oiled machine ready to churn out a bumper crop, so to speak, to donate to local animal carers. When I turned 14, we entered cyberspace and identified a hidden talent in my Pop – he is a fantastic model. 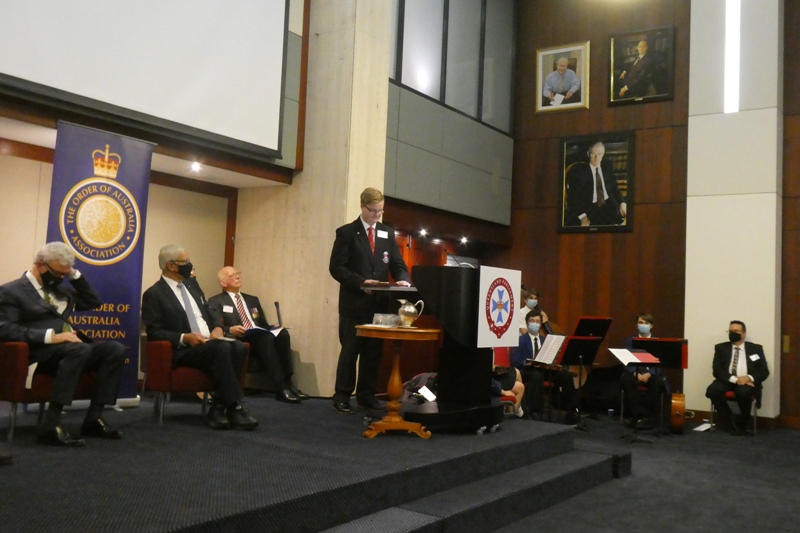 Emmett Withers giving his acceptance speech at Parliament House in Brisbane on the last day of Term 3 in 2021, when he received the 2021 Secondary Schools Citizenship Award from The Order of Australia Association, Queensland Branch

In 2021, I have matured, grown and reflected on my 17 years of living. And through that reflection, I have gained so much appreciation for the little things in life.

At the beginning of the September holidays I was invited to attend Parliament House, Brisbane, where His Excellency the Honourable Paul de Jersey AC CVO, Governor of Queensland, presented me with the 2021 Secondary Schools Citizenship Award from The Order of Australia Association, Queensland Branch.

Personally, this recognition was never expected, but receiving it highlighted that the work of Emmett4Animals is not going unnoticed. Being able to mix with people outside of my social sphere, I am never afraid to share with them these stories about my team. I enjoy sharing this narrative because I stand metaphorically before you all as a single person, I stand before you with my united team behind me, and I challenge you to do the same.