On 28 June 1914, the assassination of Archduke Ferdinand of Austria-Hungary plunged Europe into what would become the First World War. Within months German forces invaded France and Belgium. Britain, through its alliances, was drawn into the conflict to support the French. To an extent, they succeeded, in that they stopped the Germans crushing France which, in turn, prevented the German forces from turning to the Eastern Front, and Russia.

Instead, the two armies held each other off in a stalemate. Both forces began to dig in, utilising what little cover they could find and digging, with small trenching tools that they each carried, in order to afford a few more inches of cover and safety.

These were not the 18-year-old conscripts that seem to be highly represented in modern-day cinema – they were professional or recently recalled soldiers. They were not all in the prime of their youth, nor in peak physical condition, but they knew, because they had been promised, that this war would be over by Christmas. By December 1914, the German advance had been halted at the cost of almost 90,000 British soldiers.

The digging led to small trenches being formed. Adjacent trenches eventually joined up to similar trenches nearby, forming a front line. And that front line was wet, muddy and cold – literally freezing cold. Snow began to fall. It was the most terrible of existences that the men on the front lines of both sides experienced, which helps us to understand what happened next.

On Christmas Eve 1914, temperatures plummeted. Frost formed. Mud hardened. British High Command believed an attack by the German forces was imminent and called for “special vigilance” to be maintained throughout this period. And, the German forces were contemplating something – but not an attack. Instead they erected Christmas trees – with candles – in the trenches. The British forces could see them from their own trenches a mere 30 yards (25 metres) away. The Germans opened their post from home, including Christmas gifts from loved ones, since the German culture is such that they open their gifts on Christmas Eve.

And, then they started to sing carols.

At first, the British army was suspicious, until the strains of ‘Stille Nacht’ (‘Silent Night’), a carol from the early 19th century that was originally composed in German, crossed No-man’s-land. Soon British voices joined in the well-known carol. When it ended, words of greeting (rather than the usual words of insult) were shouted across the trenches. “Merry Christmas, Fritz” was called out. Many Germans could speak English and would call back “Merry Christmas, Tommy”. This led to banter between the two armies across one of the most dangerous areas on the planet. This badinage continued throughout the night of 24 December 1914 along the Western Front. Though not everywhere.

Some sectors still had hostility, notably those where the German forces faced the trenches of the occupied nations of France and Belgium, who had suffered invasion. However, almost all of the British/German sectors seemed to have a temporary cessation of hostility.

On Christmas Day, mist fell. The British received their post from home. Princess Mary had set up a gift fund to ensure that every single British soldier received a gift, the total value of which would be over $20 million today. And, they noticed the silence. The artillery had stopped firing. Birdsong was heard over no-man’s-land. The soldiers began to call out words of greeting to each other. This was no ruse – this was humanity at its finest. Gradually, soldiers climbed out of their trenches, responding to each other as human beings, rather than as enemies. No-one was shooting. They walked into no-man’s-land, trusting each other and welcoming each other as they did so. This was the first time they had really seen each other – as people welcoming each other in the spirit of Christmas. Nobody thought of opening fire.

Temporary truces are not unusual – but they are normally planned by the senior officers to retrieve the wounded and bury the dead. This, however, was spontaneous and took place in many places all at once because of the nature of the day, and was initiated by the soldiers on the front line. The dead were buried. The sick were taken to infirmaries. In some cases, the German units even gave wooden crosses to the (somewhat impoverished) British to mark the places of burial. Both nations came together for possibly the most important religious services ever as joint funeral services took place for the dead on both sides. 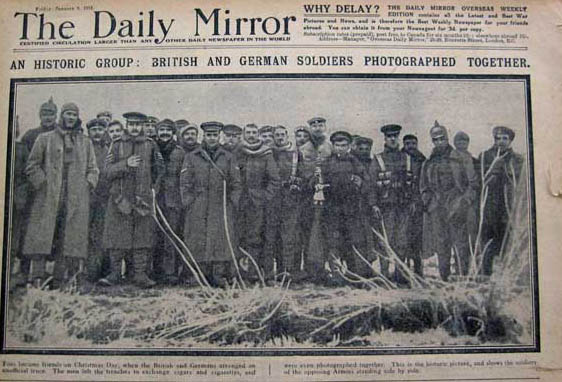 And, then they exchanged gifts. Some gave gifts of cigarettes or chocolate. Some swapped buttons denoting rank. Others merely signed notebooks. Everyone tried to give something to their opponents of just a few hours ago. A few individuals, on each side, had cameras and took photographs of the events, which stunned the European press when they were sent back home. While people were settling down to eat their Christmas dinner, their loved ones were shaking hands with the very person they had being trying to kill just a few hours before. “Fancy shooting at the enemy and then going across to wish them ‘Happy Christmas’,” wrote one soldier. Another commented that “there was not one atom of hate on that day”. It was reported by a German soldier that “one of the [British] officers clasped his hands and raised them to heaven and said ‘my God, why can we not all have peace and let us all go home?’”

When the day ended, the men knew what had happened. They knew its significance. One day of peace in which people welcomed each other. The following day saw a return to hostility.

Sadly, the truce did not continue much beyond Christmas Day. Due to the changing of battalions, the edicts from High Command and the very nature of war, the truce ended – not simultaneously, but within a week.

Historians believe that such an event, with its iconic impact, made no actual difference to the course of the First World War. The Christmas Truce was never (apart from in very few places) repeated. Partly this was due to orders from above, but also because the nature of war changed significantly during 1915 – it became nastier with far more civilian casualties involved. In particular, the British army then became made up primarily of volunteers who joined because they had lost relatives in the early months of the war.

But, for those who were there, this was “a brief interlude of peace that we remember to this day”. It was a celebration that reinforced the central theme of the Christmas story: “Peace on Earth”.