Like many others I first encountered John the Baptist as a child listening to Bible readings during Sunday services and in school Religious Education classes. During these services and classes, John’s familial connection to Jesus and his importance in preparing the way for Jesus’ ministry were highlighted.

The humble and faithful John we see in the Bible provides – for me, at least – a guide for how to live life and practise faith authentically. Instead of seeking the limelight and glory, John quietly stood up for what is right and good.

An example of John’s humility and faithfulness is found in Matthew 3.11-15 when he acknowledged the overarching power and authority of Jesus, then stepping aside for him:

“‘I baptize you with water for repentance, but one who is more powerful than I is coming after me; I am not worthy to carry his sandals. He will baptize you with the Holy Spirit and fire. His winnowing-fork is in his hand, and he will clear his threshing-floor and will gather his wheat into the granary; but the chaff he will burn with unquenchable fire.’

Then Jesus came from Galilee to John at the Jordan, to be baptized by him. John would have prevented him, saying, ‘I need to be baptized by you, and do you come to me?’ But Jesus answered him, ‘Let it be so now; for it is proper for us in this way to fulfil all righteousness.’ Then he consented.”

While much of the New Testament naturally concentrates on the life and ministry of Jesus, details on John are comparatively minimal despite his significance. The New Testament briefly focuses on his role as a prophet and preacher in helping prepare the way for Jesus’ early ministry.

The Bible tells us that John and Jesus were maternal kin. We are told that their mothers Elizabeth and Mary, respectively, were cousins. However, the word “cousin” in Greek, suggenis, translates as “kinswoman”. Whether they were cousins or more distantly related, Elizabeth and Mary had a very close bond. Mary stayed with Elizabeth while they were both pregnant, and after Mary’s arrival:

“When Elizabeth heard Mary’s greeting, the baby [John] leapt in her womb. And Elizabeth was filled with the Holy Spirit.” (Luke 1.41) 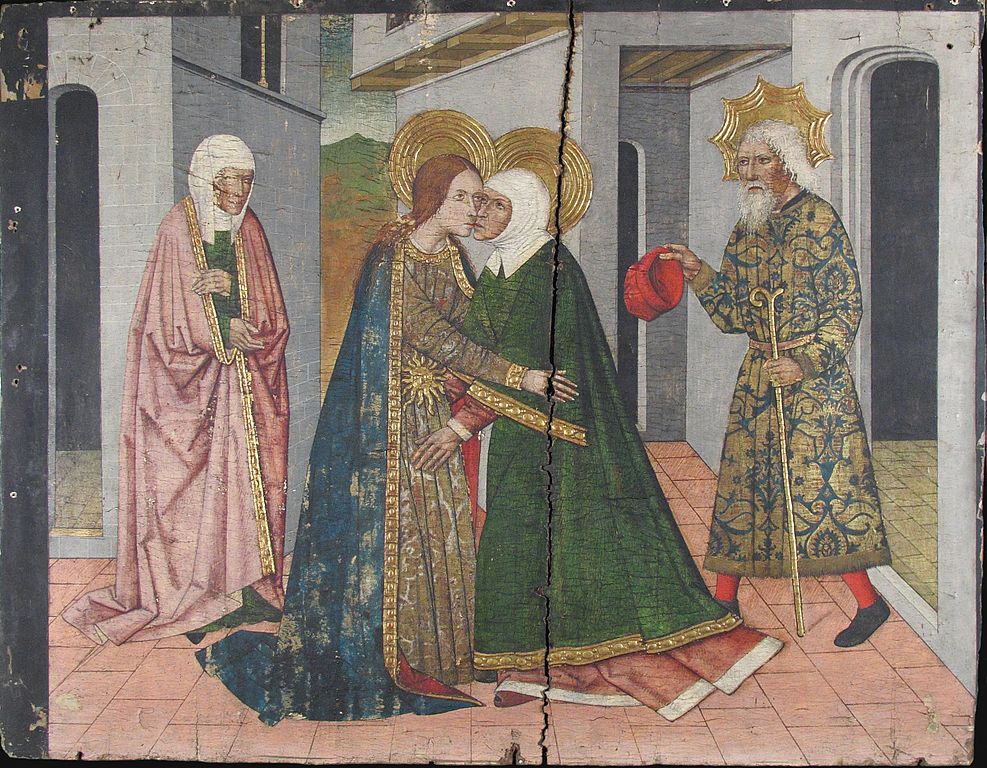 Just as Jesus’ birth was foretold to Mary by the Archangel Gabriel (Luke 1.26-38), John’s birth was foretold by Gabriel six months earlier to John’s father Zechariah, who was a priest (Luke 1.8-20). Gabriel told Zechariah that his son would prepare the way for Jesus:

“’You will have joy and gladness, and many will rejoice at his birth, for he will be great in the sight of the Lord. He must never drink wine or strong drink; even before his birth he will be filled with the Holy Spirit. He will turn many of the people of Israel to the Lord their God. With the spirit and power of Elijah he will go before him, to turn the hearts of parents to their children, and the disobedient to the wisdom of the righteous, to make ready a people prepared for the Lord.’”

While information on John is scant, some suggest that he was linked to the Essenes – an ascetic monastic community that thrived in Palestine from the second century BC to the end of the first century AD.

John commenced his ministry after withdrawing into the desert for a lengthy period. When he emerged in the lower Jordan River valley as a prophet baptising people, he:

“…wore clothing of camel’s hair with a leather belt around his waist, and his food was locusts and wild honey.” (Matthew 3.4) 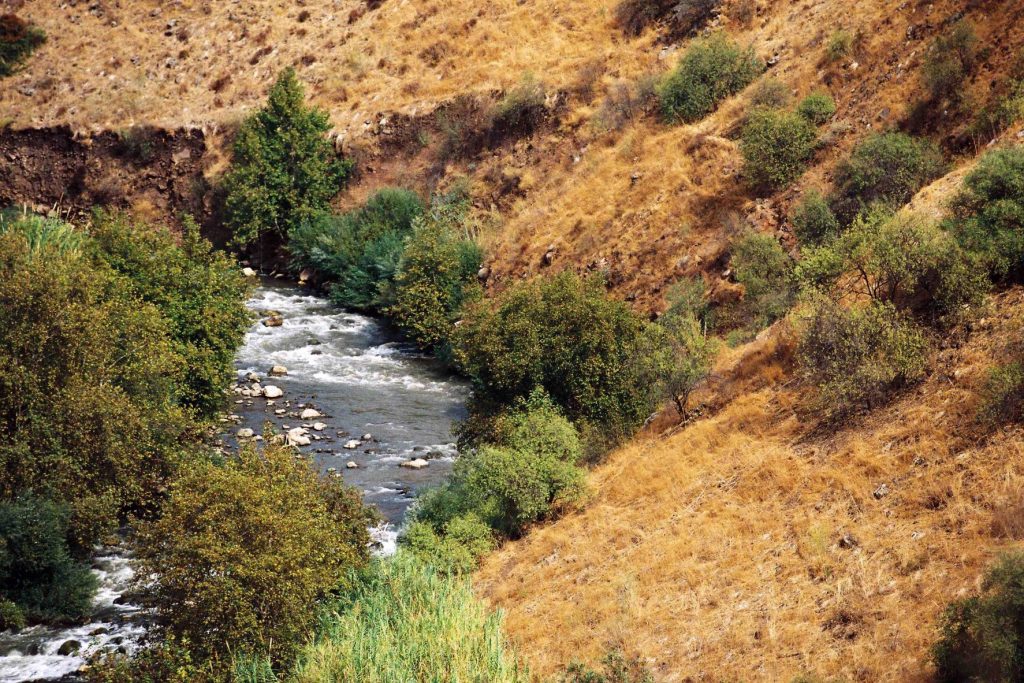 The Jordan River in Palestine

The public ministry of John commenced between AD 27-29, which is approximated based on helpful information provided in Luke 3.1-3 regarding who were the political leaders of the time:

“In the fifteenth year of the reign of Emperor Tiberius, when Pontius Pilate was governor of Judea, and Herod was ruler of Galilee, and his brother Philip ruler of the region of Ituraea and Trachonitis, and Lysanias ruler of Abilene, during the high-priesthood of Annas and Caiaphas, the word of God came to John son of Zechariah in the wilderness. He went into all the region around the Jordan, proclaiming a baptism of repentance for the forgiveness of sins.”

Over time John’s popularity and influence grew. He was arrested by Herod after John denounced Herod’s scandalous marriage to Herodias (because the union breached Jewish law) and Herod’s other wrongdoings:

“But Herod the ruler, who had been rebuked by him because of Herodias, his brother’s wife, and because of all the evil things that Herod had done, added to them all by shutting up John in prison.” (Luke 3.19-20)

In Matthew 14.1-12 we are told that Herod reluctantly ordered the beheading of John after Herodias’ daughter requested it in vengeance:

“Though Herod wanted to put him to death, he feared the crowd, because they regarded him as a prophet. But when Herod’s birthday came, the daughter of Herodias danced before the company, and she pleased Herod  so much that he promised on oath to grant her whatever she might ask. Prompted by her mother, she said, ‘Give me the head of John the Baptist here on a platter.’ The king was grieved, yet out of regard for his oaths and for the guests, he commanded it to be given; he sent and had John beheaded in the prison.”

Based on the work of Jewish historian (37-100 AD), Flavius Jospehus, some commentators argue that John’s popularity may have contributed to the execution order. It is possible that Herod was worried that John’s large following could have led to riots, which would have threatened his position as ruler if the Roman authorities deemed him incapable of keeping order in his province.

John is commemorated by the Church as a Jewish prophet and Christian saint. His feast day is 24 June. He is variously recognised as the patron saint of the sick, nurses, tailors, booksellers, printers, heart patients and firefighters, as well as of Jordan, Cornwall in England, Quebec in Canada, Puerto Rico and several Italian cities.

While John the Baptist’s ascetic life isn’t attainable for a city-dwelling Holy Hermits Online member like myself, I am inspired by his life of simplicity, his call for people to be just and charitable and how his ministry emerged from a period of hermit-like solitude.

St John’s life is marked by humility, faithfulness and courageous. So John gives me cause to think about the way I practise my faith and his example encourages me to thank God for the opportunity to serve my church and community.