Early on in 2022, my husband Charles and his brother John Elliott, at The Rev’d Graham Warren’s request, removed a dark curtain covering the inside of the east-facing clerestory window.

No one could remember when or why the shade cloth was installed. We think it was likely fitted to stop the morning sun glare shining into the eyes of the clergy. It was large, ill-fitting and unattractive.

To give some context, St Francis of Assisi Anglican Church was built in 1958 in the modernist style. It is a brick and concrete structure and the windows are made with glazed metal. The original frosted glazing varies in hue from pastel pinks to greys, which gives it a vintage look.

John Elliott lives on Cavendish Street, not far from St Francis. He and his brother, Charlie, are members of a local family who have worshipped at St Francis since it was built. The two brothers brought a long ladder and an angle grinder, and half an hour later the old covering was gone. John then reflected on what a marvellous large window it was, but how boring and bare it looked.

Over the years, I have often looked at the window wondering how it could be made beautiful. Other church buildings usually have something gorgeous in stained-glass, so why shouldn’t our church? However, stained-glass is expensive.

“How could we afford a stained-glass window?” I thought. It would take a lengthy process of design and fundraising and so I relegated this idea to the too-hard basket.

An alternative solution emerged as many great solutions do – an unexpected chat. John has a neighbour, Anthony Monaghan, whose family has owned Monaghan Signs since 1932. Alongside regular signage, they do vehicle wraps in vinyl. So upon chatting, John asked Anthony if the large St Francis window could be decorated with this method. “Yes!” was the answer.

John passed this idea on, and I then contacted Anthony so we could discuss a brief and designs. I have a design background and Anthony has a digital design team. I explained that I wanted the church building to have a stunning visual link to the outside and the gardens. We wanted passersby to notice and be interested in our beautiful church building and what happens inside.

St Francis of Assisi seemed the obvious subject. Anthony, an alumnus of Padua College – which was named after Franciscan friar St Anthony of Padua – is familiar with St Francis. We agreed that a digital image in the public domain, hence cost- and licence-free, would be a good place to start. We used Google to search for an image, considering a number before making our final selection. Consulting with the clergy, we chose a simple modern image of the famous Italian saint. 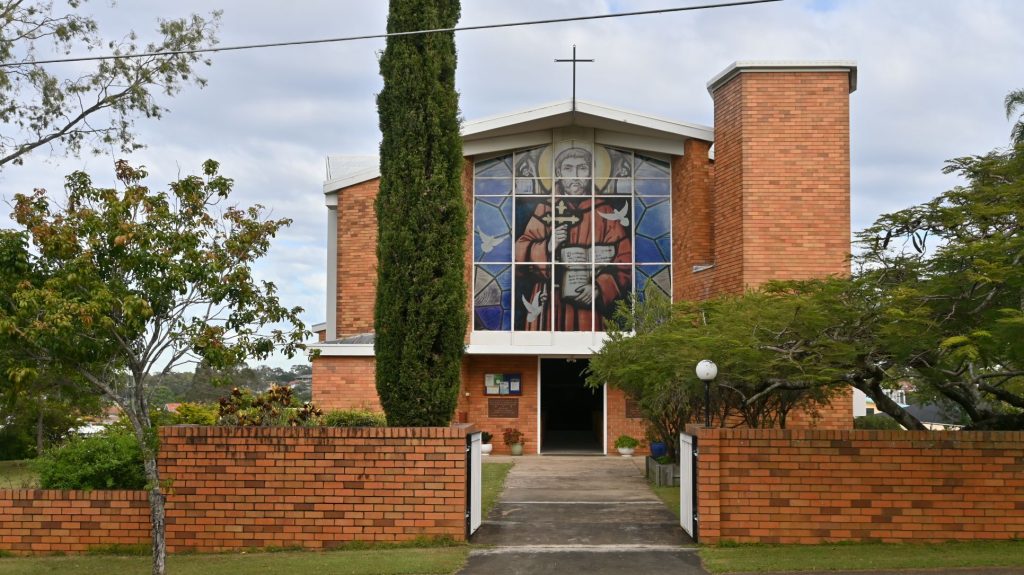 “Our new beautiful custom decal wrap of St Francis of Assisi was installed on a sunny morning recently with the aid of a cherry picker, one window pane at a time, in just a few hours and at a fraction of the cost of traditional stained-glass” (Liz Elliott, St Francis of Assisi, Nundah in 2022)

The original digital image was reworked to fit the numerous panes of glass in the large clerestory window. We had a number of things to troubleshoot or consider, including how the bars of the window frames would impact the image, especially St Francis’ face; colouring the Franciscan robes to match the exterior brickwork; placing the blue and purple blocks of colour on St Francis’ sides to give the illusion of stained-glass; and, the addition of white doves to make it clearer that the saint featured is St Francis of Assisi.

The decal’s image was printed in multiple pieces, each fitting one segment of the great window. Prior to installation of the decal, several glass panes were necessarily replaced because they were cracked or broken.

Our new beautiful custom decal wrap of St Francis of Assisi was installed on a sunny morning recently with the aid of a cherry picker, one window pane at a time, in just a few hours and at a fraction of the cost of traditional stained-glass.

At our first Sunday service following this installation, our faith community’s overwhelming response was one of joy, with many positive comments shared. Neighbours, friends and family have also commented on how the window looks larger now and what a lovely impression it makes.

We hope to get quite a few years out of our beautiful St Francis decal – time will tell. Although if or when St Francis does need replacing, a new look will also be exciting!