The original Uluru Statement From the Heart canvas was brought to St John’s Cathedral recently by constitutional lawyer and Cobble Cobble woman Professor Megan Davis, surprising those who gathered for 2022’s Brisbane Peace Lecture and the Celebrating Local Agents of Peace Awards.

Professor Davis is a constitutional lawyer from the University of New South Wales, and serves as an expert with the United Nations Human Rights Council’s Expert Mechanism on the rights of Indigenous peoples.

Professor Davis’ eleventh annual Brisbane Peace Lecture focused on the Statement’s reforms, the National Constitutional Convention where the Statement was signed and the nation-wide community dialogues leading up to the convention.

“Our Country, our land, is integral to who we are,” Professor Davis said.

“Our culture is a gerontocracy, which means that our Elders, our old people, lead decision making in communities, and are the cultural authority in our communities.

“The fundamental normative principle is that decision needs to be driven by community.

“So we designed a process that would enable us to seek advice from communities via a structured, deliberative dialogue process.

“What does this Voice look like enshrined in the Constitution?

“The referendum that we will have next year creates an enabling provision, so it sets up the power for the Parliament to make laws on a Voice.

“The provision to be inserted into the Constitution will say that the bricks and mortar of that Voice will be set up in a process supervised by the Parliament after the referendum.

“Around the world, this technique is known as the ‘decision to defer’ – it’s a decision to defer detail, not unlike the way in which the High Court of Australia was set up…recognised in the Constitution first and then set up in legislation later.

“We say that the design of the Voice should be done by communities after the referendum.

“This is consistent with the ethic of the Uluru dialogue – design done by community who are fully informed on the options before them.

“The first job of the Uluru Statement is the implementation of this Voice to Parliament.

“Why do we call it a ‘roadmap to peace’?

“We say the Uluru Statement is a sign of friendship. What we heard in all of the dialogues right across the country is that many of our old people are dying and they want some peace for their Country.

“One of the most prominent conversations in each of the dialogues was about our rapidly heating climate and climate change and how it was important for our communities to have peace, so that as a nation we can face what we are going to face in the future.

“We say that we need peace now and we say that the Uluru Statement From the Heart is the beginning of that conversation – the bringing together of First Nations peoples and all Australians. 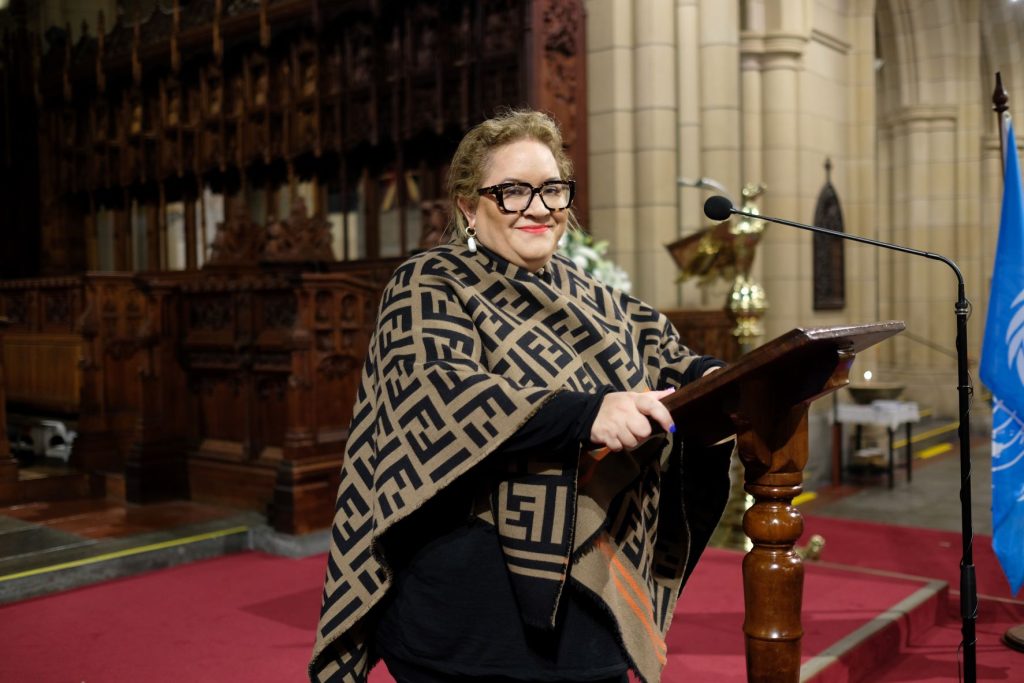 Professor Megan Davis’ 2022 Brisbane Peace Lecture focused on the Statement’s reforms, the National Constitutional Convention where the Statement was signed and the nation-wide community dialogues leading up to the convention

Following her International Day of Peace community address, Professor Davis’ invited all attendees to look at the Uluru Statement, with many delighted to hold it up and have their photo taken with the landmark canvas.

In response, the delighted emcee, The Rev’d Canon Dr Marian Free, acknowledged Professor Davis and all First Nations peoples for their graciousness.

“I am always overwhelmed by the grace and generosity of our Indigenous peoples, and to me the Statement says everything,” Dr Free said. 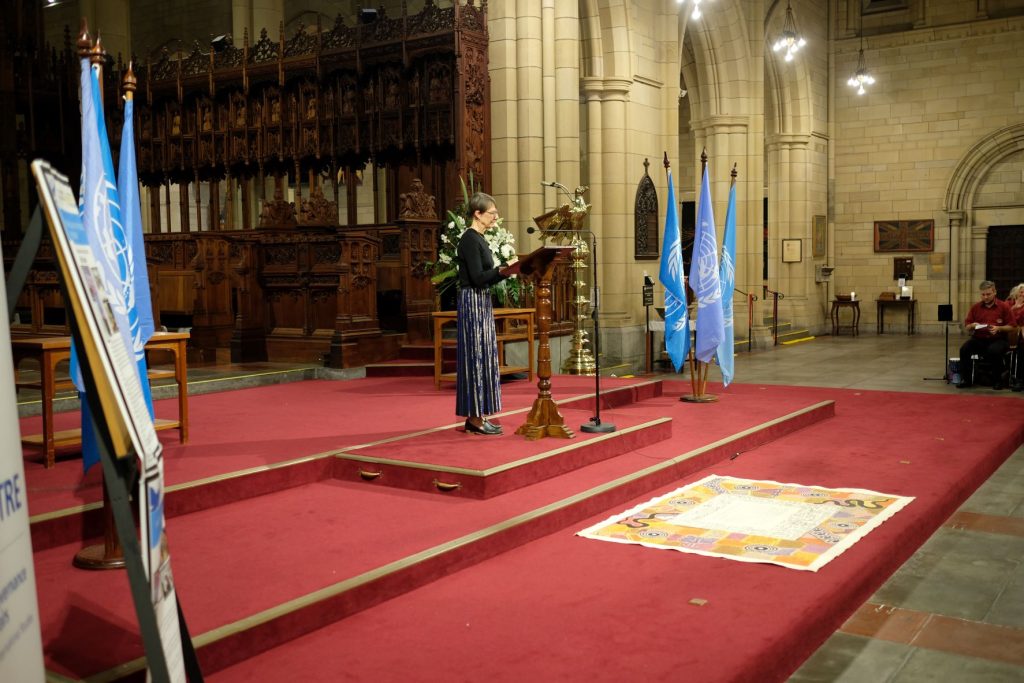 At the beginning of the formalities, Ngugi Elder Uncle Bob Anderson OAM gave a heart-warming Acknowledgement of Country in both Language and English.

“It’s good that we celebrate this occasion in this house of the Lord – Jesus who was known as the Prince of Peace.

“I thank everybody for being present here and I look forward to engaging in some conversation at the conclusion of these celebrations.” 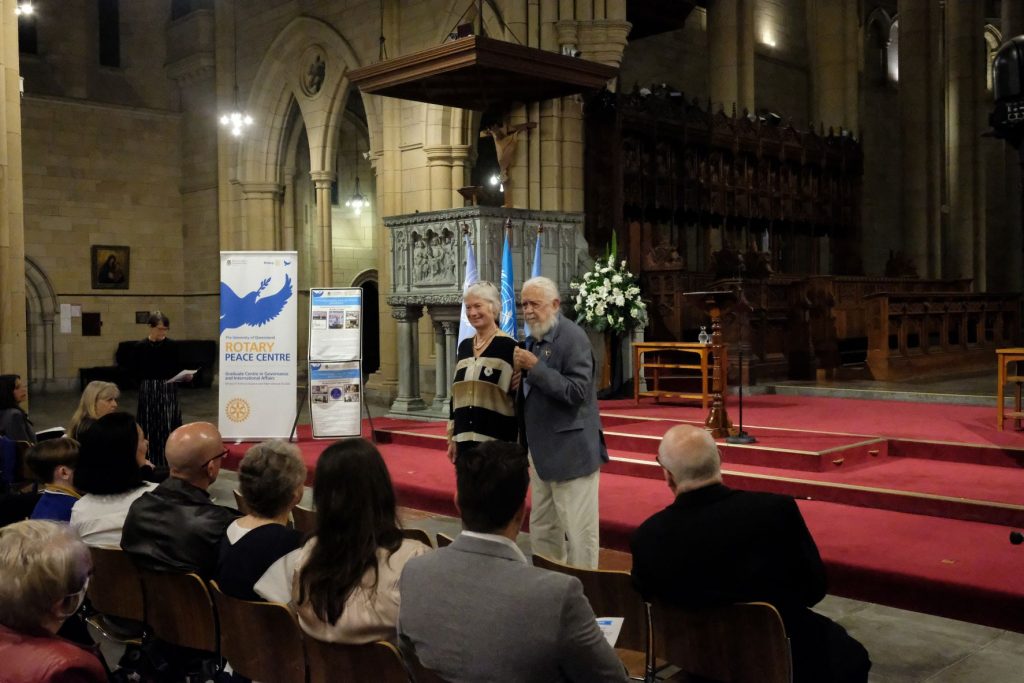 At the beginning of the 2022 Peace Day formalities, Ngugi Elder Uncle Bob Anderson OAM gave a heart-warming Acknowledgement of Country in both Language and English

Prior to Professor Davis’ lecture, the University of Queensland’s Rotary Peace Centre presented the two annual Celebrating Local Agents of Peace Awards, which were introduced by centre Director Roland Bleiker.

“This award was initiated six years ago…and goes to a Queensland-based person or organisation who has made a substantial contribution to peace and peace-building activities consistent with principles of non-violence, locally, nationally or globally,” Professor Bleiker said.

“Very often peace is best promoted by people on the ground through incremental processes. 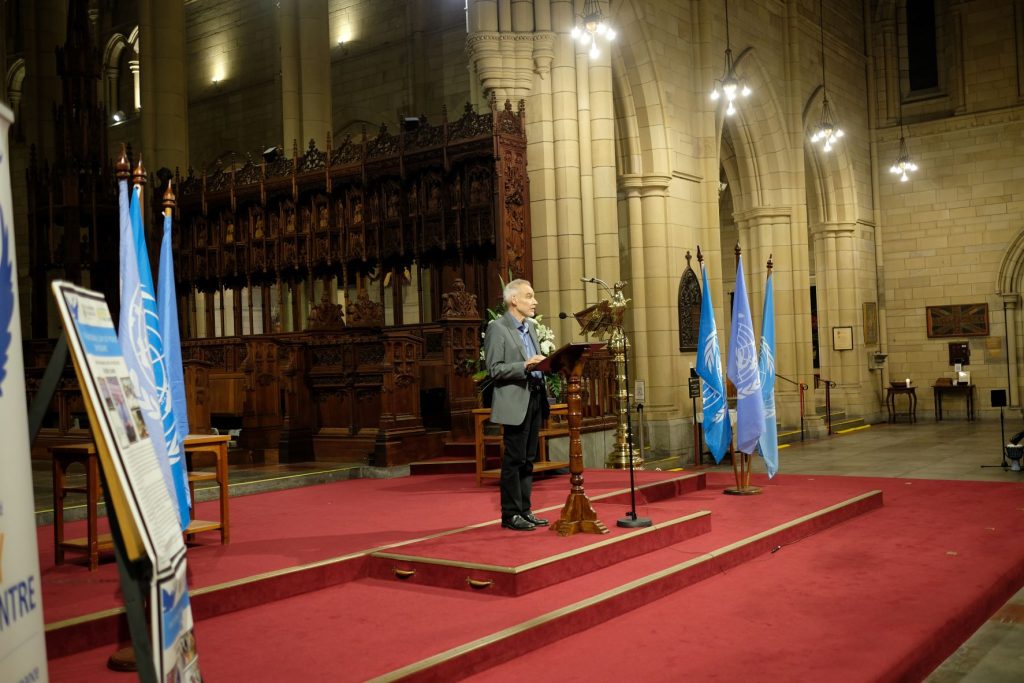 Mr Lewis said that it’s important to celebrate everyday “acts of kindness” so that peace is fostered at a grassroots level.

“I feel it’s intrinsically important to encourage peacebuilding efforts, including everyday acts of kindness, sharing, and compassion, be they modest and/or be they grand in scope,” Mr Lewis said.

“And wheresoever we can publicly acknowledge, encourage and support these endeavours, then so much the better, and hopefully it will inspire others, impart understanding and promote continuing positive change.” 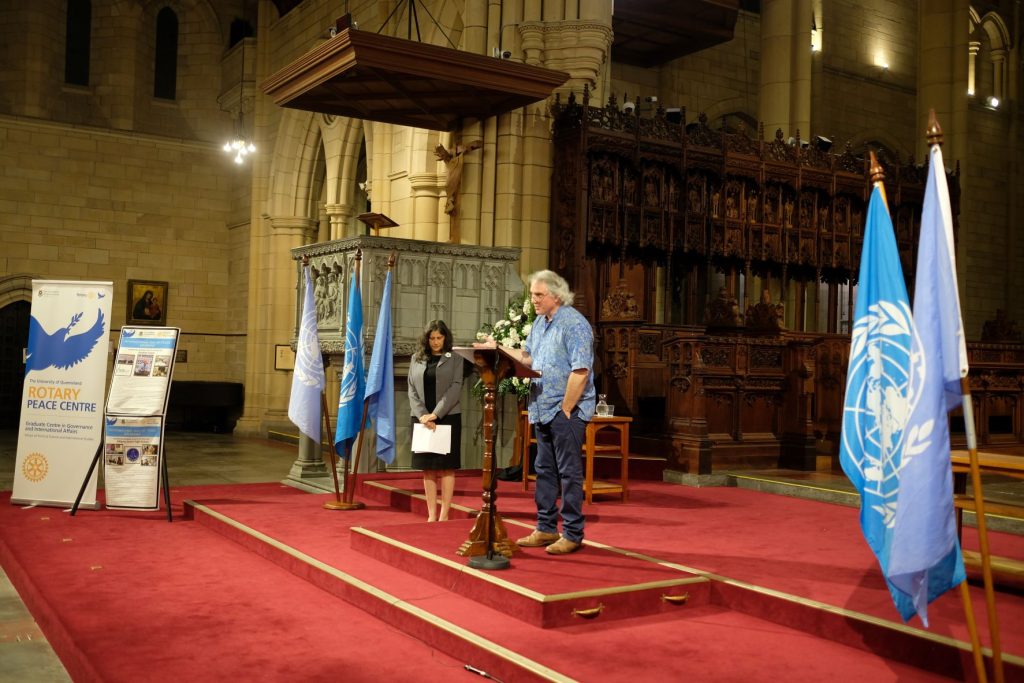 The theme for this year’s United Nations International Day of Peace is “End Racism. Build Peace”.

So it was especially fitting that Professor Hanson presented an organisational award to Milpera State High School, an intensive language school in Chelmer for people of refugee and migrant backgrounds.

“Many of these students will have experienced conflict or trauma in their lives, and the community at Milpera has undoubtedly played a huge part in welcoming them to Australia and ensuring their academic and social wellbeing,” Professor Hanson said. 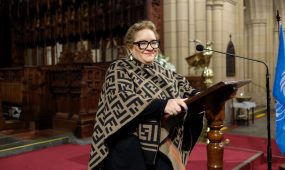 “I have seen the dedication and service provided by Milpera’s teachers and volunteers, and we are delighted to honour them here.

“Milpera translates to ’the meeting place of brothers and sisters’ – we are sure that the careful work and designed interactions that take place at Milpera are producing a generation of wonderful young people who can take their place proudly in multi-cultural Australia.”

The Milpera State School’s award was accepted by Mary-Ellen Nielsen from the Brisbane Taylor Bridge Rotary Club on behalf of the Milpera principal due to the event being held during the school holiday period.

Ms Nielsen said that the local Rotary Club has supported Milpera over many years, including donating food items to, and serving food for, the school’s breakfast program.

The student message, which was given by Year 5 student Atticus Morris from the Ferny Grove State School’s Peace Program, resonated strongly with our 2022 Diocesan theme, “Being Together: Embracing Joy”.

“I think peace is about understanding, accepting and celebrating difference,” Atticus said.

“It’s not seeing difference as a bad thing or something to fight or extinguish out.

“It means working together and caring for than just yourself.”

Inspired by Uluru Statement From the Heart and in line with our Diocesan Reconciliation Action Plan, Archbishop Phillip Aspinall made a formal submission on behalf of our Diocese in support of the Voice last year.

President of the United Nations Association of Australia Queensland branch Claire Moore said that the Voice to Parliament enshrined in the Constitution is significant for all Australians.

“The Voice to Parliament is one important step to real reconciliation and peace in our country…it is a commitment to hope after generations of injustice and ignorance.”

Professor Davis was introduced by Professor Bronwyn Fredericks, the University of Queensland’s Pro-Vice-Chancellor for Indigenous Engagement.

Seventeen members of the Brisbane Combined Unions Choir performed songs between the formalities. 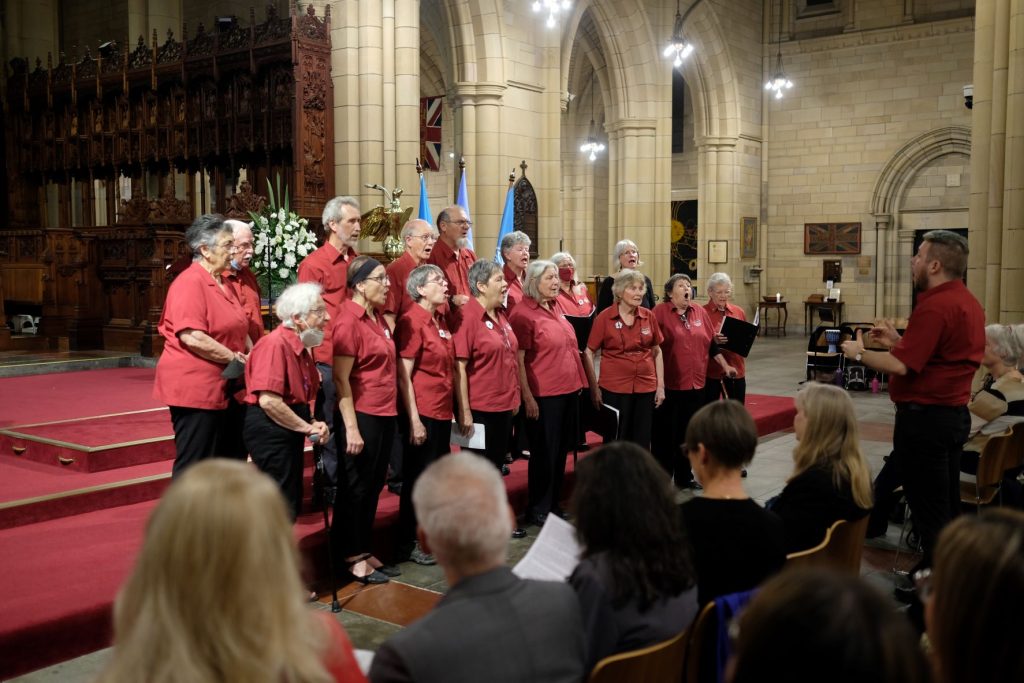 A collection was taken during the evening for the UNICEF flood appeal in Pakistan.

The evening was closed by Clem Campbell, from the United Nations Association of Australia Queensland branch and Earth Charter, who acknowledged all those present as “global citizens”. 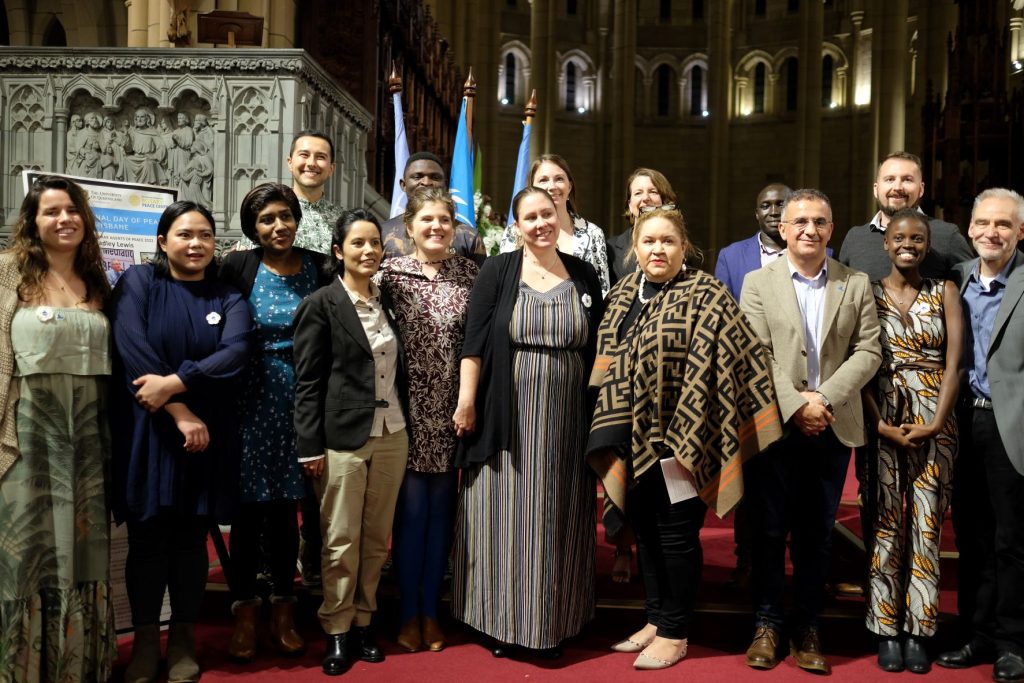 Professor Megan Davis’ Brisbane Peace lecture and the Cathedral’s other key International Day of Peace formalities may be viewed on YouTube.