Two of the mission statements of Anglican Mothers Union Australia (AMUA) are to promote conditions in society favourable to stable family life and the protection of children, and to help those whose family life has met with adversity. AMUA joins with other organisations and supports the International ‘16 days of Activism against Gender-Based Violence’, which is a United Nations campaign to raise awareness about violence against women and girls worldwide and its impact on their physical, psychological, social and spiritual well-being. The campaign aims to raise awareness about domestic violence and human rights, with the goal of preventing future violence. It also encourages men to take a personal stance against violence. The colour theme is orange and purple.

The UN Women National Committee of Australia writes that “One in three women and girls experience violence in their lifetime…It happens in every country and every society. It happens at home, in schools, on the streets, at work, on the internet and in refugee camps. It happens during war, and even in the absence of war. Too often, it is normalised and goes unpunished.” In the last year we have seen Hollywood actresses speak out against sexual harassment and sexual assault. The global #MeToo and other campaigns have exposed the magnitude of sexual harassment and other forms of sexual violence that women over the globe have suffered. Breaking the silence has led to awareness and is a step to transforming the culture of gender-based violence.

Our church community at St Paul’s, Ipswich has been participating in this campaign over a few years and has strong support from all our parishioners. The campaign ran from 25 November (The International Day for the Elimination of Violence against Women, for which the ‘white ribbon’ is the international symbol) to 10 December (Human Rights Day).

A banner advertising White Ribbon Day, with an accompanying orange woman and two white ribbon ‘cutouts’ were hung outside the church for all the passersby who traversed the main street of Ipswich to see. Working in conjunction with the local Zonta Club, a second orange lady was placed at the entrance of the church, supplying information about local domestic violence services. The colour orange is a key theme used to unify all activists and to help bring global attention to the plight of gender-based violence against women and girls.

Inside St Paul’s, members of Mothers Union and friends made a display of examples of gender-based violence found in Australia and communities around the world. We invited our members, parishioners and visitors to read the information. White circles highlighting examples of violence against women such as domestic violence, stalking and harassment, cyber violations, forced marriages, rape, female infanticide, honour killings, female genital mutilation, trafficking in women and forced prostitution dotted our white Prayer Tree. Over the two weeks, as people felt led, we invited them to write a prayer for the victims on an orange or purple cardboard leaf and tie it to the tree with a white or orange ribbon.

On our last Sunday, during communion prayers, we prayed that our written prayers would join with other prayers offered around the world to end all forms of violence and abuse. We prayed for all who work with the victims of domestic violence and made a special mention of those connected to Women’s Homelessness Services. At the end of our service, a free will offering was taken to support Anglicare Southern Queensland Homelessness Support Service for Women and Children. 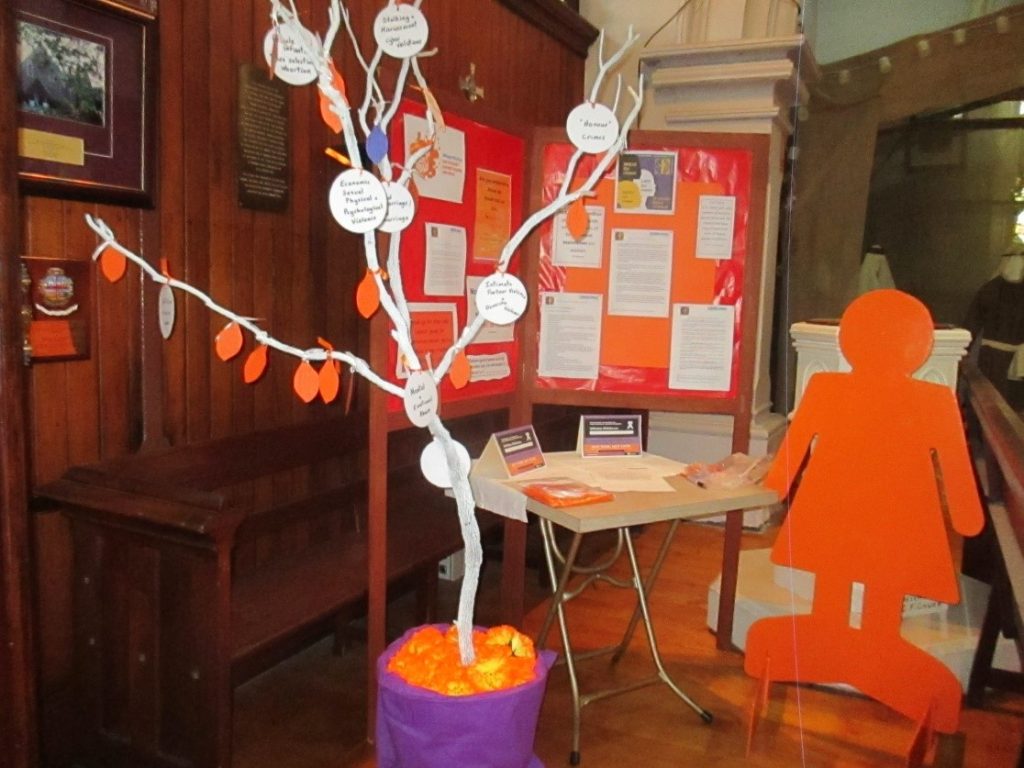 Display inside the entry of St Paul’s, Ipswich