Last year was the 100th Anniversary of the passing of Canon Thomas Jones – Canon Jones was a noted figure in the Diocese, and is remembered through the Memorial Chapel at Anglican Church Grammar School, and the annual Memorial Sermon (held last year at the Church of the Risen Christ at Deception Bay). There were many other individuals in the Diocese who were as equally revered at the time – but sadly are not as well remembered. Looking through the Church Chronicle for February 1920, I noticed an article on The Rev’d John Spooner. The content of the article was taken from the Brisbane Courier. The Chronicle’s editor noted that the Courier’s “account of him is so full that we venture to borrow it. Mr Spooner was 80 years of age, and died on Sunday, January 11th.” The full article is reprinted below.

“Born at Colchester, Essex, in 1839, the late Mr Spooner came to Sydney at an early age in company with an elder brother to seek his fortune in the exciting days of the big gold discoveries, and after meeting with some success, he returned to the Old Country. He again came out to Australia, after a year’s absence, and decided to study for the Ministry. He was ordained in Sydney in 1874. His first parish was at Bowen (Queensland), where his unselfish labours are still remembered by the survivors of those strenuous pioneering days. After a period of eight years Mr Spooner returned to New South Wales, and was in charge of various parishes until 1889, when he came to Brisbane to take charge of the Parish of Trinity, Fortitude Valley. He was a familiar figure in the life of Fortitude Valley for twenty years, during which time he faithfully ministered to the spiritual needs of the parishioners of Trinity Church, and by his practical sympathy, generosity, and strong religious faith, he commended the Gospel of his Master to all who came under the influence of his life. He will be especially remembered by those who needed encouragement and assistance during that depressing period following the big flood of 1893, when many members of his congregation suffered much distress.

The handsome brick Sunday School and Rectory, which form an important part of Trinity Parish buildings, were erected during the late Mr Spooner’s term there, and constitute a fitting memorial to his faith, energy, and zeal. About 10 years ago the veteran clergyman was compelled by advancing age to relinquish the charge, but he continued to render assistance to the Church in an unattached capacity until the last few years. He is survived by his widow, five sons, and two daughters. One son predeceased him by several years.

He was buried in Toowong Cemetery, the Revs. W. H.W. Stevenson and Canon Osborn conducting the services. A short service was held in Trinity Church, in which the Bishop and several of the Clergy took part.”

The Archives collection has several photographs of The Rev’d Spooner, including some taken upon his retirement. He was obviously a much respected figure (if the photographs are anything to go by) and he greatly contributed to the life of the Fortitude Valley Parish and its parishioners.

Group of tennis players, with The Rev’d Spooner seated in the middle, on the court behind the Rectory (ca 1909) 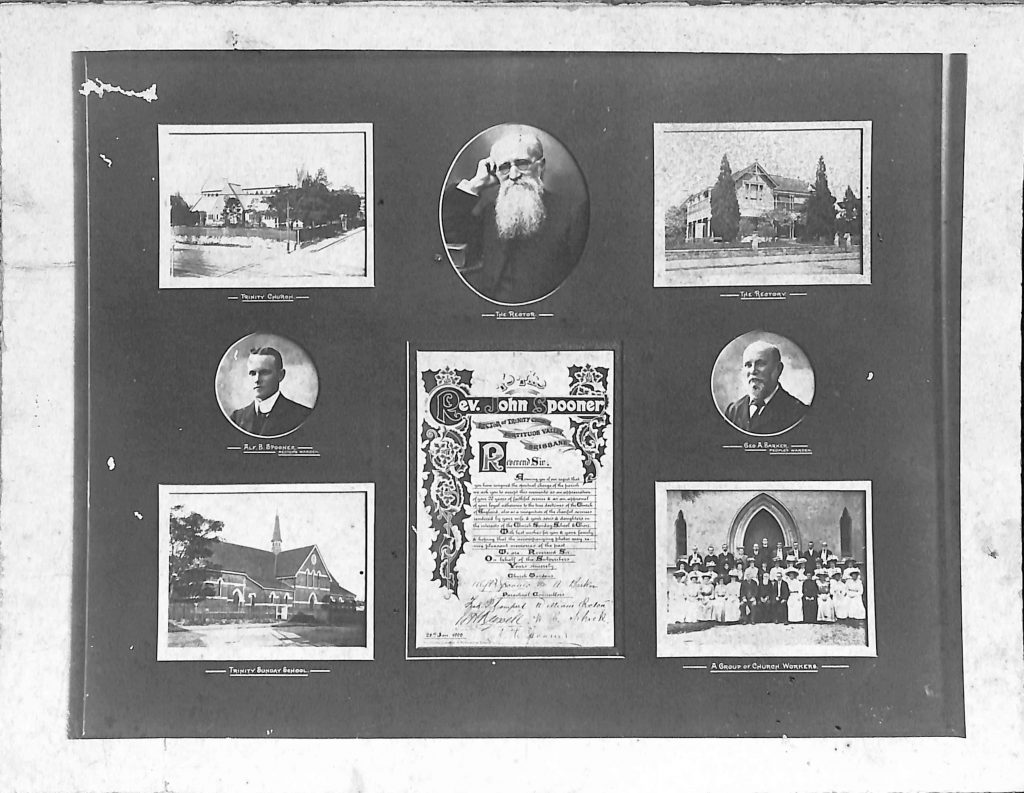