A sketch of poet and World War II prisoner of war, James Picot

I cried out; where the silver rivers sprang

The mountains heard my voice, and rang it back,

As the earth rocked a little from the sun,

That saffron-painted strangely the black trees.

(Excerpt from ‘The Prophet’, by James Picot)

In mid-1937 a student at St Francis Theological College and sub-editor of the College’s The Franciscan Review published these words. They are a part of a larger poem called ‘The Prophet’, one of two of the student’s poems published in this issue. The other is called ‘The Bush Fire’.

The author, Anglican James Picot, came to our attention when Judith Matthews, one of our volunteers, discovered some correspondence between this man and Archbishop William Wand. What captured our attention was that the final reply the Archbishop sent never arrived at its destination in Malaya, as the ‘Delivery Impracticable Return To Sender’ stamped envelope had ‘P.O.W’ written on it, and was dated 1942. Upon further investigation, we discovered a man who was highly influential in the Australian literary world in the 1920s and beyond. He was published in The Bulletin, associated with the Catholic Poetry Society and the Queensland Authors and Artists Association, and was one of the four founders of literary magazine Meanjin in 1940.

Born in Hertfordshire England, Picot came to Australia in the early 1920s and began a series of outback jobs. But, it was the written word, particularly poetry, which was his passion. After winning many literary prizes, he made his way to the University of Queensland, where he graduated with honours. He then decided to train for the priesthood in 1937 and joined the students at St Francis Theological College. Sadly, the priesthood was not for the bohemian poet, and so he left the same year. But, not before striking up a friendship, it seems, with one of the lecturers at the College, Archbishop William Wand.

After helping to establish Meanjin and promoting the literary culture of Queensland and Australia, Picot went on to enlist in the Australian Army in May 1941 and was posted to the Signal Corps of the 8th Australian Division. He was captured by the Japanese in Singapore in February, 1942. Picot became a prisoner of the notorious Changi POW Camp, and was forced to work on the Burma Railway. He died of beriberi, caused by malnutrition, on 11 April 1944.

The simple find of an envelope with ‘P.O.W’ written upon it, allows us to remember a man of letters and of creative promise, who was deeply spiritual, a friend to an Archbishop, and who was cut down in his prime. It has also unearthed two poems in our collection that may have never seen the light of day. Picot’s poems will be shared with various university and literary organisations who have an interest in James Picot.

“…wild rumours circulated when everyone on evening leave was fetched home suddenly last night. The Brigadier Major told us this morning in a short concise speech that there were no hostilities yet, only precautionary measures. I have been too busy to worry very much…”

‘The Bush Fire’, by James Picot

Too fretful now, for words or flowers.

And lick the growths away. He dowers

The scrub with ashes, for His seed

To spring with rain; I brood:

Herb out of flame, shall thrive at need,

Unchoked, a harvest for the ashen mood. 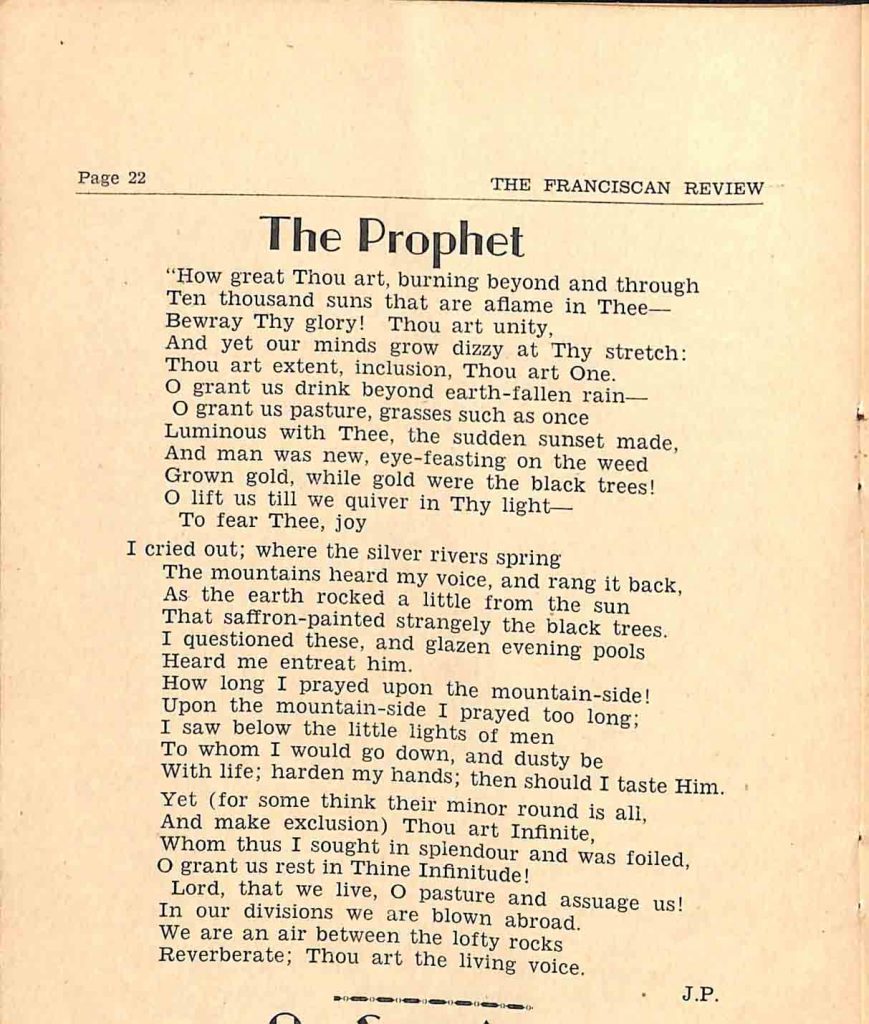 James Picot’s poem ‘The Prophet’, published in The Franciscan Review in June 1937