In August 2017, I was a high school Strings Director and my husband Bishop John was Dean of the Anglican Cathedral in Bendigo. It was a Wednesday, the day before 24 Australian Deans and a number of spouses were arriving for the annual five-day Deans’ Conference. There is never a good time to receive a cancer diagnosis, but shocking news received less than 24 hours before a busy weekend of activities is difficult to deal with.

In my strongest memory from that weekend, I am standing in the kitchen of our house, where we were hosting a dinner for countless people – Deans, spouses as well as parish people organising the food. I was standing there thinking – No one knows I have breast cancer. My life is about to be turned upside down and no one knows. Sometimes you have to just keep going, you keep smiling, and you deal with the impending chaos a few days later when everyone has gone home. Fast forward to 2019, I am now heading for the second anniversary of being cancer-free, I have reached the milestone of 100 parkruns, and I am reflecting on where I have been and where I am heading. 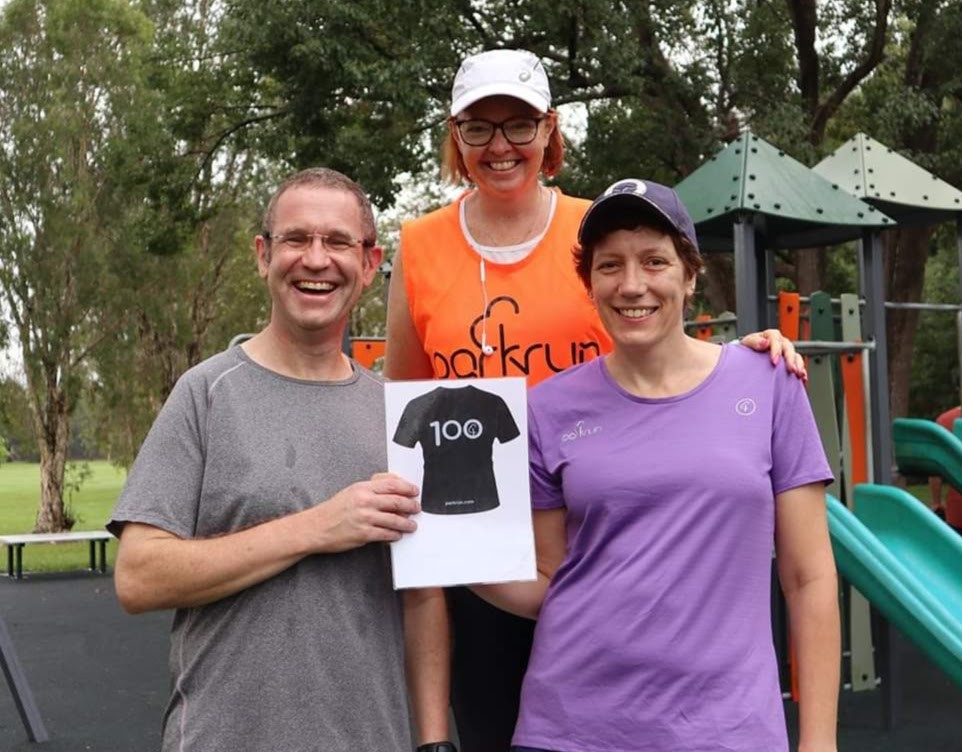 A double mastectomy quickly followed the diagnosis, then months of chemo. Recovery from mastectomy was physically not too bad, but emotionally it was tough. Chemo treatment was grim, affecting your whole life and those around you. The awful side effects are like a combination of extreme morning sickness, a heavy hangover, too many late nights and flu. Neuropathy (numbness of fingers and toes) commonly occurs, which is really not good for a strings player who values their fingertips. During treatments each hand was encased in several tight surgical gloves topped by a bag of ice to reduce neuropathy.

But I remember holding onto the fact that it could have been worse. We could have been living somewhere without supportive friends and a great church community. Our youngest was now at university. Diagnosis could have happened during her Year 12, which would have caused greater impact. Instead I had a steady stream of young people and their friends coming to visit, distracting me with games of Settlers of Catan.

One Bendigo friend regularly made me green sludgy smoothies to boost my immune system; a Muslim friend came with me to appointments; and another Muslim friend decorated my bald head with henna after my hair fell out. My school students requested I wear my purple wig for concerts, and not my sensible brown one. I got some kickass cancer T-shirts for those days when I felt like shouting at the world. 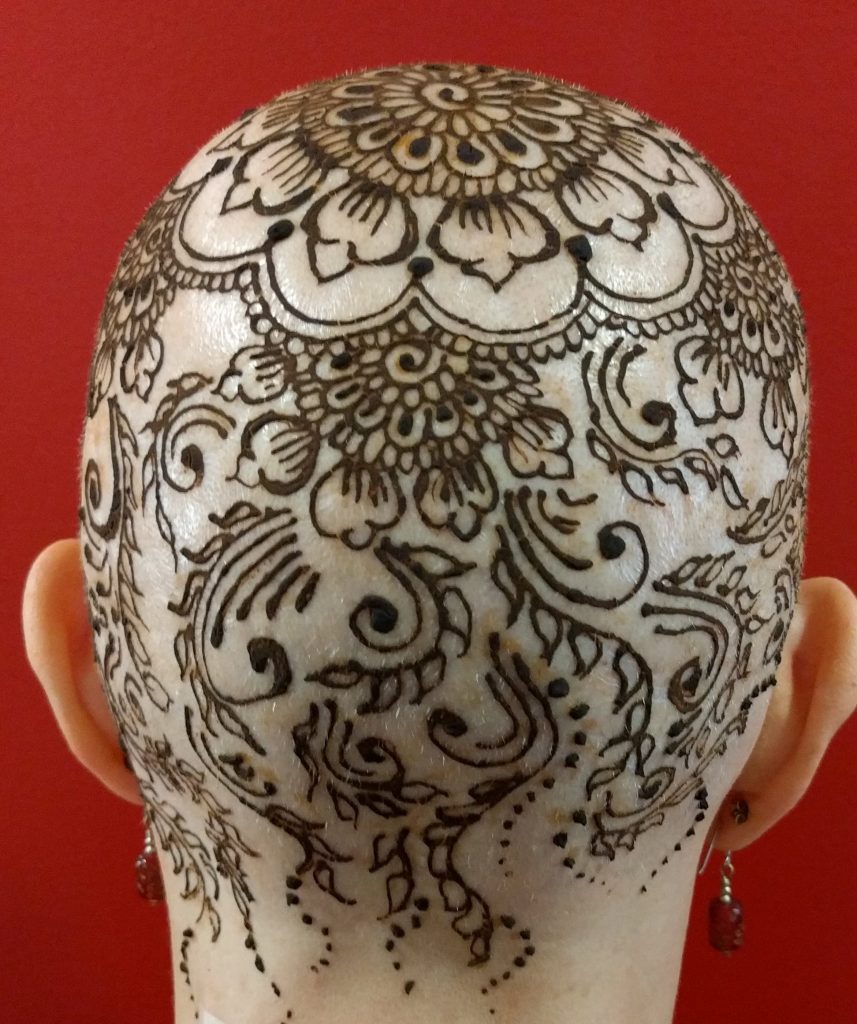 “If you’re bald due to chemo, get your Muslim friend to do a henna design on your bald head”

I shared my story on Facebook, along with humour to help distract me from my misery. Knitted knockers (prosthetics) arrived in the post. Then swimming knitted knockers arrived – did they self-propel I wondered? Regular eBay parcels arrived –- mad headwear ordered by friends and family to try and make me smile. And our dogs provided great comfort – they somehow knew I was unwell.

But there were still a lot of tears, feelings of Why me?; anger and frustration. I had been in charge of a school overseas music tour, and after two years of planning my Strings students had to go without me whilst I had chemo. I felt betrayed and cheated. As a Christian I am supposed to say that my faith upheld me and kept me strong. But the reality was that faith did not stop the tears and the anger. I know some Christians believe everything happens for a reason. It is good that no-one actually said that to my face, as I probably would have felt like punching them. I do not believe in a God that gives people cancer in order to test their faith.

Week by week, John and I received support from the people of St Paul’s Cathedral in Bendigo. Meals, visits, gifts, flowers, messages of support, prayers. Crucially there was huge support not just for me, but for John as well. The Cathedral didn’t make demands on his time, giving him time to care for me.

Cancer changes your priorities and makes you realise what is important, and what is now simply irrelevant. I am not usually known for being a potty-mouth, but I amused myself working out which swear words fit the tune of ‘Frere Jacques’ (which my beginner Strings students played a great deal). I asked Facebook friends to write me their own versions. This was one of my favourites, written by Bishop Cam:

Holding you so closely, and the ones beside you, love is near, do not fear.”

If I felt well enough, I went to Saturday parkrun. Chemo gives you a brain fog and you feel lethargic; I was also bald and felt self-conscious. But walking in the park generally made me feel a bit better and it helped distract me from the misery of chemo. John and I were regulars at Bendigo parkrun before cancer, and the team members were always supportive and encouraging whilst I was unwell. Whether I was walking or doing a slow jog or volunteering as the tailwalker, I was always cheered on to the finish line.

Whilst all this was happening to me, discussions were underway, and John and I travelled to Brisbane for a weekend of meetings with Diocesan people. God’s mad idea was that I could deal with cancer and move interstate all at the same time. Looking back, I am not sure how I got through that weekend of Bishop discussions in between chemo treatments. But you do; you keep going.

John was appointed Assistant Bishop, and we moved to Brisbane. My mastectomy wounds healed, I recovered from chemo and my hair grew back. 2018 was dominated by reconstruction and surgery for me. Four general anaesthetics in six months is a lot to deal with, but John and I were very grateful for the love, support and prayers from new friends, old friends and the wider community of St John’s Cathedral and the Diocese.

We found a new parkrun in Mansfield, in the south of Brisbane. After major surgery you are not allowed to walk far, so I did a lot of volunteering on Saturday mornings. You can scan barcodes, be the timekeeper or hand out place tokens as people finish. This helped me get to know the area and make new friends. It took me three years to reach the milestone of 100 parkruns, and during my various 2018 surgeries it was the Mansfield volunteers who knew I was not well. Week by week I was cheered on and I got to the finish line and it was a great feeling.

I have now recovered from all the surgeries, the cancer is gone and I am doing well, both mentally and physically. Faith does help you make sense of your reality. It is irrelevant whether I walk, run or shuffle around a parkrun course on a Saturday morning, but it is good to get off the sofa and get out into the park. I joined the Brisbane Symphony Orchestra as well as the Cathedral Singers, who sing Evensong at St John’s Cathedral. Glorious music and the challenge of learning your part helped in my recovery and gave me a great sense of well-being.

My doctor said there is a reason why my body grew several cancerous tumours, they just do not yet know what that reason is; maybe cancer research will one day solve that. Life is so often like Forrest Gump’s box of chocolates; you never know what you are going to get. When I married John he was a curate in the North-west of England, and we had no idea that Hong Kong, Australia and life as a Bishop were on the cards for us.

During the darkest of days during chemo there were always people looking after our family; church folk bringing dinner round, people contacting us from church communities we were a part of years ago; the arrival of gifts, cards, flowers, emails, Facebook messages, gift vouchers to enjoy when I was recovered. The wider church community makes connections across the world, via 21st century technology, and through messages, love, support and prayers I found there was always something to be thankful for.