In October 1918, with the First World War coming to an end, a 57-year-old priest died in Sydney. He had always struggled with his health. His struggles with chronic asthma were known well in the St John’s Cathedral, Brisbane, where he had served as Assistant Curate, Vicar, and Sub-Dean from 1889 to 1898. In his next calling, as the first Bishop of New Guinea, malaria further weakened his constitution. He was mourned by his wife of eleven years Elfie, and their two daughters, and an ‘in memorium’ appeared in the Church Chronicle acknowledging the debt our Diocese owed to this passionate cleric – a cleric who, within the space of eight years, introduced key initiatives within our Diocese that we benefit from to this day. It is time to acknowledge him and his contributions again. His name was Montagu John Stone-Wigg and here are three ways he changed the Anglican Church in Brisbane.

The Rev’d Montagu John Stone-Wigg in 1894

Perhaps the first and most relevant innovation of Bishop Stone-Wigg can be found in the ancestor of the publication you are reading right now. In 1886 a small newsletter called St. John’s Parish Magazine had begun. As the name implies, it was not a Diocesan periodical but one devoted to the congregation of St. John’s in the heart of the city. In 1890 the editor of that parish newsletter, The Rev’d Bernard Wilson, was leaving to go back to England. He asked The Rev’d Stone-Wigg to take over. The latter decided that a new publication should begin, called The Church Chronicle, and it would be designed to be the vehicle for all Diocesan news, not just the parish of St. John’s. The first issue was published on January 1 1891, and continued, under the same name and a very similar format, until 1971, when The Church Chronicle changed its name to the ‘Diocesan Newsletter’. In the January 1911 issue of The Church Chronicle, an article was written to celebrate twenty years in existence. Stone-Wigg’s picture duly appears with the caption, ‘The Father of The Church Chronicle’. While our Diocesan publication has gone through several manifestations, anglican focus can trace its lineage directly back to this priest who had only arrived from England three years previously. 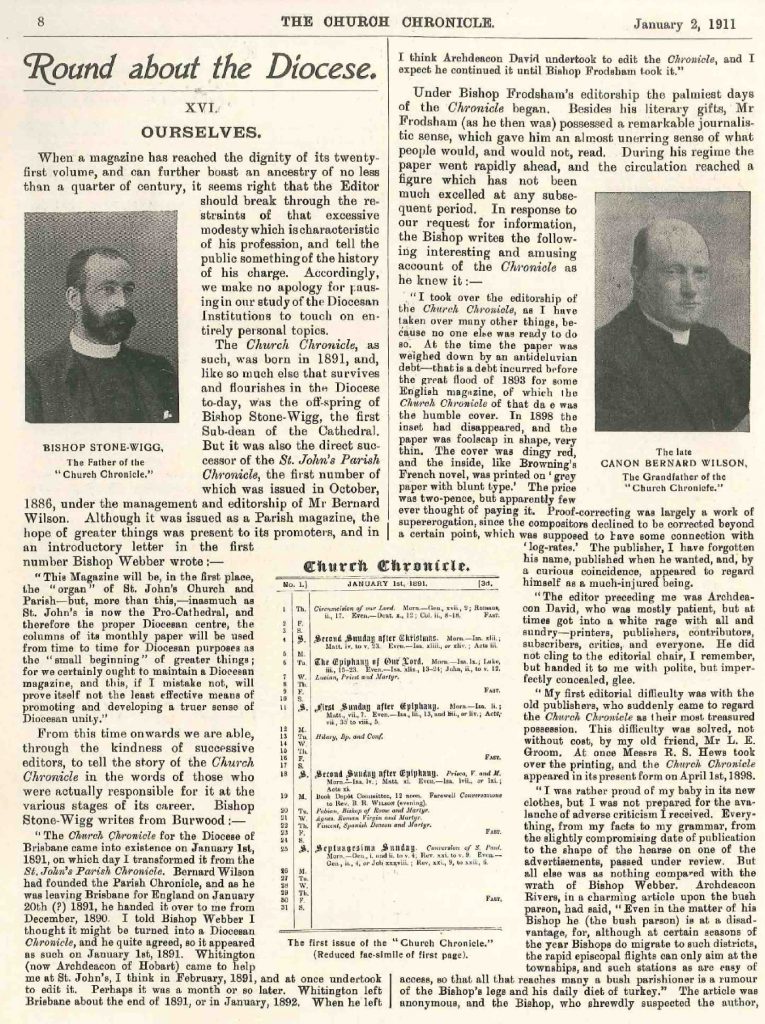 Montagu John Stone-Wigg was educated at Winchester and Oxford, studied to become a priest at Ely Theological College in Cambridgeshire, and was born into an eminent family in Tonbridge Wells, Kent. It is a credit to him that he, nonetheless, was known to possess the ‘common touch’, and was acknowledged upon his death as, “…a pastor in the highest and best sense of the word” (‘In Memorium’, The Church Chronicle, November 1918). His background, perhaps particularly his time at Oxford and his friendship with Bishop William Webber, moved him to be very Anglo-Catholic in his leanings. In 1891, to address a need for nursing and educational services in our Diocese and the British Empire as a whole, Stone-Wigg suggested a need for a Sisterhood to be established in Brisbane. This call was well received, and a letter backing this idea was published in The Church Chronicle in the August issue. Interestingly this concept made its way to the General Synod of 1891 in Sydney, and the notion of ‘Deaconesses’ and the introduction of Sisterhoods to the whole of Australia could be said to have been borne from this initial movement. 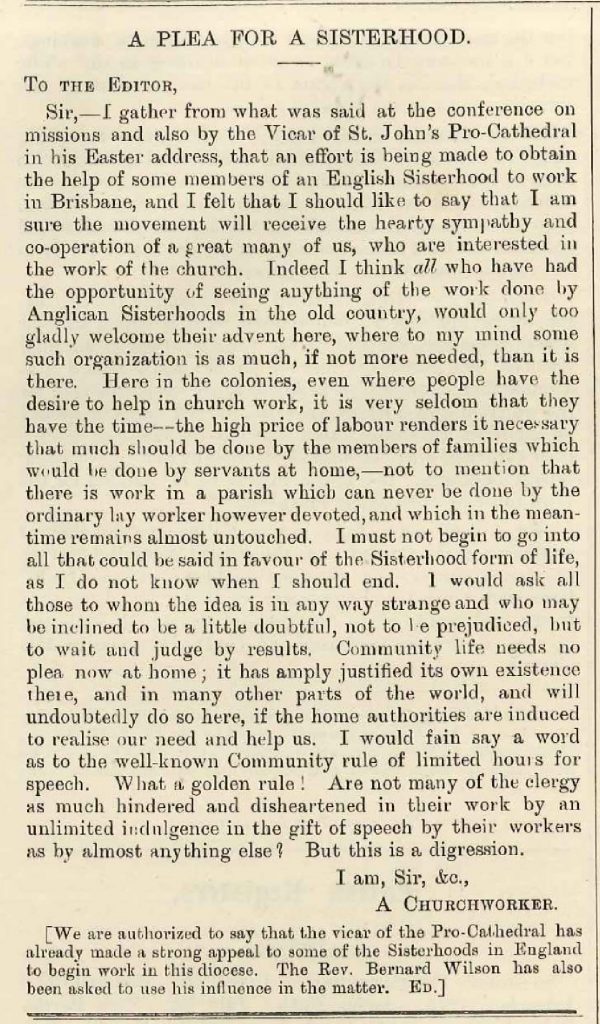 Letter in The Church Chronicle agreeing with Stone-Wigg’s idea for a Sisterhood in Brisbane, August 1891

The same man who had handed The Chronicle over to Stone-Wigg, The Rev’d Bernard Wilson, was now in England. He would act as a conduit between Stone-Wigg and a London-based sister who felt a call to foreign mission work – Sister Caroline Amy Balguy. She was a part of the Community of St John the Baptist, otherwise known as the House of Mercy, Clewer. In 1892 negotiations began to take place between The Rev’d Wilson, on Stone-Wigg’s behalf, and Sister Caroline. This was in April, and by December 1892 Sister Caroline and a Deaconess, Sister Minnie, arrived in Brisbane and began the Society of the Sacred Advent (SSA). This community’s contributions to the Diocese cannot be understated, including their help with refuges for women and children’s homes and their educational building, with St Margaret’s and St Aidan’s still under their auspices to this day. With these schools alone, The Rev’d Stone-Wigg’s legacy can still very much be felt. 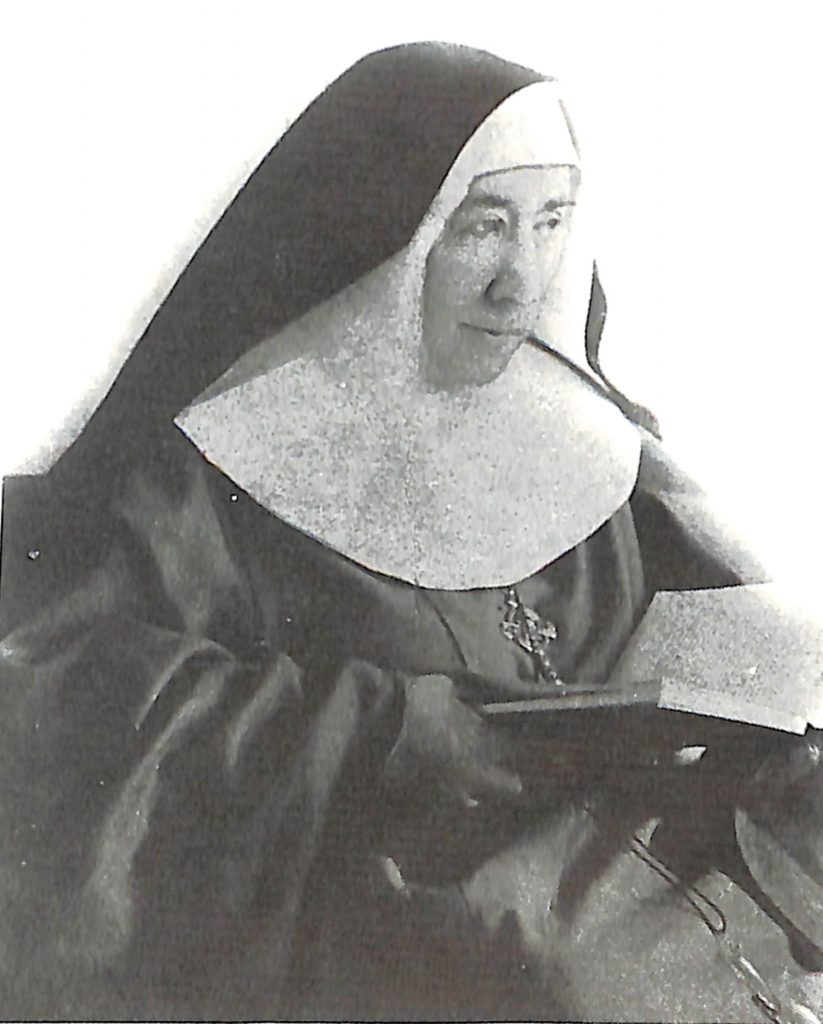 Sister Caroline, founder of the Society of the Sacred Advent, circa. 1895

Six years after the establishment of the SSA in Brisbane, the now Canon Stone-Wigg was asked to become the first Bishop of New Guinea. He devoted himself to his new role, even donating a personal inheritance he had received of £10,000 to the new Diocese. His former Diocese of Brisbane was never far from his mind, however, and this leads to the final contribution to be acknowledged, something that, while not fundamentally as profound as the previous contributions, is something we see whenever we enter St John’s Cathedral. In 1899 Bishop Stone-Wigg donated a large brass eagle lectern to the Cathedral as a memorial to his parents. It was given to the Pro-Cathedral, technically, when it was still at William Street, and was one of a very few items transferred over to the Ann Street site after the first stage was completed in 1910. The lectern is said to have been designed by Frank. L. Pearson, the architect who designed the Cathedral, and was made in England. It stands there still, as a memorial to Stone-Wigg, his parents, and the relationship the Bishop had with our Diocese. 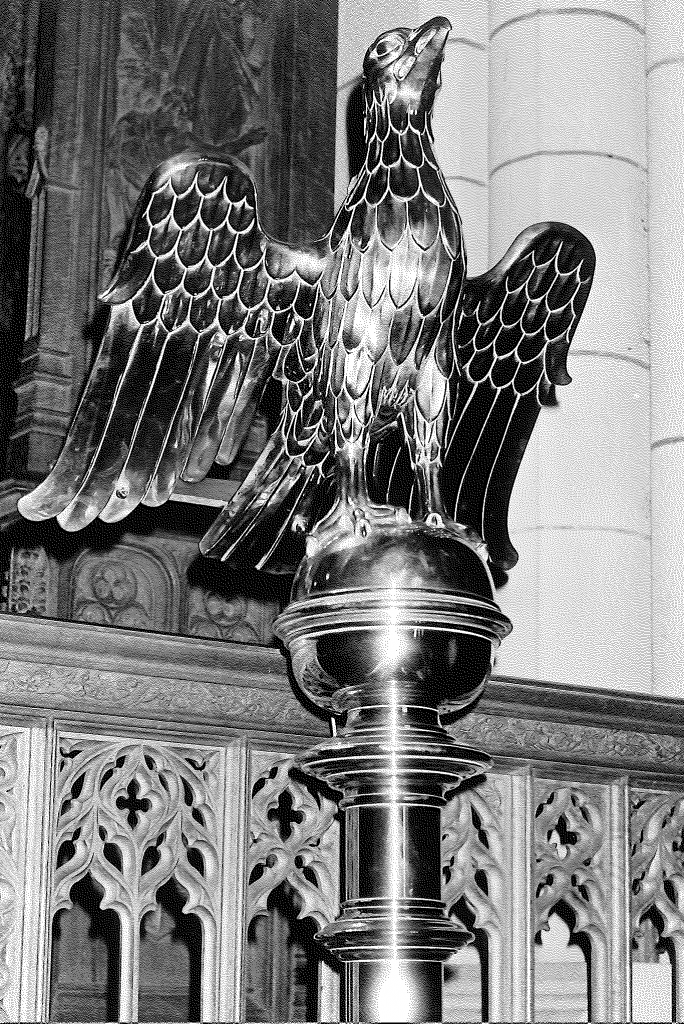 The famous brass Eagle Lectern Stone-Wigg donated to St John’s Cathedral, circa 1990s (the eagle is the official symbol of St John the Evangelist)

While more could be said of how this innovative and industrious cleric contributed to our Diocese, including his instituting the St John’s Cathedral Day School (now Webber House) in 1894, and the founding of the Anglican Church Mission in 1895, the three deeds above show just how significant an impact one priest had on our Diocese in less than a decade. On 16 October it will have been 101 years since his death. It is a fitting time to acknowledge a man with a poor bodily constitution, but a mighty and priestly spirit.