Acting Executive Director of Anglicare Australia Roland Manderson said that the job market is failing those who most need help to find employment, especially older Australians.

“The job market isn’t working for everyone. It’s failing people who need the most help to find work – our research shows that at least five disadvantaged job seekers are competing for each job at their level,” Mr Manderson said.

“Older people face even tougher odds. The job market is changing fast and age discrimination makes it harder to compete.”

“The stereotype is that Newstart is for younger people, but that’s a myth. Around half of all people on Newstart are mature age job seekers – and the number of older Australians on Newstart is growing by 10,000 a year.

“Instead of preparing to retire, many people are now selling their homes and spending their savings – nobody should be forced to retire into poverty.”

Mr Manderson called for reform of the employment services system.

“It’s time to overhaul the Jobactive network – it’s taking an average of five years to find work for those who need the most help. And that’s bad news for older people. Once a person over 50 has been unemployed for over a year, they’re unlikely to ever find a job,” he said.

“We need to offer tailored support to older people looking for work. That means smaller caseloads for Jobactive staff, more time to work with job seekers, and less time wasted on compliance. 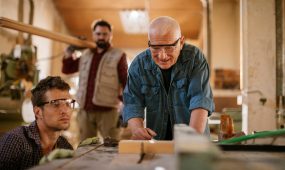 “We particularly need to abandon the cruel, pointless changes of recent years. People over 55 used to be allowed to meet their mutual obligation requirements with volunteering. That makes a lot of sense for many, given their strengths and circumstances. The recent decision to take that option away from people is counter-productive and must be reversed.

“And if we want to stop people from retiring into poverty, then we must raise Newstart and stop lifting the pension age.

“These changes are all urgent. If we don’t fix this broken system, we will be forcing people to spend their older years in poverty, starting with the unreasonable expectation that they find a job which isn’t there.”