From Bush Brothers to Mission Area in 130 Years is a historical account of All Saints’ Anglican Church in Mitchell, lovingly written by Mitchell stalwart Christine McLean in the lead up to the church’s 130th birthday. Mrs McLean began the research for the book in 2017 to mark the laying of the church’s foundation stone, as well as to document the Anglican Church’s contribution and ongoing legacy to the area.

Mrs McLean told anglican focus that, “We were losing many of our elderly parishioners, so I thought it would be good to write its history. I had my mother-in-law’s scrap books and, also, her mother’s and grandmother’s bits and pieces…Writing the book was a busy escape from the continuing drought and brought me into contact with so many people from near and far. It took nearly two years, on and off, to write.”

The comprehensive 184-page book begins with forewords written by Western Region Bishop, The Right Rev’d Cam Venables, and then Deacon (now Assistant Priest) of the Maranoa Warrego Anglican Mission Area, The Rev’d Rick Gummow. These forewords are a delight to read, showing the special relationships that regional and rural clergy share with their congregations and their intimate understanding of the unique trials and blessings Western Region folk experience.

Also included is a list of all of the clergy who have served in the parish, from 1889 to present day. Throughout the book are insightful biographies of these priests, including those from the ‘Bush Brotherhood’, which comprised a number of Anglican religious orders who commissioned itinerant priests to serve in sparsely-populated rural areas of Australia from the late 1800s to the 1960s. Mrs McLean writes, “The romantic aura that became associated with the brotherhood in England was well captured in the recruiting speech made by George Frodsham, Bishop of North Queensland, in Oxford in 1908: ‘Oh for a band of men that will preach like Apostles [and] ride like cowboys…will therewith be content!’ ” (p. 13).

The many highlights of Mrs McLean’s book include stories of unlikely heroes, such as Bush Brotherhood leader Bishop George Halford who, despite disliking the outback and possessing deep-seated city manners and sensibilities, won locals over with his “courageous, cheerful and unquenchable spirit” (p. 12).

Other highlights include anecdotes of amusing mishaps that can only transpire in the bush, including a story told by The Rev’d Tedd Dunglison, who served in the Maranoa Region in the 1960s and 1970s. He recounts how, after rolling his Volkswagen on the Injune/Roma Rd, a parishioner came across him and offered him some rum as there was little else that could be done: “We sat down with a drink and enjoyed the moment” (p. 58).

Such mishaps show the resourcefulness and resilience of the Bush Brothers and the priests who continue to serve today, including that of English-born Brother William Barrett who ministered in the region in the early 1900s:

“By January 1909, Brother Barrett had been in Queensland for two years and had five others with him in the Brotherhood. Travelling to St George one day, he found the Maranoa [River] swollen after rain. The house was half a mile on the other side, so he undressed, found the water safe enough to swim and crossed with his clothes in a bundle on the saddle of his horse. His clothes were not very wet, so he put them on and rode up to the house, only to find it was the wrong house – he had missed a turning and was 17 miles from his destination! He had no choice but to repeat his swim in reverse, finally arriving at the correct homestead” (p. 22).

With the Bush Brotherhood’s decline in the 1960s, and the effects of prolonged drought leaving the Mitchell, Charleville and Cunnamulla Parishes vacant, in 2011 parish priest Fr Peter Moore worked with parishioners, under the direction of then Bishop Rob Nolan, to create a structure enabling one priest to minister across the region. The Maranoa Warrego Anglican District (MWAD) was thus formed, with Fr Peter, supported by the Bush Ministry Fund (BMF), covering a 90,000 square kilometre area in the Maranoa Warrego district, assisted by many dedicated Liturgical Assistants. McLean writes that Fr Peter managed his “massive routine cheerfully and tirelessly – his work compounded by the worst flooding in some areas of the district, then bushfires and drought” (p. 167). Following Fr Peter’s ‘retirement’ (Fr Peter is now Chair of Angligreen and seems as industrious as ever), MWAD was reviewed and the Maranoa Warrego Anglican Mission Area (MWAMA) was created. Such stories are one of this book’s great gifts, as they show the ongoing adaptability and resourcefulness of rural and remote Anglicans who are determined to practise their faith and support their local brothers and sisters in theirs.

Another section of note is the history of the Bush Ministry Fund, which was launched in Synod in 1998 and is championed by the indefatigable Bishop Cam Venables today. Mrs McLean describes the BMF as, “a life saver for rural parishes where extremes of natural events and a declining population have caused a problem where parishes have been unable to afford the stipend of resident ministers for many years” (p. 127). Reading about the history of the BMF from the point of view of a number of local Anglicans, including Fr Tom and Wendy Hall who came out of retirement in 2010 to assist with BMF promotions for four years, gives insight into how the broader Diocesan community has historically supported this vital initiative. Mrs McLean describes how the BMF, “helps pay the clergy stipend, provides vehicles and supplements running costs as they travel long distances on dirt and bitumen, showing Jesus’ love and sharing and word in remote communities” (p.127). While similar funds are promoted by other Anglican Dioceses, the BMF is unique in that funds go solely to support rural and remote ministry in our Diocese, with at least 98 percent of money donated directly funding bush ministry. Mrs McLean’s tribute to this wonderful ministry, and the people who serve and support it, is both fitting and necessary.

Mrs McLean’s book also recounts key fundraising endeavors, which she describes as being historically “an essential part of the church life” with “methods as varied as the weather” (p. 84). From fundraisers for the Red Cross and prisoners of war in the 1940s to bazaars, balls, sport days, shows, luncheons, picnics and livestock schemes in later years, this section of the book gives you a keen insight into the way in which church and the broader community are seamlessly interwoven in regional and rural areas.

Likewise do the many stories describing how Mitchell locals work together in a crisis, as happened on the day of Fr Peter Moore’s Commissioning as Priest-in-Charge of MWAD when the district was unexpectedly flooded:

“Fr Peter’s mother came from Townsville for the Commissioning and was stranded in Mitchell when the rains came. Mitchell was completely isolated with the road bridge damaged and roads in all directions cut by flooding. The only access for some time was by helicopter or to walk across the railway bridge…The ministry quickly changed to supporting the community and the relief workers who came to assist…We were able to lend the parish Falcon to The Salvation Army who came to provide the catering in the relief centre and the parish cool-room trailer was plugged in…to provide refrigeration for the relief centre…The parish also Administered the Archbishop’s Emergency Relief Appeal, which provided emergency support for families, food and fuel vouchers…The community pulled together…” (p. 171).

This book’s fundamental message is that the nitty-gritty of the economic livelihoods, social activities, cultural expressions and spiritual wellbeing of those living in our rural communities is uniquely intertwined, as folk resiliently pull together through the ups and downs of daily life:

“As you can see, All Saints’ has never been ‘just’ All Saints’. There have been so many threads (woollen of course) woven into the mantle of pastoral, spiritual and community care, and relationships over many generations who have been faced with personal triumphs or hardships, fair weather or foul, droughts and floods, booms or recessions” (p. 182).

If communicating this message was a key aim of Mrs McLean’s book, then she has done a stellar job.

That dozens of local individuals and families ‘sponsored’ pages of the book, as well as assisted with research and contributed photographs, is testament to how supportive the All Saints’ congregation, and the broader Mitchell community, is of their folks’ endeavors. Over 100 hundred guests attended the All Saints’, Mitchell 130th anniversary event in December last year when the book was launched, with the event winning the Cultural Award at the recent Maranoa Regional Council Australia Day Awards. 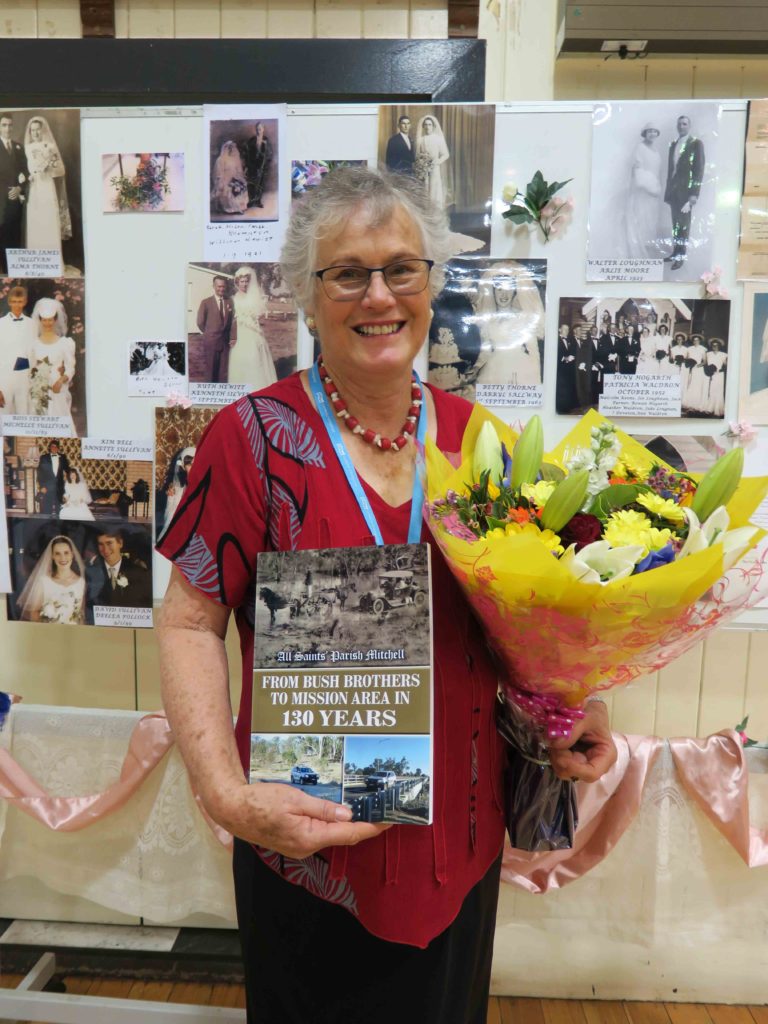 Parish Secretary and author Christine McLean from MWAMA with her book, From Bush Brothers To Mission Area in 130 Years, at the All Saints’, Mitchell 130th birthday event

Mrs McLean’s book is easy to read with its A4-sized full-colour format, large font, and the plethora of images used to illustrate the text, all of which are well captioned. Smooth prose and cleverly compiled content make the book equally enjoyable to read in a few sit-downs or coffee table style, flicking through discrete sections at random over time. While an index would have been handy on occasion, the table of contents and clear headers make searching for specific content easy enough. An excellent bibliography is provided, which will assist any local history buffs and researchers wanting to find out more.

I recommend this book to all ACSQ Anglicans and church history researchers for themselves and as a gift. A copy of the book has been provided to the Records and Archives Centre team, who helped Mrs McLean with her research, which I am sure they will put to good use.

To buy a copy of From Bush Brothers to Mission Area in 130 Years, contact Christine via mitchellchurch@outlook.com. Book costs $30, plus $14 p&p.