‘The Week of Prayer for Reconciliation’ (The National week for Reconciliation) did not go quite as we planned. Not long after it commenced we were all, I am sure, appalled by the death of George Floyd in America. It seemed to me to be so violent, senseless and unjust. This senseless action has triggered off a series of protests and riots around America, and protests here in Australia. It also reminded us that since the findings of the ‘Aboriginal Deaths in Custody’ report (1991) there has been a further 432 deaths in custody. Just in the last few days we have also witnessed the violent arrest of an Aboriginal teenager in New South Wales. We can see quite clearly that reconciliation means far more than saying the right words and uttering the right prayers for one week of the year. Something is very, very wrong with racial equality in both American and Australia, and needs to be changed.

‘The Aboriginal Deaths in Custody’ report makes for harrowing reading. How I wish that it simply described the past, as bad as that is, and is not in some way a prophesy of the present. I quickly add that not all police officers are violent murderous bullies. There are many fine police officers, just as there are many faithful Christians that make up their number. However, there is something wrong within mainstream Australia and America. Something deeply wrong with our institutions; including those set up for our wellbeing. It is systemic racism.

Most people I know would not accept that they are racist, and many take deep offence if you suggest that they might be. Systemic racism operates at the deepest levels of our society. Systemic racism, or institutional racism, by another name, refers to how ‘white superiority’ functions as the norm. It is the lens by which we see all things. It shapes the political system, police force, the educational system, legal system, employment practices, and, yes, even our Church. It shapes both you and me. All our social contexts are dominated by the, often unspoken and unrecognized, premise that being ‘white’, with all its associations, is inherently normative. This is why ‘Black Lives Matter’!

People of colour are just not seen as being on the same level of those who are not. The basic institutions of our society were established to serve and protect the dominant ‘white’ culture. ‘Black Lives Matter’ because we need to focus our thoughts and actions on those who suffer the most. People will be quick to say ‘but all lives matter’; and, of course they do. However, it is far too easy to gloss over the particular when we focus on the general. This is why we also focus on violence against women, but we all know violence against anyone is wrong; we focus on the protection of the children, but we all know that all people need protection from any form of abuse. Focusing on the particular helps us to address the universal. Jesus said ‘… just as you did it to one of the least these who are members of my family you did it to me’ (Matt 25: 40).

The 432 First Nations people who have died since the ‘The Aboriginal Deaths in Custody’ report was released, like George Floyd, have names, families, and stories of their past. They had hopes and dreams, and problems and issues. Many were arrested for relatively minor crimes. They were human beings with feelings, thoughts and blood running through their veins. They had possibilities for change. They are not just numbers. They were like you and me. They were God’s children. 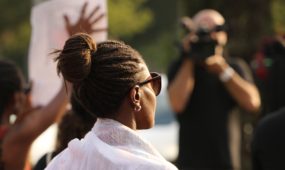 ‘The Aboriginal Deaths in Custody’ report made 339 recommendations of which only a few have been enacted, and, clearly, given the continued deaths in custody, have not addressed the core issues. What should we Christians do? For my part, Jesus provides the model. Jesus showed solidarity with the poor, the outcast, the marginalized, and rejected (Luke 4: 18 – 21). Surely, in our context, that is the First Nations peoples, and other people of colour. As Christians we should be some of the strongest advocates for justice for First Nations peoples, and work tirelessly and prayerfully to see the end of the senseless deaths in custody. Write to your state and federal parliamentary member and ask them what they are doing about it. I am! We also need to ask the hard questions of ourselves. As a church when it comes to systemic racism we also have some ‘logs to take out of our own eyes’ (Matt 7: 5). We have significant changes to make in our own church. As people of the light we can begin to walk in the light, and drive out the darkness (John 1: 4).

First published on the Anglican Board of Mission website on Thursday 4 June 2020.