It was 11am on Saturday 1 April 1916. Bush Brothers J Cyril Flood and Felix Albert Fernau had joined each other in the library of Brotherhood House, the All Saints’ rectory in Charleville for a cup of tea. Brother Fernau was about to head off to Cheepie, on the road to Quilpie, the next day to hold services. Suddenly, both men smelled smoke, and it wasn’t long before they realised that the smoke was coming from Brother Fernau’s bedroom. The subsequent tragic events ended the extraordinary life of Belgium born Felix Fernau, a man of courage and an adventurous spirit. 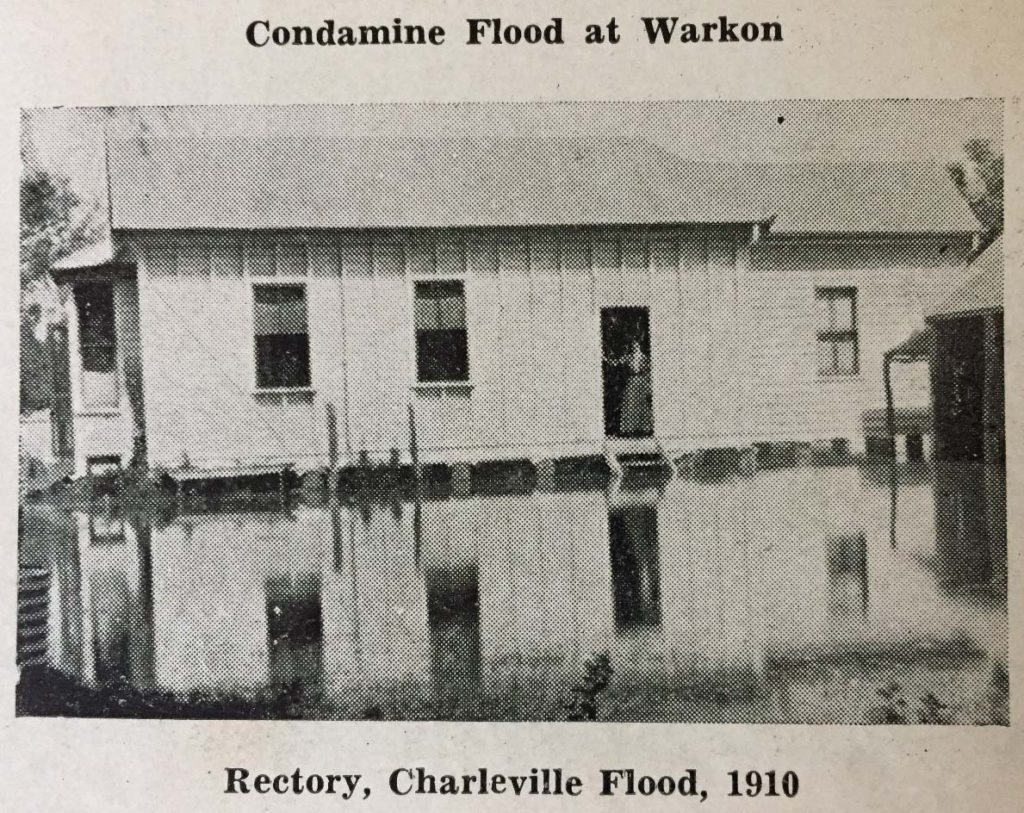 The Charleville Rectory in 1910 – image contained in the Jubilee Book 1901-1951 of the Bush Brotherhood of St Paul (Image courtesy of the Records and Archives Centre, ACSQ)

Brother Flood sprang into action, warning the housekeeper about the blaze and ringing the fire brigade. He had lost sight of Brother Fernau at that point. It was then he heard the church’s own fire alarm being rung. He assumed that this was Brother Fernau, only to be met with the horrific image of his fellow Bush Brother staggering into the library with smouldering clothes and glowing embers upon him. It seemed that he had attempted to gain access to the fire, but had been unsuccessful. Brother Flood helped extinguish his friend’s clothes and then set about moving furniture and documents outside to escape the blaze. Again, he lost sight of Brother Fernau.

The Rev’d Fernau at the 1914 Synod – bottom row, seated, fourth from right (Image courtesy of the Records and Archives Centre, ACSQ)

In the May 1916 Bush Notes Brother Flood gives a detailed account of what happened on that fateful day. He was so preoccupied with moving furniture, registers, and accounts outside, that he had no idea that Brother Fernau had decided to, once again, go into the flames. It was a decision that Brother Flood could not fathom:

“What happened to Mr Fernau subsequently it is difficult to say, as he was seen later coming out of the front door in flames and terribly burnt; it can only be conjectured that he went back as far as the dining room and was driven out on to the front veranda by the smoke and flames.” 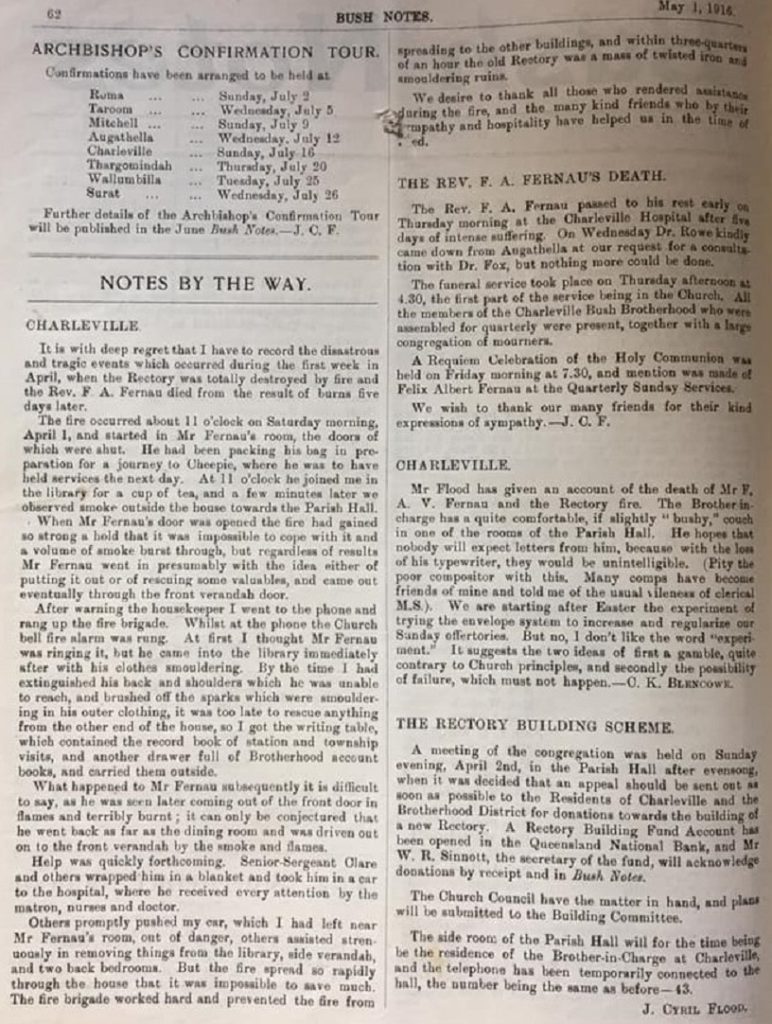 Feature about the rectory fire and Brother Felix Fernau, written by Brother J Cyril Flood and published in the May 1916 Bush Notes (Image courtesy of the Records and Archives Centre, ACSQ)

Exactly why Brother Fernau went back into the flames is somewhat of a mystery. He was taken to the Charleville Hospital and newspaper reports across Australia spoke of the hope that he would recover, as well as the sad destruction of the Bush Brother’s rectory. If the reason for his going back into the flames was conjectured, it was usually with the notion that he was trying to reach some personal property. It was only in the writing of this anglican focus story that a more substantial reason may have been uncovered. He lasted for a few more days, but succumbed to his burns on 6 April 1916, at the age of 43. 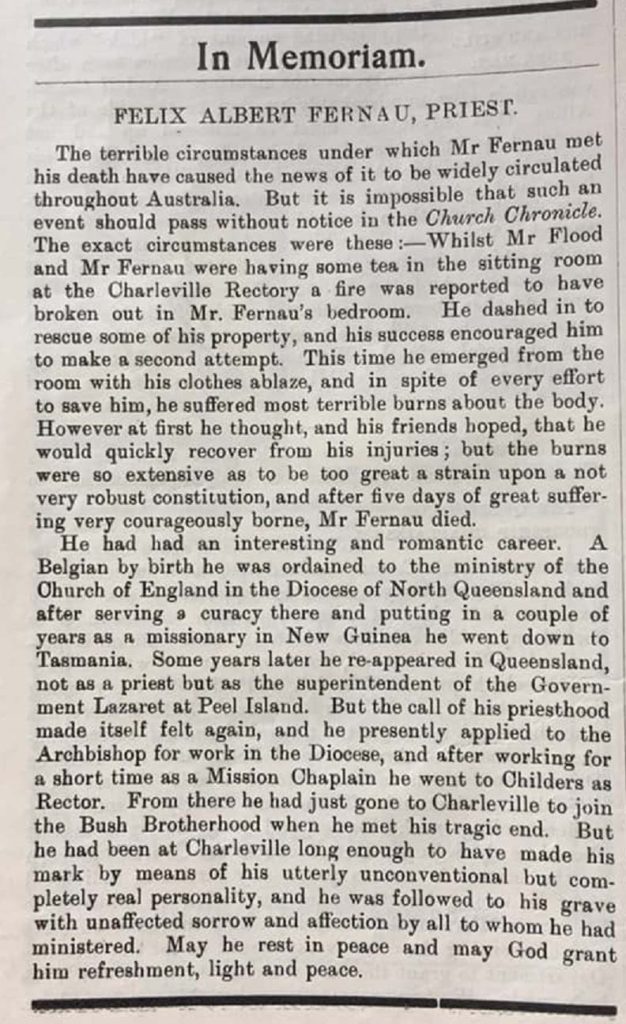 The ‘In Memoriam’ to Brother Felix Fernau in the May 1916 issue of the Church Chronicle (Image courtesy of the Records and Archives Centre, ACSQ) 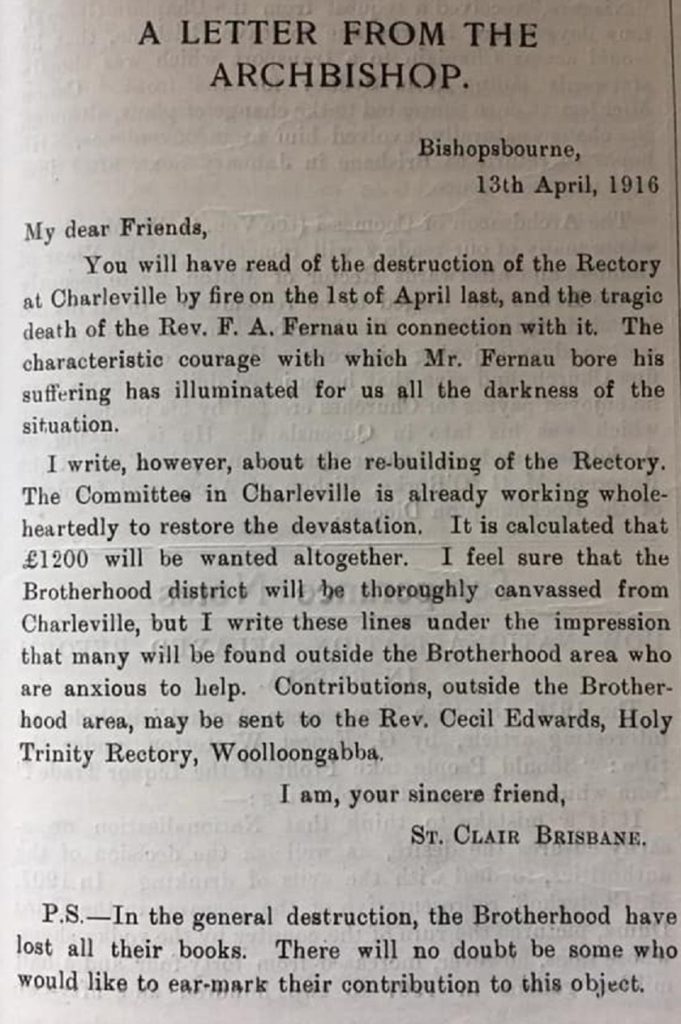 Archbishop Donaldson’s letter to the Diocese of Brisbane in the May 1916 issue of the Church Chronicle asking for help to rebuild the Charleville Rectory (Image courtesy of the Records and Archives Centre, ACSQ)

To say that Felix Albert Fernau led an exciting life is very much an understatement. He was born in Belgium, of both Belgian and English heritage, and had received his education at University College London. He had always had bad health, indeed the Bush Brothers had to wait for his arrival in Charleville as he had been delayed with a bout of malaria. His weak disposition led him to travel to Morocco as a young man – one of his brothers owned a business there, and he lived and worked in the warmer climate happily for a short while.

However, the need to keep moving quickly kicked in, and Fernau decided to travel across the world and become what in Australia would be called a ‘Jackaroo’ on a sheep farm in Buenos Aires. While there, he took up a vocation for teaching, giving English lessons in South America, before continuing in this pursuit in France, Belgium, and back in England. It was only then that he felt he could no longer ignore the call to ministry he had been feeling and went to St Aidan’s College, Birkenhead for clerical training. He was ordained by the Bishop of North Queensland, The Right Rev’d Christopher Barlow, who was in London at the time. This was perhaps a signpost to his future travels.

He took on the role of Chaplain on an immigrant ship to Australia. During the voyage most of the 500 passengers, and the ship’s doctor, suffered an epidemic of illness. In what could be seen as the first instance of his stepping in to aid in a crisis, Fernau took verbal instructions from the doctor and helped the passengers get to their destination. Once in Australia he went to Charters Towers before taking up missionary work in New Guinea. He is said to have circumnavigated New Guinea in a 14-ton schooner, before heading off for his next adventure, this time in Tasmania. 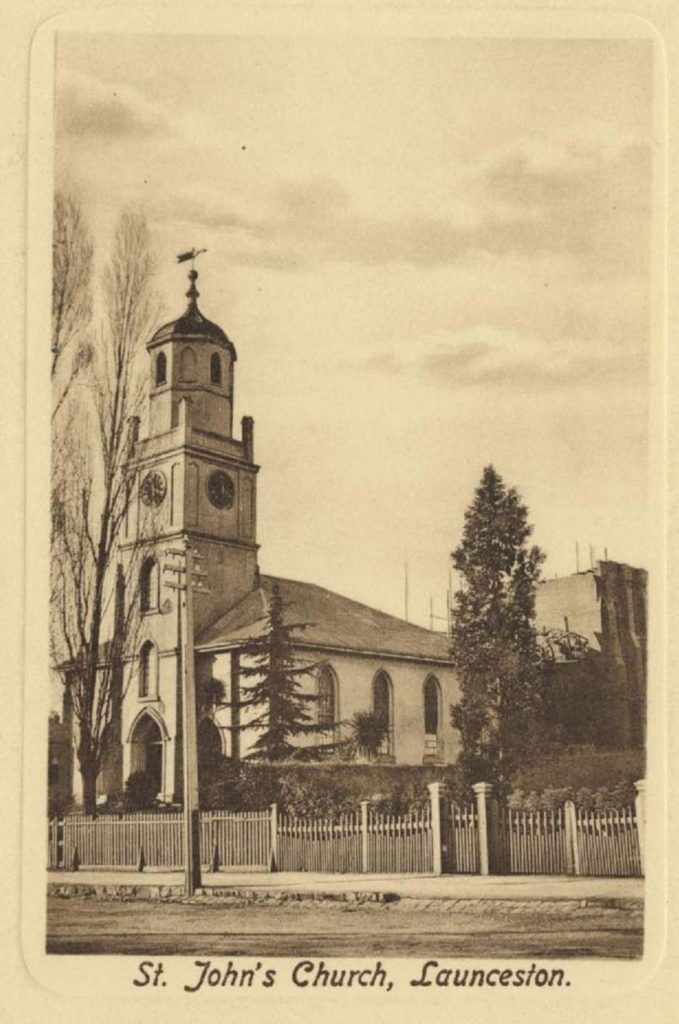 It was in Launceston, as a curate at St John’s Church, that Fernau, once again, faced an epidemic, this time smallpox. His willingness to aid the afflicted was much admired and he was named by many as being one of the heroes of that period of sickness. Perhaps it was this capacity to serve in such circumstances that led Fernau to his next post, back to Queensland, not as a priest, however, but as the superintendent of the Peel Island Lazaret, a quarantined hospital off the coast for those suffering from leprosy. It was now 1912, and before long Fernau found his way to our Diocese. Archbishop Donaldson accepted him and appointed him first as a Mission Chaplain, and then as the Rector of Childers until 1915. It was then he asked to be moved into the Bush Brotherhood, where, at Charleville, he would meet his untimely fate. 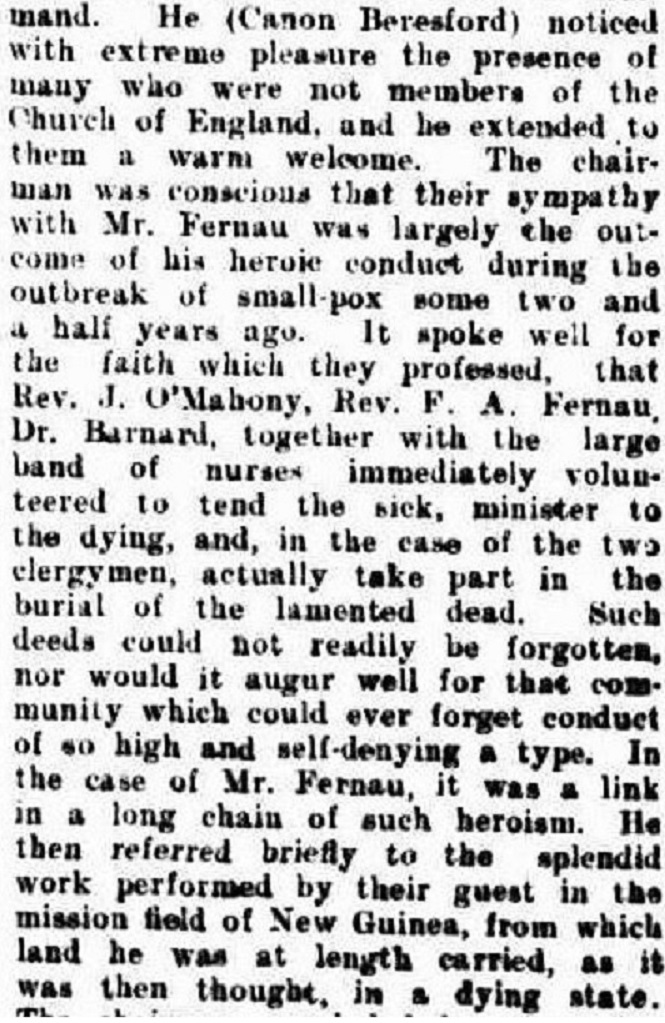 A report on the departure and farewell of The Rev’d Fernau from Launceston, Examiner, 28 June 1905 (Article courtesy of TROVE)

So why did Felix Fernau rush back into the fire for a second time on that April day in 1916? As we have seen, he certainly was a brave man, and perhaps his courage got the better of him. Or, as some press coverage claimed, perhaps he was trying to rescue some personal property. An alternative answer to this riddle, however, may have been discovered in the course of researching this article. In seeking an image of Felix Fernau, we contacted the Bush Brothers Heritage Centre, associated with the Brotherhood of the Good Shepherd in Dubbo, and which serves as a repository for many of the various Bush Brotherhoods that have existed in Australia. We asked Austin Jupp at the Heritage Centre if he had any images of Brother Fernau. He had one. When it arrived in the email Inbox, it showed an image of a shy looking bespectacled priest with a shaggy canine sitting beside him. The caption of the photograph stated: 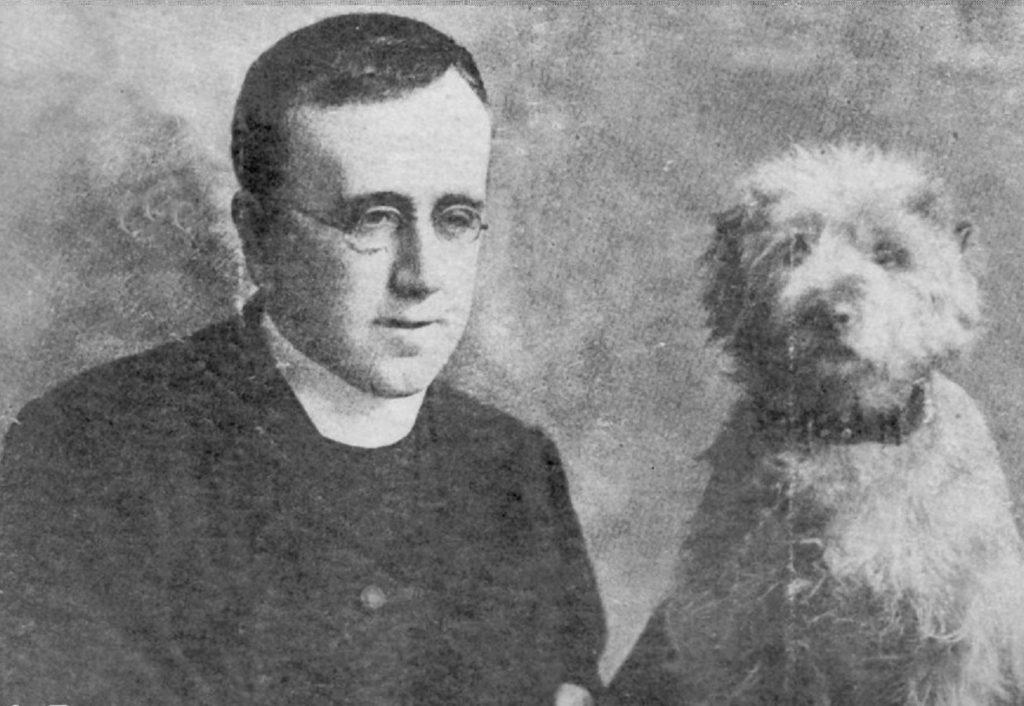 While we can’t know for certain the full details, there is no date for the photograph, and no name of the dog written, it is perhaps nice to think that the story of this rescue attempt, of what was likely Fernau’s best friend, was handed down from Brother to Brother and has made its way to us today. This mystery serves as yet another reminder that, while he met a tragic end, in the 43 years that Brother Felix Fernau lived, he led an extraordinary life.