The anglican focus Editor advises that this feature contains content that may be distressing for some readers.

Dr David Livingstone has long been a hero of mine. In 1841 he was sent as a medical missionary to South Africa by the London Missionary Society. Recently, I was the successful bidder at an online auction for a medallion celebrating the centenary of the London Missionary Society in 1895. It is a beautiful medallion and it motivated me to learn more about the society, as well as about other missionary organisations. 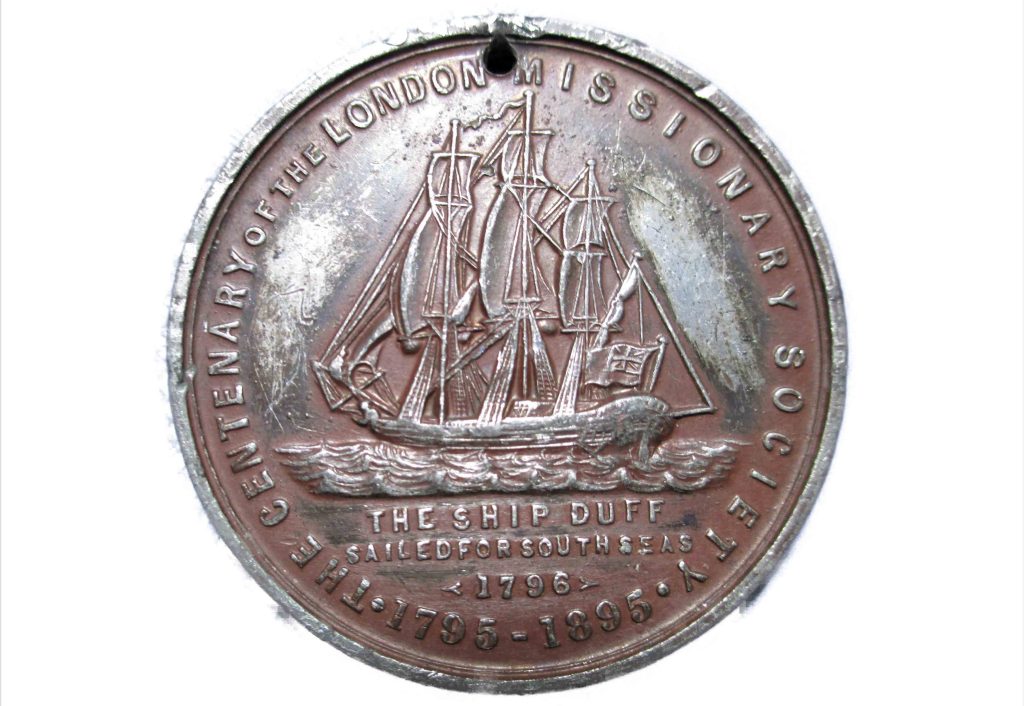 Medallion celebrating the centenary of the London Missionary Society in 1895. It is 45 mm in diameter (obverse) 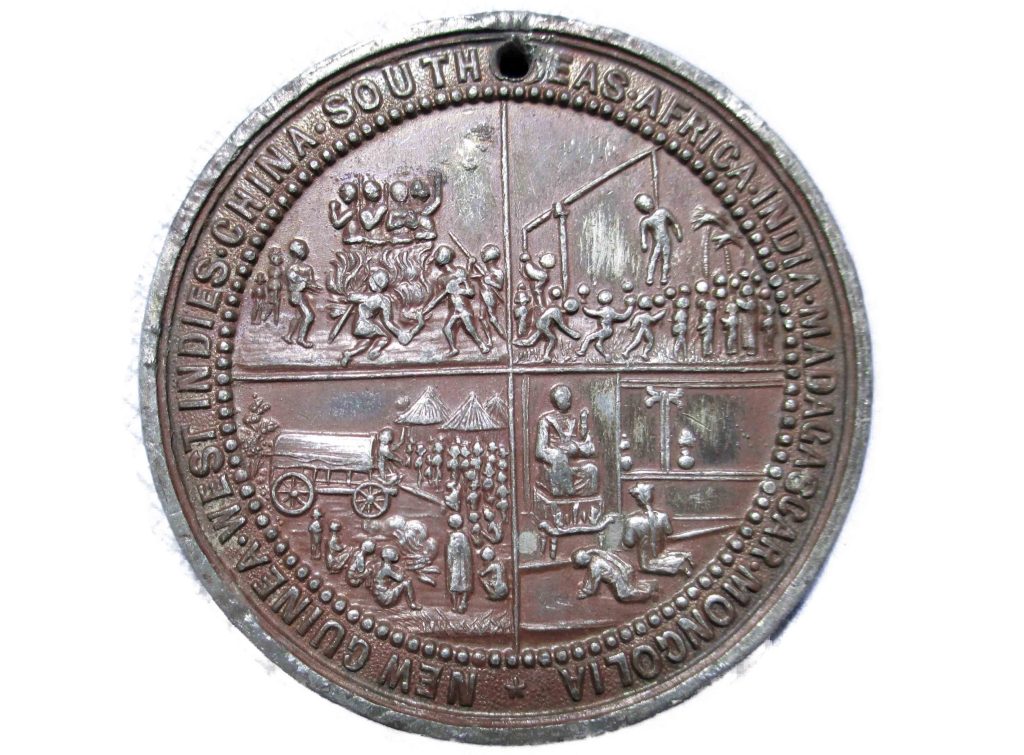 Medallion celebrating the centenary of the London Missionary Society in 1895. It is 45 mm in diameter (reverse)

The London Missionary Society (LMS) was founded in 1795, but it was not the first organisation to send missionaries to remote parts of the world. In the 16th and 17th centuries Jesuit missionaries went to various places, including China and Japan. Two Church of England societies, the Society for Promoting Christian Knowledge (1699) and the Society for the Propagation of the Gospel in Foreign Parts (1701), worked among the first inhabitants in North America and elsewhere. 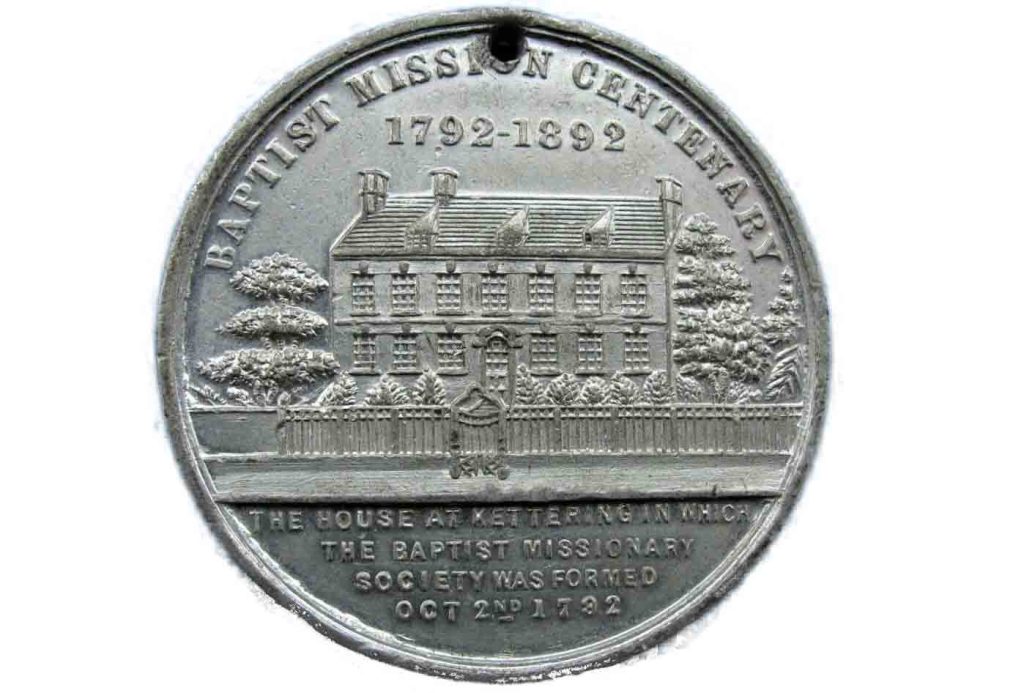 Medallion celebrating the centenary of the Baptist Missionary Society in 1892. It is 45 mm in diameter (obverse) 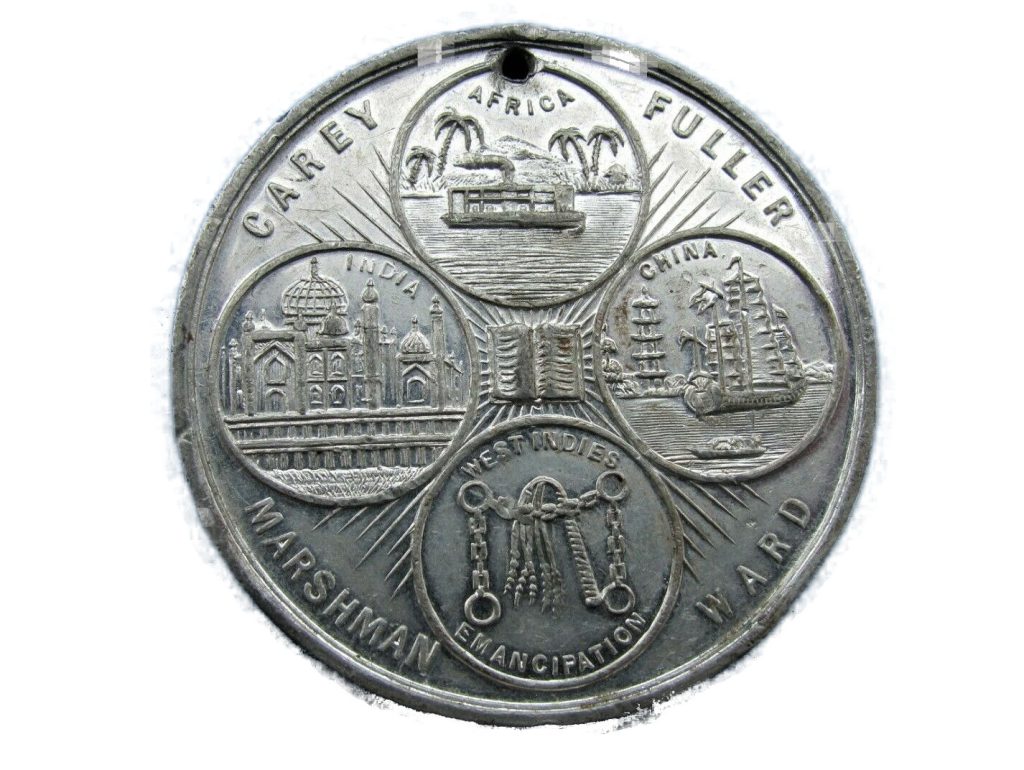 Medallion celebrating the centenary of the Baptist Missionary Society in 1892. It is 45 mm in diameter (reverse)

The house at Kettering is on the obverse (the side bearing the principal design), and in the centre of the reverse there is a radiant open Bible surrounded by four circular pictures. The top picture is labelled “Africa” and shows a small steamship presumably on Lake Victoria. On the left is “India” with a mosque, and on the right “China” with a British ship sailing past a pagoda. The bottom of the medallion features brutal slavery chain and whip symbols with the words “West Indies” and “Emancipation”.

Around the edge of the reverse are four surnames. Andrew Fuller was the secretary of the Baptist Missionary Society from 1792 to 1815. William Carey was commissioned by the society and arrived in Calcutta in 1793, but the East India Company did not want missionaries in their territories and in 1800 he moved to the Danish colony of Serampore. By 1809 he had translated the whole Bible into Bengali. Joshua Marshman and William Ward also went to India and worked with Carey.

The LMS was formed in 1795 and mostly involved Congregationalists, but included members of other Protestant denominations, as well as evangelical Anglicans. In 1794 William Carey in Calcutta wrote a letter to a Baptist minister in England stressing the need to spread Christianity and he suggested that a non-denominational effort be made. Various influential people became interested and the new missionary society became a reality. Reflecting common missionary language and misconceptions of the day, the stated aim was:

“To send God’s saving light and truth to every dark land; to preach Christ crucified to a guilty world; to lift the millions of the heathen, sunk in superstition and sin, out of gross ignorance, wretchedness and despair, into the bright daylight of Divine revelation.”

The initial focus of the LMS was on Oceania – the islands in the Pacific. A sea captain, James Wilson, offered to take missionaries to Tahiti free of charge, providing the LMS gave him a vessel. So the society bought the ship Duff, which could carry 30 missionaries and 18 crew. In 1796, seven months after leaving England, the Duff arrived in Tahiti but the islander inhabitants were understandably unfriendly and only nine missionaries decided to remain on the island. 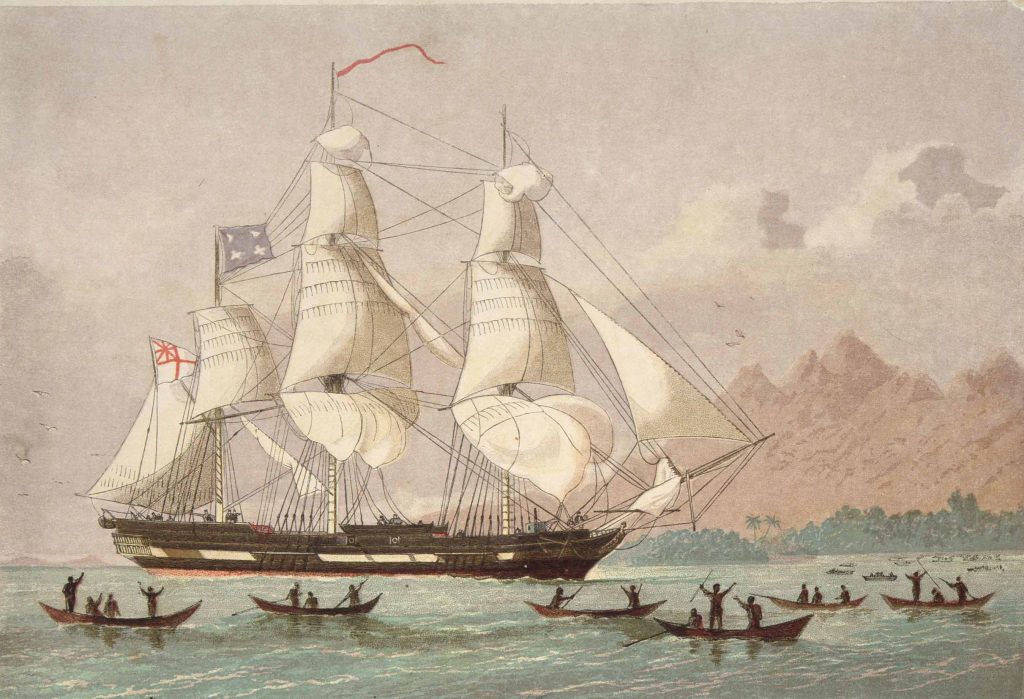 Missionaries were left on other islands before the Duff returned to England. Then it was sent again to the Pacific with 30 missionaries, but unfortunately when it was in the South Atlantic it was captured by a French privateer, an armed vessel privately owned, but authorised to capture enemy ships. 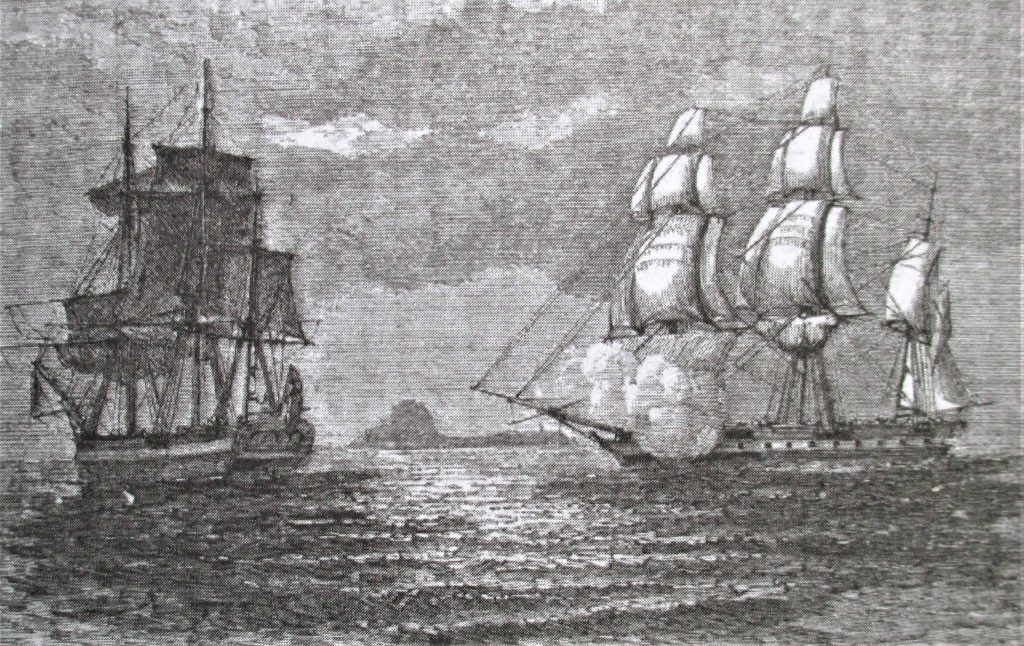 The French privateer, Buonaparte, captures the Duff in moonlight near Montevideo (Engraving in Missionary Ships connected with the London Missionary Society by Ebenezer Prout, 1865)

The privateer unloaded its prisoners at Montevideo (Uruguay) and sold the Duff. The cost of all this was financially devastating for the LMS, but it gradually recovered and was determined to continue its mission.

The Duff appears on the obverse of the centenary medallion in Figure 1 above. It is a wonderful example of the die-engraver’s skill: Duff’s sails billow out and her flag waves in the wind, and if you look too long at the sea you might even feel seasick! On the reverse there are four missionary scenes surrounded by the words “New Guinea”, “West Indies”, “China”, “South Seas”, “Africa”, “India”, “Madagascar” and “Mongolia”. In the scene at the top left, four Christians are being burnt alive in Madagascar while a local inhabitant on the right holds a spear in a threatening manner. It is horrible, but the Christians are depicted in  prayerful poses. In the scene at the top right, a man is being hanged with slaves featuring in the foreground. He is probably abolitionist John Smith who was hanged in British Guiana in 1824 by colonial authorities. In the scene at the bottom left, a missionary preaches from a covered wagon in South Africa, with local inhabitants gathering around a fire to listen. In the scene at the bottom right, men from China prostrate before a traditional idol. 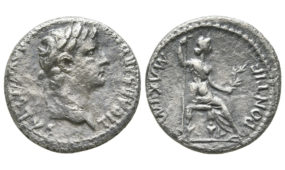 In 1807 the LMS sent Presbyterian preacher Robert Morrison to China. He worked in Macau and Canton and pioneered the translation of the Bible into Chinese. He spent 27 years in China and made a lasting impact on that country. Congregationalist missionary Walter Medhurst also did great work for the LMS in China. Hudson Taylor worked independently, identifying with the people and wearing Chinese dress, founding the China Inland Mission in 1865.

In 1817 the LMS sent John Williams and his wife to the Society Islands, a group of islands in the Pacific that included Tahiti. Based on the island of Raiatea, just north-west of Tahiti, John visited many Polynesian islands. After sharing the good news with a number of locals, they then spread the Gospel to other Pacific islands. In 1871 some converts from the Pacific came to the Torres Strait Islands with LMS missionary, Samuel Macfarlane, and were very successful there.

“…it is important for all Anglicans to understand that Jesus was present in my people before the Bible came to the Torres Strait Islands. Our spirituality lies in the sea, sky and land and since time immemorial our people have believed in a Creator, but we did not know that the Creator was the Christian God.”

LMS missionaries also worked with Australian Aboriginal peoples, as mentioned in The Bible in Australia: A Cultural History, by Meredith Lake. 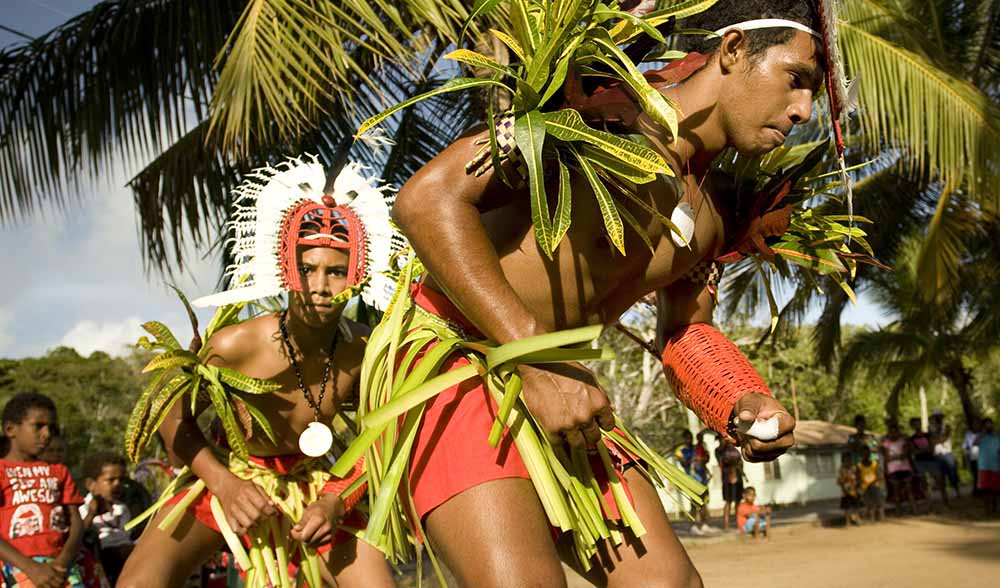 In 1834 John Williams returned to England to supervise the printing of his translation of the New Testament into the language of Rarotonga. In 1837 he was again in the Pacific, and in 1839 he visited Eromanga in Vanuatu. Along with another missionary, James Harris, he was killed and eaten. After speaking to a number of eyewitnesses, missionary H.A. Robertson ascertained that the attacks followed violence committed by previous white visitors, including murdering locals and abducting women. In 2009 during a moving island ceremony, the descendants of John Williams accepted the apologies of the descendants of those who killed their ancestor. 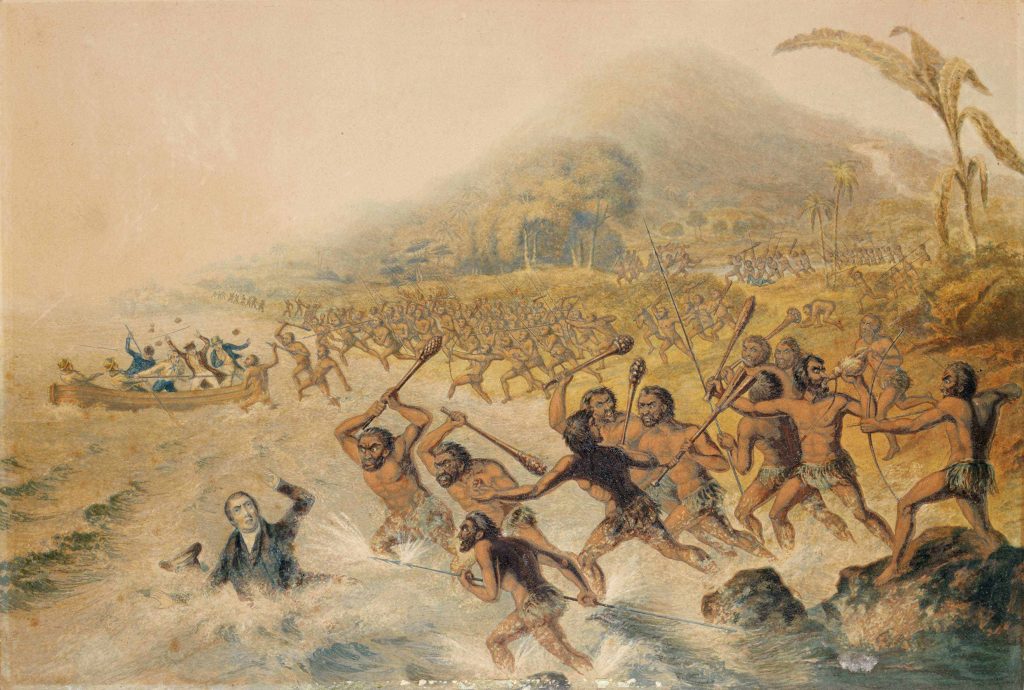 To honour John Williams the LMS named all their missionary ships after him, and a medallion was struck showing the first John Williams launched in 1844.

Medallion issued by the London Missionary Society describing the John Williams missionary ship on the obverse, and on the reverse its purpose and funding by children. Diameter 41 mm (Author’s collection, obverse) 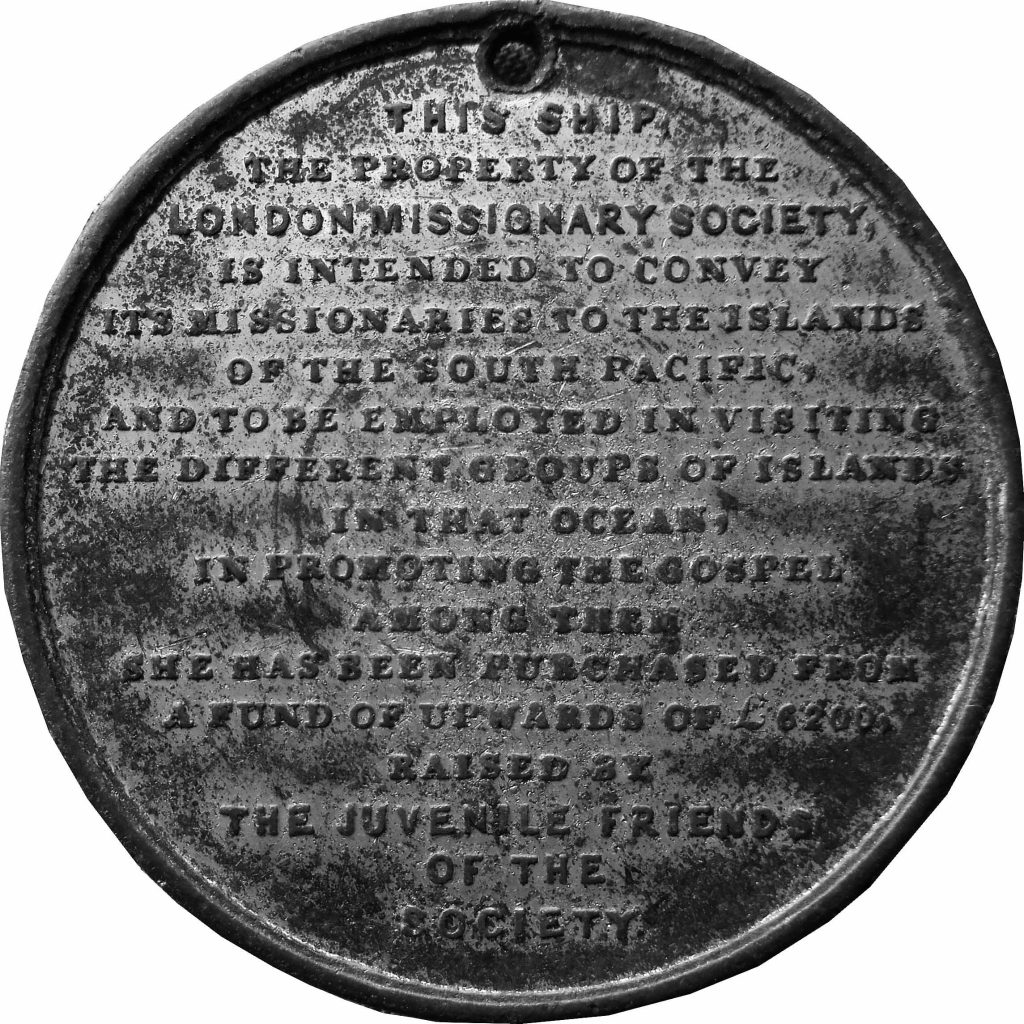 Medallion issued by the London Missionary Society describing the John Williams missionary ship on the obverse, and on the reverse its purpose and funding by children. Diameter 41 mm (Author’s collection, reverse)

Sadly, it was wrecked on a reef at the atoll of Pukapuka in the Cook Islands in 1864, but the passengers and crew survived. The LMS operated six more missionary ships, the last decommissioned in 1968. As explained on the reverse of the medallion in Figure 7, the ships were funded by donations from children, an amazing testimony to the strength of Christianity in Victorian Britain. At the Annual Public Meeting of the LMS in 1837, the society’s operations were reported, and among the speakers were missionaries from Africa, America, India and China. The society had 428 stations staffed by 114 missionaries and 482 assistants who supervised 84 churches and operated schools with 34,222 students. Expenditure for the year totalled £63,160.

The most famous LMS missionary was Dr David Livingstone. His achievements were an inspiration to Christians all over the world and many medallions were struck in his honour. 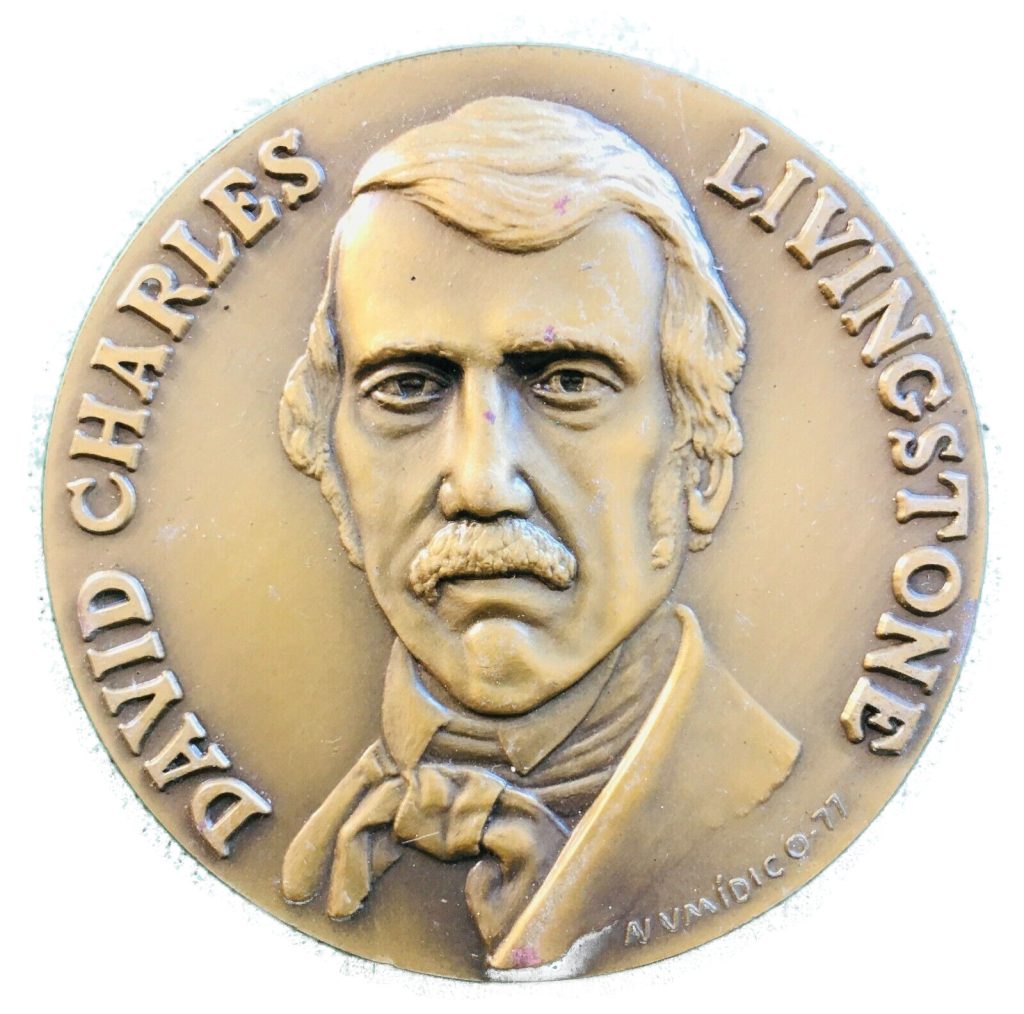 Medallion in honour of David Livingstone made by the sculptor Numidico in Portugal in 1977. Diameter 68 mm (Author’s collection, obverse) 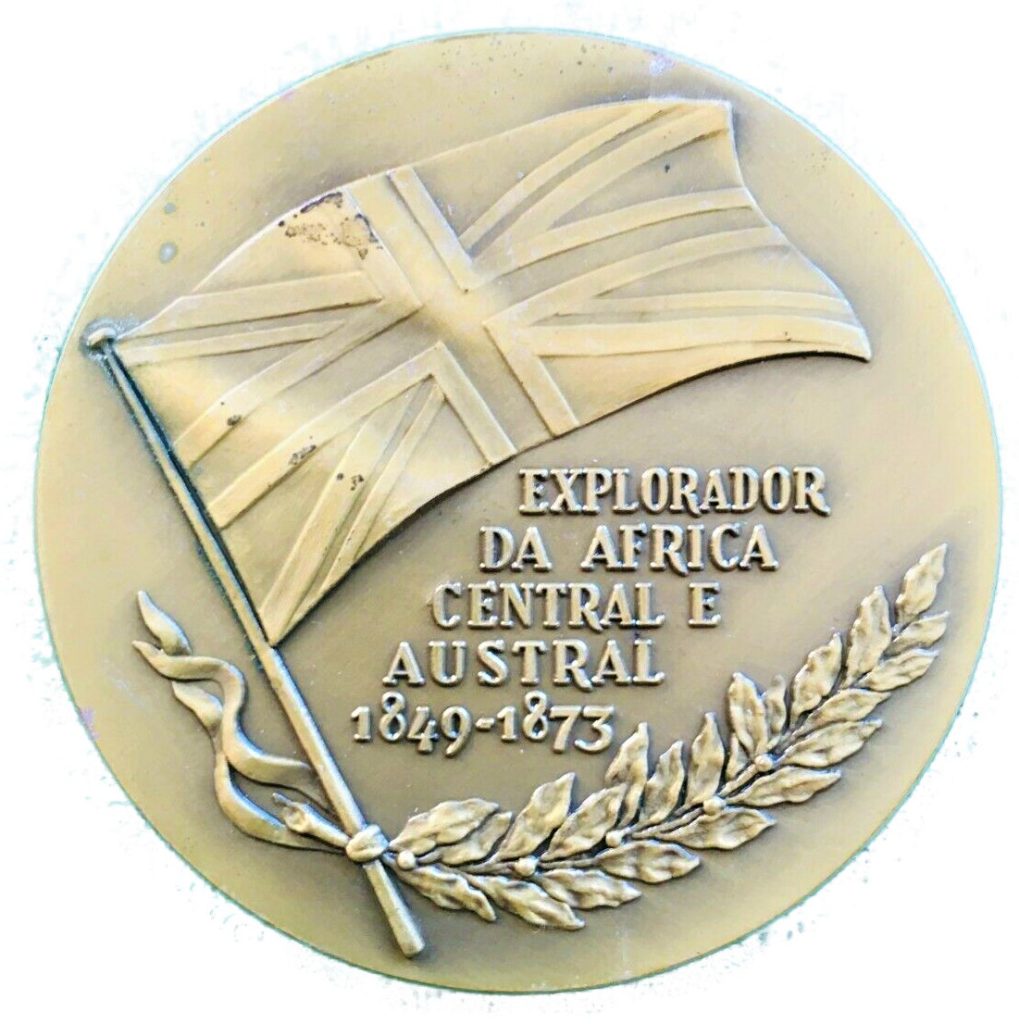 Medallion in honour of David Livingstone made by the sculptor Numidico in Portugal in 1977. Diameter 68 mm (Author’s collection, reverse)

Born in Scotland in 1813 he was one of seven children to poor working-class parents. They all lived in a single room in a building for workers in a factory. At age 10 he went to work in a cotton mill. When he was 21 there was an appeal by the churches for medical missionaries and David responded by studying medicine. At age 25 he was accepted by the LMS and went to Africa where he explored much of the country. He was appalled by the slave trade and became a fervent anti-slavery advocate. He visited Victoria Falls, was mauled by a lion and thought to be lost, but a Welsh-born American newspaper reporter, Henry Stanley, went to find him. Eventually the two met in the heart of Africa in November 1871 when Stanley spoke the immortal words, “Dr Livingstone, I presume?” Livingstone was ill and died in Zambia in 1873. His African servants buried his heart and carried his embalmed body for nine months to the coast. In Britain he had become a national hero and after a great Victorian funeral his body was buried in Westminster Abbey. 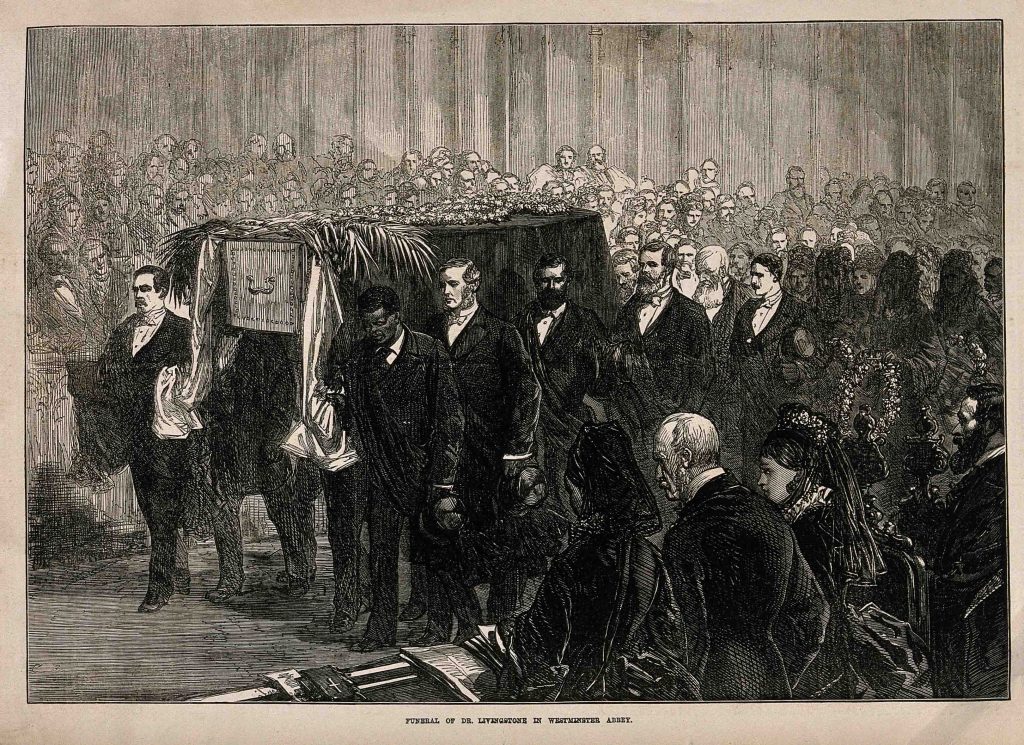 He had been very influential in the slavery abolition movement, and in 1972 to remind people of Livingstone and the horrors of the slave trade, a Scottish bank issued a £10 note with three African slaves on the reverse. 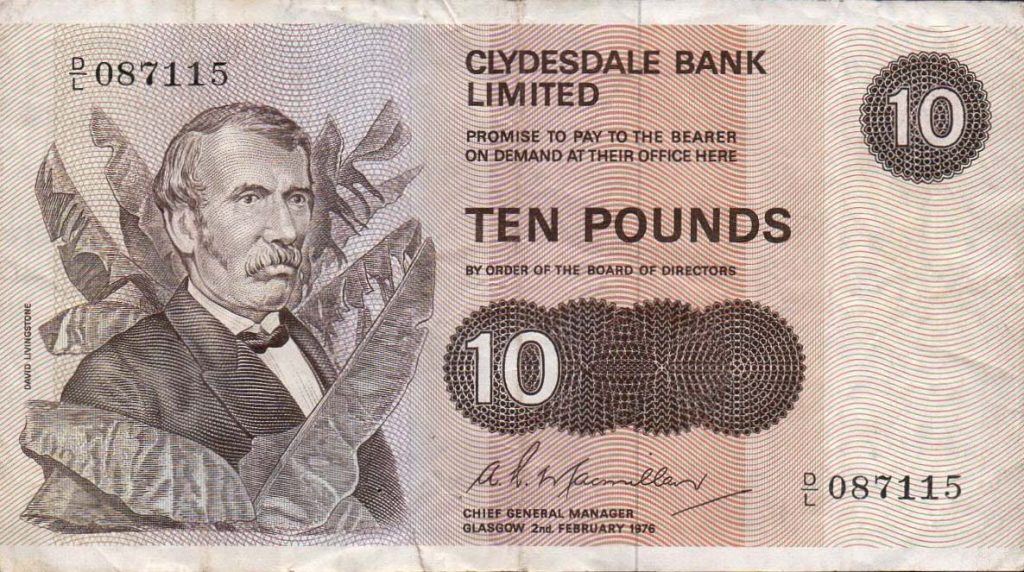 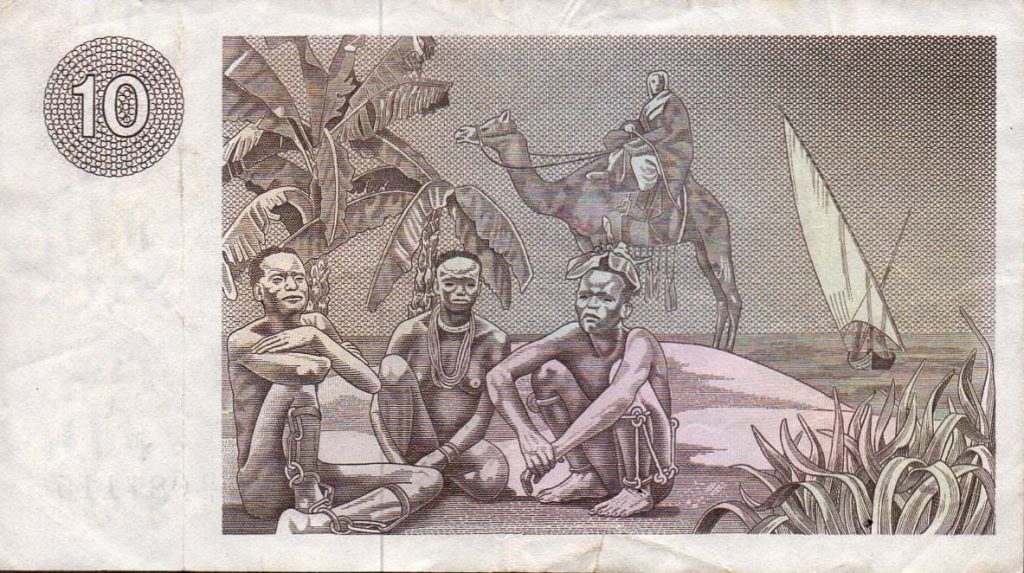 Pilgrims visit Westminster Abbey and stand before the grave of David Livingstone, bowing their heads in reverence.

In 1799 the Society for Missions to Africa and the East was formed, later becoming known as the Church Missionary Society (CMS). In 1899 a medallion was issued for the centenary of the CMS. It shows a missionary preaching to men representing various First peoples. 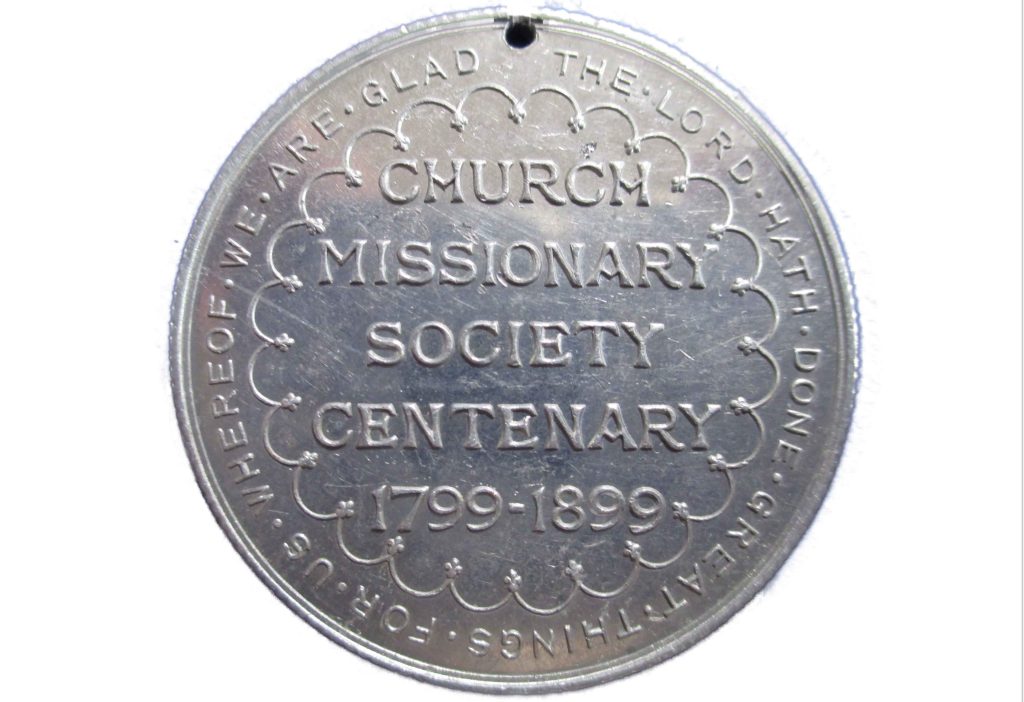 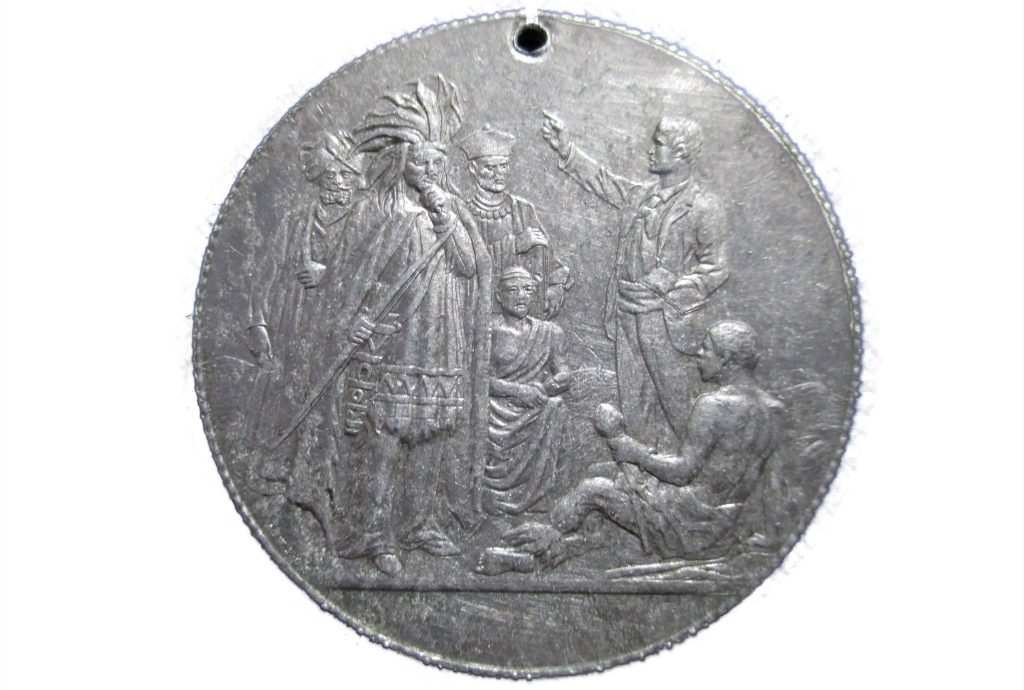 The CMS continues to do missionary work in many parts of the world. In 1966 the LMS merged with the Commonwealth Missionary Society and eventually became the Council for World Mission. The LMS accomplished its mission of taking the Gospel to every part of the world. All missionaries, especially those who lost their lives, should be remembered.

The Anglican Board of Mission was established in 1850 following a plea by Bishop Selwyn for funds to buy a boat to take the Gospel to the islands of Melanesia. It is the national mission agency of the Anglican Church of Australia, and it does great work.