Archbishop Desmond Tutu, who has died today at the age of 90, was a key leader in the moral struggle against the apartheid system in South Africa, but the impact of his life’s ministry and witness extended far beyond the borders of his own country and beyond that historical moment. Also in the post-apartheid era, his principled commitment and engagement for justice for all remained unwavering. Tutu believed passionately that the Christian faith is inclusive of all, and that Christian responsibility is for the good of all people. His leadership strengthened us all in that belief and continues to call us to action upon that belief. 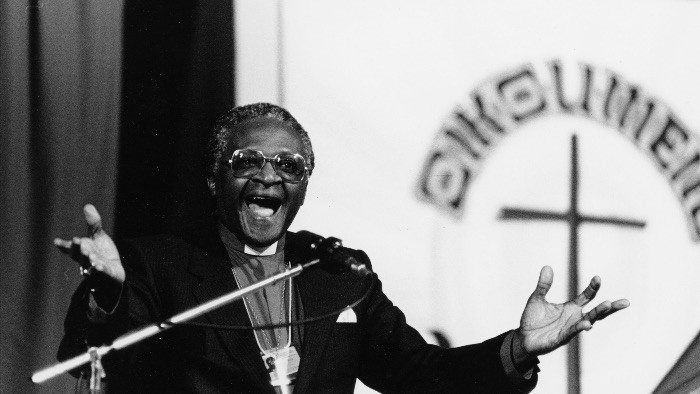 World Council of Churches (WCC) acting general secretary Rev. Prof. Dr Ioan Sauca said Archbishop Tutu was a stalwart contributor to the ecumenical movement during joyful times and times of great challenge, and taught us all the value of persistence. “We thank God for giving us Archbishop Tutu for 90  years,” said Sauca. “Through his life and works he has become an image of dignity and freedom for all human beings and  inspired many to use their gifts and talents in the service of others and the mission and prophetic task of the church.” 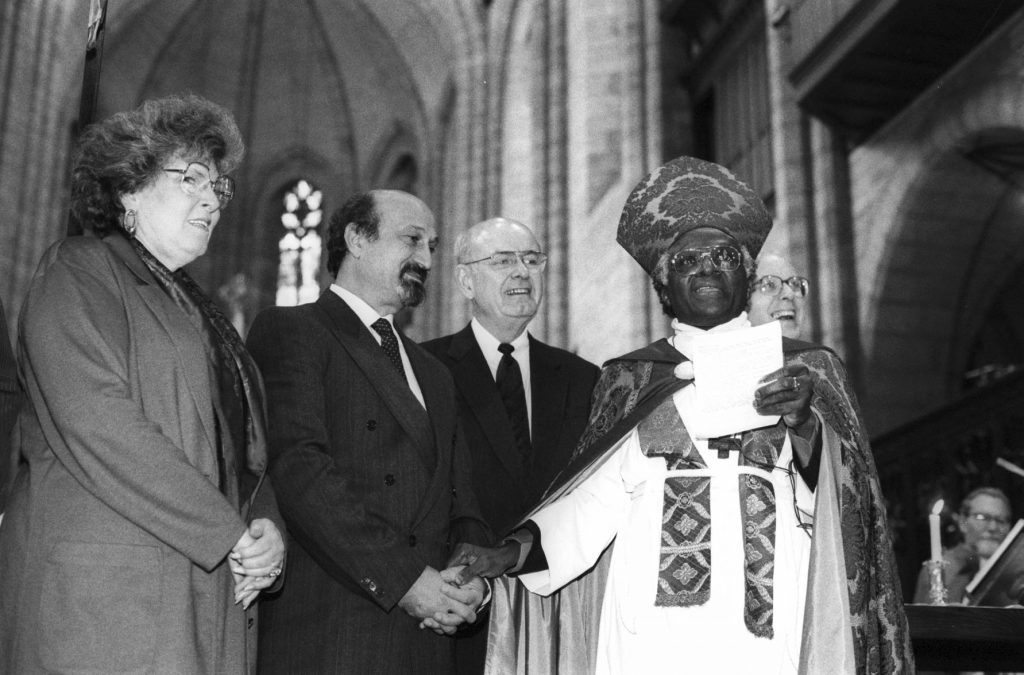 Rev. Frank Chikane, moderator of the WCC Commission of the Churches on International Affairs, paid tribute to his counterpart in the struggle against apartheid: “In Archbishop Desmond Tutu we have lost a great prophet of God who lived among us and stood for justice – the justice of God for all – here in South Africa, on the African continent, and throughout the world, including standing against injustices committed against Palestinians in Israel-Palestine, where others would not dare to. We thank God for his prophetic witness which is worth celebrating nationally and internationally.”

As well as powerful and forthright voice against injustice, Tutu was also a prophet of forgiveness. In his role as chairperson of South Africa’s Truth and Reconciliation Commission, he became, as the former head of WCC Programme to Combat Racism Baldwin Sjollema recalls, “the pastor of the nation.” Tutu stressed time and again that there could be no future without forgiveness. “You can only be human in a humane society. If you live with hatred in your heart, you dehumanize not only yourself, but your community,” Tutu said.

The years of 1972-1975, when Tutu served as WCC programme executive, contributed to a turning point in his theological thinking. When he joined the WCC’s Theological Education Fund in London, his senior colleagues – the Taiwanese Shoki Coe and the Brazilian-Armenian Aharon Sapsezian – were engaged in the promotion of theological education focused on the needs of churches and congregations in the “Third World”. This was the origin of the decolonial notion of “contextualization”. I have the deep conviction, Sapsezian wrote in his memoirs, “that his years with the TEF and our constant open theological conversations contributed to the improvement of his analysis and his perception of social injustices in the world and in his continent.”

Porto Alegre, Brazil, February 2006. “A united church is no optional extra,” said Archbishop Desmond Tutu in an impassioned speech to the WCC 9th Assembly in Porto Alegre. Rather, he said, it is “indispensable for the salvation of God’s world”. Tutu’s audience had just taken part in a plenary session on church unity. “We can be prosperous only together. We can survive only together. We can be human only together” (Photo: Igor Sperotto/WCC)

Sjollema recalled Tutu’s impact on the WCC’s Programme to Combat Racism. “Back in the 1970s, Desmond and I were colleagues at the WCC,” wrote Sjollema. “He was working for the Theological Education Fund (TEF) based in London whereas I was working in the controversial Programme to Combat Racism (PCR) in Geneva which supported the liberation movement.”

The two were not always on the same wavelength, said Sjollema.

“At that time Desmond had to be careful not to be too outspoken against the Pretoria regime in order not burn his bridges at home,” he said. “But his attitude changed radically after his return to South Africa when he was appointed dean of Johannesburg in 1975 and one year later Anglican bishop of Lesotho, then General Secretary of the South African Council of Churches (SACC) and finally the first black Archbishop of Cape Town (1987).” 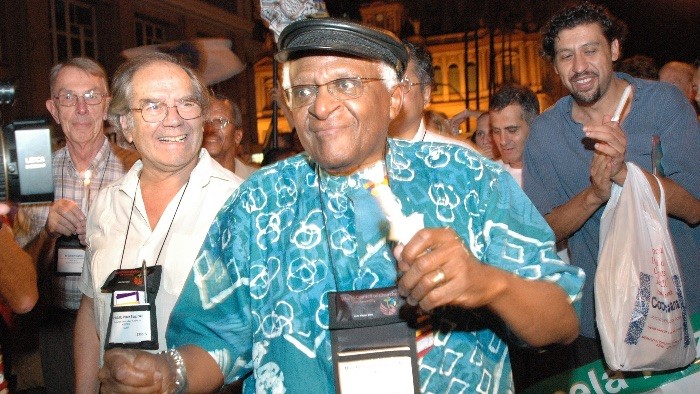 Archbishop Tutu’s impact on the life of the ecumenical movement and on the work of the WCC was pivotal.

Sauca added “Today, with Desmond Mpilo Tutu’s passing, the world is very much poorer. We join the people of South Africa in mourning this stalwart of the resistance against apartheid. We join the Anglican Communion and all members of the ecumenical fellowship in mourning the Archbishop who has so long been a leading voice for the Christian faith in witnessing for justice instead of injustice and inclusion instead of exclusion. And we join the Tutu family in mourning a father, grandfather and husband.” 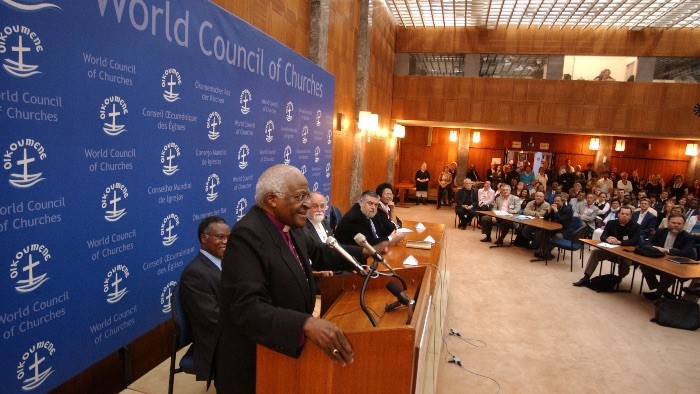 Geneva, Switzerland, May 2008. Archbishop Desmond Tutu addressed ecumenical officers of churches from all over the world as well as staff from ecumenical organizations headquartered at Geneva’s ecumenical centre. Recalling the struggle against apartheid in his country, Tutu affirmed the empowerment felt by anti-apartheid activists when knowing that people all over the world were praying for them. “When you know someone is praying for you, in Alaska, by name, what chance does the apartheid government have?” (Photo: Peter Williams/WCC)

Desmond Tutu’s convictions and witness especially against racism, racial discrimination and xenophobia continue to inspire our efforts for a world free from these ills.

Sauca concluded “We invite all member churches, ecumenical partners and all people of good will to celebrate a life well and faithfully lived in service to God and humanity, and to uphold his legacy of consistent solidarity with the marginalized communities of this world.”

In a visit to the Ecumenical Centre in 2008, Tutu thanked the WCC for its “costly solidarity” at the time of the anti-apartheid struggle. “We would not be free had not been for the steadfast support of the WCC, which cost the WCC a very great deal,” he said. 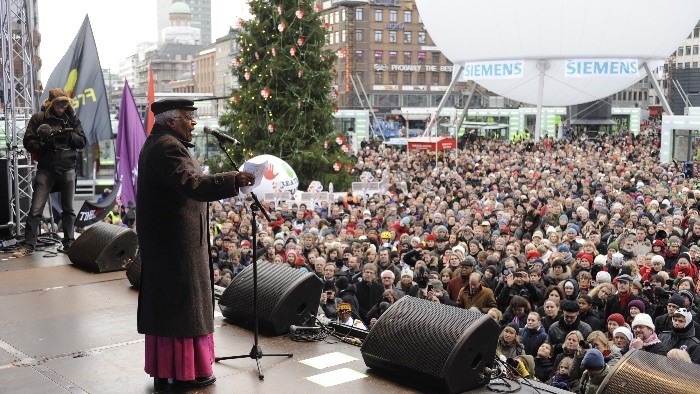 Copenhagen, Denmark, December 2009 .About 5000 people were crammed in and around the city square on Sunday morning to see Archbishop Desmond Tutu hand over more than half a million signatures to UN Climate chief (Photo: Peter Williams/WCC)

Desmond Tutu: Pastor of the Nation – A Tribute | World Council of Churches

Desmond Tutu’s address to the 9th Assembly of the World Council of Churches, Porto Alegre, 2006

Desmond Tutu: “Caring and compassion will prevail over evil and injustice” (WCC news release 20 May 2008)

First published on the World Council of Churches website on 26 December 2021.