No matter how hard you look, you won’t find “Easter” in the Bible. The word “Easter”, that is; not the event itself. There aren’t many languages that call the celebration of Jesus’ resurrection “Easter”, or anything similar. Most European countries have words that resemble the Latin or Greek word Pascha, which is itself a word derived from an Aramaic word Paskha. This, in turn, is a similar derivation of the Hebrew word Pesach, which comes from the name of the Jewish festival that, in English, is rendered as “Passover”. This makes sense since this is the festival that Jesus and his disciples were in Jerusalem to celebrate, and which we commemorate on Palm Sunday (a festival of the Church that commemorates Jesus’ triumphant entry into Jerusalem) a week before Easter Day.

So why do Germanic languages (of which English is one) use this strange word, “Easter”? No one actually knows for certain but, to get a possible clue as to its origin (along with some of the traditions associated with the celebration), we need to go back to Bede, the Venerable.

For those who are unaware, this 8th century English monk and historian from Jarrow in Northumberland, chronicled The Ecclesiastical History of the English People, which details the birth of the Church in England from Anglo-Saxon times. However, it is in another of Bede’s works, The Reckoning of Time, that he gives an explanation of the word “Easter”. In just one reference, he notes that “Easter” is named after the goddess Eostre: a fertility goddess whose festival is celebrated in the spring (in the northern hemisphere), and whose symbol is the hare (the origin of the Easter bunny).

Bede wrote that she had been celebrated by pagans during a month that became known as Eosturmonath in Old English, corresponding to April in the Gregorian calendar. In chapter 15 of The Reckoning of Time, Bede wrote that:

“Eosturmonath has a name which is now translated ‘Paschal month’, and which was once called after a goddess of theirs named Eostre, in whose honour feasts were celebrated in that month. Now they designate that Paschal season by her name, calling the joys of the new rite by the time-honoured name of the old observance.”

No other works predate this explanation of the origin of “Easter” – all we have is a single reference in a single document by a single author. Few other historical “facts” are based on such scanty evidence. Additionally, when you think about it, it doesn’t even make sense. It’s true that Christianity hijacked a number of pagan festivals and “Christianised” them to remove as much of the pagan ritual from them as possible. The midwinter festival, for example, became Christmas. However, the original name for this festival, Yuletide, was removed from religious celebrations and exists today primarily on secular Christmas cards. Since the early Christians were determined to drive out paganism, it seems somewhat odd to retain the name of a pagan goddess for Easter, which is the main Christian festival of the year!

A more likely source for the name comes from a much older German word eostarum. This, in turn comes from an even older Latin word meaning dawn, since, in springtime, dawn marks the beginnings of days that will last longer than nights. And dawn starts in the east. So spring leads to dawn, which leads to east. So many scholars believe that “Easter” is merely a reference to the compass point from which the lengthening days of spring originate. 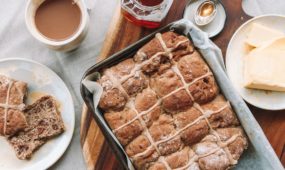 Raisin' the curtain on the not-so-humble hot cross bun

However, it may be that this is not the real reason either. In fact we may never know the true reason for Easter’s name primarily due to its antiquity; going back, as it does, to the earliest versions of Old English. It’s very difficult to know for certain how any word, that has been in use for over a millennium, came to be.

But not knowing where a word comes from doesn’t undermine its significance. Whatever its origins, Easter gives us a chance to celebrate, for as we say on Easter Day – Alleluia! Christ is risen!