When you are a hopeful new member of the clergy, you begin to think about where, in the fulness of time, your first parish might be. You read the vacant parish profiles in the ‘Wednesday Weekly’ e-newsletter, and wonder about what it would be like to be the parish priest of the Parish of Somewhere. And one of the things you read in most of these profiles is how many people you can expect to find sitting in the pews of St Someone’s on Sundays, and how many dedicated Liturgical Assistants and support people you will have.

By the time you arrive in a new parish, especially one in the country that has been empty for some time, the parish profile may be somewhat out of date. And, when you do arrive, you may find that what you read in the profile isn’t as important as you thought it would be.

Conventional wisdom suggests that the more people in the pews, the more the congregation does and the more they can contribute to the costs of running a parish. I arrived in a country parish, with congregations in five centres, to find that Biggenden, one with smaller numbers, has the most dedicated workers, the greatest involvement in the community, and the biggest income.

Biggenden nestles among the hills south of Childers and west of Maryborough, watched over by the spectacular Mt Walsh. Like many little towns it has lost people and businesses, and its churches and community groups are smaller than they used to be, but cattle sales are still a big part of its economy. 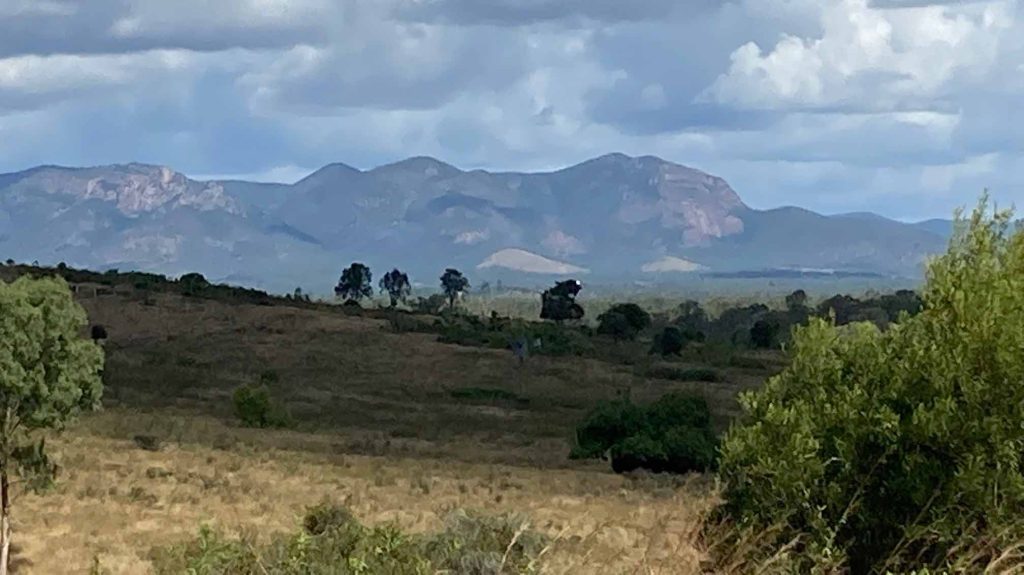 “Biggenden nestles among the hills south of Childers and west of Maryborough, watched over by the spectacular Mt Walsh” (The Rev’d Sue Barker)

The Ladies’ Guild of St John’s has been running the canteen at the Biggenden cattle saleyards for over 40 years. No one still involved is sure of the start date, but we added up a “best guestimate” based on which former parishioners (and in some cases, their mothers) worked the canteen and for how long. Small congregation numbers aren’t about to change the Guild’s commitment. The immediate past president of the Guild moved with her husband not long after I came to the parish to be nearer to family in Bundaberg. This would have reduced the Guild from three members to two, but a little thing like that wasn’t going to stop them. I joined the Guild – I’m a woman and a member of the parish, and able to make sandwiches, as well as being a priest, and the Guild still goes on.

Margaret, who is also the Guild treasurer, does the shopping – a more dedicated bargain-hunter I have never met. If there is a special on something needed for the canteen, in Biggenden, Childers or Bundaberg, Margaret will source it and snap it up. The canteen is small, with not enough storage, so Margaret’s bargains find their way to fridges and storage under her house. Her car boot is a work of art on a sale day, as everything is transported in its appointed box, esky and place – and then repacked and returned in the same perfect order. Do not attempt to rearrange the eskies!

Behind the scenes are more helpers who, even if they can’t manage a shift in the canteen, can still cook like angels. You would have to go far to find better a tomato relish than the one made by Cleon Thompson from St John’s for the canteen sandwiches. She also grates forests of carrots every month for the salad rolls. The home bakers faithfully produce sweet treats for every sale, including those must-haves at the canteen – home-made pikelets, scones and cupcakes (some with sprinkles, naturally, for those who still listen to their inner child), mixed sandwiches that have to be made just so, fat salad rolls and breakfasts for the early workers that barely fit on a plate. There was great consternation when plastic plates were outlawed, as the bamboo replacements were not considered big enough for the breakfasts the Guild likes to serve. 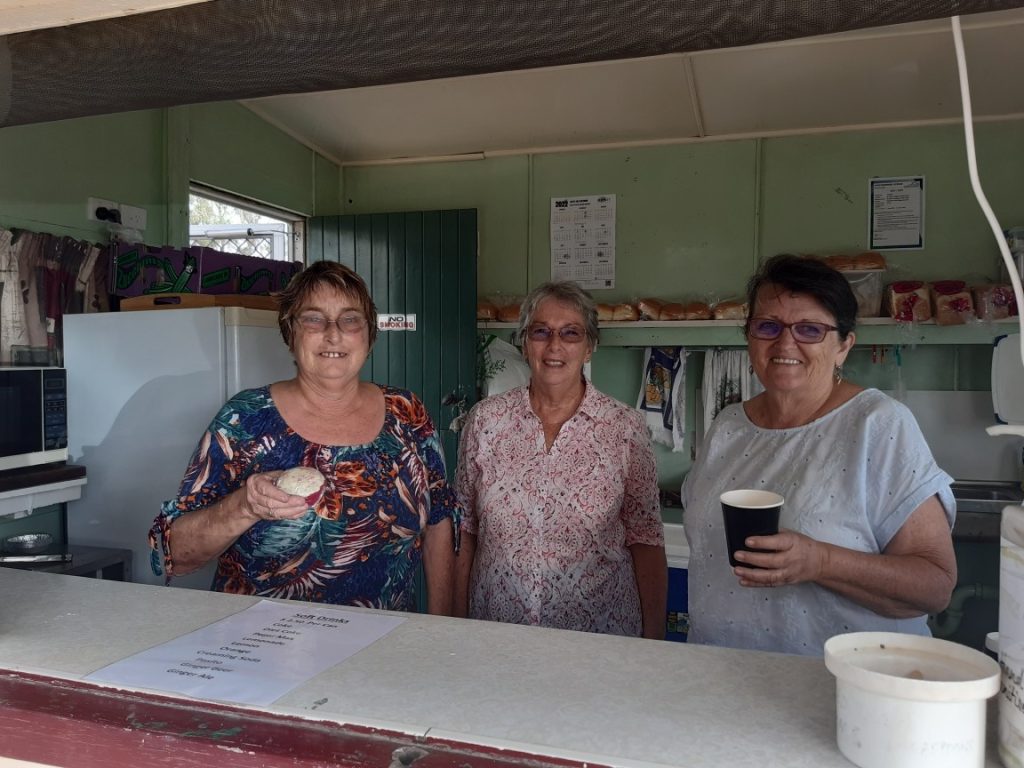 Margaret, Pam and Narelle from The Ladies’ Guild of St John’s, Biggenden serve in the cattle saleyards canteen: they are taking a breather and getting ready for the morning tea and lunch rush at one of the big sales, with 3,200 head of cattle expected, on 5 May 2022

Working in the canteen is rather like making tea for the congregation after a service. St John’s doesn’t have a church hall in which to do that, but we do have the canteen kitchen. Most of the volunteers, staff, sellers and buyers on any given day will know each other, or each other’s wife/husband/brother/sister/parents, and many people don’t just buy a cup of tea at the canteen, they stop for a catch-up. The canteen once made “real” tea, loose leaf in a pot, and according to the exacting specifications of a former Guild member. We have descended to tea bags these days, but that doesn’t seem to make the tea any less popular. 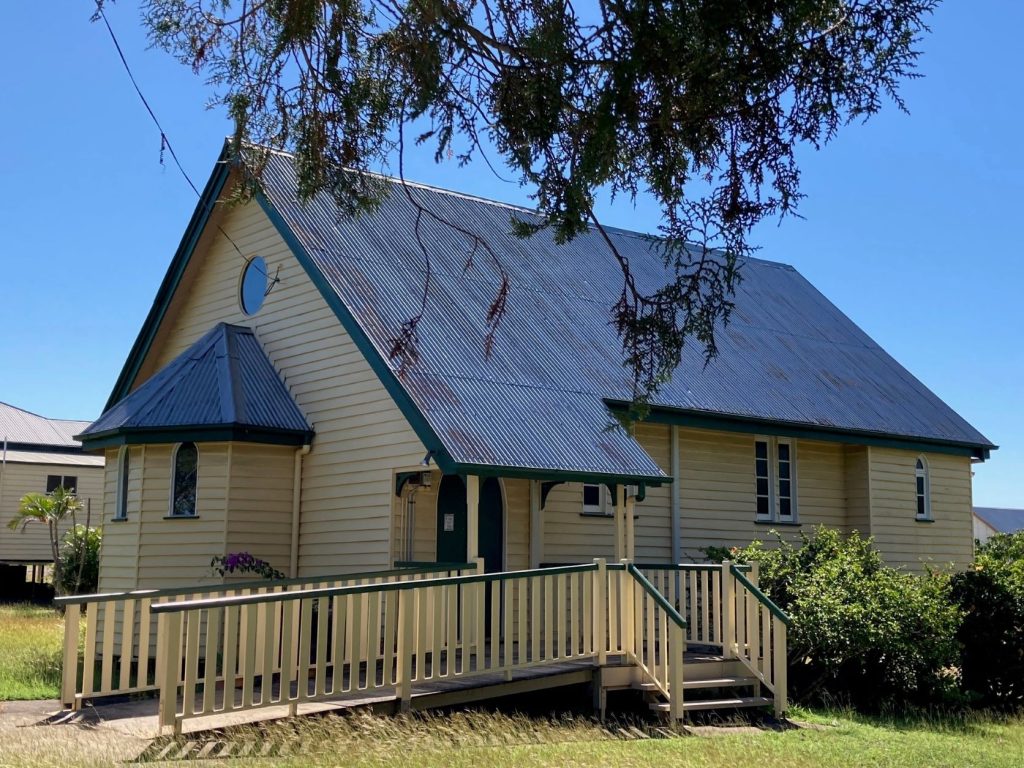 When parishes start to shrink, as many country parishes do, their social and outreach groups can dwindle and fold. But the Guild and the canteen keep running and keep serving. As Australian singer John Williamson would put it, we “tie it up with wire, just to keep the show on the road”. I don’t know what we, or the wider community, would do without the Ladies’ Guild. It’s been part of the saleyards and part of people’s lives and memories for so long. We’ll find a way to keep it going.