“A work of art which did not begin in emotion is not art.” Paul Cezanne

If you have been at St John’s for a while, you may recognise the face in the painting: the Director of Music, Graeme Morton. Graeme is an Australian composer and choral conductor with an impressive history.

During his career he has led many choirs, including the St Peters Chorale, the Brisbane Chamber Choir and The Australian Voices. For his significant contribution to youth music, Graeme has received the 2011 Lord Mayor’s Australia Day Cultural Award, the 2003 Prime Minister’s Medal and he is a Member of the Order of Australia. He is also the recipient of a Churchill Fellowship.

I am an art hobbyist, and one of Graeme’s former students from his time teaching music and conducting choirs at St Peters Lutheran College. I have many cherished memories of rehearsals and performances in the Cathedral from more than a decade ago. More recently, from the end of 2019 into 2020, I began a long-term art project, producing a series of portraits of inspiring people whom I have met – people who have contributed significantly to their local community.

I sought to produce a portrait work that would capture the spirit of someone distinguished in the arts or other aspects of Australian culture, and naturally thought of Graeme and his contribution to youth music. Having been one of his young students once, his teaching has greatly shaped my appreciation of art and culture.

I caught up with Graeme in late 2019 to discuss the project and interview him regarding his own personal musical legacy. He discussed with me his life-long journey through music, from the richness and fervour of church hymns in his childhood to his tertiary musical training and beyond. He talked to me about how we respond to music based on our early experiences, about the synergy of music and language, and about the importance of mystery in art and personality.

His experiences of music teaching in his youth were limited compared to the breadth of teaching that he has now provided to ensuing generations. I gained a sense of the passion and humble perseverance in his musical work, and a sense of the drawing together of people towards the beauty of music and its place in looking towards God’s holy presence. I saw the peace that Graeme had found in it. Music, as an art, is multi-dimensional – it has the ability to cross time, language and culture and change how we experience our lives.

After the interview, I reflected on my notes, and planned, and sketched. Graeme kindly allowed me to attend a number of rehearsals of the Cathedral choir with the canvas in tow. I would sit and paint while Graeme conducted the choir, listening so that I could embed the spirit of his musical direction into each brushstroke as the harmonies of the choir rose around me.

Over a number of months, including into the beginning of the COVID-19 pandemic, the work slowly came together – about 90x120cm, oil and acrylic on canvas. In it, you see Graeme steadily conducting, contemplative, pencil in hand as he often had. I chose to depict Graeme not dressed for performance but instead dressed to rehearse, moving with the music, because his background of dedicated, steady day-to-day work is where I see that his contribution truly lies.

Behind him the Millennium Window of the western wall of St John’s Cathedral shines. This is a major aspect of my memories of rehearsing in the Cathedral. I would be standing in the choir that was sometimes over a hundred choristers strong. We would be looking up as Graeme directed each piece, and looking beyond him to the Millennium Window. It would glow with the sun, and the last light of day would shine through it as the rehearsals continued into the evening. I could not help but include this, being such a striking aspect of the Cathedral.

I was told that it represented new life. In this painting, it radiates and centres Graeme’s work as a conductor. It represents passion, beauty and a holy power that is not just central to Graeme’s work, but represents the glory of God to which the music would often lead. Graeme stands peacefully within it, drawing from it, drawing to it; the depiction of the radiating window, contrasting with Graeme’s steadiness and peace, brings much of the dual emotional energy of the painting. 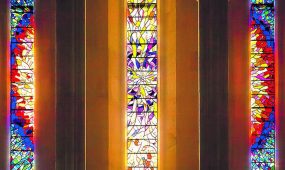 The result is as you can see. I hope that the viewer can look up, as I did, to feel the intensity, beauty and passion of the music that drove him, the God that oversaw him, the quiet humble diligence and perseverance that marked his every movement as he would draw together tens to hundreds of voices, while always standing alone.

“In music there is transcendence, there are healed and healing souls.”

Gloria in excelsis Deo: Come, o thousand voices, to me. 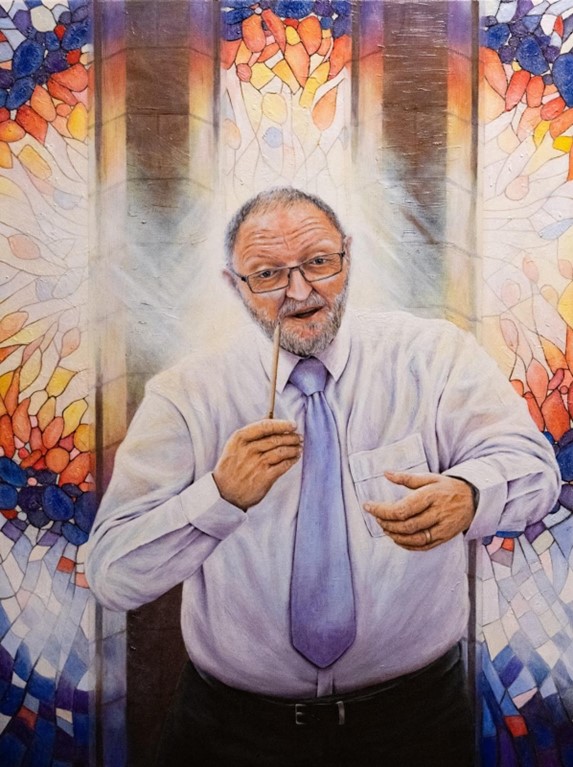 I would like to acknowledge the craftsperson and the designing artist behind the Millennium Window that inspired much of this painting. The real-life window was designed by artist Scott Maxwell. The stained-glass craftsperson was Warwick Blair, who sadly died from AIDS only weeks after the window was unveiled by the Queen in 2002.