Before I left Brisbane in late July for the once-in-a-decade Lambeth Conference of Bishops to volunteer as a steward, I made it known to pretty much everyone I spoke to that my main “mish” was to meet the Archbishop of Canterbury and shake his hand. Little did I know that this was to be more Mission Easily Do-able Daily than Mission Impossible. Archbishop Welby often ate lunch in the same room as the stewards, which we shared with the event planning team. He introduced himself to us on the first day and constantly came to thank us for the work we were doing. He is genuinely one of the nicest and most down-to-earth people I have ever met. 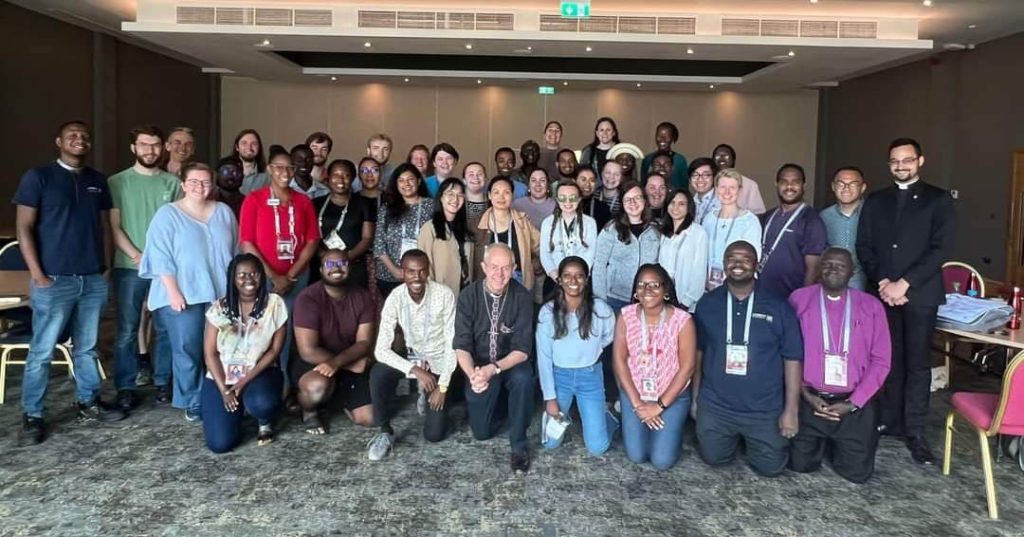 The Lambeth Conference was a very powerful uniting force for the stewards, as well as for the Bishops – it was really cool. Stewards hailed from more than 30 different countries, including from Panama, Madagascar, Pakistan, Sri Lanka, Australia, Myanmar, Zimbabwe, South Africa, South Sudan, Canada, the United States, and more.

We worked long days undertaking tasks like “way finding”, as it was called (a polite way of saying “herding”); checking-in delegates at all hours of the day and night; counting people into venues with a hand-held clicker; directing hundreds of people to boats with tickets (they just kept coming); setting up and packing down chairs and tables; opening up marquees for Morning Prayer at 6.30am; stationing fire exits; and, welcoming Bishops. 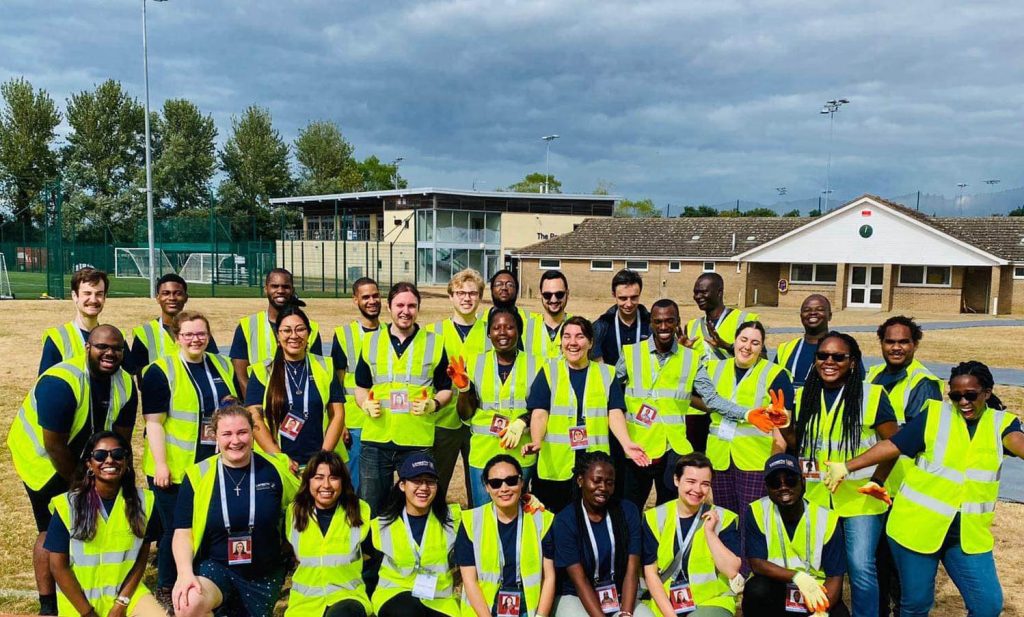 Community of The Way’s Aaron, Stacey and Eleanor with other Lambeth Conference stewards in July 2022

There were many amusing highlights.

One time I got stuck with four formally robed Bishops in a small revolving door enclosure in the main building at the University of Kent. The door required manual operation and because there were so many of us crammed in, we were stuck, unable to push the door. I was in front and so the only way we could move is if the Bishops gently pushed me, and so they did with much laughter all around.

I met a Guyanese Bishop and his wife at the bus drop-off early one morning and showed them to their rooms, carrying their luggage up the stairs. The Bishop’s wife had a “mum sense” happening and somehow knew that I was hungry and so she offered to take me to get food. I explained that I was on shift and couldn’t go. Her husband said, “In Guyana we have a saying, ‘An empty bag cannot stand’.” Every time I saw them during the two-week conference, they checked in on me to ensure I was eating regularly – it became a kind of an in-joke.

Some of the guest room windows were very hard to open and so I found myself unlatching and pushing them out for many Bishops. One contingent of Bishops “ordained” me the “Bishop of Window Opening”. A real Bishop – Bishop Cam – also assisted with this task by opening windows upon request with a small soup ladle. The UK was going through a heatwave at the time, with the mercury reaching 40 degrees on some days, and there was no air-conditioning – hence why our assistance was so appreciated.

The anglican focus editor asked the Southern Queenslanders to gather for at least one group shot during the conference. So in Canterbury Cathedral after the opening service, fellow Community of The Way stewards Stacey, Eleanor and myself helped to “way find” the four Bishops, their spouses and Saibai Elder Aunty Rose Elu. It was really special getting the photo taken together.

It took several hours for the official conference Bishops’ group shot to be taken. During this time, the Bishops’ spouses waited nearby under some tree cover. A large group of women spontaneously broke out in worship singing, which went on for about half an hour. They all sang in their own languages. The stewards, security team and staff were mesmerised – it was a goosebump thing to witness. 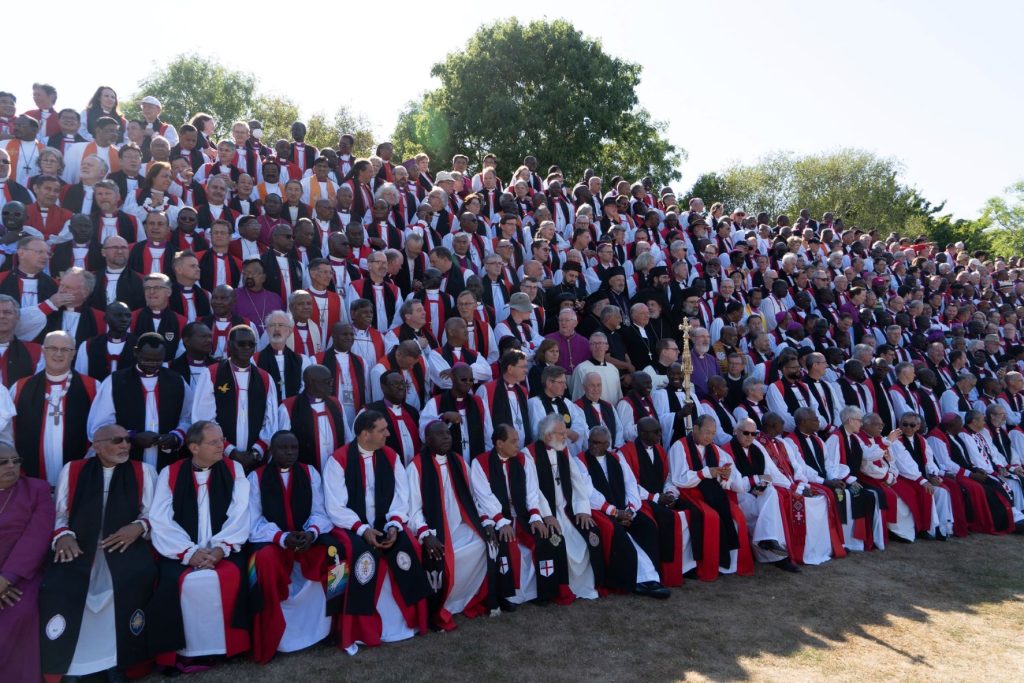 Every morning during the conference, stewards, Bishops and Bishops’ spouses danced at the back of the marquee to praise and worship music. It was such a joyful way to start the day.

The final song played at the conference was ‘Amazing Grace’. It was so beautiful to witness more than 600 people singing this iconic hymn. Even the bus drivers outside the venue joined in, which was really special. We stewards stopped what we were doing when the song started – we could feel an immediate shift, like something really special was happening. We had to pause and join in. 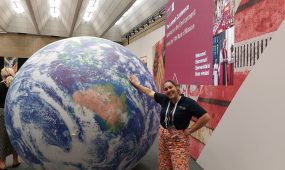 Dispatch from a Lambeth Conference steward

Towards the end of the conference, I was interviewed in front of more than 600 Bishops, their spouses and ecumenical guests on the stage by Archbishop Welby’s wife, Caroline Eaton, whom the stewards called “Mama Caroline”. She asked me three questions. The first was “Where are you from?” and when I replied “I live in Queensland”, I heard cheers from the back of the marquee, as all the Queensland Bishops erupted in support. Her second question was, “What has surprised you about the conference?” and so I described how inspired I was to meet Bishops who were constantly taking leaps of faith for their communities. Her third question was, “What is your main hope and prayer arising from the conference?” and I said that I hoped that the Church would be known for its love.

We three Community of The Way stewards felt really supported by the Queensland Bishops. The day before I was interviewed by Mama Caroline, Bishop Cam spontaneously approached me and, sitting next to me, said a prayer with me. He knew I was feeling nervous about the interview. His care meant a lot. 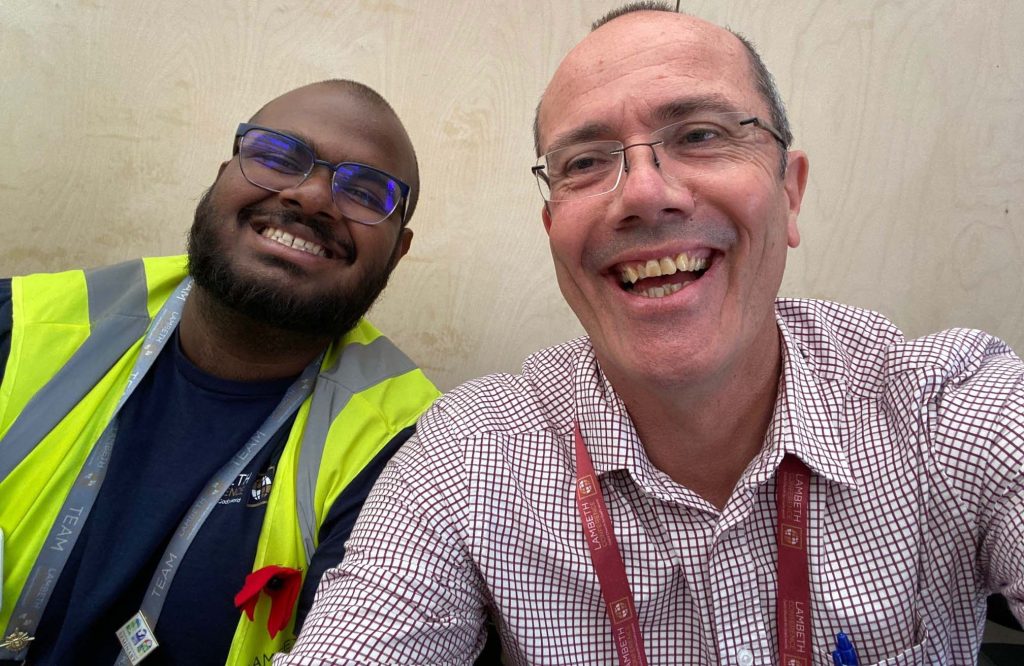 “The day before I was interviewed by Mama Caroline, Bishop Cam spontaneously approached me and, sitting next to me, said a prayer with me” (Aaron Vidya Sagar, pictured with Bishop Cam Venables at the Lambeth Conference in August 2022)

At the end of the conference the stewards had a day retreat, much of which was led by Archbishop Welby. He also presided over a service just for the stewards in the crypt of Canterbury Cathedral. I will always remember how beautiful it was to be part of a service that included every mother tongue of the stewarding team. It was truly special hearing my mother tongue, Tamil, spoken in a service that was presided over by the ceremonial head of the Anglican Church. In that moment, I really truly understood what it meant to be part of a global communion. It is a sense of unity I will take with me my entire life.

God really showed up at the Lambeth Conference – in the prayer, in the praise and worship, in the conversations and camaraderie and in the unity it fostered. I will always remember it as a high point of my faith journey.