‘Six degrees of separation’ is the notion that all people are a maximum of six social connections away from each other. In the Church, it is more like three.

It is a big world, but within the life of faith, unexpected connections are constantly being found.

One of the Church of England’s many theological colleges is on the outskirts of Oxford. Oxford itself sports three Anglican theological colleges which itself is noteworthy – it once had even more! The one that is on the outskirts of Oxford is in a small leafy village called Cuddesdon. The college’s name is Ripon College Cuddesdon. The Rev’d Max Lambourne from St Alban’s Church in Wilston, Brisbane, trained there, as too did this cleric.

Theological colleges are formative places. The older I get the more I realise what a gift the lectures were, and what a privilege it was to study, worship and live as part of a college community. I was at Cuddesdon for three years and then propelled into a curacy. Many of my fellow ordinands stayed in the south of England. I headed back north to The Diocese of Blackburn in Lancashire, where I spent four years as a curate in a suburban parish in Lancaster. In my Ann St, Brisbane office I have a photo taken during my curacy of a church full of people, young and old. I cannot remember the particular occasion, but it is a powerful reminder of my roots, for curacies are also formative.

So it came as something of a surprise to find a close connection between Cuddesdon, The Diocese of Blackburn and Northern Region Bishop Jeremy Greaves.

Bishop Jeremy’s grandfather, Walter Baddeley, was the Bishop of Blackburn from 1954 until his death in 1960. He trained at Cuddesdon, which is curious enough. He was also Bishop of Melanesia from 1932-1947. I was deaconed at Blackburn Cathedral (1993) – the same church that Baddeley had his seat. I was ordained by Alan Chesters, and it is quite possible that during my ordination he was using Baddeley’s crozier, which is still in that Diocese. 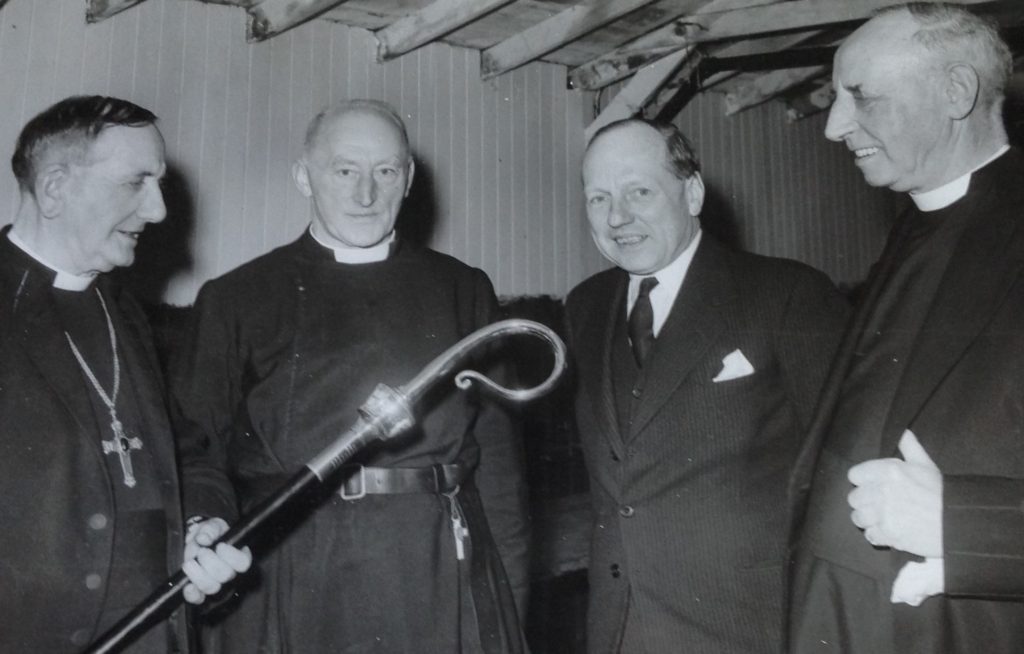 Walter Baddeley being presented with the crozier

But what really surprised me was to discover in an article of British journal New Directions how Bishop Walter had gently shaped the Diocese of Blackburn in his six-year episcopate. Lancashire had been the home of what was known as Lancashire Low (a low expression of Anglicanism), but under Baddeley and the appointment of clergy from Cuddesdon, the Diocese of Blackburn flourished in a broader direction. By the time I was there, in the mid-90s, Blackburn was a Diocese somewhat similar in outlook to the Anglican Church Southern Queensland’s. My curacy was served in a cheerful Liberal-Catholic church, yet just 10 minutes’ walk away was St Thomas’, an equally cheerful church but evangelical in orientation. One could go from one to the other without anxiety as Bishop Walter Baddeley had set The Diocese of Blackburn on that course. 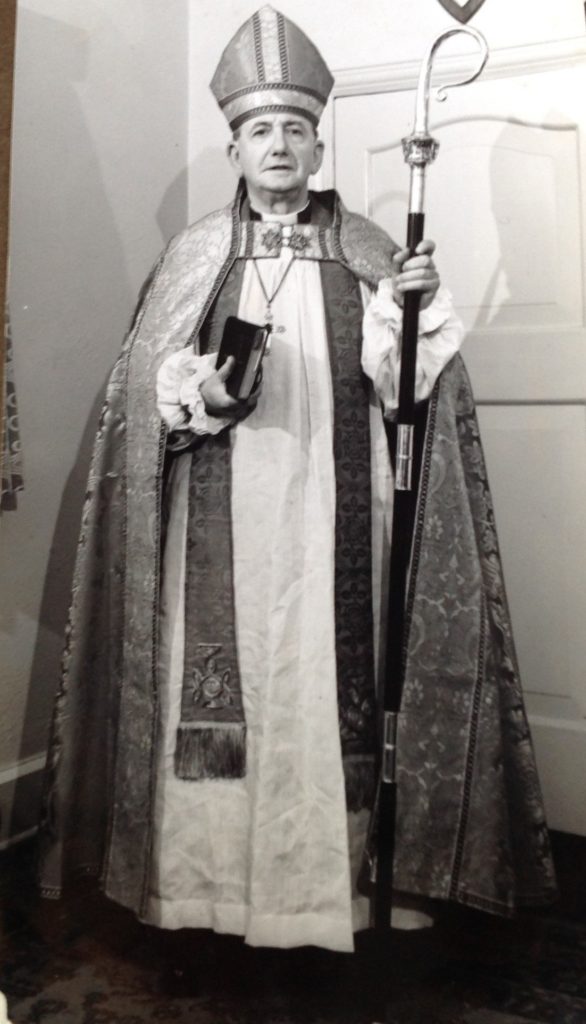 It is just a curiosity that I have a photo from my time in Blackburn in my office and in Bishop Jeremy’s office there is the document (a Royal Warrant) calling Baddeley to Blackburn. 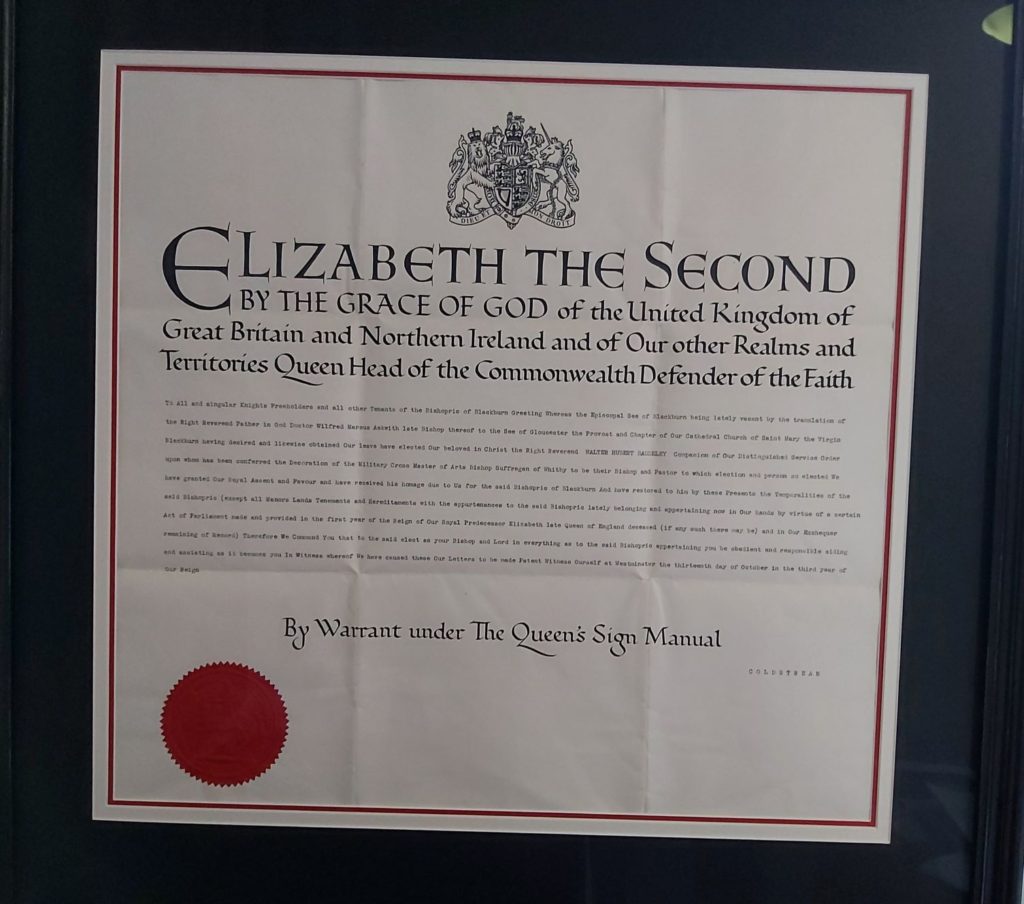 Beyond my surprise and curiosity, I feel tremendously grateful for the efforts of those I never knew in laying foundations for people they never knew. And, beyond that I am grateful that in the unique way of faith communities, Church lives crisscross and connections can be found.

I just wonder what Bishop Walter Baddeley would have thought of this cleric, who was trained at Cuddesdon and in Blackburn, working with his grandson Bishop in Brisbane.