A visit to Palestine – that was what led me to become involved in the Palestine Israel Ecumenical Network (PIEN). It was after participating in an APAN (Australia Palestine Advocacy Network) study tour in January 2015 that I decided to join PIEN and advocate for Palestinians, the Indigenous people of the land.

I had seen the illegal ‘separation wall’, erected by the Israeli authorities ostensibly for security reasons but really used to partition off Palestinian land and allow Israeli colonisers to build ever-expanding settlements. I saw soldiers escorting these Israeli ‘settlers’ through the Palestinian Old City of Hebron, people moving aside. I spoke with Palestinians, such as a family in Gaza who had been through so much in 2014, but who still reached out to us with hospitality.

PIEN is a network of Australian Christians and supporters seeking lasting peace for the people of Palestine and Israel, people of the ‘Holy Land’. A just peace will benefit both Palestinians and Israelis – those Palestinians who suffer daily human rights infringements, as well as the often-young Israeli men and women conscripted soldiers, who are caught up in the enforcement of unjust policies. Our Network was established by church leaders, Anglicans among them, in Canberra back in 2006, having a connection with the National Council of Churches in Australia. PIEN has steadily grown to be a national movement and became an Incorporated body in 2016.

Our activities include a regular email Update and the more comprehensive PIEN Quarterly which seek to keep those on our email list (over 600 subscribers) up to date on what is happening politically and personally with the Palestinian people. Key projects are also undertaken. We have a volunteer Committee and a part-time Executive Officer who works hard! Over the years, four Palestinian speakers have been brought to Australia and it is their voices that have been so important in bringing messages of lament and also of hope. Some of you may have listened to Bethlehem-based evangelical Christian Areej Masoud speaking at Anglican Church Southern Queensland events in 2018 and heard her call to see the humanity of the other. 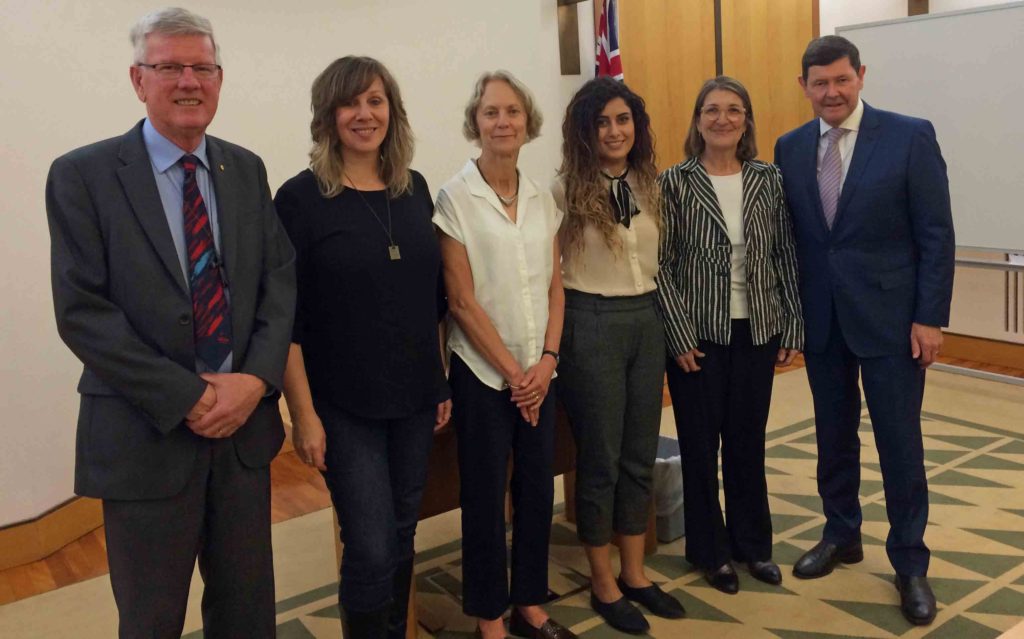 In 2018 I accompanied Palestinian evangelical Christian Areej Masoud to Parliament House in Canberra, where Areej met with the Parliamentary Joint Committee on Human Rights. This image was taken after the meeting, when Areej chatted with Committee members The Hon. Kevin Andrews (Liberal Party, standing far right) and The Hon. Maria Vamvakinou (Australian Labor Party, standing second from right), along with PIEN’s Gregor Henderson (far left), Nell Potter (second from left) and myself (third from left)

We are also committed to the global BDS Movement, a policy of boycott, divestment and sanctions which is a non-violent form of creative resistance similar to that implemented in South Africa’s apartheid era. Indeed, even Nelson Mandela said during a 1997 speech that, “We know too well that our freedom is incomplete without the freedom of the Palestinians.” In line with the United Nations, the BDS Movement supports: the end of the occupation of Palestinian lands and the dismantling of the ‘separation wall’ so Palestinians can move freely and safely in their own lands; the recognition of Arab-Palestinians living in Israel to full citizenship rights; and, the right of displaced Palestinians to return safely to their homes. 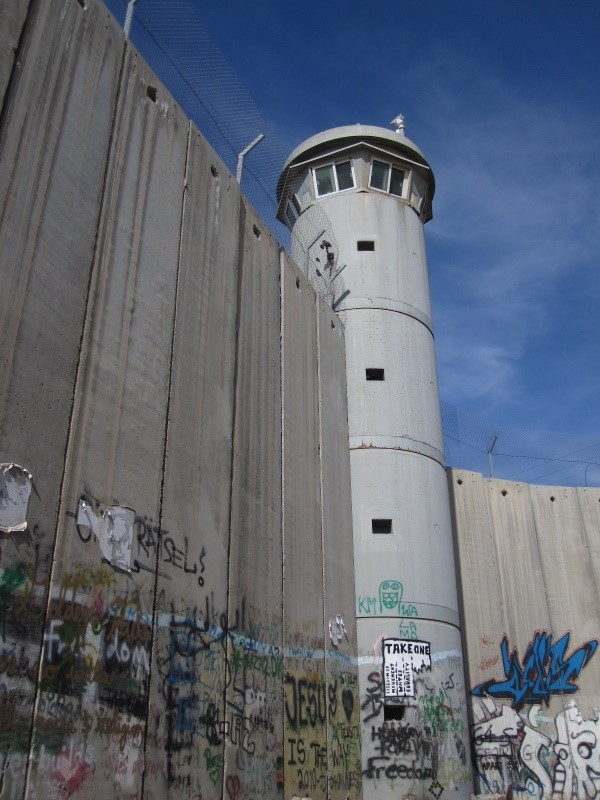 PIEN is a voice from the churches to the churches. Standing with and supporting Palestinian Christians are also important parts of our work and it is in this role that PIEN has embarked on its current campaign, bringing the ‘Cry for Hope’ message from ‘Kairos Palestine’, which represents Palestinian Christians of many denominations. In the context of the Israeli Government’s possible annexation of further West Bank Palestinian territory (in spite of recent diplomatic developments), we hear the cry for nations of the world to object to the ongoing takeover of Palestinian land and, significantly for Christians, we hear the cry that we call out “the use of the Bible by many to justify and support oppression.” This is a cry for hope to be still possible for Palestinians and their future. See the Cry for Hope website for more information.

My own church, St Saviour’s Anglican Cathedral in Goulburn, NSW, has become a sister church of St George’s Anglican Cathedral in East Jerusalem. We pray weekly in our services for the community there, led by Dean Hosam Naoum (soon-to-be-enthroned as the Anglican Archbishop of the extensive Episcopal Diocese of Jerusalem). We are concerned for the people of St George’s and the Holy Land in these COVID-19 times. 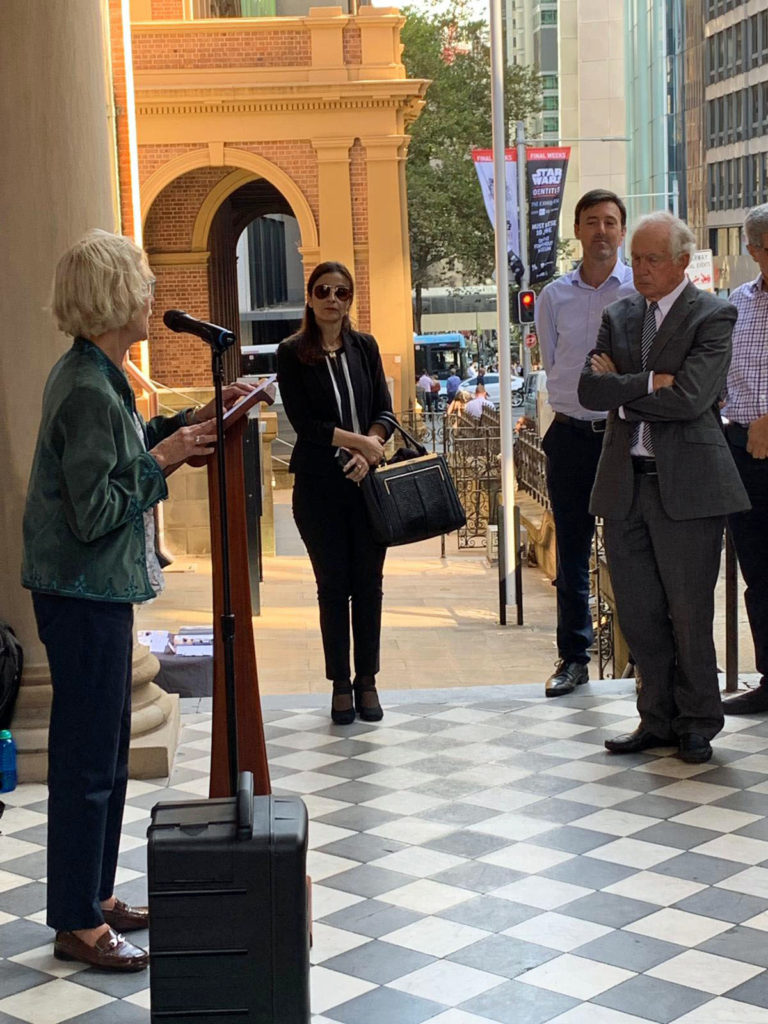 “PIEN is a voice from the churches to the churches” (PIEN President Helen Rainger announcing PIEN’s support of the BDS Movement at St James’ Anglican Church, King St, Sydney in April 2019)

I have affirmed the significance of travel to Palestine; however, my initial entry point to becoming more involved was my theological studies, specifically a master’s degree unit on Palestinian Theology in 2011. In the presentations which I have given in Anglican churches in my Diocese of Canberra-Goulburn, I like to begin with a question, ‘How political should a theology be?’ I have found that many Anglicans are shy of being seen as being ‘too political’, but as a member of General Synod, I also see that Anglicans are increasingly ready to become involved in political issues when we need to be.

On my second visit to Palestine, in 2017, and this time to Israel as well, including to Nazareth and Lake Galilee (as it is known locally), I attended a Sabeel Conference where I was updated on the current political situation and the ongoing suffering experienced by Palestinians. This trip also brought stories and images that will stay with me. I visited a family in their home in a refugee camp and heard about the number of children in the neighbourhood who had been arbitrarily taken from their homes the previous night by soldiers and put into detention. I also heard the story of the Tent of Nations – land owned, with long-time deeds, by a Palestinian Christian family, land which the Israeli Government seeks to take over.

Yet seeing the gentle hills surrounding Lake Galilee, I could picture Jesus teaching the people, “Blessed are the peacemakers.” 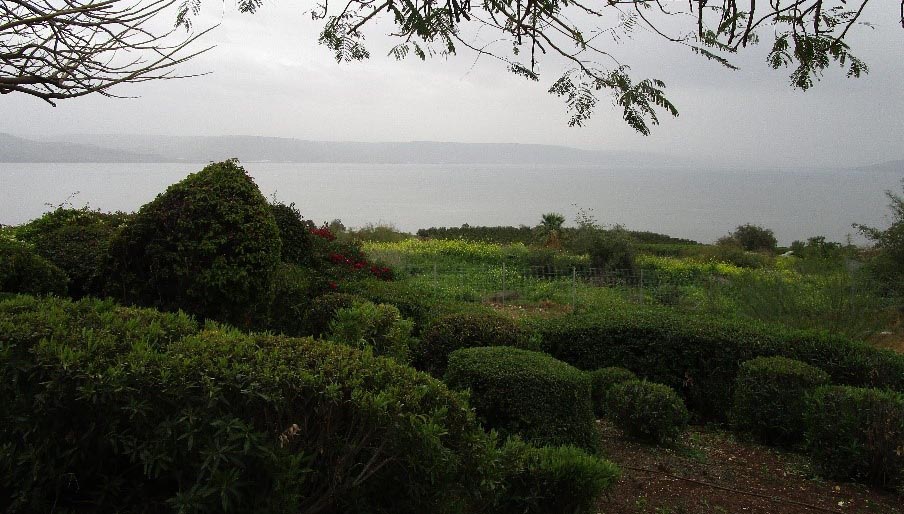 The Mount of Beatitudes

I will leave you at the little ‘teardrop church’, built where we are told Jesus looked over the valley to Jerusalem, and spoke his well-known cry for peace. 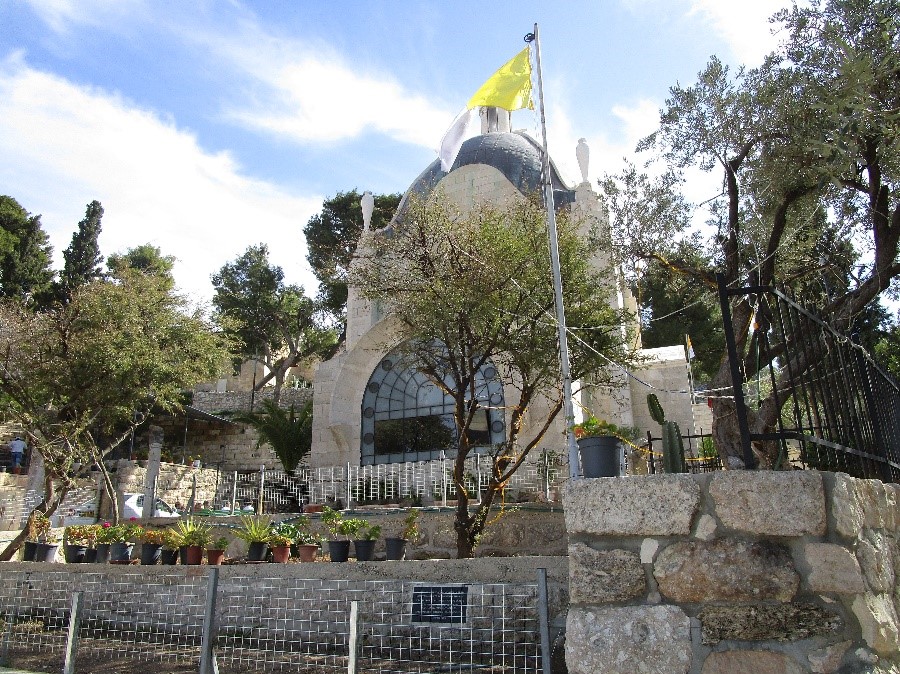 The teardrop-shaped church, symbolising the tears of Christ