In 2012 my husband Angelo Mancini and I moved from Auckland in Aotearoa New Zealand to Brisbane. We attended the Parish of Sandgate-Northpoint and I was a retired Permission to Officiate priest. In 2017 I started the first liturgy for the Tongan Anglican Worshipping Community at St Michael and All Angels’ Anglican Church, New Farm. This is a monthly Tongan service.

I translated into Tongan pages 119 to 129 and 141 to 144 of A Prayer Book for Australia 1995’s ‘The Second Order of The Holy Communion, Gathering in God’s Name’ service. This is the order of service that the Parish of Sandgate-Northpoint always used. It is different from A New Zealand Prayer Book / He Karakia Mihinare o Aotearoa (page 404) ‘Thanksgiving of the People of God’ that the Diocese of Polynesia translated our Tongan Prayer Book from.

It is so important for people to worship in their vernacular because worship and life are the same. They are God’s gifts. We worship in the language that God has gifted us. Language is not only important for worship, but also in our wider communities. Our ancestors started the language from the beginning to the present and it will be forever. It is key to our identities and heritage. The text at the bottom of the Tonga National Coat of Arms is translated as ‘God and Tonga are my inheritance’. When the service is said in the vernacular, people understand the service better and better spiritually experience the presence of God in their midst.

When I was a priest with the Diocese of Polynesia in Auckland, I found some of the new versions of the Tongan words used in the Liturgy were complicated for the younger generation to understand. So, my translation is based on the everyday language that Tongans use in their common conversation. The Tongan language includes three dialects: one for talking to the king, one for the nobles and one for the ‘commoners’. For example, the word ‘go’ for commoners is ‘alu, for nobles it is me’a and for the king it is ha’ele. I also used some of the Tongan Royal language for God. It is also important that Tongan theology is expressed in our community’s Liturgy. 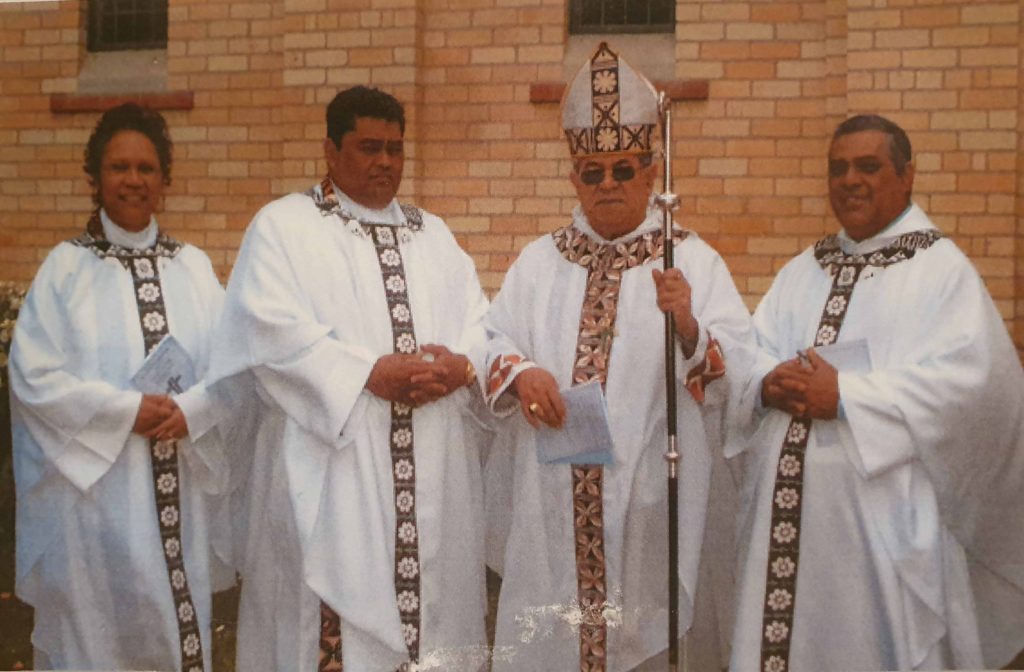 The Rev’d Eleanor Mancini was the first Tongan woman priest ordained in Auckland, pictured here with Archbishop Jabez Bryce of the Diocese of Polynesia in 2004

I asked permission from the parish priest of St Michael and All Angels’ Anglican Church, New Farm to have the Tongan service. It took me one month to finish the translation, which I then took to the printer to print copies ready for the opening of the first Tongan Holy Communion service. I gave a copy to my brother, The Most Rev’d Dr Winston Halapua, who was the Archbishop and Primate of the Diocese of Polynesia, when I visited Fiji in November 2016. He was very pleased to have it. 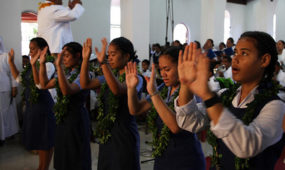 The Tongan Anglican Worshipping Community in New Farm expressed their appreciation for the simple translation. They said they remembered the time their parents used to worship together with my father, The Right Rev’d Fine Halapua who was the first Suffragan Bishop of Tonga in 1967.

The Rev’d Eleanor’s father, Bishop Fine Halapua, shaking hands with Prince Philip during the British royal visit to Tonga in 1967

I was surprised when a Tongan Methodist church leader said, “All other Tongan church denominations already started in Brisbane, except Anglican. The circle is now completed with the opening of the Tongan Anglican Worshipping Community in New Farm.”

Download a copy of The Rev’d Eleanor Mancini’s Tongan translation of ‘The Second Order of The Holy Communion, Gathering in God’s Name’ service.