In 1961, the Diocese of North Queensland decided to commemorate a man who, though he had died 14 years earlier, loomed large in the Anglican community in that region. His name was Bishop John Oliver Feetham. He came to be known as ‘The Blessed’ John Oliver Feetham by those in the Diocese of North Queensland, and is commemorated on 15 September each year in A Prayer Book for Australia. His remarkable life and connection to our Diocese are certainly worth commemorating. 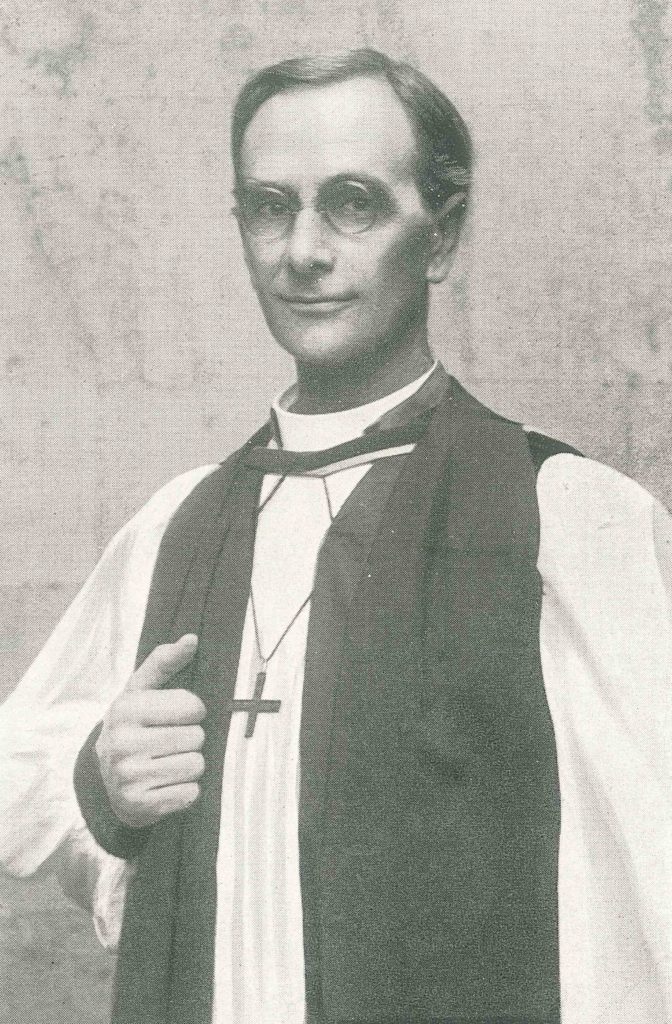 John Oliver Feetham was born in 1873 in Monmouthshire, Wales, in a little village called Penrose (Penrhos in Welsh). His father was a well-to-do Vicar of the local church and the young Feetham spent an idyllic Victorian youth being educated at Marlborough School before moving on to study Mathematics at Cambridge in the 1890s. Despite this privileged upbringing, he felt a calling to serve, and moved into the poor environs of cockney Bethnal Green in London. While there he decided to attend Wells Theological College and was eventually ordained to the priesthood in 1900. He returned to Bethnal Green and stayed there until 1907 when the lure of the Australian bush became too much to ignore.

Mention of The Rev’d JO Feetham coming to Dubbo to take on the leadership of the Brotherhood of the Good Shepherd, 11 May 1907 – Dubbo Dispatch and Wellington Independent (Image courtesy of TROVE)

Beginning with Brisbane’s own Bishop William Webber and seeking young priests to come to Gayndah to become members of a body called The Western Brotherhood, a forerunner of the Bush Brotherhoods throughout Australia, calls were constantly being made in England, particularly at Oxford and Cambridge Universities, as well as theological colleges, for newly ordained clergy to come and live an adventurous life in the Bush.

It was with a spirit of adventure that Feetham arrived in Dubbo to take over the fledgling Brotherhood of the Good Shepherd in 1907. He is said to have fallen in love with Australia very quickly, and seems to have adapted so successfully that only five years after arrival, The Rev’d JO Feetham, Bush Brother, was asked to travel to Townsville and become the fourth Bishop of North Queensland. 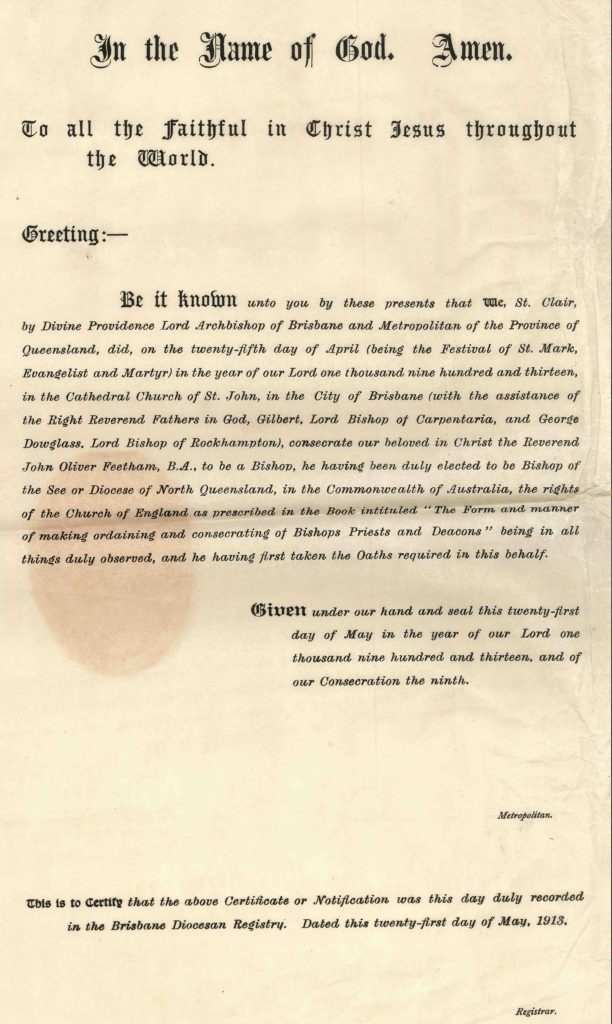 A copy of the consecration document of Bishop Feetham, to be signed by St Clair Donaldson as Metropolitan of the Province of Queensland and Archbishop of Brisbane (Image courtesy of the Records and Archives Centre, Anglican Church Southern Queensland) 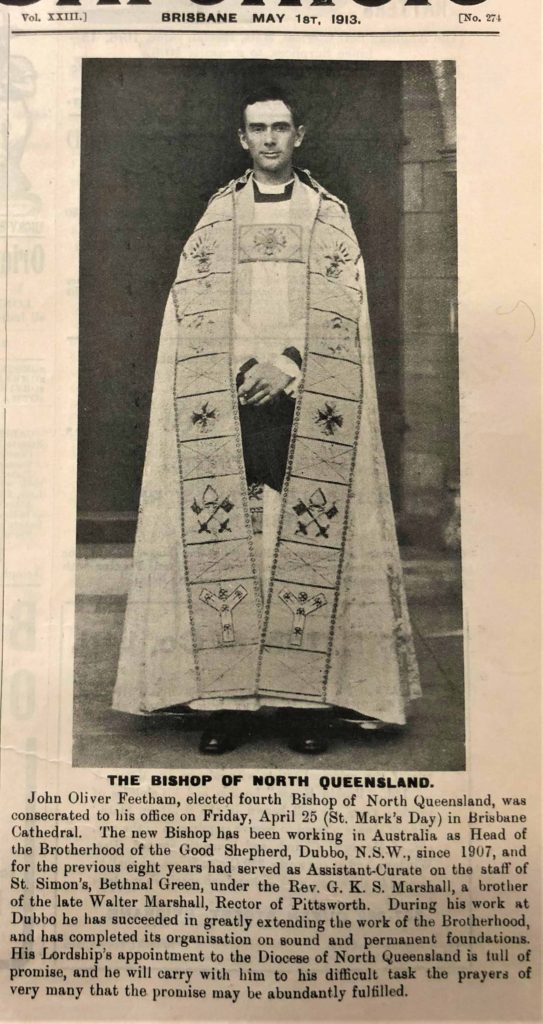 He remained as Bishop of North Queensland for the next 35 years. During that time he visited our Diocese frequently, beginning with his consecration by Archbishop St Clair Donaldson at St John’s Cathedral on 25 April 1913. The following month he was enthroned at St James’ Cathedral in Townsville.

Bishop Philip Strong of New Guinea, a future Archbishop of Brisbane, was a great friend of Feetham. Both were firmly of the Anglo-Catholic disposition, both devoted to the Church’s mission, body and soul, and both so energetic as to put many others to shame. When Archives staff were going through Archbishop Strong’s records, we found a picture of Bishop Feetham holding a pith helmet, hurrying to do something, when he visited then Bishop Strong at Dogura, New Guinea in 1940.

Indeed, Feetham seemed to revel in New Guinea. He even wrote a book of his adventures in 1916 when he visited as a young Bishop called From Samarai to Ambasi in the ‘Whitkirk’: An Account of a Visit to the New Guinea Mission in 1916. His immediate admiration for the people can be seen in the following passage:

“They use for worship the Wedauan language, to which their own is pretty closely related. To hear them pray is wonderful. The whole congregation says everything that is congregational, nobody misses a syllable; the sound is uttered so softly that it is like a murmur of the sea, a response is like the sympathetic echo on the strings of a harp.” (p.28) 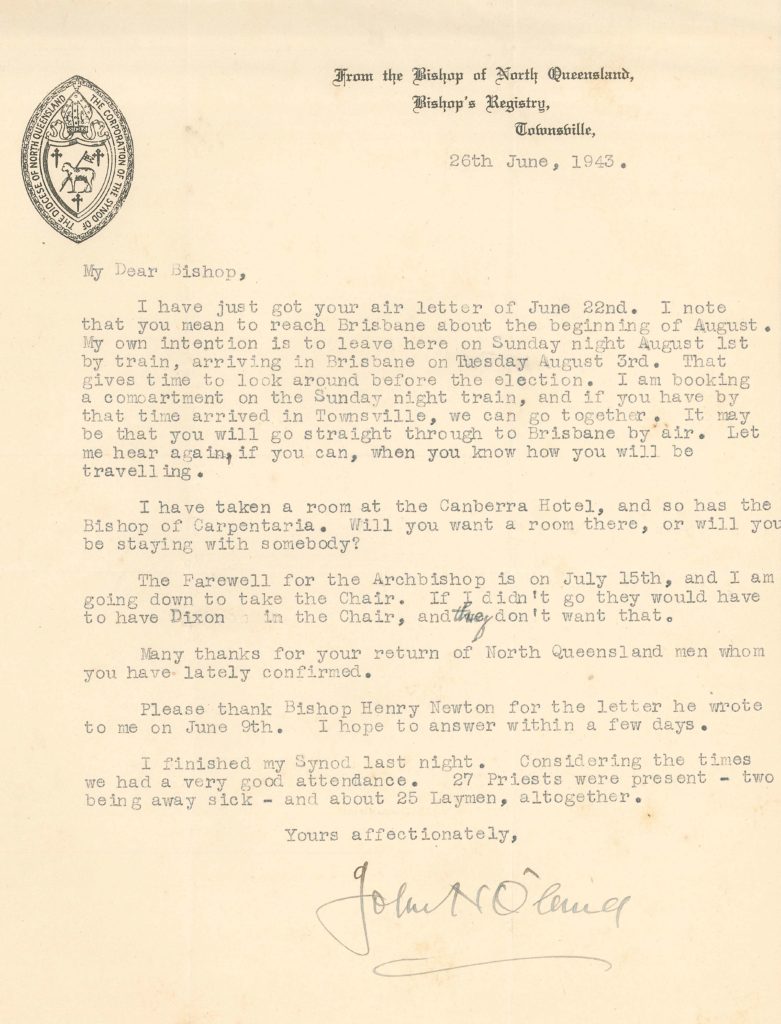 Letter from Bishop Feetham to Bishop Strong of New Guinea, discussing travelling to Brisbane for the election of a new Archbishop in 1943 (Image courtesy of the Records and Archives Centre, Anglican Church Southern Queensland) 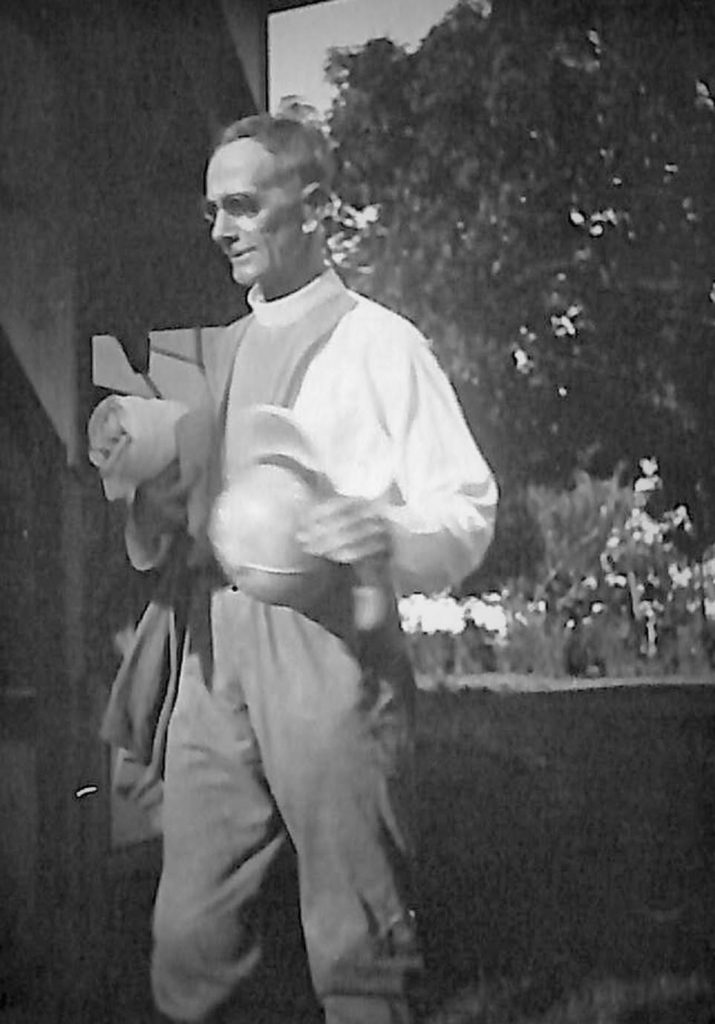 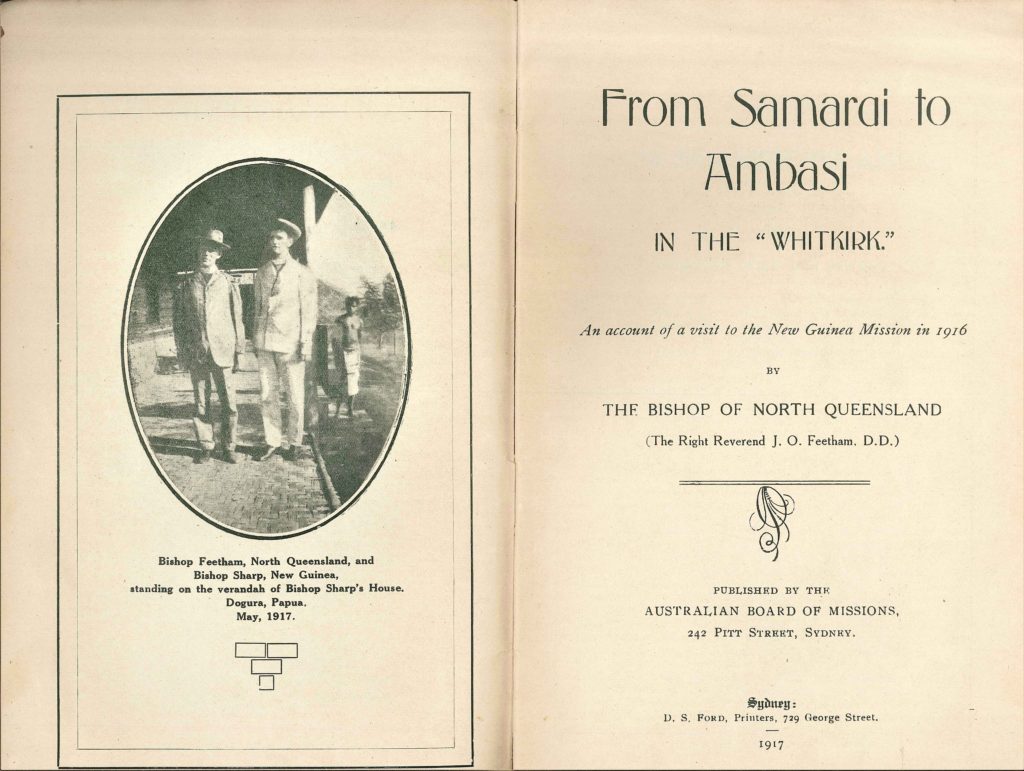 The front of the book that Bishop Feetham wrote about his time in New Guinea in 1916 (Image courtesy of the Records and Archives Centre, Anglican Church Southern Queensland)

Bishop Feetham, who never ceased being grateful for the education he received in England, made the setting up of schools one of his greatest priorities. He established numerous schools across North Queensland, many of which are still open today, including St Anne’s School in Townsville, now known as The Cathedral School of St Anne and St James’.

St Anne’s School serves as an example of the special relationship Feetham had with the Sisters of the Society of the Sacred Advent (SSA). He had initially appealed to English sisterhoods to come and staff the new school he had in mind, almost immediately after becoming Bishop of North Queensland. Yet none were able to make the trip over to Australia. So he turned his attention, and his hopes, to Brisbane and the SSA. After some negotiations Sisters Alice, Vernon, and Frances arrived in Townsville, by steamer, in mid-June 1917. The SSA retained their oversight of the school until 1978, and in 1972, a new library was opened and named in honour of Bishop Feetham. His admiration and devotion to the SSA, as well as to the Bush Brotherhood, signified his deep belief in the efficacy of the Religious in the life of a Diocese.

Bishop Feetham with the Bishop of London and some Sisters of the Society of the Sacred Advent in 1928 (Image found on the website of The Cathedral School of St Anne and St James, formerly St Anne’s, in Townsville)

During his time as Bishop, Feetham travelled widely, both throughout his own Diocese, the wider Province of Queensland, and overseas. He was present when the new St Francis Theological College, having relocated from Nundah to Milton, was opened in September 1938. As Bishop Webber did for our Diocese earlier, Feetham went to England on numerous occasions to seek funds for the Diocese of North Queensland and to try and recruit clergy who, like himself years before, were keen for the adventurous life in the tropics. Throughout these visits he showed the enthusiasm, charisma and eccentricities that endeared him to his flock, and others who were lucky enough to be his friend. 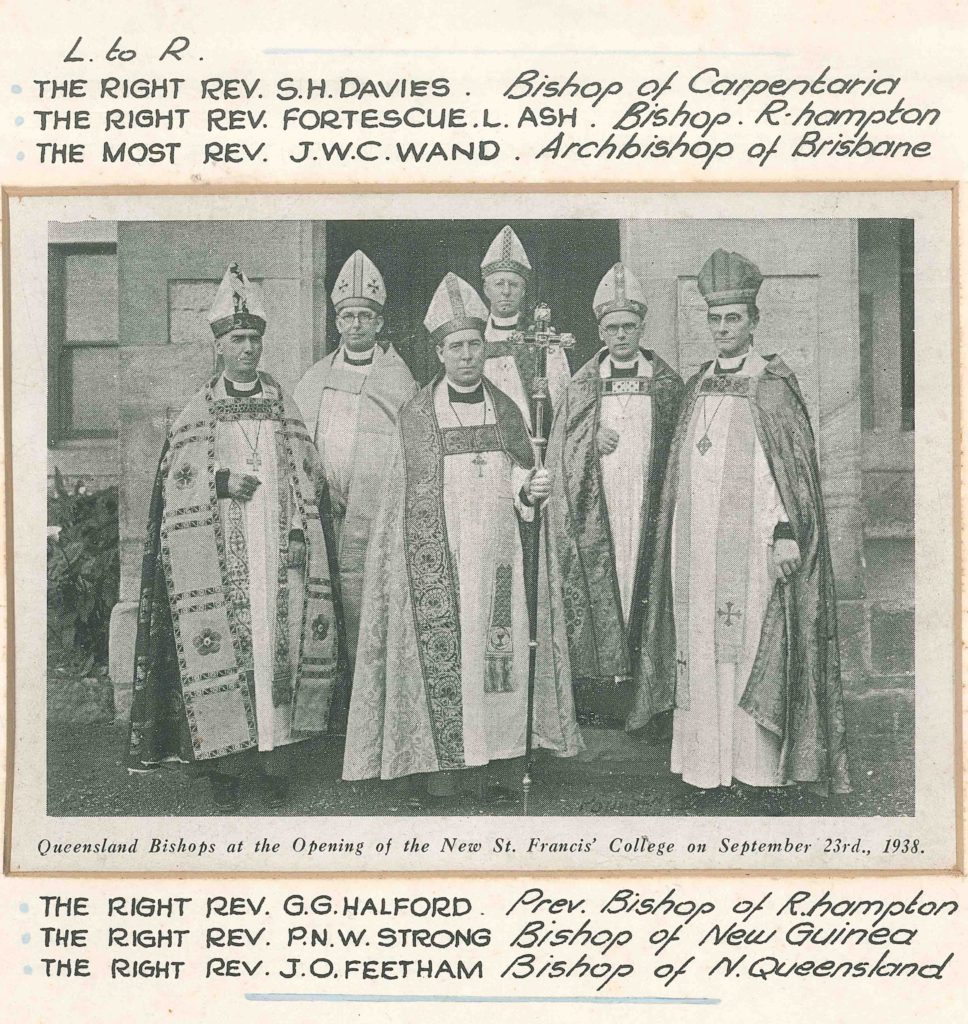 Bishop Feetham became known for some of these eccentricities almost as much as for the zeal and passion with which he led his clerical life. He was a tall thin man who, while always meticulously dressed in the correct vestments for his episcopal duties, wore, as his informal clothes, garments often too small for him. In the book John Oliver: North Queensland by The Rev’d James Norman, an entire chapter is devoted to these unique peccadillos.

Perhaps his most well-known trait was refusing to sleep in a bed. He slept outside, on the floor next to the bed, even, on occasion, on the top of the roof while he was still in Bethnal Green. Everywhere he went, he took with him copious amounts of blankets, clothes and camping equipment so he could set himself up wherever he needed to be. Even at Bishop’s Lodge he usually slept on the verandah. The Rev’d Norman also tells of Feetham’s hatred of mosquito nets. The problem, of course, was that Bishop’s Lodge was teeming with them, being in the sunny climes of Townsville. Sensitive to their bites and their noise, Bishop Feetham attempted to tackle the problem with his usual flare:

“For a time his protection was to wear for night attire, in addition to pyjamas, gauntlets and socks, a large towel wrapped right around his head, leaving only the nostrils exposed. ‘That is the way to beat them, Norman’, he said to me, ‘they can only get to the lower part of my nose, and mosquitoes abhor a draught.’ ” (John Oliver: North Queensland, 1948, p.228)

However great his eccentricities, they should not, and cannot, take away from the fundamental love and adulation that Bishop Feetham was given in North Queensland. When he died, on that verandah at Bishop’s Lodge, on 14 September 1947, an enormous outpouring of grief and tribute came forth. This reached as far afield as London where, on 3 October 1947, Bishop Feetham was commemorated during a requiem sung at St Paul’s Cathedral. The preacher was The Bishop of London, William Wand, former Archbishop of Brisbane.

“It would be safe to say and one could say it without any fear of contradiction, that there is no single individual to whom North Queensland owes more. Feetham poured into it his abundant energy, his private means, his health, everything in fact that he was, or had. He was sustained by an unqualified certainty of the great possibilities of the country, by a real admiration for its people, and above all by a profound faith in God and in the Church in which he served.” 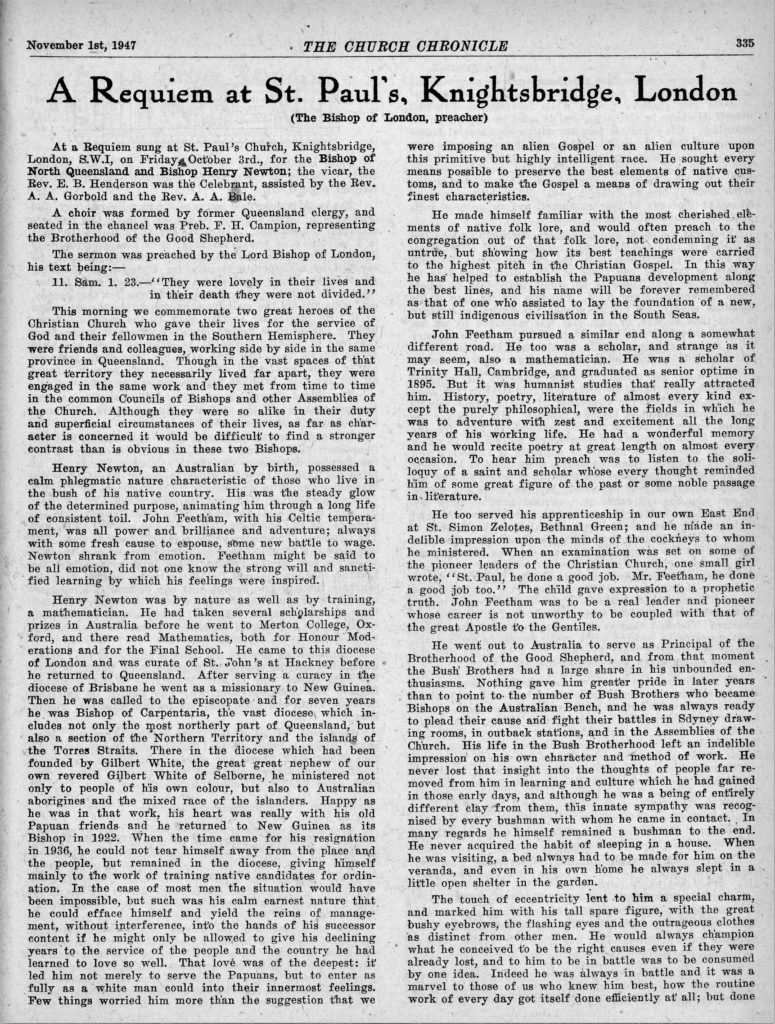 Reproduction in the November 1947 issue of The Church Chronicle of the sermon given by Bishop of London William Wand during a requiem for Bishop Feetham at St Paul’s Cathedral London, 3 October 1947 (Image courtesy of the Records and Archives Centre, Anglican Church Southern Queensland)

The Diocese of North Queensland was determined to commemorate Feetham in a meaningful way, and appointed a commission, in 1960, to consider how best to do that. At the 1961 Synod it was moved “That John Oliver North Queensland be numbered among the Saints and Heroes of the Anglican Communion.” This was carried. It was also determined that this commemoration could only be inaugurated in the Cathedral Church of Northern Queensland and during Synod. And so, as reported in The Northern Churchman on 1 July 1962:

“In his beloved Cathedral in Townsville, on June 3rd [1962], at the annual Diocesan Synod, the name of John Oliver Feetham, Bishop of North Queensland from 1913 until 1947, was formally included in the Church Calendar so that he might be remembered annually, in the Diocese, as a ‘saint and hero of the Christian Church within the Anglican Communion’. The annual Commemoration will be on September 15th.”

In 1967, here at St John’s Cathedral Brisbane, Bishop Feetham was permanently commemorated via a carving in the canopies of the Choir Stalls. On Palm Island, where he founded the Mission of St George, a large plaque and photo have been placed in the church. But his most profound commemorations are to be found, naturally, in North Queensland.

In St James’ Cathedral in Townsville the Bishop’s Throne and Choir Stalls are dedicated to him. On the verandah where he died at Bishop’s Lodge, a Memorial Chapel was established in the 1970s. In Cardwell North Queensland can be found the ‘John Oliver Feetham Pioneer Memorial Church’. Perhaps the greatest commemoration, however, was the act of placing Bishop Feetham’s ashes underneath the altar of St James’ Cathedral on 24 September 1947. 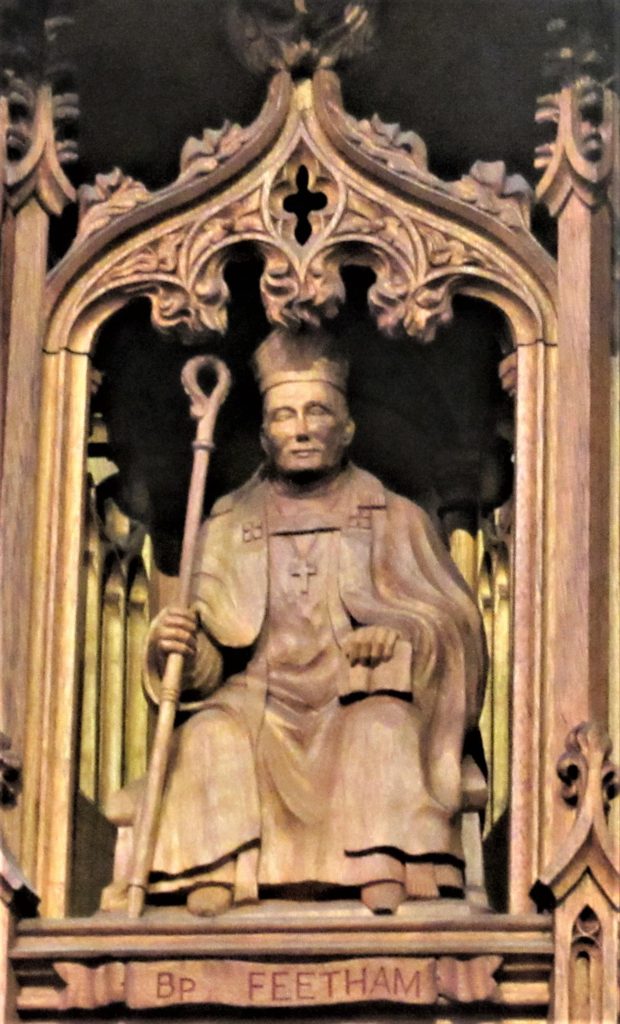 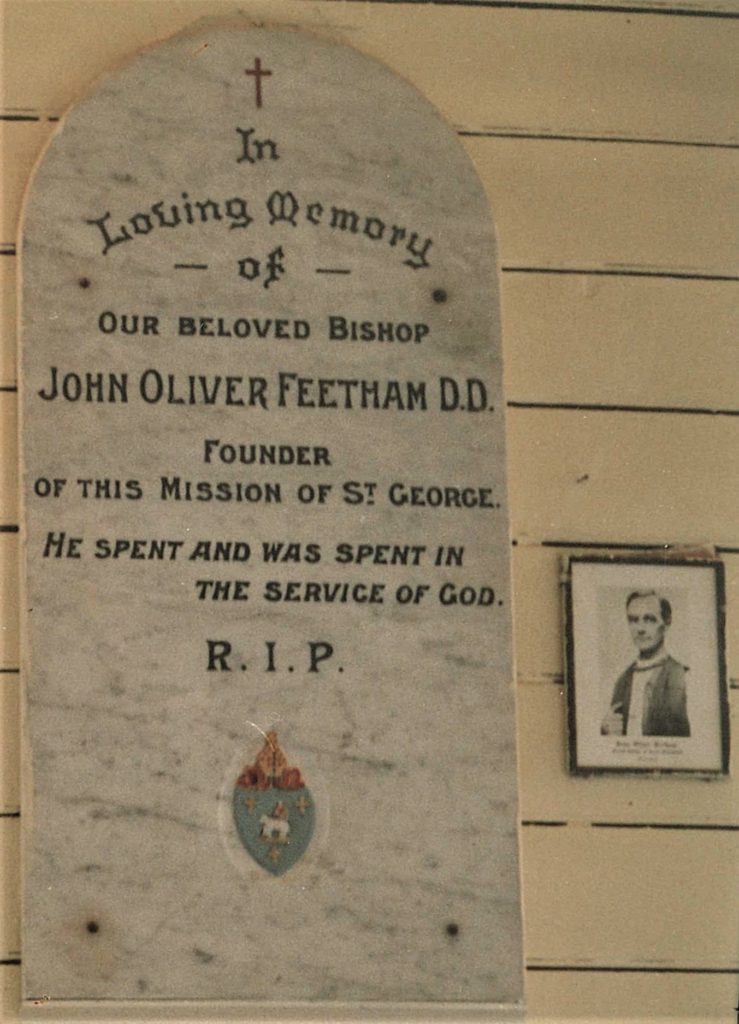 The plaque that commemorates Bishop Feetham in the church on Palm Island (Image courtesy of the Records and Archives Centre, Anglican Church Southern Queensland) 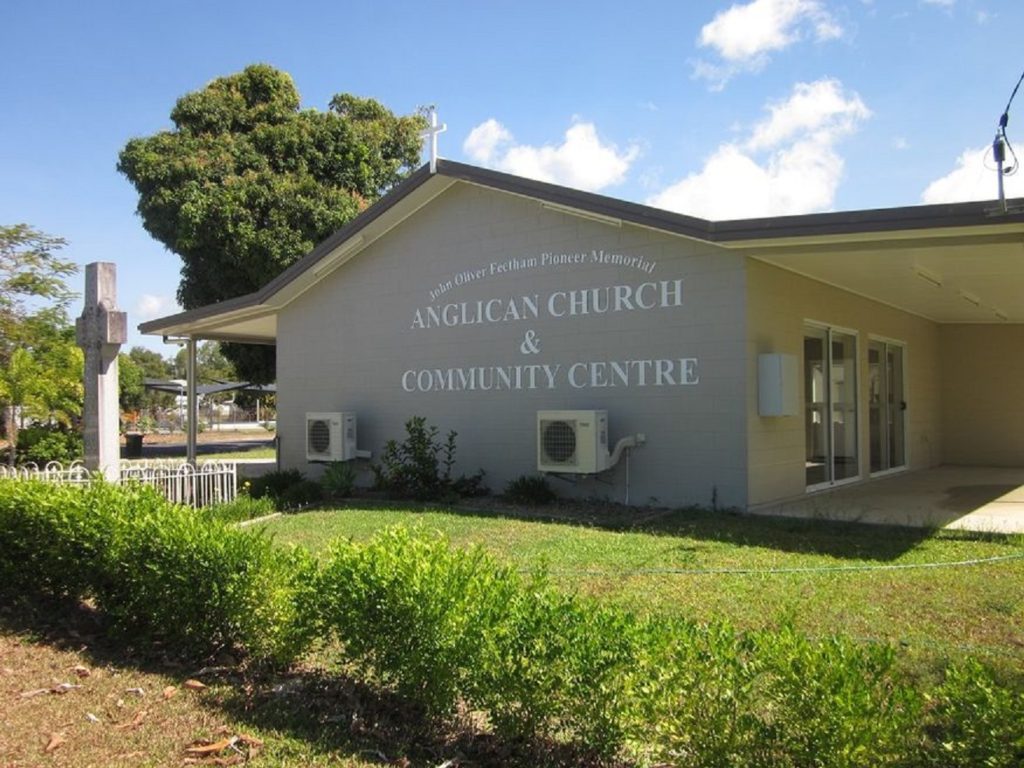 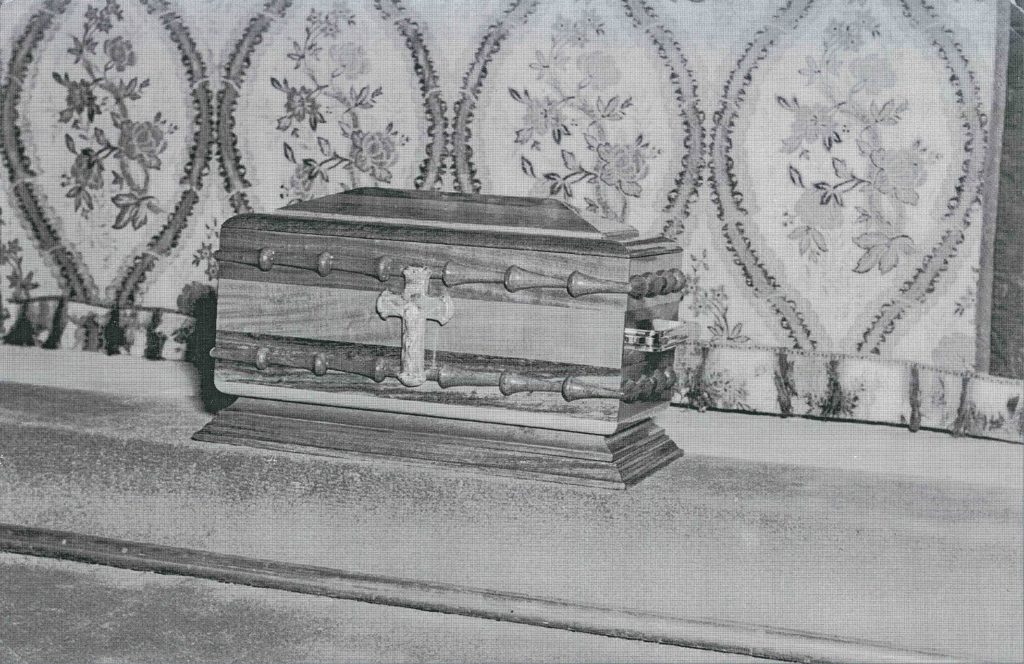 Bishop John Oliver Feetham’s ashes before being placed underneath the altar at St James’ Cathedral in September 1947 (Image courtesy of the Records and Archives Centre, Anglican Church Southern Queensland)

The impact that Bishop John Oliver Feetham had on the Diocese of North Queensland cannot be understated. He is colloquially called ‘The Blessed’ there because of his yearly commemoration and the ongoing reverence the Diocese has for this eccentric, enthusiastic, gifted and profoundly devout priest. His connection to Brisbane, where he was first consecrated as Bishop, and where a carved image of him will reside for years to come, must surely be celebrated as a small part of an extraordinary story.