“But how many did you get at your service – the church would be pretty empty, wouldn’t it?” It was with great joy that I enthusiastically answered, “We were chock-a-block, pretty well close to capacity!”

This exchange was part of a recent conversation with a priest friend that I suggest is fairly typical of conversations between parish priests who know each other reasonably well. “How are you going…?” and “What’s it like in your part of the world…?” and “How are your, um, numbers?” are questions we encouragingly ask each other. My friend in this case is a parish priest of a suburban Brisbane church and we were talking about Church in the bush generally and bush church buildings specifically.

For the sake of transparency, I then qualified my answer a little. I told him it is the smallest church I have ever ministered in, in a ministry that has included quite a few very small churches. Smaller even than All Souls’, Morven, but equally beautiful, it has around six double rows of very short pews and every second row had been roped off due to COVID-19 physical distancing requirements. So, there were around two people per every second pew, apart from a couple of families who squeezed in three. And, it was Easter Sunday, so we had around 20 gathered. It was a truly wonderful service with critical mass reached.

The church I’m talking about is St Paul’s, Umbiram. Now, Umbiram is not a town or even a village. St Paul’s is the only building in Umbiram, on an acre of land surrounded by just-harvested fields of barley in the Toowoomba Region. To get to St Paul’s, Umbiram from Brisbane, you roll over the last foothills of the Great Divide into the fertile faming land of the inner southern Darling Downs. Umbiram is a community – a genuine community church that has functioned not only as a church since 1906, but also as a meeting place for the whole community. The sole building in Umbiram, it is the only place for people in the area to gather. 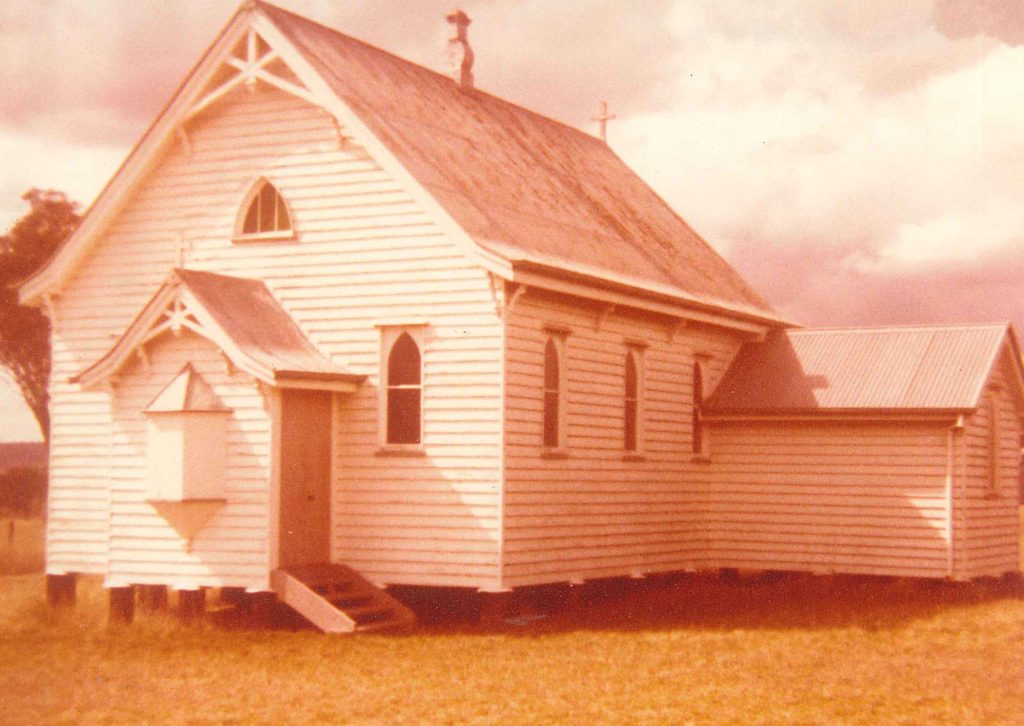 These thoughts came to mind as we have just received our batch of Australian Anglican Church Calendars for 2022, featuring a fine collection of church buildings. Some are large, some are smaller, but all are quite grand in their own way.

St Paul’s, too, is quite grand in its own way. It was built in 1906 at a cost of 225 pounds. The timber was brought across country from Umbiram railway siding, all on one wagon pulled by eight horses, with no road then at all. It was literally built in the middle of nowhere in under two months on the border of two properties, Harrow and Westbrook Stations, each forgoing a small slice of their land for the Glory of God. I think that is grand.

The first service was performed by the Archdeacon of Toowoomba, The Ven. AR Rivers on behalf of the Archbishop of Brisbane, The Most Rev’d St Clair Donaldson, who formally dedicated the church to the glory of God when he visited two months later in November 1906. 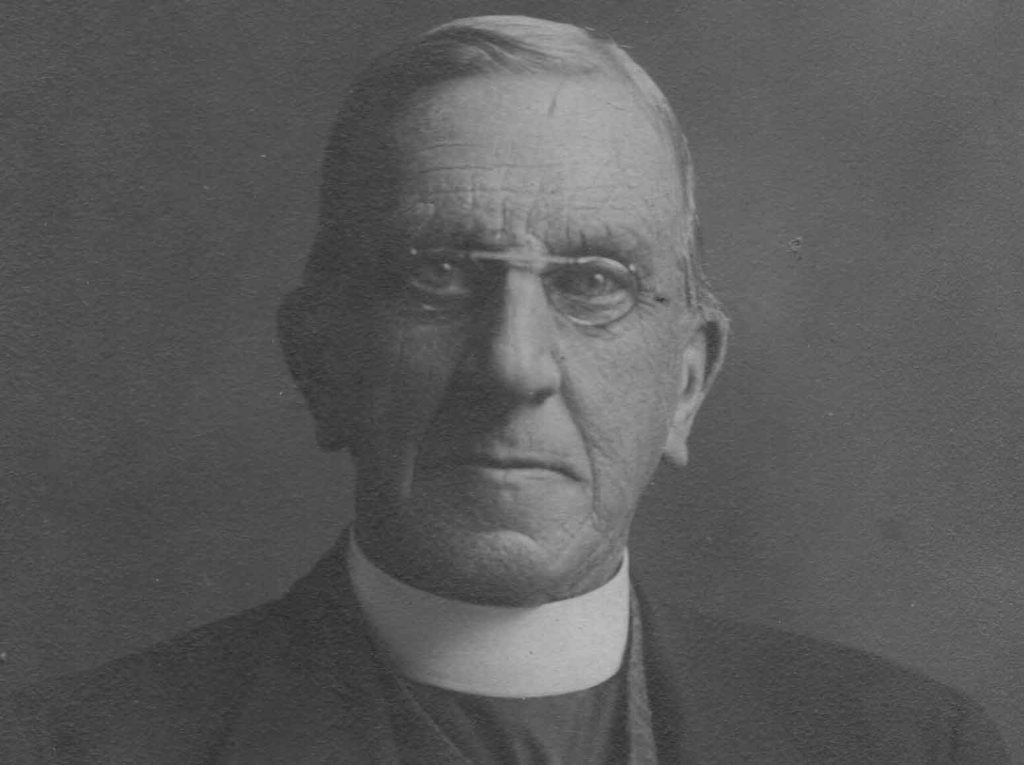 The Ven. Arthur Richard Rivers – Archdeacon of Toowoomba from 1905 to April 1920. Photo believed to have been taken just before his appointment as Dean Of St David’s Cathedral, Hobart in 1920 (Image courtesy of the Records and Archives Centre, ACSQ) 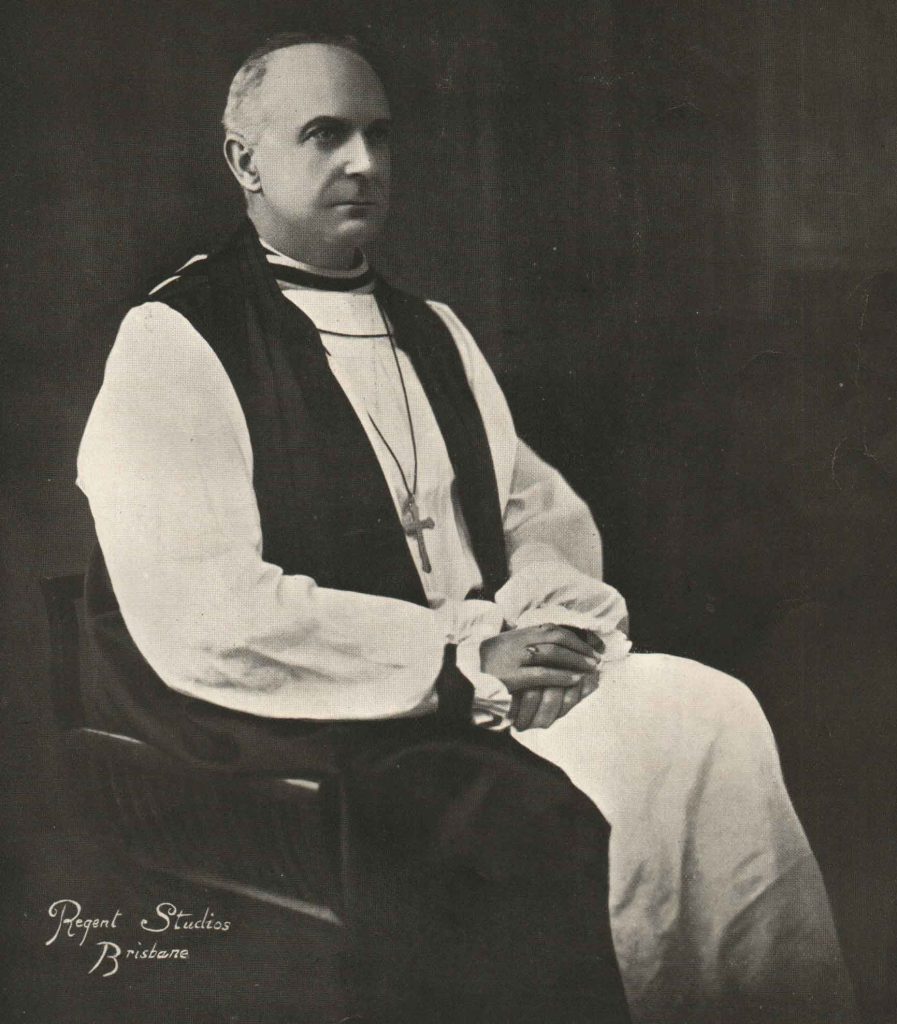 St Paul’s has neither water nor electricity, yet it has been the centre of the community for over one hundred years. In 1960, a ‘shellite’ pressure lighting system was installed.  This is a grand name for three gas lights hanging from the high ceiling. I know these things because the congregation members are the descendants of faithful Anglicans who were married, baptised and buried in this old place, and they told me. I think that, too, is grand.

As with all these small country churches, they are filled with faithful, hospitable people who really take their time after church, and we would love you to visit. We meet together on the first Sunday of each month at 10.30am. Just find the Wyreema-Athol dirt road and look for a solitary beautiful church surrounded by fields of barley.

All over our Diocese there are churches and congregations just like St Paul’s, many of them supported by the Bush Ministry Fund (BMF) in some way. There are myriad ways to give to the Church, and I would strongly commend the BMF to you, and ask you to consider making them your parish’s primary mission focus in 2022. 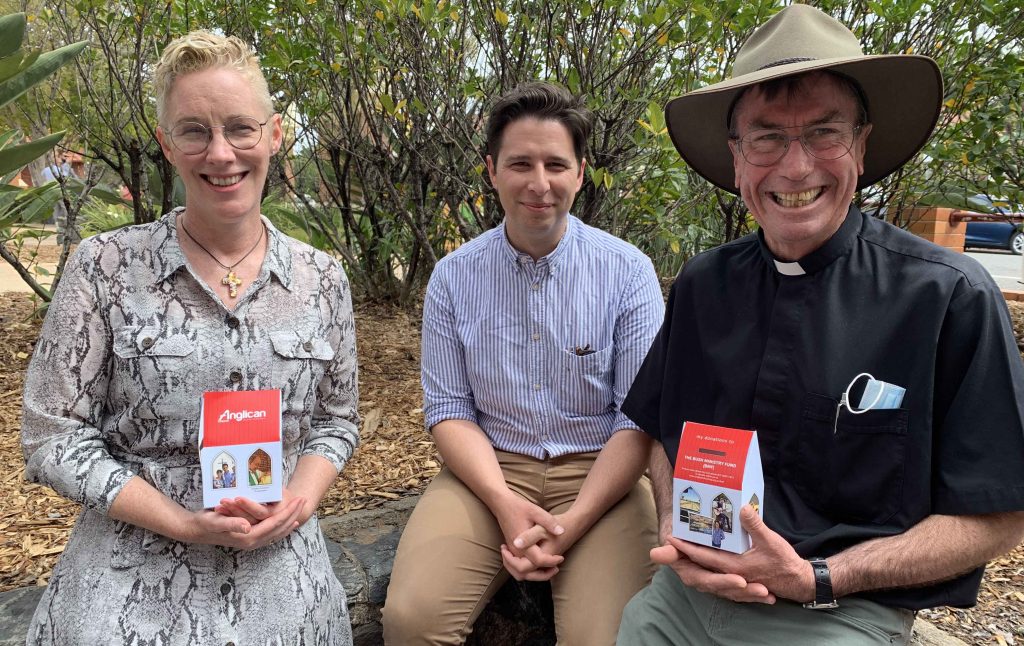 Some of the Bush Ministry Fund clergy with BMF money boxes: The Ven. Lizzie Gaitskell, The Rev’d Matthew Skelton and The Rev’d Rick Gummow at Synod in September 2021