Homelessness is a sad reality for thousands of young people in Southern Queensland who find themselves living on the streets.

At just 16 years old, Cherice had been kicked out of home, having to move in with her other parent, who was later incarcerated. Despite juggling two jobs and school, she simply couldn’t afford the rent.

Cherice went to Anglicare’s Nathanael House in Mount Gravatt for emergency accommodation where she described the experience as daunting.

“We sat down together to eat meals, something I’d not done before,” Cherice said.

Cherice was able to continue working her two jobs, and focus on finishing her schooling, all while battling mental health challenges, something very common for young people accessing Anglicare services.

“At times, I didn’t know whether I’d get through it. But I’m a pretty task focused person, so with some help from the team at Anglicare, and my school reconnect worker, I just kept putting one foot in front of the other.”

It was during this time that she was inspired to work in mental health and help people through their own mental health journey. Cherice returned to Bart’s Place to take up the role of lead tenant, helping other tenants and communicating with staff to ensure the house ran well.

After nine years of volunteering with Anglicare Southern Queensland, Cherice and her dog Sophie left Bart’s Place to live independently.

Qualifying as an enrolled nurse, Cherice went on to work at a mental health hospital. She is now a qualified registered nurse, and is working as a surgical nurse at a major SEQ hospital.

“Shift work as a nurse in the current environment is no easy task. But then, Cherice has proved that she thrives in a challenge,” Mr Maddren said.

“We are so proud of what she has achieved and we’re very grateful to have been part of her journey.

“More than 40% of Queensland’s homeless are under the age of 25. We provide early intervention, crisis accommodation, and housing support to combat youth homelessness and help people build a happier and healthier lives off the streets. 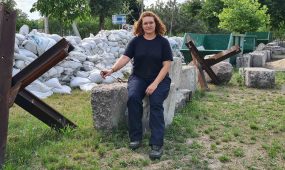 “Many young people can experience tumultuous and uncertain upbringings as well as mental illness, family breakdown, social inequality, and youth unemployment which can all sadly lead to homelessness.

“Homelessness Week runs from 1 to 7 August and encourages action to resolve homelessness in Australia.

“We believe that with the right support network, every young person can get on the right path to reach their full potential. Early intervention, and support services like Anglicare Southern Queensland are critical,” he said.

First published on the Anglicare Southern Queensland website on 4 August 2022.