I love waking early, lying in bed and hearing the birds in the garden and, when I can get away camping, hearing the morning chorus. It makes a great start to the day. On my daily walk in the late afternoon I often hear the birds, insects and frogs marking the end of the day. These experiences help connect me to nature. Whether I am in suburbia or in the bush – it is the same voice of creation that I hear.

Some years ago while serving in Argentina, I remember being in the diocesan retreat centre in the hills of Córdoba Province. The centre was in an elevated rural setting away from city lights. So the whole night sky was a carpet of stars brighter than I have ever experienced elsewhere. The heavens declared the glory of God. It was truly awesome!

However, the voice of creation “speaks” to us in other ways. It speaks to us during devastating fires, droughts and floods and through our polluted oceans, such as in the voices of suffering animals and people.

“The burning bush is the Symbol for the Season of Creation 2022. Today, the prevalence of unnatural fires is a sign of the devastating effects that climate change has on the most vulnerable of our planet. Creation cries out as forests crackle, animals flee, and people are forced to migrate due to the fires of injustice. 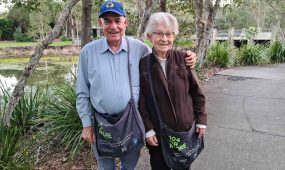 On the contrary, the fire that called to Moses as he tended the flock on Mt. Horeb did not consume or destroy the bush. This flame of the Spirit revealed God’s presence. This holy fire affirmed that God heard the cries of all who suffered and promised to be with us as we followed in faith to our deliverance from injustice.”

I continue to be constructively challenged by other voices of creation I hear, including the scientific voices and those whom the media tells us are impacted. So I am motivated to reduce my own impact on creation.

My wife, Alison, and I built our retirement home in Sanctuary Pocket, a Forest Lake suburb with an environmental covenant. The covenant helps ensure that many trees are left on the blocks, so our home is surrounded by trees. Our home is energy efficient with solar hot water and solar panels.

I also feel called to respond by educating myself and informing others on steps they can take. For example, Angligreen, an environmental group that aims “to strive to safeguard the integrity of creation and sustain and renew the life of the Earth”, advocates from within our Diocese. We work ecumenically, and with other faith-based movements and secular environmental groups, to reduce our impact on the planet and to lobby elected representatives to urgently reduce our collective impact.

I pray that we all hear the voice of creation as we seek to work together to create safe and healthy communities and leave a legacy we can be proud of for our children and grandchildren.

Three ways you can participate in this year’s Season of Creation: