But as heartfelt and festive as the Christmas season may be, reality for people in Palestine today remains one of life under occupation.

“As Palestinians, we have an incredibly rich history, culture and heritage,” says Saleem Anfous who lives with his family – his wife Lubna and their three daughters – in Beit Sahour in the Bethlehem Governorate of Palestine.

“But despite all the joys of that heritage, we live under occupation, and this inevitably affects our identity as Palestinians too,” he says. 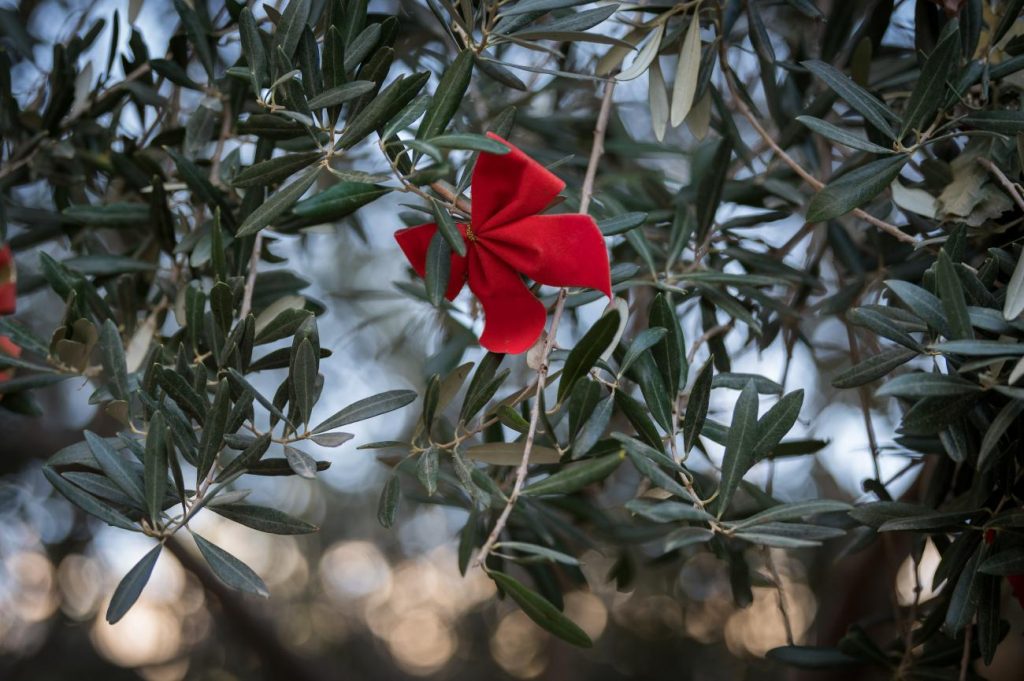 23 November 2022, Bethlehem, Palestine: Christmas decorations hang on the branch of a tree in a Bethlehem garden (Photo: Albin Hillert/WCC)

Rejoicing in Christmas as a family

Saleem and his wife Lubna rejoice in the fact that Christmas is approaching, as for the family, and the community in and around Bethlehem, it is a high-point of each year. 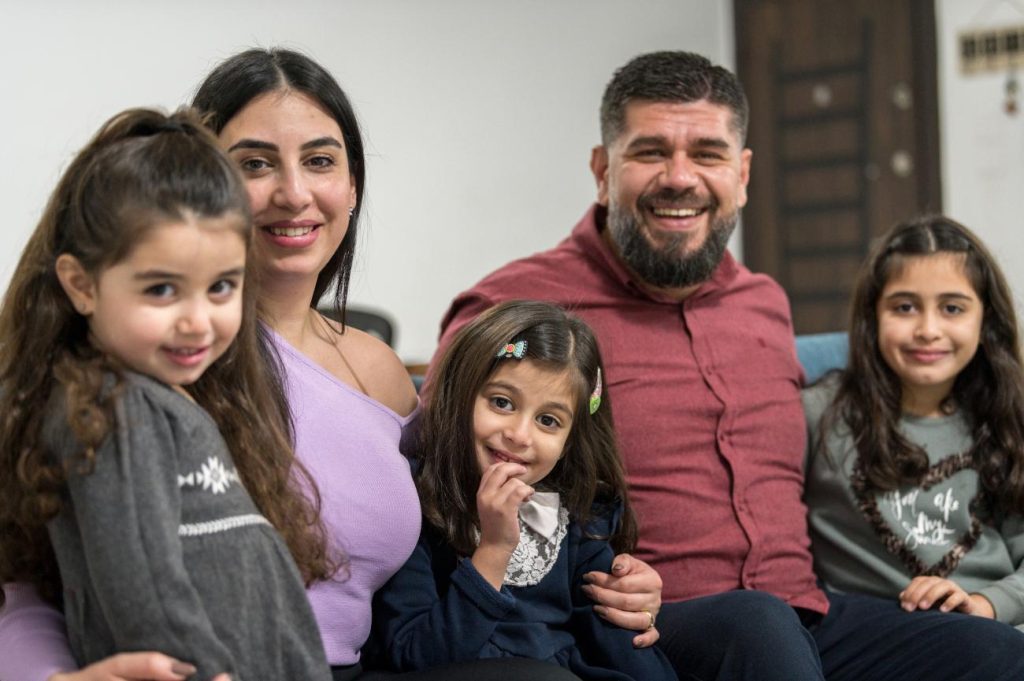 23 November 2022, Beit Sahour, Bethlehem, Palestine: The family of five pictured in their home in Beit Sahour, in the larger Bethlehem area: Lubna and Saleem Anfous (parents) and their daughters Celia (8) to the right, Salma (5) in the centre, and Liora (4) to the left (Photo: Albin Hillert/WCC)

“As parents with kids, we get excited when Christmas is here. There’s music everywhere, bazaars, festivals, all of Star Street turns into a Christmas market, and we go to all of these,” Saleem says. “And for the girls, when we get the Christmas tree in place and they help us decorate it, when they see boxes underneath, it’s all a bit crazy.”

The family’s oldest daughter, eight-year-old Celia, is already a bit of a Christmas veteran. At the age of three, she starred in a family video in which she recited parts of the Christmas story in different parts of Bethlehem, and each year she takes on the task of writing a letter to Santa to declare her Christmas wish list. This year, a table for doing make-up is at the top of the list. 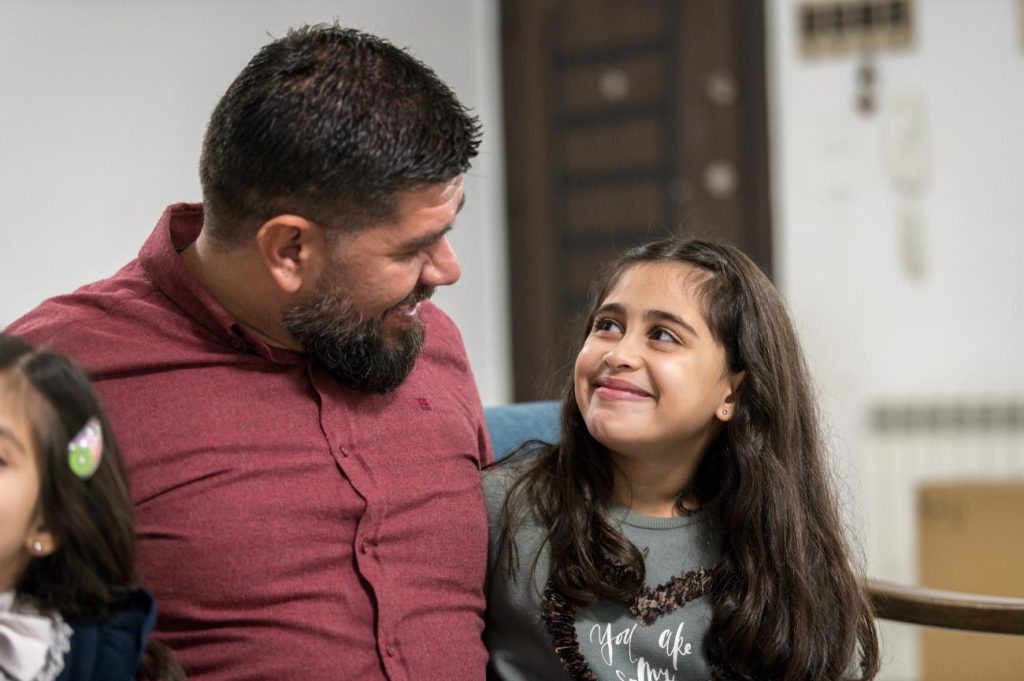 Celia’s mother Lubna reflects on the way memories of Christmas stay with you as a family. “You know, just seeing the eyes on our girls’ faces when they wake up in the morning on Christmas Day and think Santa has been there to visit during the night,” she says with a smile.

But Saleem and Lubna also talk of a larger community in Bethlehem that comes together to celebrate Christmas, how all of Manger Square fills to the brim with Palestinians in early December as they light the star at the top of the Christmas tree outside the Church of the Nativity, and also how Palestinians rejoice together across traditions. 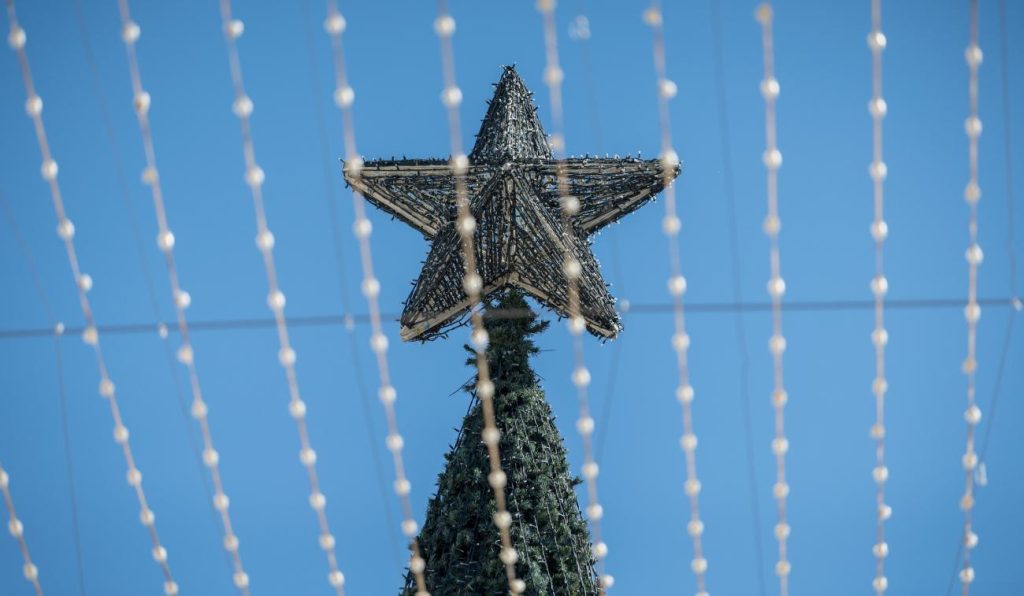 23 November 2022, Bethlehem, Palestine: Christmas decorations mounted on the Christmas tree at Manger Square, adjacent to the Church of the Nativity in Bethlehem (Photo: Albin Hillert/WCC)

“In Bethlehem, we celebrate Christmas not once, but three times,” the couple explains: in December for the western traditions and twice in January for the different Orthodox traditions. 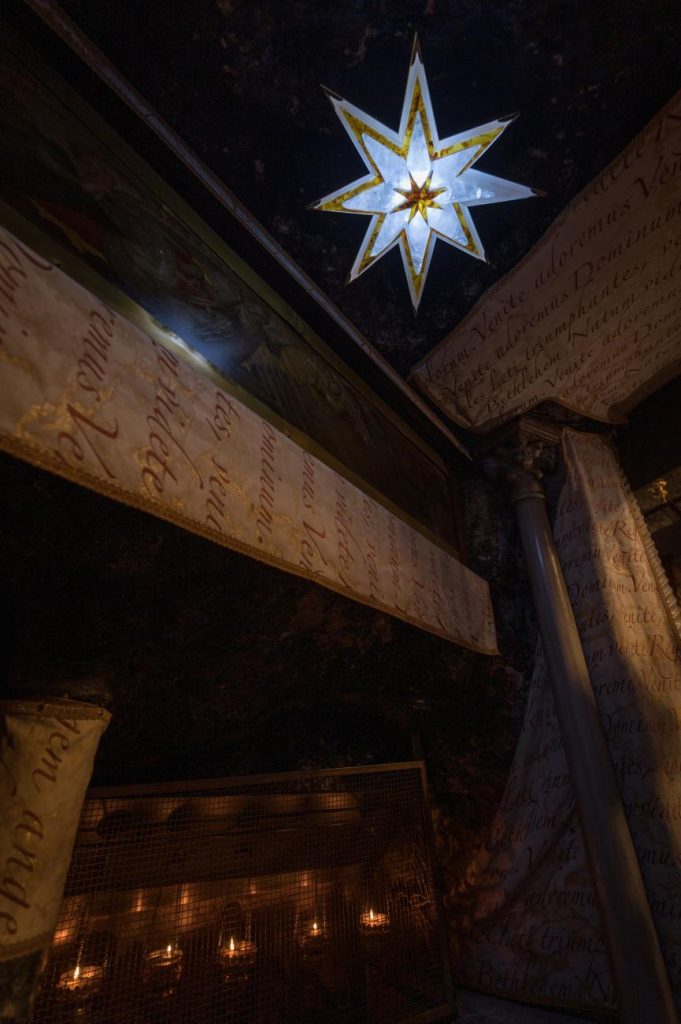 23 November 2022, Bethlehem, Palestine: A star shines over candles burning in the grotto under the Basilica of the Nativity in Bethlehem, where Jesus is said to have been born (Photo: Albin Hillert/WCC)

“In our culture, it’s all about community,” Saleem states. 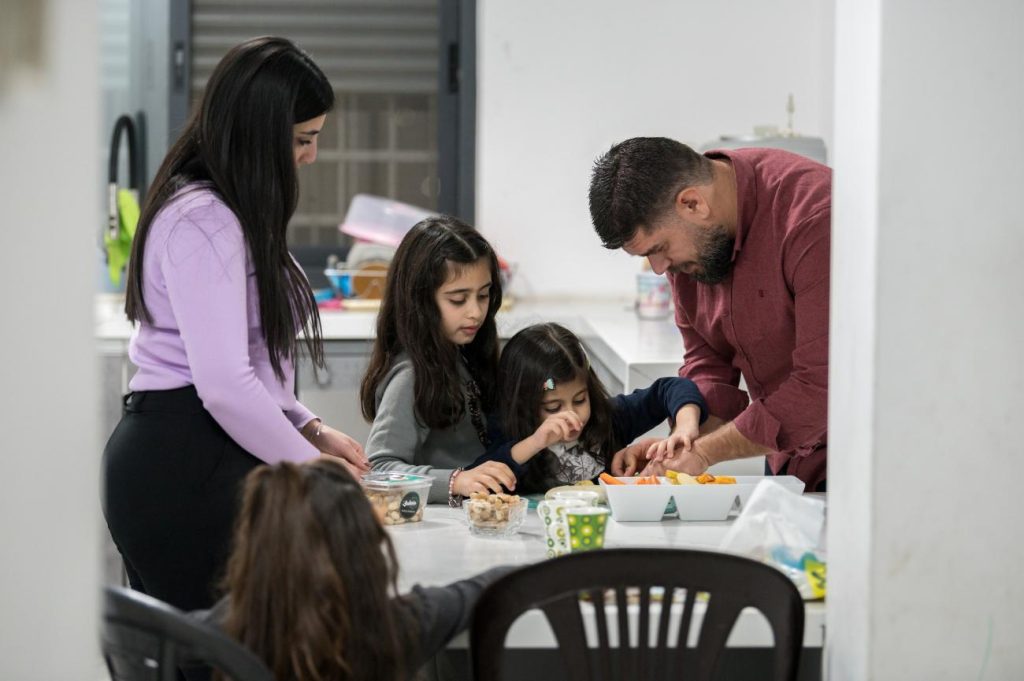 The bitter taste of military occupation

At the same time, the effects of ongoing military occupation of the West Bank do not go unnoticed even at Christmas.

Bethlehem is a city sealed off from otherwise nearby Jerusalem by a concrete wall stretching 8-9 meters up into the sky, carving its way through the land and sealing off access for anyone without a specific permit to cross. 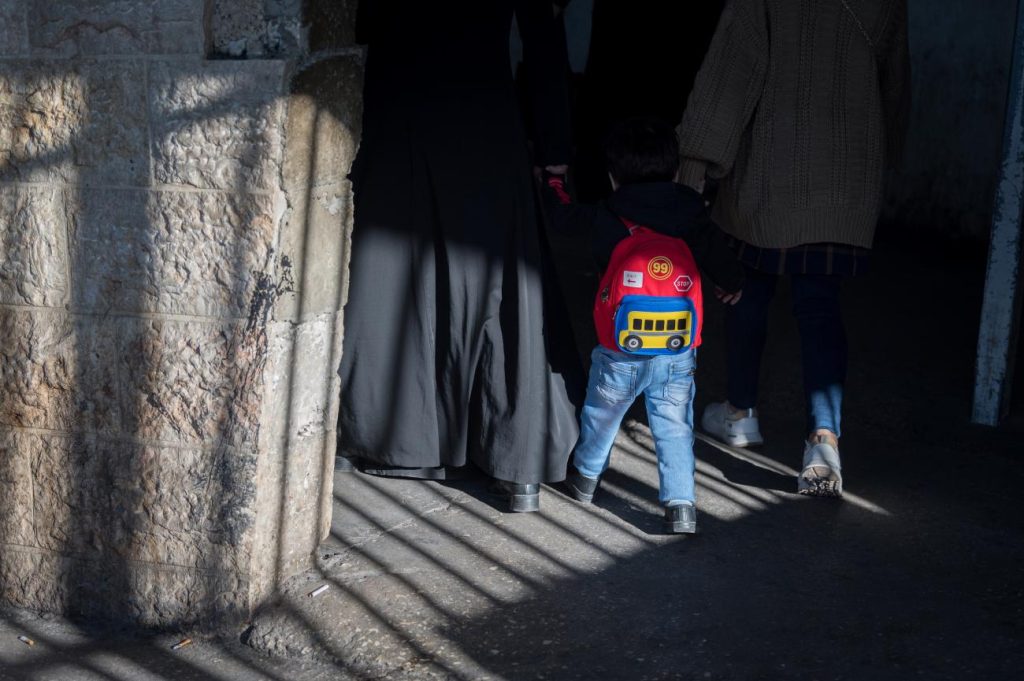 And while Christmas itself has in the past meant Palestinians can get ‘holiday season’ permits to visit Jerusalem as part of their celebrations, Saleem says, this hasn’t happened since the arrival of COVID-19 in early 2020. 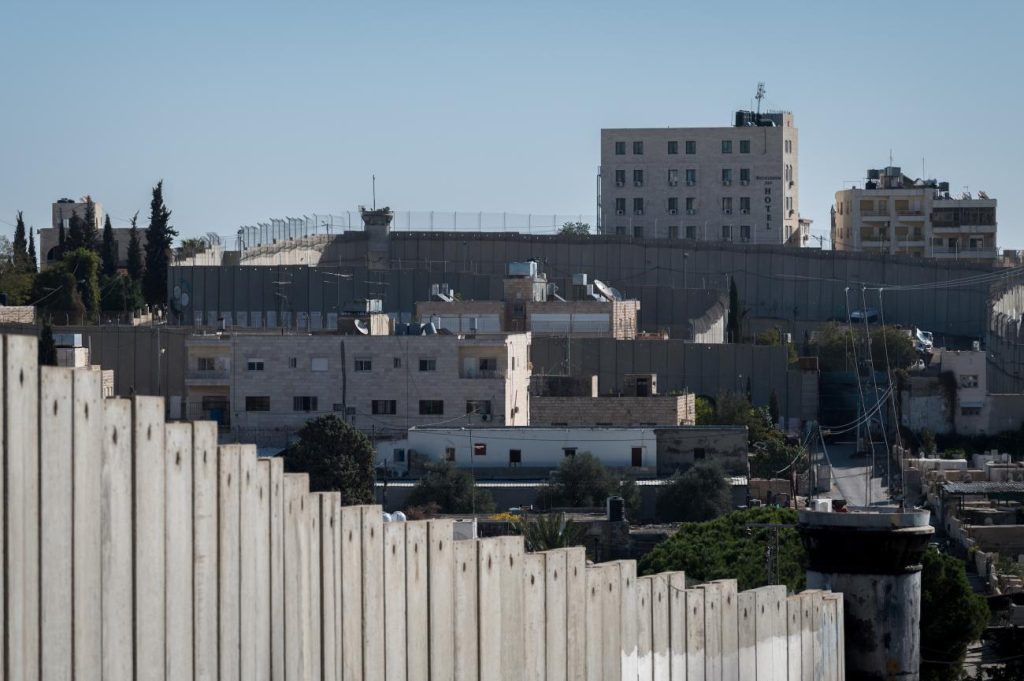 23 November 2022, Bethlehem, Palestine: The separation wall, built by Israeli authorities to block off the West Bank, carves its way through the edges of Bethlehem, separating the city from Jerusalem, and blocking access for the Palestinian people (Photo: Albin Hillert/WCC)

Some way further down the road, the Aida refugee camp – established in 1950 to house Palestinian refugees – serves as yet another reminder of a conflict that after decades upon decades remains unresolved. 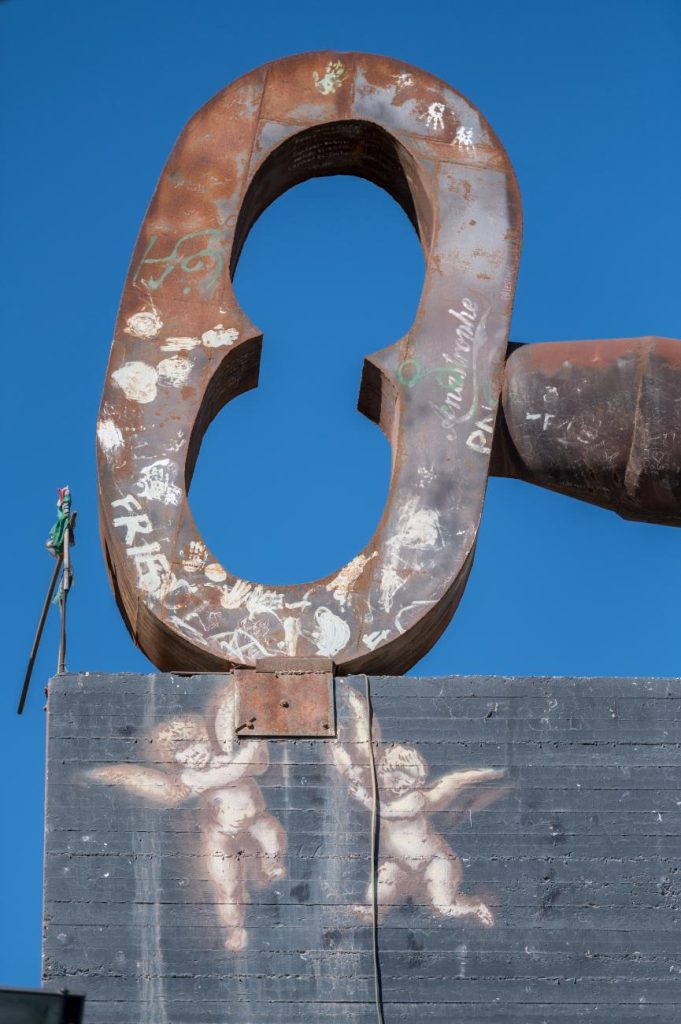 23 November 2022, Bethlehem, Palestine: Two painted angels hold “The Key of Return” at the entrance to the Aida camp, established in 1950 by UNRWA and located between the municipalities of Bethlehem, Beit Jala and Jerusalem. As Palestinian families originally moved into the camp after fleeing their homes, many of them carried their keys with them, thinking they would be able to return shortly to their homes (Photo: Albin Hillert/WCC)

And reality is that life under occupation has ramifications for Christmas preparations too for Palestinian Christians. 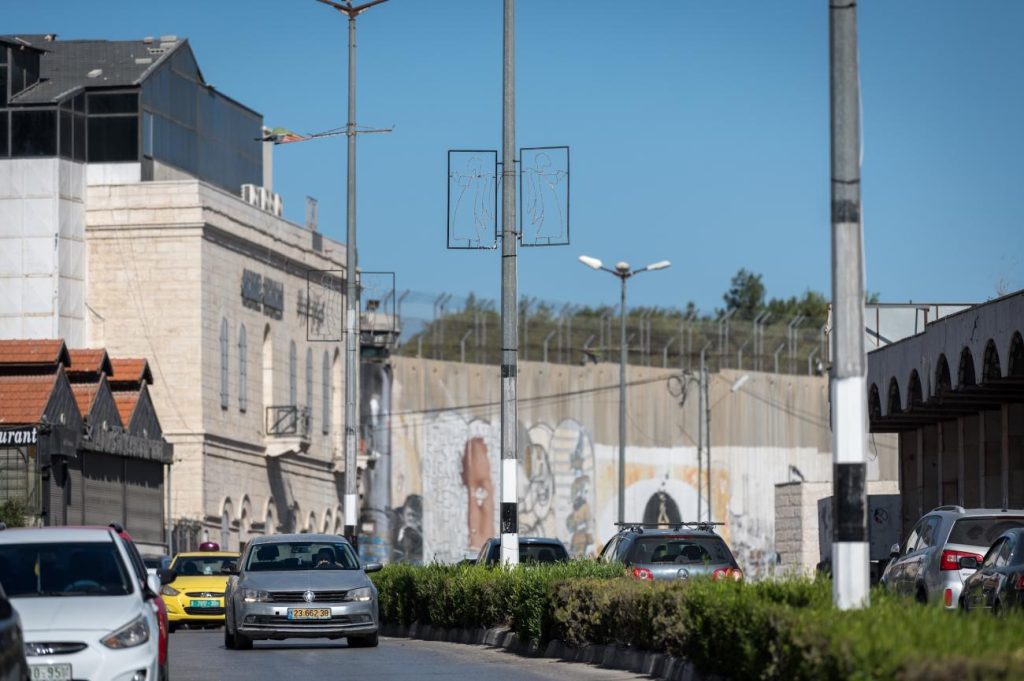 23 November 2022, Bethlehem, Palestine: Christmas decorations mounted on a road in central Bethlehem, pictured with the separation wall in the background (Photo: Albin Hillert/WCC)

“We really love celebrating Christmas,” Saleem says, “but in the past, if there has been what we could call a major political event happening around Christmas, or around any other holiday, we know that as Palestinians we need to come together to take a stand, and this has meant that celebrations in Palestine has been cancelled or postponed. How could we celebrate when we know that other people in this same country are suffering?”

“So even as we prepare for Christmas, we don’t know if we can actually celebrate,” he concludes. 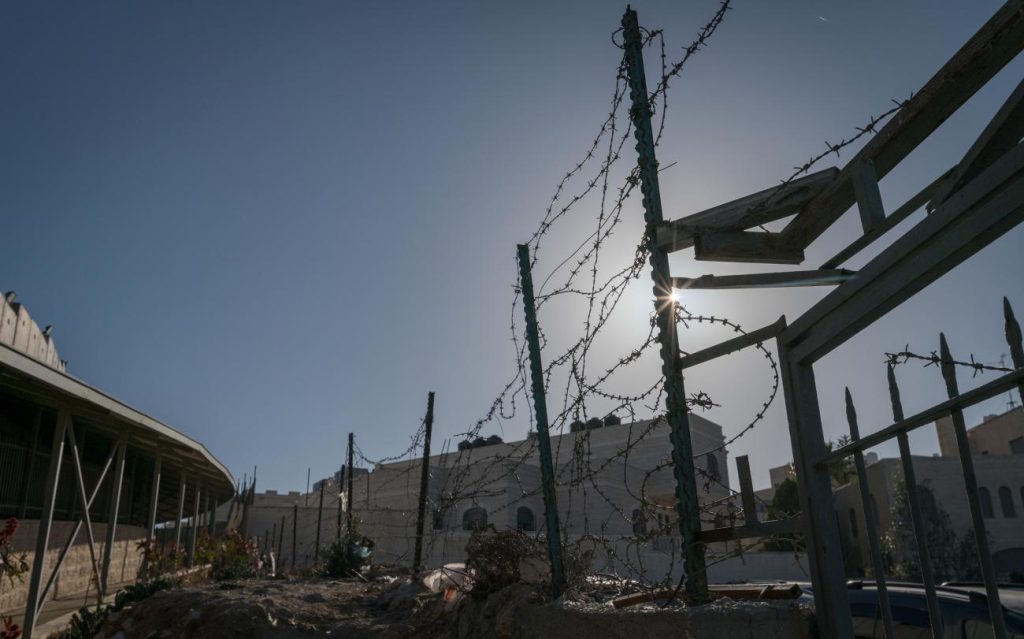 23 November 2022, Bethlehem, Palestine: The sun shines through a section of a fence at checkpoint 300 in Bethlehem, which separates Bethlehem and the West Bank from the city of Jerusalem (Photo: Albin Hillert/WCC)

First published on the World Council of Churches website on 8 December 2022.