Meet Matthew Dalton from The Southport School and find out about his current projects and plans, his thoughts on National Reconciliation Week and “Being Together: Embracing Joy”, his spiritual journey and his secret skill

The Very Rev’d Dr Peter Catt, a constituent of Trevor Evans MP, and The Rev’d Peter Moore, were forced to slip their climate action requests under Evans’ Albion electoral office door after they were locked out during their Australia’s Overshoot Day vigil on 23 March 2022
News

Queensland Anglicans marked Australia’s Overshoot Day today with bell tolling across the south-east and a vigil outside the electoral office of the Assistant Minister for Environmental Management the Hon Trevor Evans MP, calling for effective climate action by 2030

Holmes is where the heart is

“I’ve been a part of many teams in my life, but the one I am most proud of is my family…I do give a big credit to carers out there, big credit to those guys,” says North Queensland Cowboys rising rugby league player Valentine Holmes, as Anglicare partners with the NRL for the second consecutive year 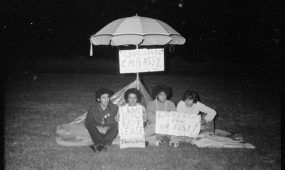 “Despite growing up in Canberra, I only first heard about the Aboriginal Tent Embassy in 1998 at the age of 22. During that year I was employed by an Aboriginal agency to tutor First Nations primary school children…At the end of the final tutoring session, the student’s parents thanked me with hand painted gifts, including a rock featuring the Aboriginal flag on one side and ‘The Aboriginal Tent Embassy 1998’ on the other,” says Reconciliation Action Plan Working Group member, Michelle McDonald