8,500 hectares were burnt out in the worst bush fire we have experienced in our 32 years at our hermitage in the foothills of the Great Dividing Range west of Tabulam, Northern NSW. We have experienced a number of serious bush fires before this one.

This fire broke out in a terrible drought. The wet season failed to come this summer and we had had no significant rain for four months. The bush was extremely dry, with trees losing their leaves or dying. Our creek had stopped running a long time ago and our large water hole has been shrinking before our eyes with no relief in sight.

The fire started when we were sweltering in temperatures over 40° Centigrade (100°F). The fire crossed the Clarence River and the Rocky River and became three separate fires travelling in different directions due to strong and unpredictable winds driving each fire front.

At the time there was only one Brother at home, as the other two Brothers were in Victoria, representing the community. Twice in three days, Brother Howard had to evacuate the hermitage, opening all the gates for access to and from the property, release and provide as best he could for the animals, close the buildings and leave. At one stage when trying to assess the fire front down our road, he was confronted by a huge wall of fire that crossed a kilometre down the road and saw two neighbours who were fleeing for their lives. Since then we have learnt that in that stretch of our road five dwellings have been burnt out.

Learning of the bush fire, Brothers Wayne and Geoffrey cut short their trip and caught the first available flight home. Fr Mathew Jones, the Anglican priest at Ballina, met them at the airport to inform them that Brother Howard was safe, but not at the hermitage and they could not get back as the main highway was closed at Tabulam and our road was definitely closed. But Matthew’s nephew, Callum, was going to Tabulam that morning and could get them to his parents’ place until they were allowed back to the hermitage. However, if you know anything about the Brothers and their history, you will know there is no such thing in their lexicon as “you cannot”. To cut a wonderful story short, we were helped to find a way to get home by Richard Jones, the brother of Fr Matthew. Richard lives just across the Rocky River Bridge at Tabulam.

It’s difficult to explain the situation because of the steep terrain, the changeable winds and the complexity of the fire fronts threatening our place. On arriving home Brothers Geoffrey and Wayne discovered that another fire front from a different direction was threatening the buildings, the orchard, the beehives and the animals (both domestic and wild). Through a Herculean effort, they started to back burn to try to halt the fire. Later, two volunteer firemen, aerial water-bombing by helicopters and Brother Howard saved the place. The fire came within three metres of one of the hermitages.

People say the Australian bush is resilient and it is. But after the fire went through for a week or more after, we would hear loud noises as these wonderful old trees come crashing down to the ground making the earth vibrate with their fall. The land had been cleared before the First World War so there were only a few 150- to 200-year-old trees left. One weeps for these grand old trees – home to sugar gliders and possums, and nesting places to kookaburras, parrots and a myriad of other creatures. The bush has taken on an eerie, silent, lunar moonscape like a desert; with no birds and no forest floor creatures like quails, lizards or insects.

No human life was lost, including our own, thanks to our own effort and work over many years in preparing for bush fires and the support of the Rural Voluntary Fire Service. We cannot begin to express our love, gratitude, our tears and emotions, for all those both local and far away who have been there for us in a palpable way with their concern, friendship, and prayerful and practical support. 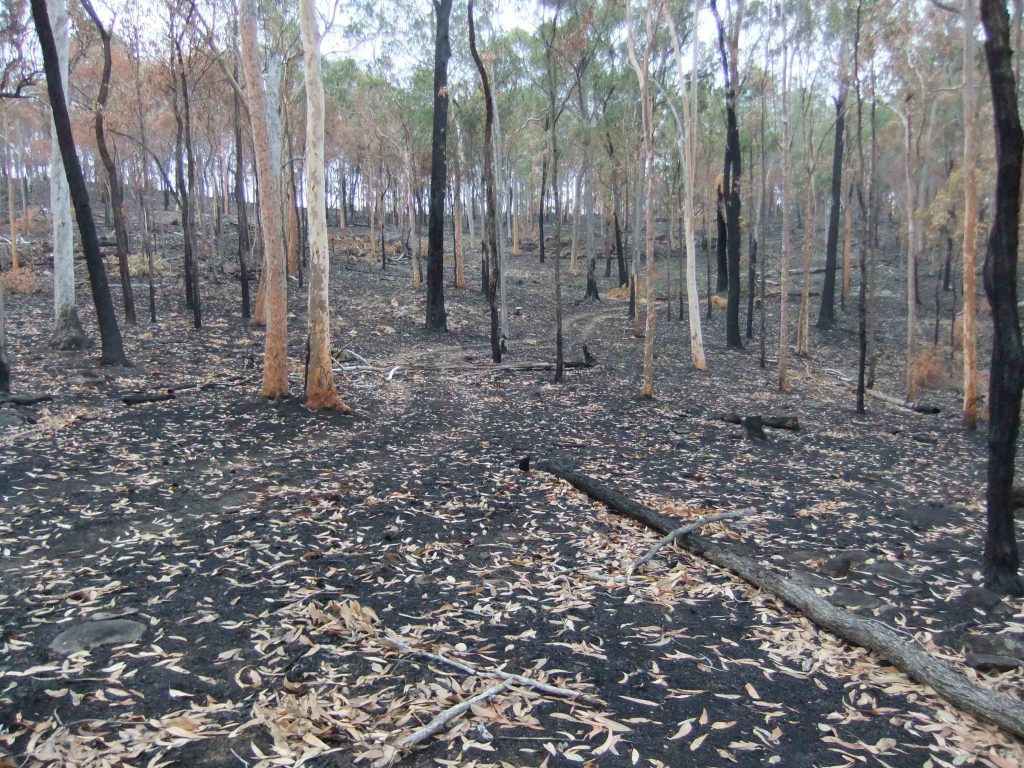 The eucalypt forest on the Brothers’ property after the fire

First published in the Bush Telegraph, a newsletter produced by the Little Brothers of St Francis.