At the Good Shepherd Church in Bundaberg West, we have a bit of an Australia Day tradition with a themed morning tea after church on Sunday, a few dampers, some lamingtons, meat pies and a couple of Australian bush ballad songs.

I often wonder if it is appropriate to reflect on Australia Day in the context of the church service, and I usually choose not to. I have made that choice in the past because I feel it does the church no favour to be too mixed up with nationalism and national identity.

I also wonder about the ‘change the date’ conversation. When I initially heard about ‘change the date’, my first thought was, ‘Why bother? It’s just a day!’ But, there are at least two problems with ‘It’s just a day!’ thinking. The first and most obvious is, if it is merely a day, then why not change it? The second problem is deeper –  that it is not just a day. Historically, 26 January marks the date that the First Fleet landed at what is now named Sydney Cove in Port Jackson, which for some people is the birth of modern Australia, and for others the day an invading nation landed. When the history of the day is considered, it becomes clear why celebrating Australia Day on 26 January is difficult for many people.

I then started to think about what Australia Day might symbolically honour. What are the values we are trying to renew and celebrate in this annual telling of our story? I am sure most people would use language like ‘mateship’, ‘frankness with the truth’, a ‘fair go for all’ and ‘easy going’. Some people would even point to a multi-cultural make up of our population, and a comparably flat class structure. 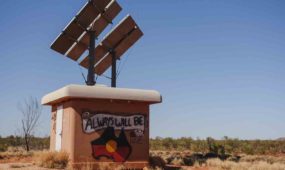 If these are the things we value, not just things we say we value, then applying these to the question of when we celebrate Australia Day means we would consider changing the date. These values have no direct connection to 26 January 1788, but should inspire us to greater empathy for our Aboriginal and Torres Strait Islander mates who hurt every year at this time.

I suspect that resistance to changing the date for Australia Day comes from people who have some or more of the following inclinations.

Some people, including me, have an instinctive reaction against change. This is often bolstered by a perception that the world is rapidly changing and we do not know where the change is going to end. I suspect this may be one of the reasons for a conservative approach to church life in general, as people desperately want certainty in a shifting culture.

Others no doubt feel a genealogical connection to the First Fleet colonists and do not feel like they are descendants of an invading force, but rather that Australia is their home and 26 January marks the start of that. They may feel as though they and their ancestors are being personally attacked by the ‘change the date’ conversation, and so are tempted to react rather than reflect.

All in all, I think changing the date would be the ‘Aussie’ thing to do. Doing so would best reflect our shared values of ‘mateship’, ‘frankness’, a ‘fair go for all’ and ‘easy going-ness’, by recognising the hurt for our mates, being frank about the history of 26 January 1788, being willing to give all people of this land a fair go, and being open to trying something different.

What are your thoughts?