When I was a teenager in the 90s someone gave me a book by Christian minister and sociologist Tony Campolo called You Can Make A Difference.

In his book, Tony challenges young people to “live lives of total commitment to Christ, to move beyond ‘warm fuzzies’ and good intentions, and to set a course for a lifetime of spiritual adventure.” At the time I actually thought that maybe he meant that one day God would make me a famous singer and use that fame to tell people about Jesus!

Well, I never became famous, but I have done a lot of singing. I have sung in pubs, markets, buses, schools and Cathedrals. I’ve even sung in a prison. But as far as my Christian faith is concerned, the rubber hits the road for me the most when I sing at prayer vigils for people seeking asylum as part of my Anglican Church Southern Queensland Justice Unit role and with Christian groups like Love Makes A Way.

One doesn’t have to be involved in prayer vigils for long to experience being yelled at for standing up for fairness and people’s right to live in peace and safety. These loudly expressed criticisms include “Get a job!”, “Go home, do-gooders!” and my favourite, “You won’t make any difference!”

However, my experience shows me that the collective efforts of individuals can make a difference. Every action, big or small, absolutely makes a difference! Last week, 50 men who spent nearly seven years trapped in Immigration detention on Manus and Nauru plus up to two years locked up in a Kangaroo Point hotel were released with a Bridging Visa into our community with no logical explanation from the department. This, along with the release of over 60 men in Melbourne earlier this year, is a result of years of mounting legal pressures from tireless lawyers (who challenged the Government’s cruel, unfair and arbitrary detention of refugees) and sustained advocacy from non-government and community-based organisations who rely heavily on the wider community for financial and other support.

In June last year Archbishop Phillip Aspinall showed his support by signing a joint statement by religious leaders regarding the men locked in the Kangaroo Point hotel, calling for the men at Kangaroo Point to be housed in the community where they can “live a life of human dignity while the processes around their future are followed through.” The statement shows that people of faith have a unique voice in refugee advocacy because we speak out of thankfulness to our “Loving God, merciful and gracious, abounding in love and justice, for the life we enjoy here in Australia, for our freedoms and prosperity”.

More recently other Anglicans from our community, including The Rev’d Canon Gary Harch from St Mary’s, Kangaroo Point; members of St Andrew’s, South Brisbane; and, The Rev’d Richard Browning from the Anglican Schools Commission have spoken up for the humane treatment for the men and their right to live in freedom and safety.

When we stand in solidarity with, and advocate for compassion for, people seeking safety we are embodying the Spirit of Christ. The Christ whose life, death and resurrection enable us to live the way God intended, where “the end is reconciliation; the end is redemption; the end is the creation of the beloved community” (The Rev’d Dr Martin Luther King Jr). 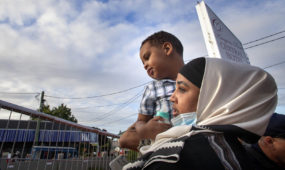 This is the Christ whose family had to flee tyrannical authorities and seek safety in Egypt because of persecution. The same Christ who inspires us, “To transform unjust structures of society, to challenge violence of every kind and pursue peace and reconciliation” (Anglican Mark of Mission)

The best news is that you don’t have to be an Archbishop to show support for refugees. You can make a difference, especially for fathers like Saif who hasn’t been allowed to even hug his young son and wife for three years, and for many others left behind at the Kangaroo Point hotel and at BITA.

Every phone call, email or letter to a Federal elected representative; every Facebook post shared; every conversation at home, in the workplace or at church; and, indeed, every prayer vigil attended can bring about a change of heart and influence the decisions of our elected leaders.

May we never underestimate the power of the Holy Spirit speaking through Christian voices, along with those of others who are also willing to stand up for fairness, transparency and compassion. Love will win.

Here are three ways you can join the local movement of compassion for people seeking safety, support refugees in practical ways and work towards the release of all the men being detained in Kangaroo Point and at BITA.